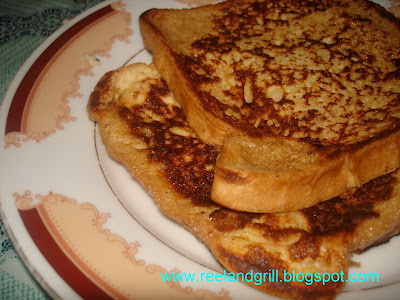 Our group’s usual breakfast, as prepared by our cook (company provided), for Tuesday and Thursday, composed mainly of bread, egg and fried sausage or hotdog or any other processed meat. While we all love fried eggs and hotdogs or sausages, sometimes we get the feeling that we desire different preparation for the ever reliable egg and bread tandem. For a change, I decided to make French toast one day. I have been craving for such for quite a long time and I thought is also an opportunity for me to post the easy yet very satisfying breakfast meal.

French toast, also called “eggy” bread or gypsy toast in UK, is a popular breakfast food in North America, Europe and Bermuda. Typically it is made with bread and eggs along with milk or sugar which are commonly added. Many other spices that are added in the cooking process are depending on the local cuisine or the individual’s preference. For me, I usually use cinnamon powder and/or vanilla extract to make a heavenly French toast. In general, this versatile dish is often topped with powder sugar, butter, fruit, syrup, jam, whipped cream, marmalade, cheese, bacon, marmite, treacle or honey to name a few. 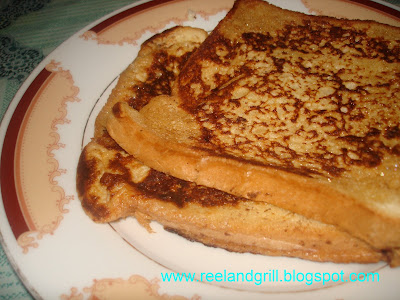 In making the dish, slices of bread are dipped in a beaten egg and sugar mixture. The egg-coated bread are then placed on a frying pan or griddle prepared with a coat of butter or oil, and cooked until both sides are browned and the egg has cooked through. The cooked slices are then served with toppings of your choice. I like cheese and ham or bacon for toppings. Butter and maple syrup could also work for me. :-)

To cook my version of French toast the following ingredients are needed: slices of bread, eggs, fresh milk, cinnamon powder, butter and any toppings you prefer. 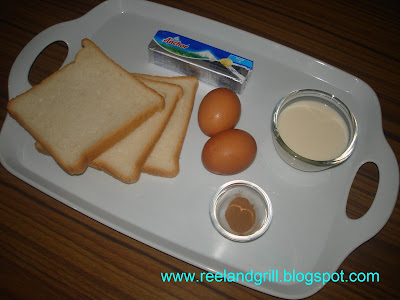 For easy understanding, preparation is presented on a per egg basis. You can double, triple, and so on, the quantities depending on the number of persons it is going to be served. In a mixing bowl, break one egg and beat lightly. Add ½ cup of milk and dash of cinnamon powder and whisk to mix evenly. If you like your toast to be sweet, you can add some sugar at this point and whisk again until dissolved. This egg-milk mixture is good for 2 slices of bread. 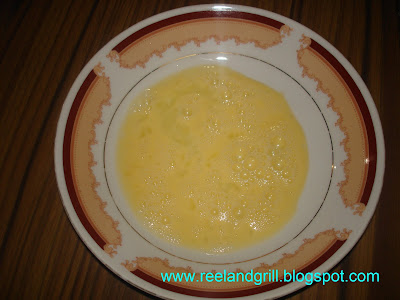 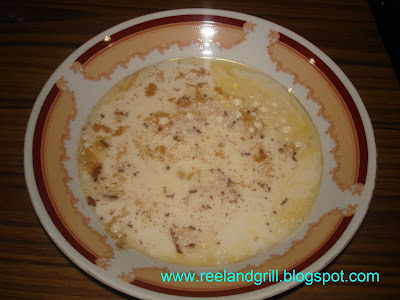 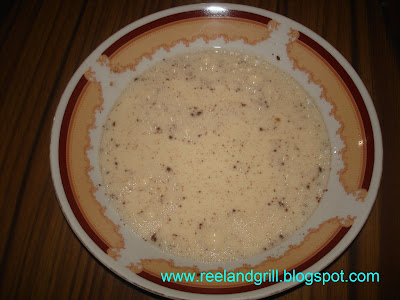 Dip both sides of the first bread in the egg-milk mixture until the bread soaked up the mixture. Meanwhile, in a non-stick pan, heat about 1 tsp butter. 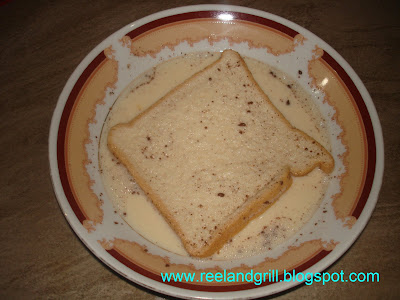 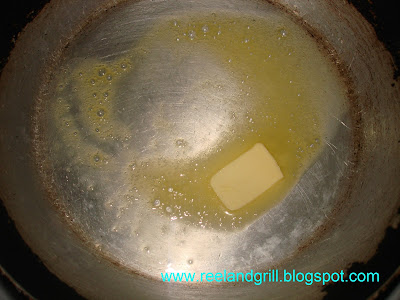 Fry the first mixture-soaked bread until golden brown and you can see marbled portions of egg mixture. Flip and cook the underside. Do the same for the other bread. Transfer the French toast in a plate and serve immediately. 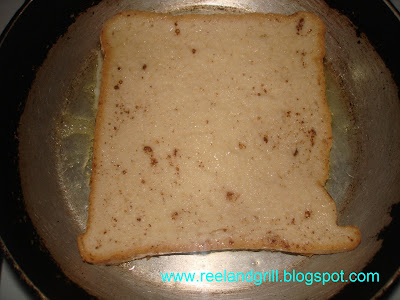 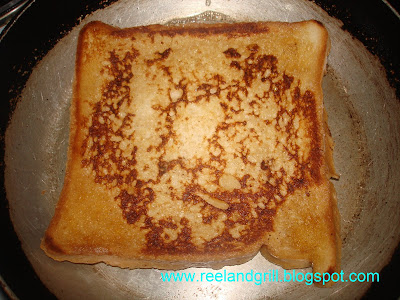 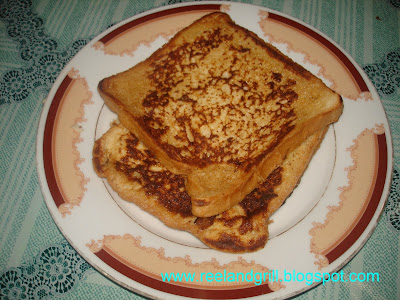 As I mentioned above, toppings depend on your likings. Butter and syrup is commonly available and thus it is my usual accompaniment for this wonderful bread–egg breakfast meal. Enjoy! It’s yummy! c“,) 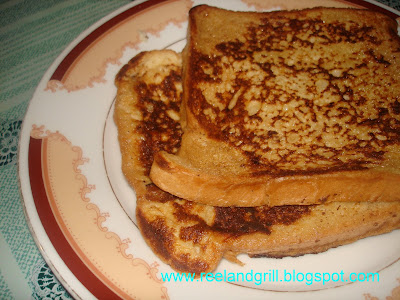 I better start teaching our cook to prepare this……...for some additional variations in his breakfast preparation. :)
Posted by Reel and Grill at 2:38 AM