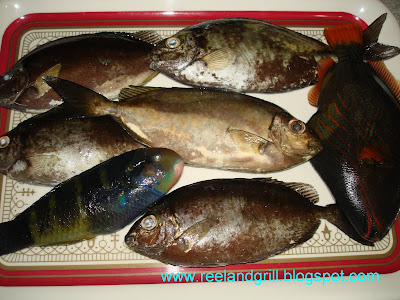 It has been a while since I last visited the Playground - the exciting fishing site I discovered mid of last year somewhere beside the protected diverse reef area of Bonnavista or Roumasalla, Galle City in Sri Lanka. The adventure I experienced there was in fact the subject of the first post, in two parts, of this blog entitled “Shore Fishing Under the Rain” Part 1 and Part 2. While I have returned to the Playground several times after that discovery, the prevailing monsoon period, that actually lasted until mid of December 2009, created huge and unforgiving waves that made the fishing site quite unsafe. I also posted one of the unproductive fishing trips under “Natures Way of Maintaining the Balance”.

Since it is already fishing season in the Southwestern Sri Lanka, the first thing I wanted to do since I returned from my short Christmas Holiday in the Philippines was to revisit the Playground. Last week, we had the opportunity to do it so I asked Rene, a new friend who prepared the “Kinilaw na Tanigue” I recently posted, who incidentally, also has a fascination with sport fishing and who loves fish a lot, to join me in the adventure. The plan was to leave our place early so that before the morning breaks, we are already wetting our lines. Fish are usually eating during that period so it is considered among the best times to fish. We intend to only fish until before noon, probably up to 10 am, to avoid the intense heat of the sun.

We arrived in the area quite early. It was still dark when we left our vehicle to hike down the scrub towards the shoreline. As always, the view of the place that appeared before us was magnificent. It is an untainted beauty of nature in its innate form. The place is really a natural refuge for the outdoorsman. 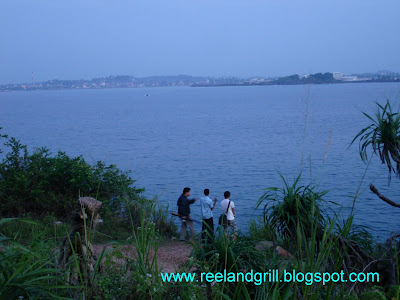 We immediately positioned ourselves in the Playground. We prepared our gears and tackles. We don’t want to waste any time as the crystal blue sea was serenely inviting. In a short time, Rene and our local friends were already casting shelled shrimp-baited hooks. I decided to try my luck popping and casting shallow diving lures. 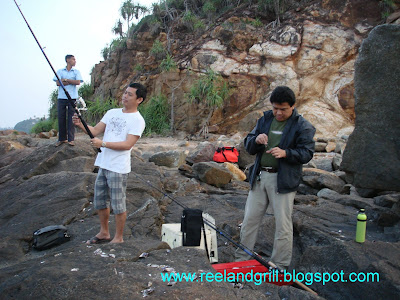 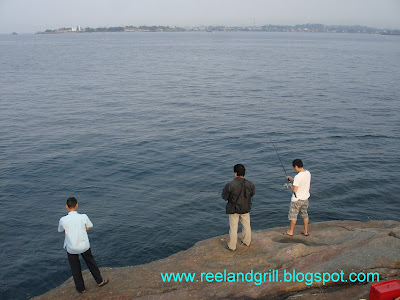 Casting lures did not make any progress. I had no strike even after trying different colors and types of artificial baits. I decided to join Rene and our driver and focused my attention to the reef fishes using chunks of shrimps and squid. Whilst we have been feeling a lot of bites and actually seeing school of fish swimming around in front of us, we were unable to hook any fish. As suggested by Rene, we decided to use smaller hooks and it paid off. Rene was so delighted to have the first catch of the day - a tasty spinefoot or “samaral” or “kitong” as known in the Southern Philippines. Quite luckily, he also had the second catch of a colorful wrasse or “mameng”. 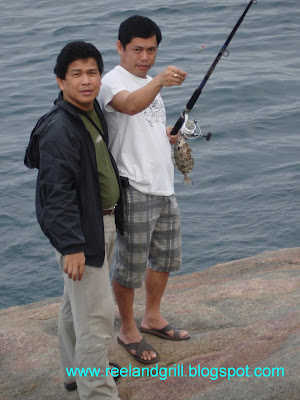 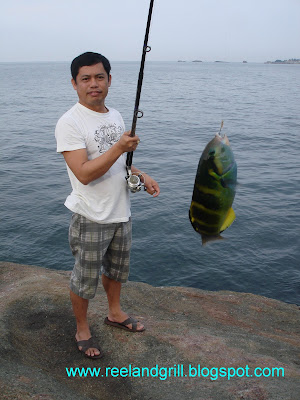 Our driver also managed to land one “kitong” that he hooked in the body and not in the mouth. :-) Only confirming there were lots of fish playing around. After more than an hour these were our modest catch but I still yet to get my first fish. 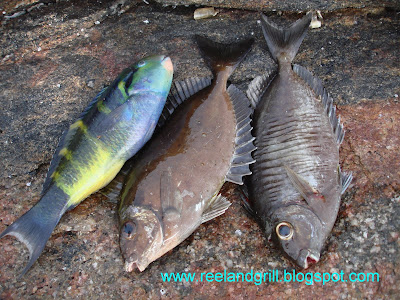 I persisted. Getting skunked is not part of the plan. Whilst we were having a great time and enjoying every moment even when the fish were seemingly outsmarting us and consistently able to steal the shrimp and squid baits without getting hooked, I am determined to catch fish. Badly! Finally, my prayers were answered, I landed my first catch…….bigger than the previous catch of Rene and our driver. The same “kitong” fish who’s probably among the school of fish feasting on our baits. :-) 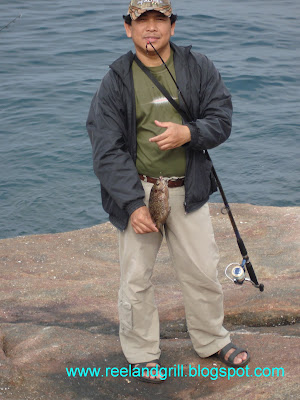 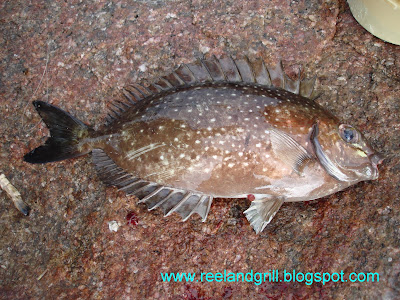 And then it was catching time. I managed to catch several more fishes. Even a sharp toothed “papakol” or trigger fish was landed. The great time just became a grand time. And we were overjoyed and extremely satisfied. :-) 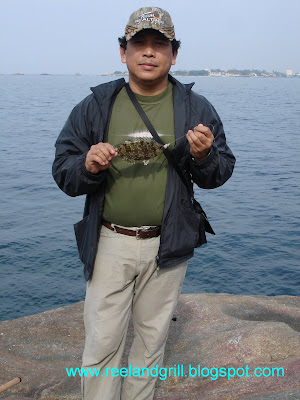 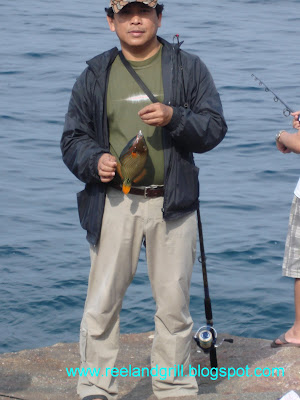 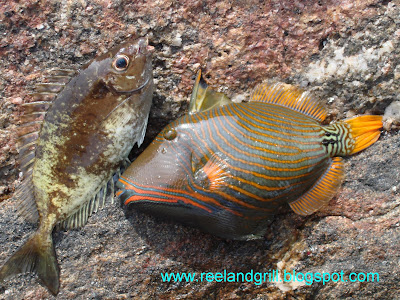 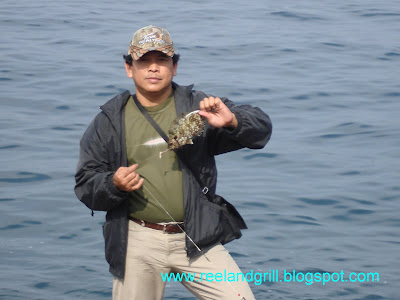 Just before we call it a day by around 10 am, Rene got a massive full from his rod. The hook and line easily gave to the fish but Rene saw the big fish just before it swam back to the rock. As Rene changes his terminal tackle, I immediately casted to where the fish was last seen and waited for a while. It did not take long before I hooked the same huge fish. It was very heavy, colored brown which I initially thought was a grouper of about 3-4 kilos. But my hook, too, was easily cut off. Yes, it was the hook that was cut by what seem to be a steel toothed fish. I was dumbfounded to see the remnants of my hook. Definitely it’s not a grouper.

I changed tackle and attached a steel line with a swivel in the end. In the swivel I attached a 1/0 hook and baited a large piece of squid. I immediately casted it to the same spot. The same stubborn brown fish took my offerings. I was happy and said to myself you are mine now. The fish was so massive, not really a ferocious fighter but very heavy. I was able to bring it up the surface to finally see it. It was a fierce looking not so handsome fish with a square jaw….a burrfish, probably birdbeak. It is known as the type of “butete” that can be eaten. In Samar where Rene lives, it is called “Tagutungan” and Rene swears it is one delicious fish.

But I was trying hard to land the fish my line snapped and the fish was again free in the water. I checked my terminal tackle to find out that my 1/0 hook was cut. The fish’s teeth are probably sharper than my long nose. As I changed my terminal tackle again, Rene casted his line with relatively smaller hook on a mono leader. The hungry fish again bit the offering and was at the end of Rene’s line. 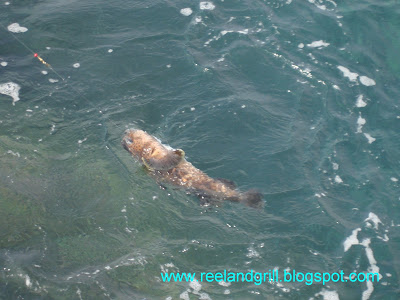 Rene took his time; slowly he dragged the then already exhausted fish close to the shoreline. Rene’s intention was to tire the fish and carefully lift it by hand from the water. How I wish I have gaff that very moment. Our driver eagerly helped Rene. We saw the fish almost gasping for air, trying to catch his last breath, as it was kept afloat the surface. Everyone was already excited, but our driver made a terrible mistake, instead of reaching out to the fish to grab and lift it, he pulled the line which once again was broken by the sharp teeth of the burrfish. And the fish slowly swam back to freedom.

We again tried casting several times in the hope of hooking the fish once more, but it was nowhere to be found. Probably after that near-death encounter it had, it decided to keep away from our offerings. Even the school of spinefoot fishes or “kitong” was gone. Since it was already past 10 in the morning and the heat of the sun was starting to hit us, we decided to call it a day. With several tasty spinefoot fish or “samaral” or “kitong” in the bag, we already had a fine catch. 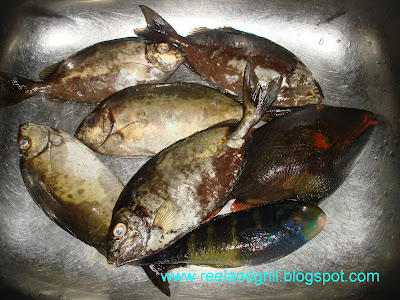 Before leaving the place we decided to eat our lunch first. The struggle with the burrfish likewise exhausted us somehow and we needed to load some food to regain our strength. What could be better than with steamed jasmine rice and a rich “humba” which I cooked the night before? And we ate whilst enjoying the scenic view of the Playground. 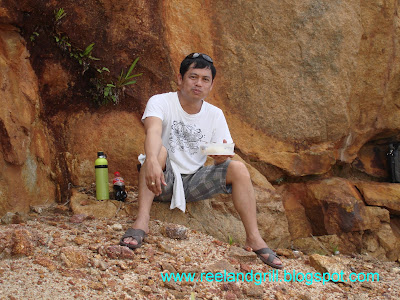 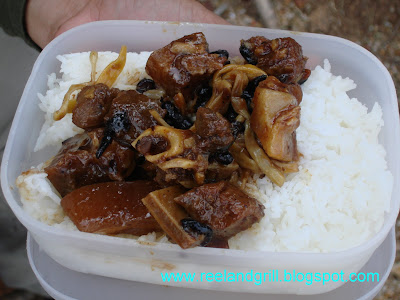 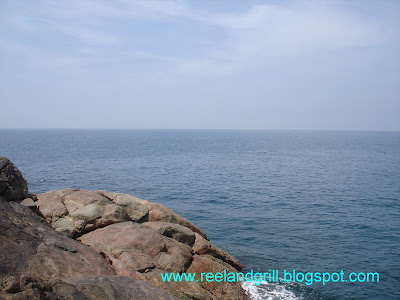 On the way to our vehicle, we once again enjoy the breathtaking view of the shoreline from the top. Can be seen from our vantage point was the Playground from the other side of the shore. It is really a gorgeous place. 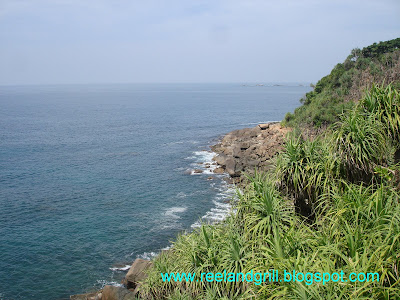 As we continued our trek towards our vehicle, we were already planning our return. The season will end by mid of April and we need to comeback whenever we have time. We only have 2 months to enjoy the Playground until the season ends and massive waves pound the place. 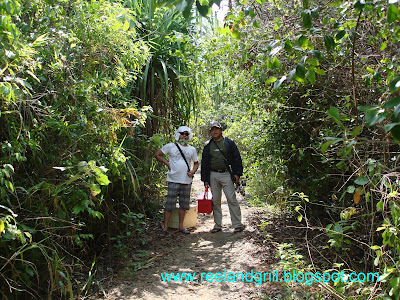 For all I know, the school of “kitong” or spinefoot and probably the burrfish will also be waiting for us for the fun to continue. c“,) 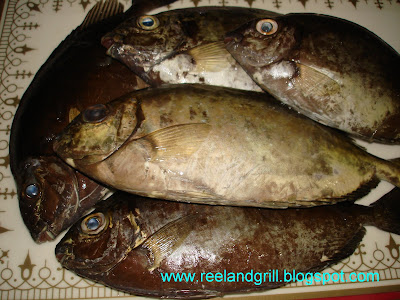