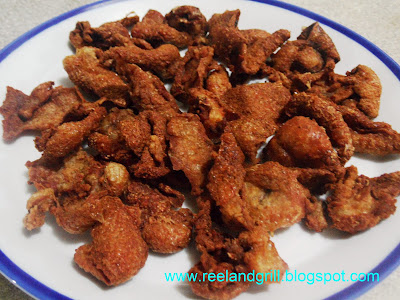 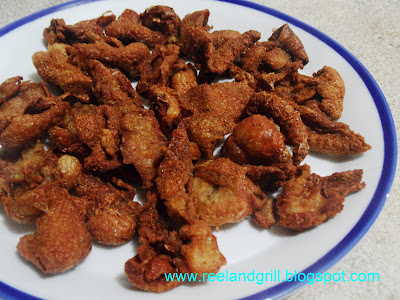 As a matter of preference though, consuming chicken without its skin is totally cool and is respected. In fact, it is looked forward by those who love “chicharon balat ng manok” like me as the avoidance results to easy availability and inexpensive supply of chicken skin in the market. Since lots of chicken cuts are now sold skin-off, there is a huge accumulation of chicken skin that provide a steady supply for the enterprising and adventurous Filipinos who know how and want to cook the otherwise discardable skin into mouth watering “chicharon”.

Supermarkets of Sri Lanka are among those that sell more skin-off chicken than cuts with skin-on. We believe they just throw away or feed the skin to pets as they do not have “chicharon” around here. But what’s even more exciting is that we soon found out that the butcher and crews are actually more than willing to give us, and I mean for free, some of the chicken skin that they collect when we inquired about what they do with them. :-)

For the dish, the 400 grams of fine chicken skin, thoroughly cleaned and washed, is our ticket to finally prepare the poultry version of “chicharon” which procedure we shall be sharing here so that you too can prepare it within the comfort of your kitchen, just in case you are not appalled by it. :-) 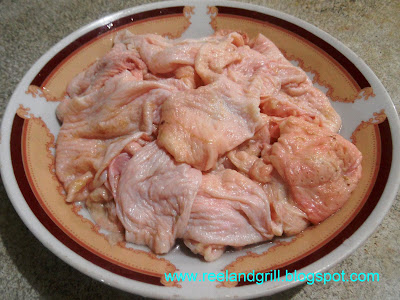 The few other ingredients needed are as follows: 2 tbsp fish sauce or “patis”, 1 small onion, peeled and quartered, 1 small carrot, peeled and cut into small sizes, ½ tsp whole peppercorn, ¼ tsp MSG (optional), 1½ cups water, 1½ cups vegetable oil for deep frying (or the oil collected from boiling the chicken skin if you like) and some homemade “chicharon” seasoning made up of iodized salt + paprika or chili powder + MSG which I featured in my “chicharon bituka” post. 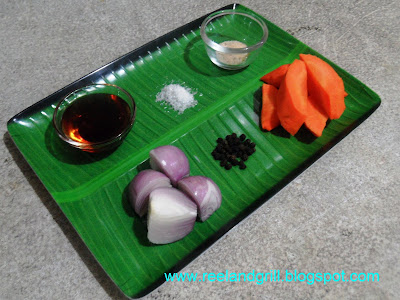 Like most “chicharon” recipes, the chicken skin must be boiled first until just tender before it is deep fried.

In a medium casserole, arrange the skin. Add in whole peppercorn and MSG (if using). Then add in onion and carrot followed by pouring in fish sauce and water. 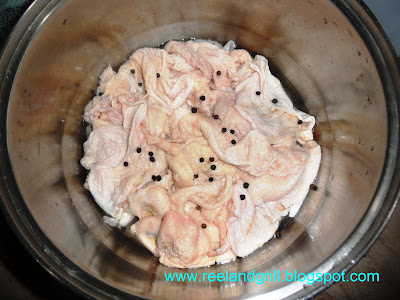 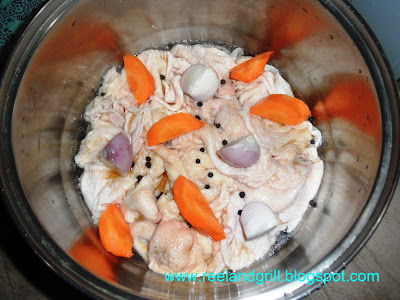 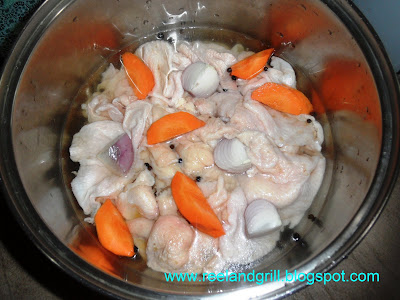 Simmer on medium flame until it boils. Adjust the heat to low and continue cooking with occasional stirring until the skin is tender and oil has rendered, about 25-30 minutes. 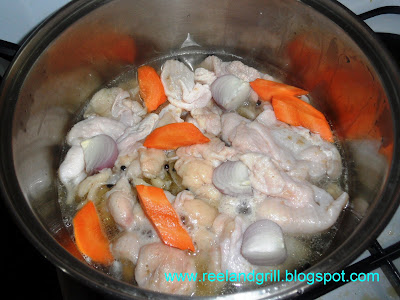 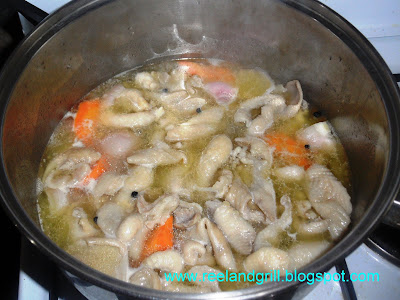 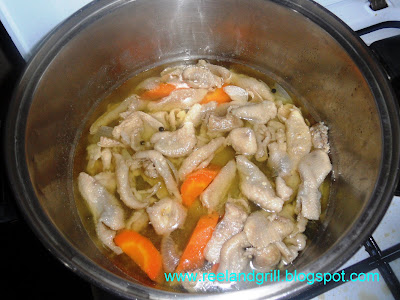 Let it cool for a while. Using slotted spoon, collect the skin and transfer in a wide tray. Keep it in the fridge for several hours or overnight. 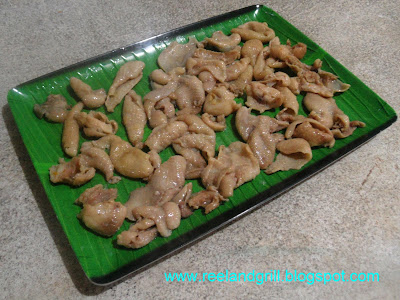 Expect the resulting broth to be very oily. You can either throw it away along with the other ingredients or like what I usually do, skim off the oil on the surface and reserve for deep frying. Alternately, you can continue simmering the broth on low heat until water has totally evaporated and all that’s left is oil.

When ready to deep fry, take out the skin from the fridge and separate the pieces from one another. 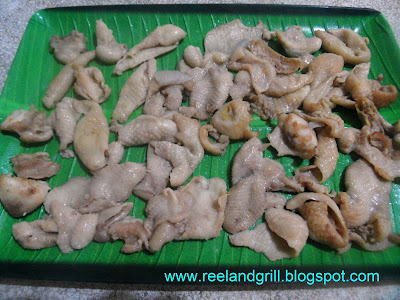 Heat enough oil in a small but deep wok or frying pan. When oil is really hot, carefully deep fry the chicken skin in batches until crisp and light brown in color. Continue frying with the rest of the chicken skin. 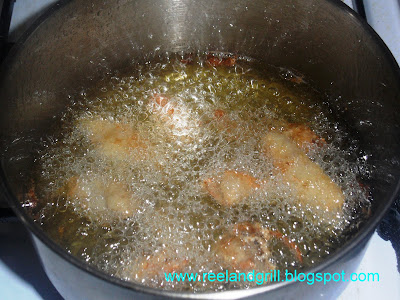 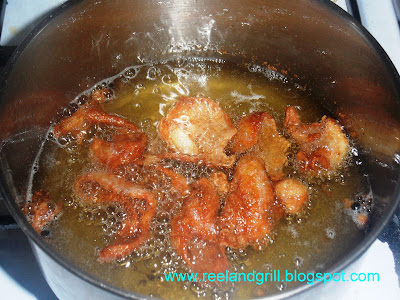 We don’t like it greasy so drain the excess oil using paper towels. Sprinkle it lightly with the “chicharon” seasoning if you still like. Sometimes the magical umami content of fish sauce is enough to flavor this “chicharon”. 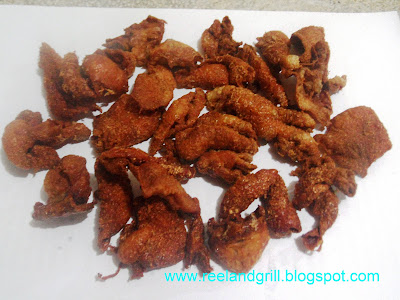 Transfer in a medium platter and serve with the traditional vinegar + chili + garlic + salt dipping sauce on the side. Truly yum yum! 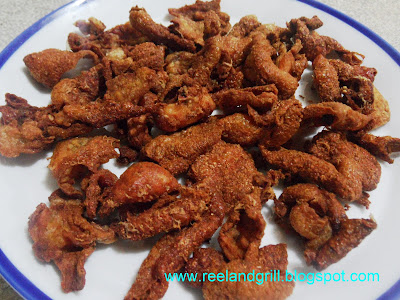 If you are starving, you can serve it with some fried rice and you’ll surely have a very satisfying meal …… courtesy of the lowly chicken skin. :-) 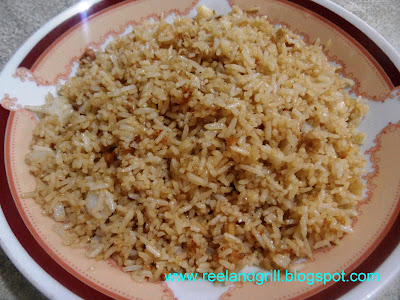 This is one tasty “chicharon” ……… superb as a meal starter or even a side dish in a main meal.

In the Philippines, this is a common “pulutan” or bites perfect for beer or any other favorite drinks with our friends or “barkada”. Enjoy! c“,) 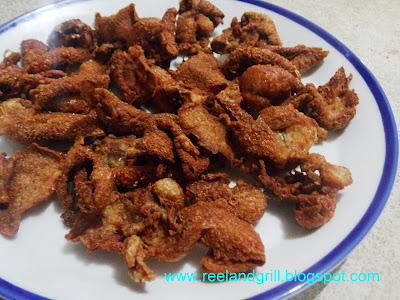 Posted by Cuisinegineer at 12:53 AM