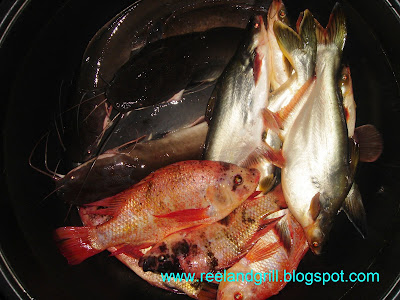 For truly dedicated and passionate sports fishermen or anglers, looming unfavorable weather condition at the sea or lakes will be the worst news to receive the day prior to any weekend. Such unwanted (to hear) reports have the capability to crush ones spirits and turn the world temporarily upside down. It is tantamount to the complete annihilation of a week-long (sometimes month-long) process of profuse planning, preparation, anticipation and imagination which unknowingly, has already caused involuntary excessive salivating, unnecessary drooling and spontaneous feeling of agitation not really curable even by the powerful combination of TV-watching, pizza-eating and beer-drinking moments at home. (But that would really help to lessen the agony ……… just so the wives know!) :-)

During such days when the sea or lake or river is not quite safe for venturing or at times when you are located quite far from any of them and does not have the liberty of time for some reasons or another, then the nearest available pay pond could be the angler's best friend ………… which we may not instantly realize is always there to save the weekend. No, it will not brand us already addicted to the sports. No way! That’s not the case. As I said above, we are just seriously passionate about it. Okay, okay, somehow we probably are. :)

You see, like most implements and tools, the cheap (as the wives thought) fishing gears and accessories need regular testing and commissioning for its continuous well and effectively functioning. Such investments although not really big (as declared to the wives) need ample quality time, constant monitoring and personal touch or over-seeing ……… so that it will incessantly provide us with priceless “returns” supplied in the currencies of “thrill”, “joy” and “fulfillment”. I really like saying that! :-) 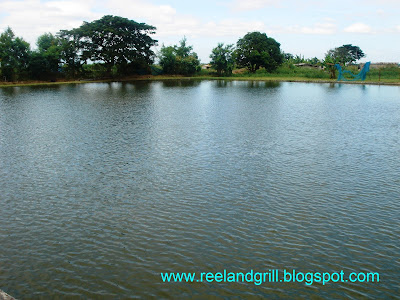 So, when I and my younger brother Bogs of the Tarlac Anglers were supposed to go trolling and bottom fishing in the vast and rich waters of Laiya, San Juan, Batangas (Philippines) but hindered by the prevalent bad weather, we changed plan to just visit the pay ponds in Apalit, Pampanga instead. The freshwater ponds are however not bad at all for they are thriving with huge African catfish, monster pangasius or dory fish, ferocious snakehead or mudfish, delectable kingfish and really large tilapia or Saint Peter’s fish.

With the game plan to land catfish or “hito”, pangasius or dory fish and kingfish (sometimes called “pla-pla” in the dialect), we headed to the relatively popular Apalit fish ponds which also serves as among the alternative refuge or haven of the Pinoy-Anglers. While the place is not really built for recreation and thus not equipped with comfortable facilities, the wide ponds' evident rich ecological aquatic life will not disappoint anglers who will come for the main purpose of catching fish. 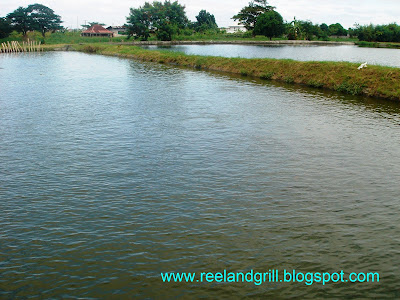 We arrived at the place with several anglers already casting. There were adult enthusiasts as well as father and son tandems already having fun and enjoying the moment. We noticed some of them have already caught huge catfish and pangasius, so we did not waste time. We immediately geared up and started casting dough ball bait in a Texas rig terminal tackle. It is the catfish who first took Bogs offering for just slightly forceful fight but anyhow stimulating. 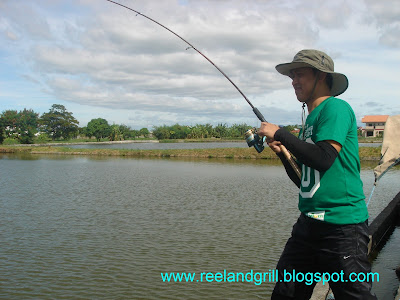 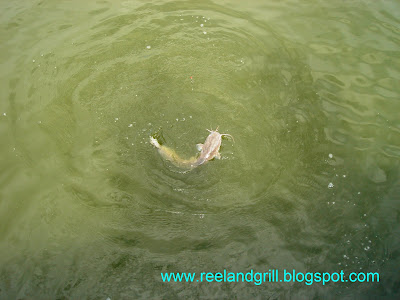 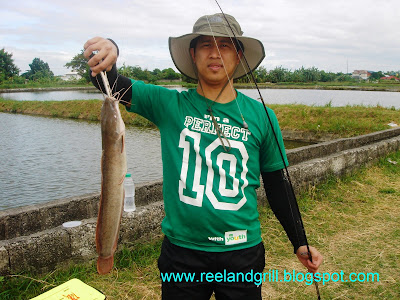 It did not take long for me to also have a sudden bite and experience the amount of resistance a less than 2-kilogram catfish could deliver thereafter. It was not really intense but still fun and enjoyable. Removing the hook and holding the fish for the photo ops was also thrilling as we are aware and in fact wary of the strong, hollow, pointed, bonified leading spine-like ray on the dorsal and pectoral fins. As a defense, these spines may be locked into place so that they will stick outwards, which can inflict severe wounds to unsuspecting or careless anglers. 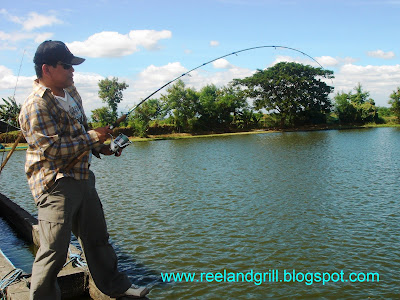 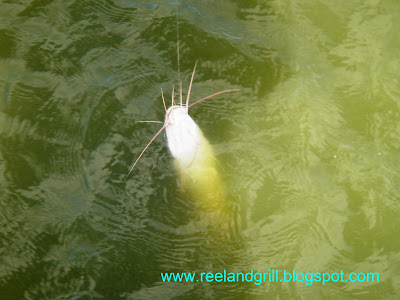 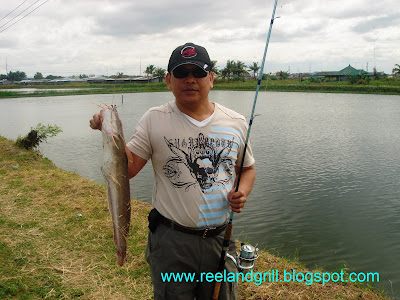 We continued to catch more and more catfish (many, especially the small ones were immediately released) but the “monster” pangasius or dory fish remained elusive. I was even envied by the boy next to me who caught a really huge one. :-( After two-long hours, we are yet to have our first bite from a pangasius and also kingfish. My brother Bogs decided to transfer to another pond which according to the caretaker has many pangasius but relatively younger and thus smaller. 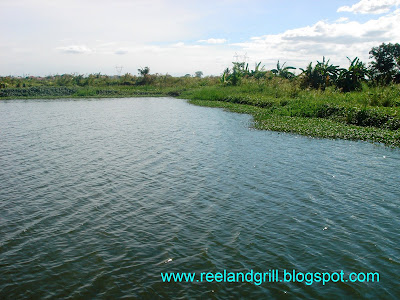 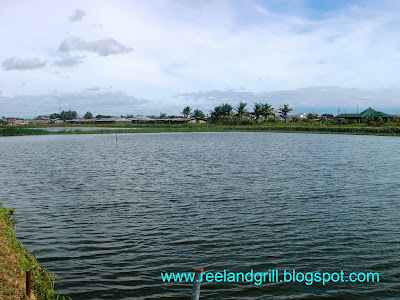 The pond-shift paid up ……… Bogs was soon fishing on ……… fighting ……… and after several gripping seconds, was reeling the fierce-looking and whiskers or barbels-wielding pangasius ……… not really huge but good-eating-sized fish. 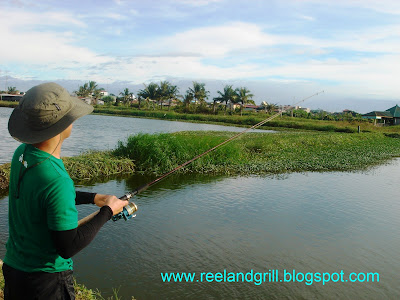 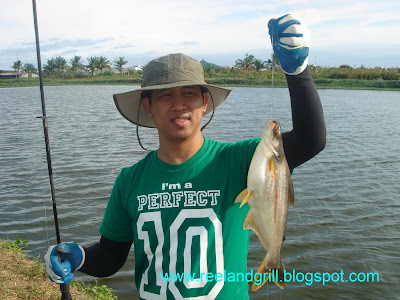 While I chose to stay in my pond for some more time in the hope to bag the mammoth fish like what the boy earlier caught, continuous bites of the seemingly insatiable African catfish proved catching pangasius even more difficult.

As the day closes to its end, I decided to try the pond where Bogs continued to catch smaller pangasius. It has not taken long before I too, was finally rewarded with the fat-bellied dory fish, also belonging to the order of catfish in reality. 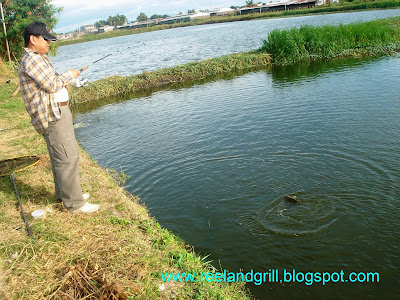 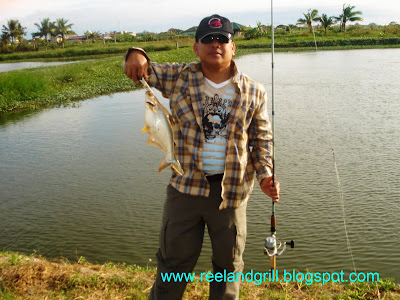 We caught several fish more, returned many smaller ones and decided to call it a day with 5 large African catfish and 5 good-sized pangasius in the bag and of course, an overly joyful heart. I know it should have been more fun if we made it to the sea but the pay pond is not any bad at all and in fact just saved the day. 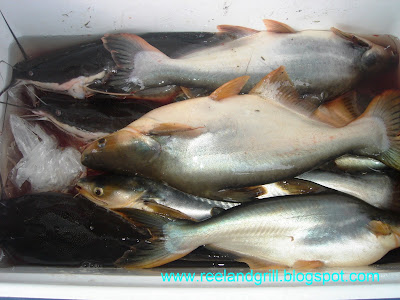 Since we were not able to catch the prized kingfish, the caretaker offered us some of the gorgeous fish which they caught earlier using nets and kept in the tank for anglers and other visitors who would want to sample its taste. It only confirmed that kingfish, though quite abundant, has gotten to be difficult to catch using rods and lines. With a very reasonable price, we took home some for the family. 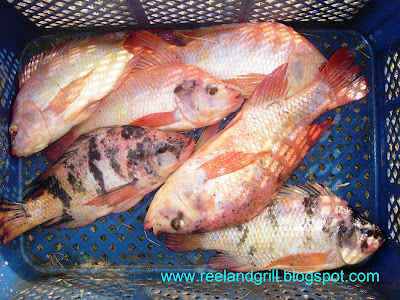 My father was most excited with our catch. He particularly like catfish especially large ones and he was thrilled with the fat pangasius as it resembles a fish which he has been enjoying during his younger years in Batangas ……… the “kanduli”, a type of freshwater catfish found in Taal Lake in the Philippines. 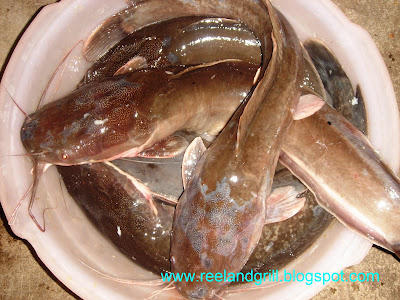 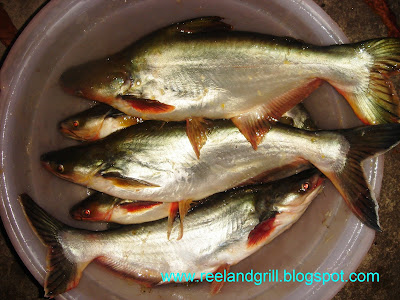 While the African catfish proved to be tasty fried or stewed, and the pangasius is nice to be prepared fish fillet and cooked as “sinigang”, the kingfish was the undisputed winner as table fare. It is the most delicious among the three which my son verified by easily finishing off one large piece in a single sitting during lunch. Yummy indeed! :-) 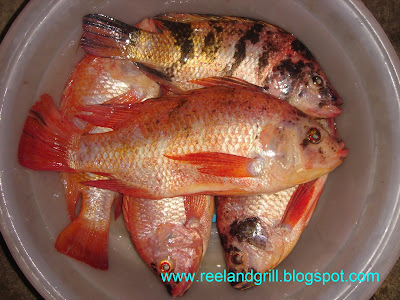 In times when saltwater angling activity is simply not doable for reasons of safety, hit the waters in your neighborhood’s pay pond, it’s also fun, exciting and capable of somehow relieving the “itch” ……… so they say. Hope you’ll enjoy the post! c“,)
Posted by Cuisinegineer at 12:12 AM