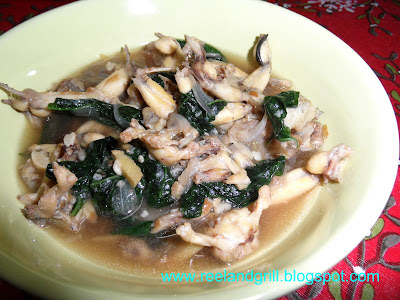 Edible frog and other eating-varieties of the tailless amphibians are still not a universally acceptable table fare in spite of its whitish or yellowish and relatively fine looking meat (maybe debatable), good taste and high nutrients contents. Even if French are eating about 4,000 tonnes annually, the Chinese and other East Asians such as Koreans, Indonesians, Vietnamese, Thais and Filipinos, to name just a few, contributing the larger share of the world consumption with several tens of thousands tonnes eaten yearly, frog will somehow still cause many to shiver (or faint if really squeamish) if served in a meal.

Probably, no amount of gourmet preparation would totally erase the culturally-inflicted impression that the moist, smooth-skinned and master-jumper animal, with its most important meat found in its powerful legs, is not an appealing culinary item, in general context that is. Perhaps, the thought that some of the most lethal poisons known to man are found in some varieties adds up to the culture of rejection of frog as a major food commodity. That while Indonesians are exporting several thousands tonnes annually and farm-raised frogs are now available in many countries, we are yet to see frog establishes a wide niche in the world food market.

As a backgrounder, frogs are amphibians in the order “Anura” meaning without tail. Most frogs are distinguished by a short squat body, webbed fingers or toes, popped out or protruding eyes and long and strong legs making them exceptional leapers. With permeable skin, frogs are often semi-aquatic or inhabit humid areas, but can move easily on land. They typically lay their eggs in puddles, ponds or lakes and their larvae, called tadpoles, have gills and develop in water. Frogs are most noticeable by their call, which can be widely heard during the night or day, mainly during the mating season. 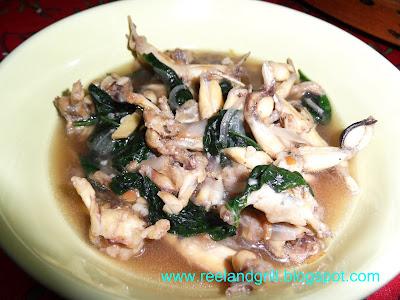 There are two varieties of edible frogs usually found in the wet markets of the Philippines and other Asian nations. The native farm frogs sometimes called rice field frogs or “palakang bukid” (in the Philippine language) and the larger type called Chinese edible frog or East Asian bullfrog or Taiwanese frog locally known as simply bull frog.

Both varieties are usually sold live to assure freshness but you can ask the fish monger to dress and clean them to have it ready for easy cooking at home. You don’t want to turn your fine kitchen into a mess doing the dressing of very slippery and fast-jumping animal (also translated “can easily escape unskilled handler”) there by yourself and end up running after some of them the whole day. :-) 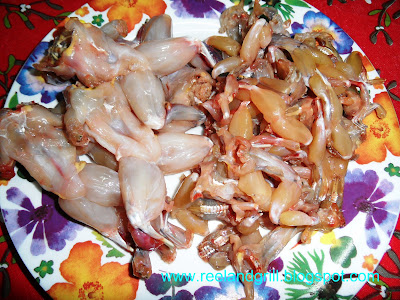 In the Central Luzon region of the Philippines where frog is a popular delicacy, it is commonly cooked as “adobo”, fried, “sinampalukan” or stewed in tamarind and quite uniquely as “betute” or “batute” which is basically fried stuffed frog. The possibilities are even made endless by the launching of the yearly Frog Festival in the City of San Fernando, Pampanga where contest for new ways to cook them is among the most anticipated events.

Those who are regularly eating frogs will almost certainly have one way to describe its taste as “it pretty tastes like chicken”. For these reason, frog is also good to prepare as “tinola” or stewed in ginger following the recipe of the widely regarded ultimate Filipino chicken soup called chicken “tinola”. 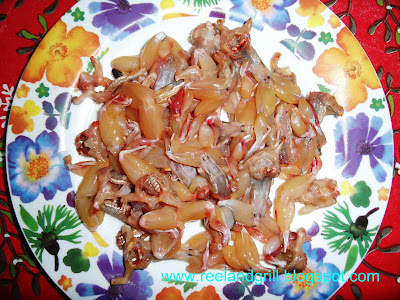 For the above quantity of dressed native or rice field frogs (about ½ kilo live), we need the following ingredients: 1 thumb-sized ginger, peeled and cut to strips, 6 gloves garlic, peeled and minced, 1 medium onion, peeled and chopped, 1 tbsp fish sauce or “patis”, ½ tsp ground pepper, ½ tsp salt or to taste and 1 bunch young chili leaves. Additionally, we need about 1 tbsp vegetable oil for sautéing and about 2 cups or enough amount of chicken broth or hot water to cover. 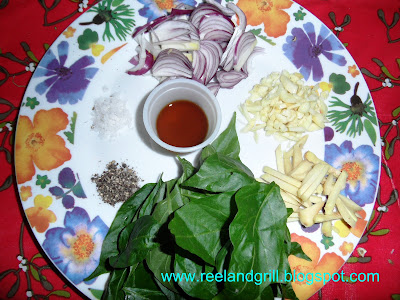 In a large pan or thick casserole, heat the oil on medium flame. Fry ginger followed by garlic until slightly browned. Add in onions and continue frying until translucent. Add the fish sauce and continue sautéing until fragrant. Add in frog meat and cook until it is partially cooked through and the meat is basically sizzling in oil. 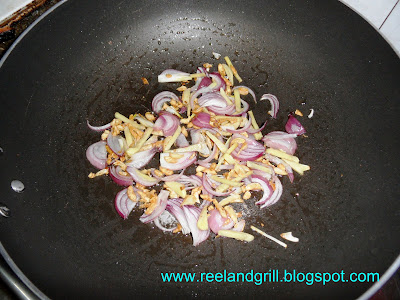 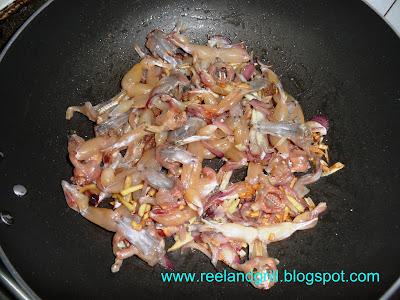 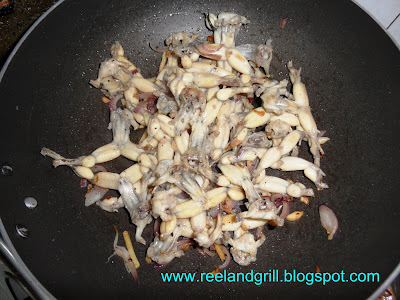 Pour enough chicken broth or hot water to cover and continue simmering until the meat is just tender. Season it with salt and pepper. 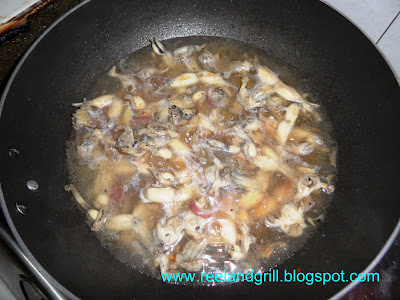 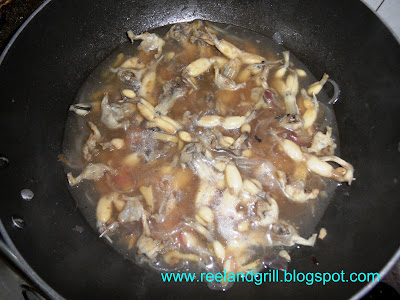 Continue cooking until the meat is basically falling off the bones. Adjust the seasoning and level of broth according to your preference. Finally, add in chili leaves, put the lid back on and turn the heat off. It should be ready after a minute or two. 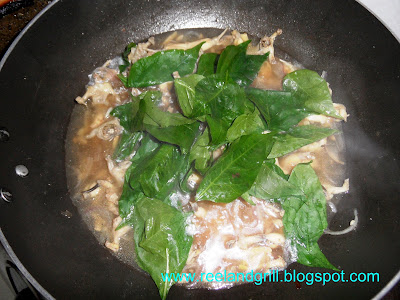 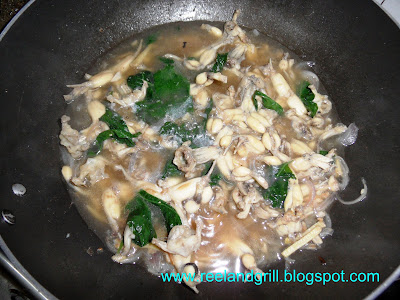 Transfer the dish into medium bowls and serve piping hot with lots of steamed rice. Like the common “tinola”, it best accompanied by a “patis” + calamansi + chili dipping sauce. 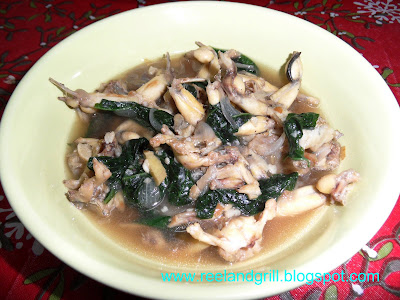 The aroma infused by ginger and chili leaves complements the deep flavor of the frog in this soup dish. I ate it alongside fried bull frog and it is such a sumptuous and satisfying meal. A rather froggy but really tasty meal. Try frog on your next cookery. Enjoy! c”,) 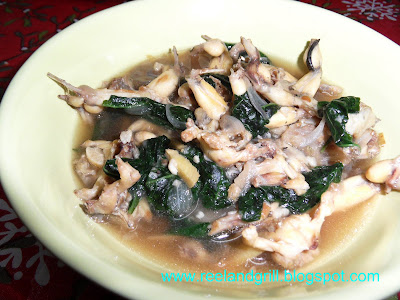 Posted by Cuisinegineer at 3:13 AM