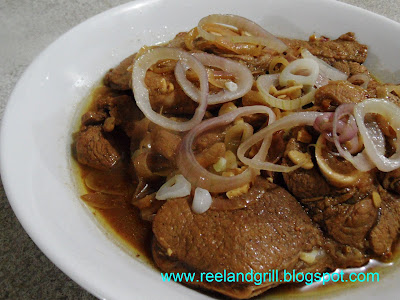 I know I am still yet to feature here the popular beef dish called “bistek”, a type of beef steak prepared the Filipino-style, but I have already shared a fish variation of the entree in my post “bistik na bangus”. While I remained unable to post the real thing, allow me to first share the equally tasty version prepared using pork. Like its mother dish, pork “bistek” is also delicious and a highly preferred all-time viand of most children ……… like our kids ……… most especially when it is my better half who cooks it. :)

Prepared using just a few basic ingredients which you normally have in your pantry, “bistek” is an example of a relatively easy and yet very tasty meat dish. Provided you used the right quality of meat as to tenderness (sirloin, tenderloin or any cut of steak like chuck, flank or skirt for beef and pork loin, tenderloin, pork chop or even the shoulder cut called “kasim” in the Philippines for pork) then a fine “bistek” is half way assured.

Among the various pork types suggested above, my preferred cut is pork loin. It is a cut of meat created from the tissue along the top of the rib cage of a pig. It is usually grilled or baked in the United States where it is very popular. While I usually find pork loins sold fresh in either thin slices or roast cut (called joints or legs in the UK although not really from the leg), they are also sometimes sold soaking in marinade for ready cooking back home. To prepare this version of “bistek” or pork braised in onions, soy sauce and “calamansi” or lemon juice, we settled for these really nice pork loin slices. 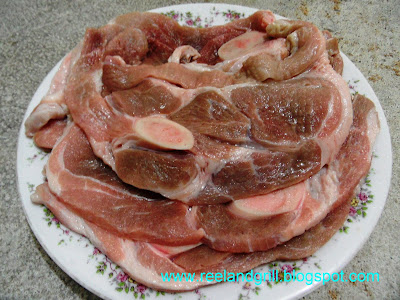 “Bistek” preparation involves marinating the meat prior to light frying and then braising. The marinade which also serves as the braising sauce is made from soy sauce balanced with “calamansi” (or lemon). The dish is flavored with lots of onions.

To cook the dish, we need the following ingredients in addition to the about 800 grams (2 lbs) pork sirloin shown above: 1 large onion sliced into rings, ½ cup soy sauce, 3 to 4 tbsp “calamansi” or lemon juice, 4 gloves garlic, minced, ½ tsp ground pepper and ½ tsp salt or to taste. Additionally, we need about 4 tbsp of vegetable oil for searing the meat and later sautéing and some water to thin the sauce. 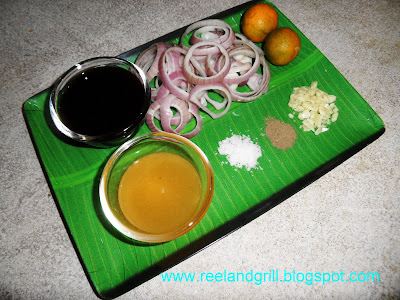 In a wide mixing bowl or container, combine the meat pieces with garlic, soy sauce, “calamansi” juice, salt and pepper. Add some MSG if you like. Stir to properly blend the flavor and evenly cover the meat. Marinate for at least 30 minutes to an hour inside the fridge. 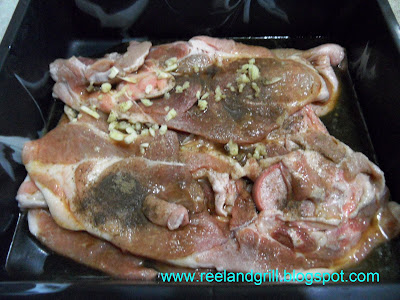 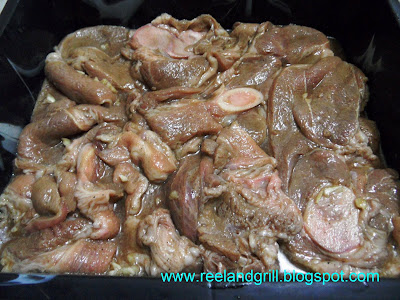 Flip the meat over several times to ensure even infusion of flavors into the meat. After marinating, slightly drain the meat but set aside the remaining marinade. Gather the garlic bits out and reserve as well. 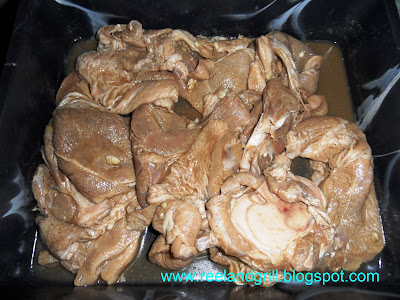 Heat the oil in a wide frying pan. Fry the onions until translucent. Remove from oil and set aside. 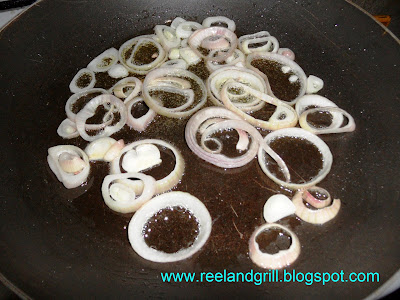 On high heat, using the same pan with oil, lightly fry the pork loin pieces in batches, effectively searing both sides of the meat. 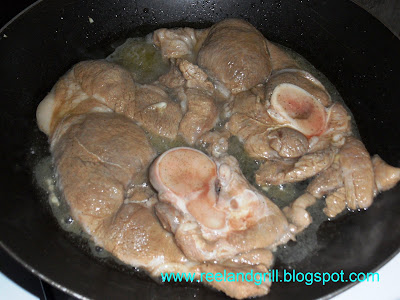 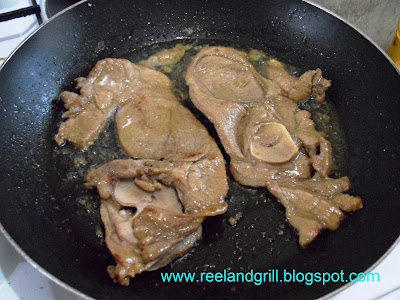 Continue frying until all meat slices are properly seared. Drain and set aside. 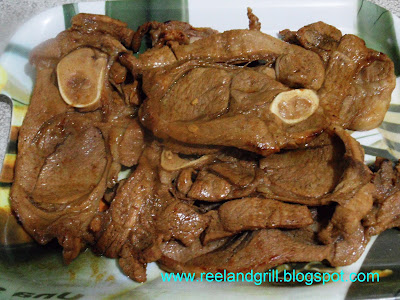 In the same pan with the remaining oil (add some if necessary), fry the garlic bits until aromatic. Add the reserved marinade and about half a cup of water and let it boil. Taste and adjust the amount of soy sauce or “calamansi” juice if you still feel necessary. Add half of the fried onions and continue simmering on low heat. 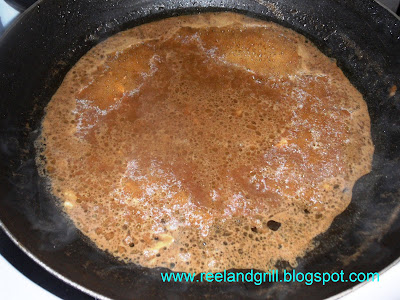 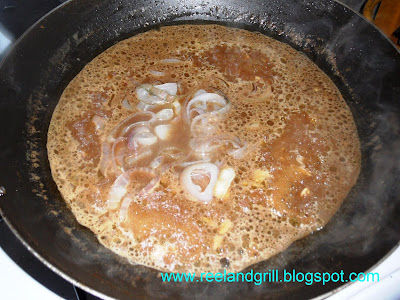 Add in the seared meat and continue cooking with the lid on. Carefully flip the meat pieces for even cooking. Continue simmering until the taste has properly blended and sauce is a little bit reduced. 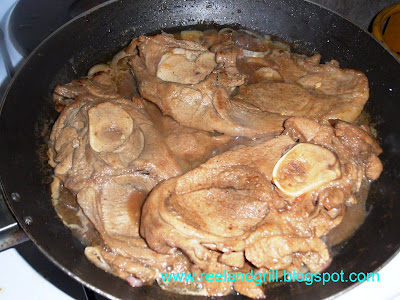 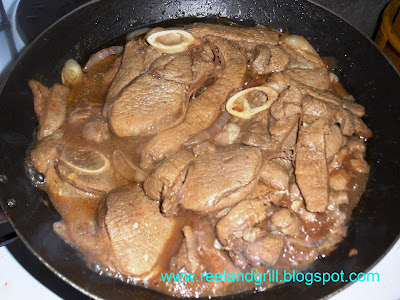 Transfer the meat in a wide serving plate, slather the sauce and top with the set aside fried onions. Serve immediately with a good heaping of piping hot steamed rice. Yummy! 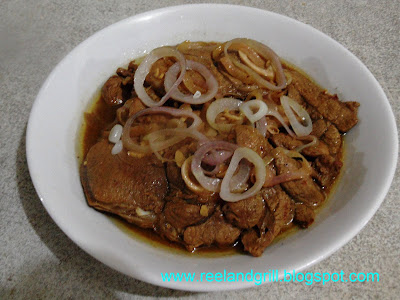 Our group ate this with some fried potato wedges and we had a truly sumptuous meal. Like adobo, there is something in “bistek” that could tend the unsuspecting dinner to somehow over-eat rice. :-) 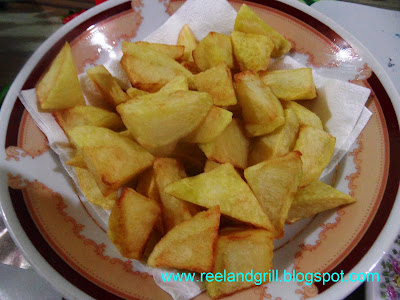 The sauce is just at the right blend of salty-sourly taste and it was perfect for slathering on piles and piles of plain rice. Whew ……… diet has been suspended! Enjoy! c“,) 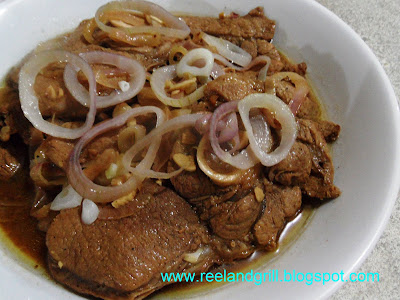 Posted by Cuisinegineer at 2:03 PM