Saltwater Angling in the Philippines (Trolling and Bottom Fishing) 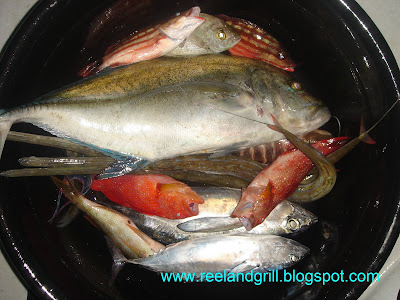 Angling or Sport Fishing is always a part of my itinerary whenever I am on vacation or holiday back home in the Philippines. This was also true during my short emergency leave last month. My younger brother Bogs and a cousin Allen, both of which are active members of the Tarlac Anglers, immediately arranged a saltwater angling adventure in our favorite fishing hole in Bane, Pangasinan. We have been fishing the same water for quite a long time, the latest of which was during the family-exclusive tournament last December 2009 which I posted here.

Since we only caught small reef fishes during that mini-tournament, the game plan this time is fundamentally to try trolling for the big and strong fighter fishes like giant trevally (GT) or “talakitok”, seerfish or wahoo or “taningue”, yellow fin tuna or “tambakol”, bullet tuna or “bonito”, great barracuda or “barakuda” and dolphin fish or “dorado”.

As a fall back however, we also set up and readied our medium-heavy gears for the reliable bottom fishing in the event that trolling will prove to be unproductive due to the cloudy and windy weather condition. At least with this method, we will be able to catch good tasting groupers or “lapu lapu”, coastal trevally or “talakitok”, snapper or “maya-maya”, emperor or “bugsi” and other colorful reef fishes. 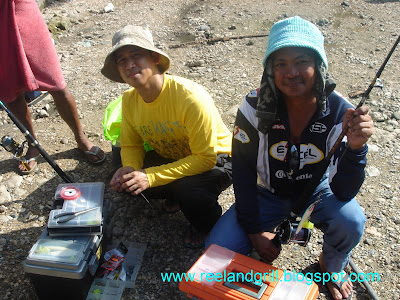 The fishing spot is a long 3-hour drive from our place in Tarlac City but unfortunately we were able to leave our house at a quite late time of 5:00 am. We still have to stop over in Alaminos, Pangasinan to buy live small shrimps for bait and some food and drinks provisions. We arrived in the tiny fishing village of Bane by 8:00 am.

As expected, our skipper and guides (“bangkero”) aren’t very happy with our time of arrival. Actually they prefer that we head to the sea as early as 5:00 am to have a better chance of catching good fish. But we never learn and just like the last time, we promised to come early next time. :-)

No longer wanted to waste time, we immediately set-up our gears. We scheduled 2 small boats, one for me, Allen and our guide and another one for Bogs and his boatman. 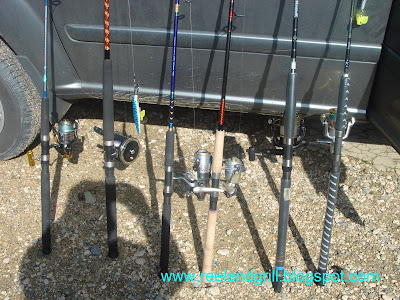 Each angler has two (2) ready gears, one for trolling and another one for bottom fishing. For trolling, diving lures from “Rapala” and other lure makers were used on a heavy tackle while for bottom fishing; live small shrimps called “swahe” were our preferred offerings. 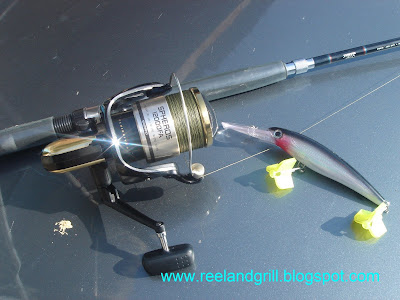 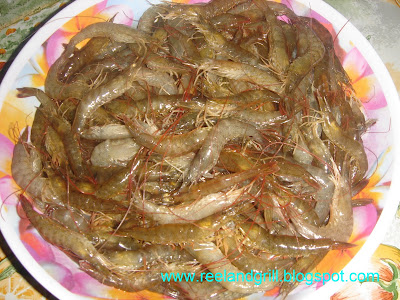 We divided our provisions, tackle and bait into two factions. I and Allen boarded the first boat with our gears and an obvious overwhelming enthusiasm. Bogs and his guide followed us after several minutes in the second boat. 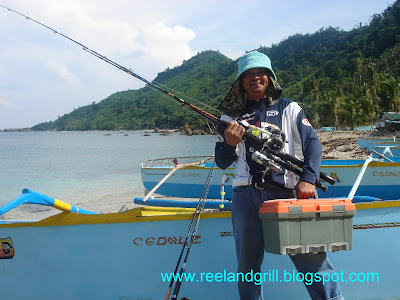 The sea is still calm when we started trolling the waters of Bane up to Bolinao area. We pretty much covered a long stretch of coastline waiting for that elusive strike of a huge pelagic fish. 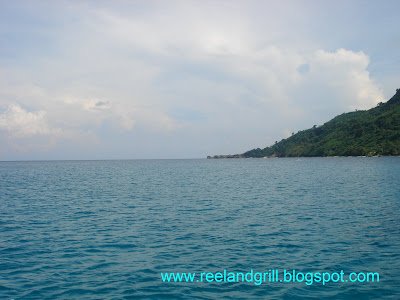 However, after several hours of trolling without strike, the weather abruptly changed. It started to rain and wind started to blow stronger causing big waves. Not a very good condition for me who likes to fish but can hardly handle motion sickness. 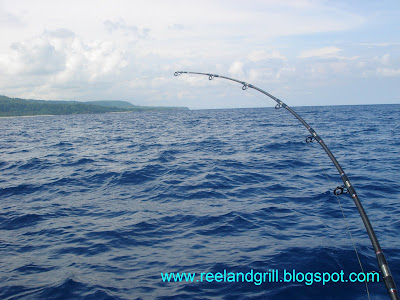 While we still have zero strike, Bogs has already landed a small bullet tuna which he happily showed to us from afar. We continued some more trolling but remains unlucky so we decided to shift method and carry out bottom fishing instead. Somehow the fun begins. We continued to catch grouper and emperor and other reef fishes. 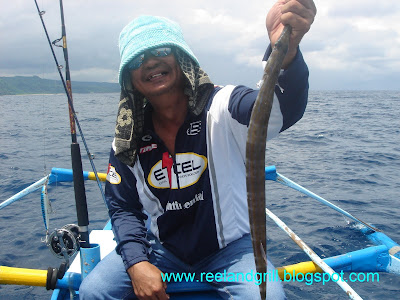 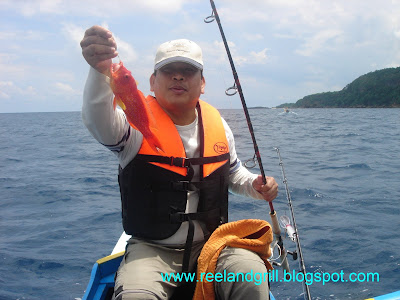 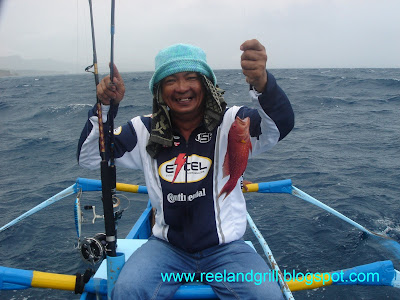 When the wave became bigger and I started to get dizzy, I asked the guide that we shift back to trolling. At that point, we also noticed Bogs doing some trolling again. We continued for about an hour but remained without a strike. We did some bottom fishing again and caught some more pan-sized fishes. Not long after however, we have to suspend the angling as I can no longer stand the sea sickness causing my world to turn upside down. I had enough and asked the guide to return to the shore.

There, we found Bogs already cleaning his gears and belongings. He excitedly showed us his priced catch of bluefin trevally or “talakitok”. It was such a beauty. It was thick, firm, massive and still bluish in color. 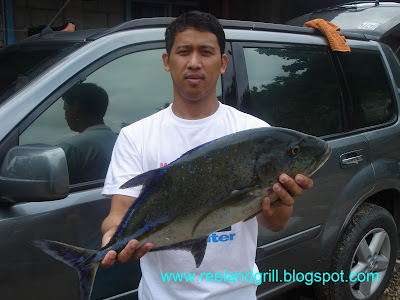 He also caught juvenile tuna and other reef fishes. He did not land grouper or snapper but he is apparently the big winner that day. 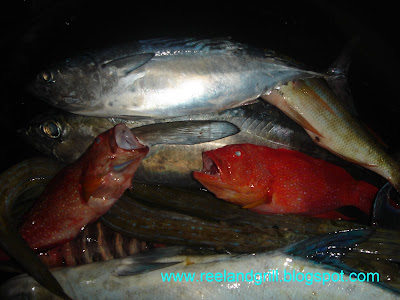 The biggest catch is of course the gorgeous “talakitok”. At least through Bogs, we were able to better our last performance in the same fishing hole. Whilst we are unlucky with wahoo and barracuda, the smaller cousin of GT had definitely made our day. 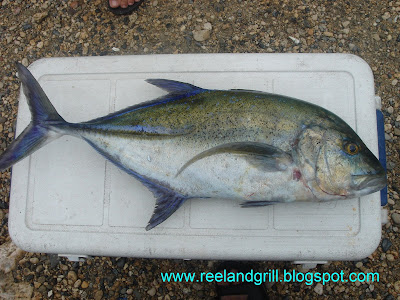 All in all, the fishing was fun and of course pretty successful. With a catch of nearly filling up our large cooler, we can not be happier……for the moment. The family for sure will also be satisfied with the catch that they will be eating for the next several days. Hope they will enjoy eating as much as we have enjoyed angling! c“,) 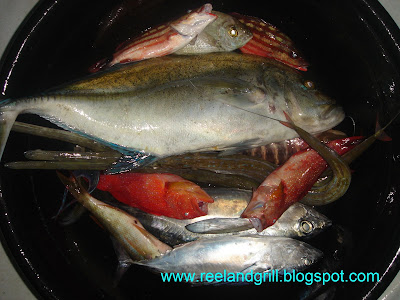