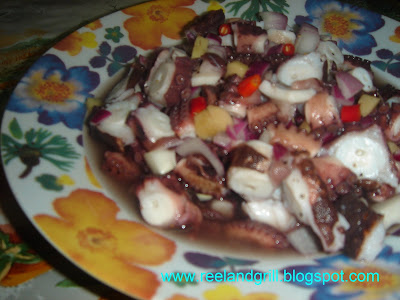 During the FIFA World Cup, Paul the Oracle Octopus was the biggest winner. After establishing a perfect, 8 out of 8, prognostication record, Paul became an instant international celebrity and a world sensation. Long after Paul is gone; its feat will continue to live in the memory of all football fans and players. After all, making a stir in the biggest sporting events of the world will leave a permanent mark in the mind and heart of all sports aficionados.

As a result of Paul’s rose to stardom, people now have higher regards to octopus as a magnificent animal, as an extra-ordinary pet, as an important part of the marine ecology and just hopefully, as a significant food item for the bulging world population and continuously depleting food supply, particularly from the bounty of the sea.

Belonging to the “cephalopod” class in the mollusk family, the octopus is related to squid and cuttlefish. Its rich diet of clams and scallops gives it a highly flavorful meat that although quite rubbery, is distinctly tasty and in fact, very popular in Japan and the Mediterranean countries. The Japanese way of eating them raw has amazed many people all over the world.

It can be eaten in several ways such as grilled, braised as “adobo”, boiled and pickled, sautéed, deep-fried, simmered or boiled for several hours and as usually done, marinated in vinegar or citrus juice and spices in the dish called “kinilaw”, a food preparation which is very similar to the “ceviche” of Latin America. 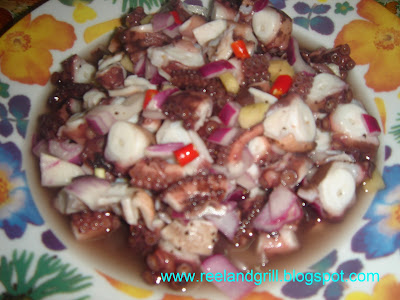 Octopus, known as “pugita” in the Philippine language, is available smoked and canned in some supermarkets in the US and other countries. In the Philippines, it can be bought in wet and seafood markets in many coastal towns and cities.

To be able to make a simple “kinilaw na pugita” dish, we bought some live octopuses from a fishing village in Bane, Pangasinan (Philippines) which our group, the Tarlac Anglers, frequent to carry out trolling and bottom fishing. They were caught by local fisherman through spear fishing. Our purchase was actually too much with 3 octopuses weighing more than 3 kilograms with the biggest one almost hitting the 2 kilograms mark on the scale.

The preparation starts with quickly dry cooking the octopus seasoned with salt on a large casserole or pan. Water is not necessary as the octopus will render some liquid as it is heated through. Cook only for about 5 minutes on medium heat. Don’t cook for more than 7 minutes as the meat will then starts to toughen and becomes rubbery, which will then require long slow cooking, maybe a couple of hours. 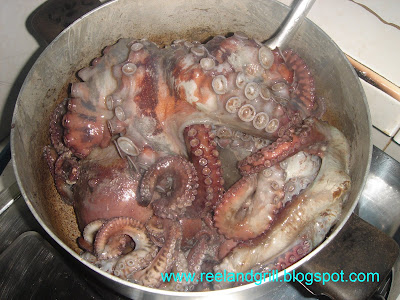 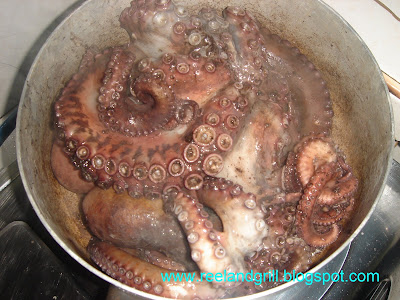 Wash the partially cooked octopus, gut and remove the ink sac and other entrails. Out of the 3 octopuses, I only used the 2 small ones, about less than a kilogram or 2 lbs after cleaning. The big one was kept in the freezer and reserved for some other dishes, probably “spicy adobo”. 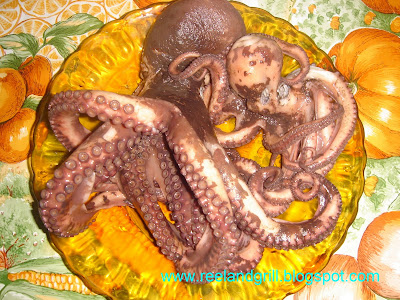 Though very similar to “kinilaw na dilis” and “kinilaw na tanigue”, I made the dish very simple with only the following other ingredients: 1 cup natural vinegar, 2 medium onions, peeled and finely chopped, 1 thumb-sized ginger, peeled and finely diced, 2 small birds eye chili, minced, ½ tsp ground pepper and 1 tsp salt or to taste. You can substitute “calamansi” extract to vinegar and add MSG if you like. 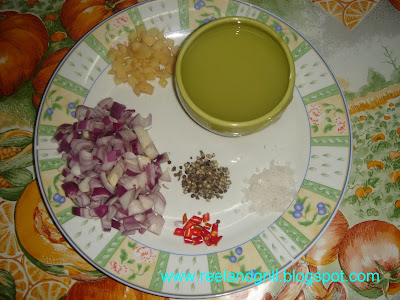 In a large non-reacting deep bowl, non-metal if possible, mix the vinegar, ginger, onions and chili. Dump the diced octopus meat and mix all the ingredients. 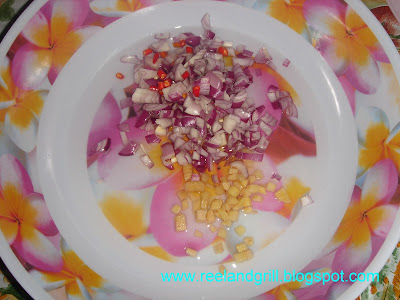 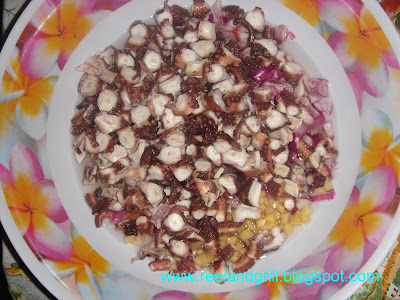 Add in ground pepper and season with salt. Stir it once more and let stand for several minutes for the taste to fully develop. Adjust the seasonings accordingly. 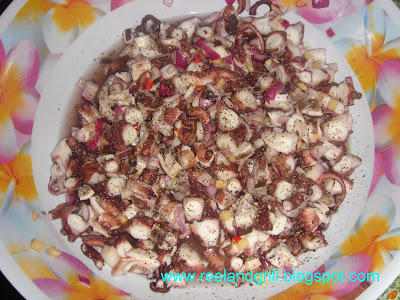 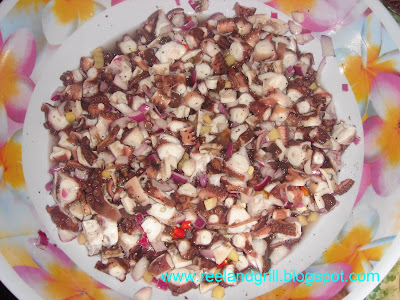 Transfer in serving plates and serve with steamed rice. Better yet, enjoy it as an appetizer or “pulutan” with your friends over a bottle of your favorite drinks. Mouth-watering huh! 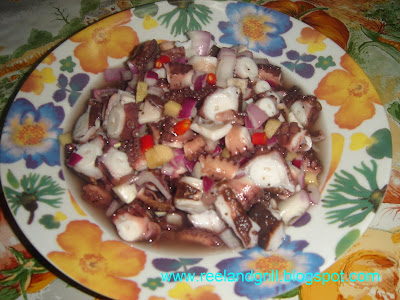 The good thing with such vinegar-based concoction, is that the palates will tend rejuvenate after every bite. With the added kick of ginger and chilies, this octopus dish will keep you alert and fully satisfied. Enjoy! c“,) 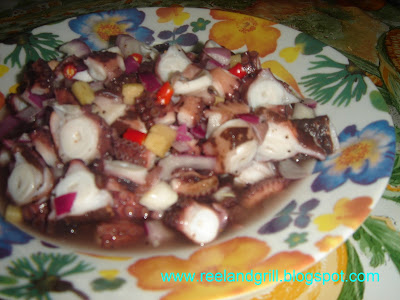