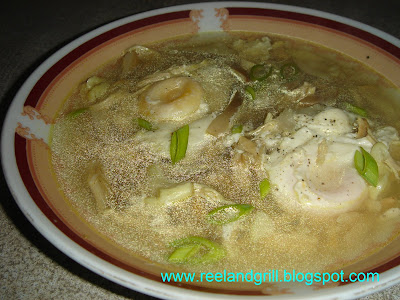 I woke up with a heavy head. I had a long and exhausting night before and my physical conditions aren’t quite tuned-in this morning. In such moment when I am not feeling good, I can only think of one breakfast dish to eat in order to perk-up my feelings and at the same time rejuvenate my downed strength. I am referring to the Filipino egg drop soup called “suam” or “suam na itlog” which, in its simplest form, is basically a quick-fix soup made of egg or eggs, beaten or whole, flavored with crushed garlic and seasoned with salt and freshly ground pepper.

This is the same soup that is usually serve to the sick and the elderly who are either too weak to eat solid meal or has lost appetite for food. It is said to have some sort of healing properties and the ability to provide energy to the frail body. With such renewing effects, the same soup was a favorite breakfast dish of people who have drank one too many the previous night and have woken up with severe headache and dizzy feeling due to hang-over. No, this is not from experience. :-)

Generally, egg drop soup is a Chinese soup of wispy beaten eggs in boiled chicken broth. Condiments such as black pepper or white pepper and finely chopped scallions or spring onions, grated corn and tofu are typical additions. The soup is finished by adding a thin stream of beaten eggs to the boiling broth in the final moments of cooking, creating thin, silken strands or flakes of cooked egg that float in the soup. Due to its easy preparation and great taste, egg drop soup popularity has grown and many varieties using different recipes are now common in different European and Asian countries, like the Philippines. 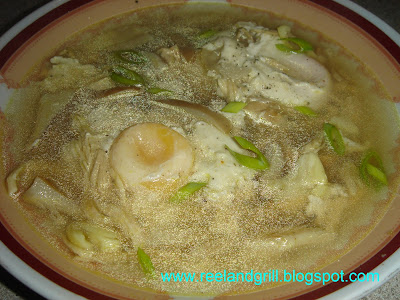 The American-Chinese version of egg drop soup is one that is added with a little quantity of cornstarch to thicken the chicken stock and add a rich texture to the soup. This is in contrast to the Chinese cuisine where it is preferred with a thinner consistency. A popular variant in Italy is made of egg and of course, parmesan cheese, while in Japan its egg drop soup has tofu as a common key ingredient.

To prepare my version of “suam na itlog” I go beyond the basic of just garlic-egg-salt-pepper. While there were times when I also like that simple one, a more elaborate preparation using other ingredients such as flaked chicken meat, corn, mushroom and other veggies is my regular fare.

For this preparation the ingredients are: 2 fresh farm eggs, several pieces of oyster mushrooms, to be roughly chopped, ¼ cup cooked and flaked chicken breast, 3 gloves of garlic, peeled and crushed, ¼ tsp ground pepper and ½ tsp salt or to taste. Additionally, about 2 cups of chicken stock is needed. 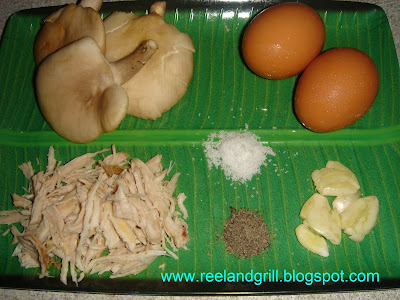 In a medium sauce pan or casserole, heat the chicken stock until briskly boiling. Add the garlic followed by the chicken meat. After a minute, add in mushroom and simmer on medium heat until it is cooked through. 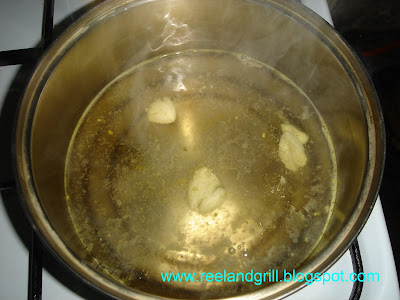 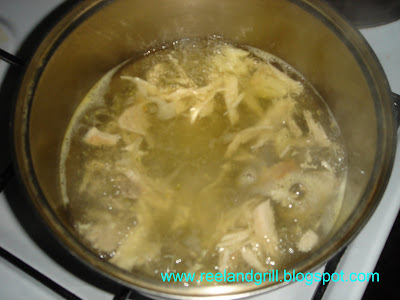 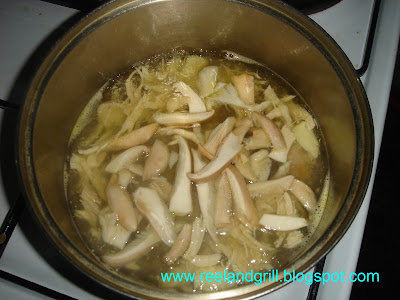 Add in ground pepper and season with salt. Taste the broth and adjust the seasonings accordingly. Finally drop the whole eggs and continue cooking until it is partially cooked with the yolk still runny.

If you prefer the eggs to be lightly beaten before adding, you can do so. It’s perfectly okay. I just love runny egg yolks in my soup. 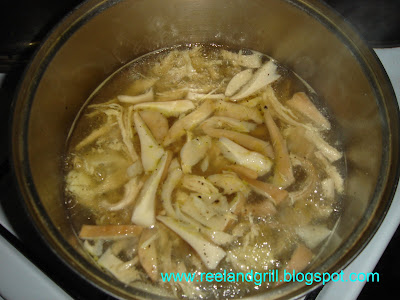 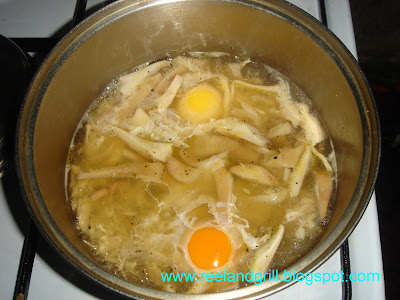 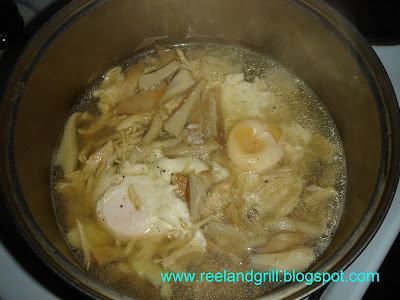 Take the pan out from the flame, transfer the soup in a bowl, sprinkle with chopped scallion or spring onion or leek and serve piping hot. :-) 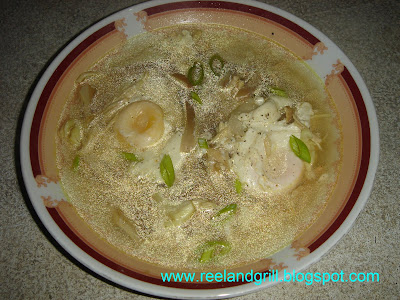 The soup goes well with a freshly baked and still hot “pandesal” (a type of Filipino bread roll) or even toasted sliced bread. It’s yummy and invigorating. Enjoy! c“,) 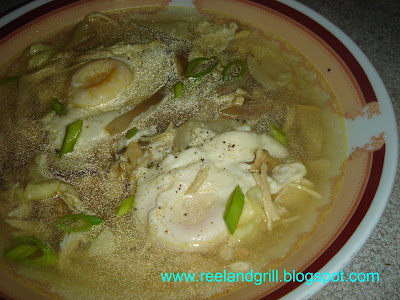