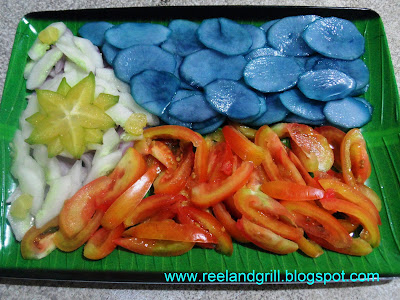 With the above image, I guess I really don’t need to explain at length why I have added the rather peculiar extra wordings in the title of what should have been a plain food post. This very humble Filipino dish especially made to resemble or at least reflect the colors and as attempted here, figure, of the National Flag of the Philippines (if it will really resembles at all :-)) and the color yellow famously associated with the martyrdom of Ninoy Aquino is actually my entry to the nationalistic August-September Culinary Challenge of the rapidly expanding Kulinarya Cooking Club (KCC). [Oh, I love that!]

The hosts of this power pack months’ challenge compose of Oggi of I Can Do That!, Day of Chef by Day, Ray of Wok with Ray and yours truly, Boyet of Reel and Grill. Collectively, we have chosen the theme – colors yellow, red white and blue taken all together in honor and consideration of the Philippines’ celebration of the significant Ninoy Aquino Day on 21st August 2011 and National Heroes Day last 29th August 2011. Although a little late, it has good intensions so therefore it is permissible. :)

While complying with the colors yellow, red and white is quite easy with the abundance of food ingredients which come naturally in such hues, the requirement for a shade of blue provided the difficulties, restrictions and depth to the challenge. While it intends to squeeze the possibilities, it added excitement and necessitated the dispatch of deeper imagination, creativity and ingenuity on the part of the participating KCC members.

For my humble entry, I decided to dwell on the aspect of patriotism by trying [hard :)] to prepare an authentic Filipino dish, with some tweaking of course, which will somehow project the true image of the Philippine flag which incidentally also have the color yellow reminiscent of Ninoy Aquino. Your impression of the photos located far above and immediately below this will be the testament if I was able to realize my plan. :-) 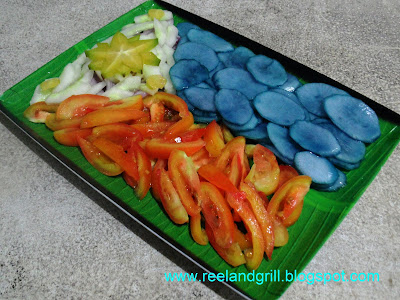 As mentioned in my first post of the dish, “ensaladang labanos” is an easy salad dish made from thinly sliced white radish, chopped tomatoes, cucumber and onions and seasoned with sea salt or fish sauce or “patis” or like in the case of my first version, with “alamang” or salted shrimp krill. Usually eaten as a side dish in a main meal, the crunchy salad dish goes very well with fried or grilled fish, meat and other seafood.

While radish which is referred to as “labanos” in the Philippine language comes in different varieties, most Filipinos are familiar with the long and very whitish variety usually added in “sinigang” (pork stew in tamarind) for its unique balancing taste. For me, the natural taste of “labanos” is not really very pleasing but since it is loaded with vitamins and minerals such as ascorbic acid, potassium, vitamin B6, riboflavin and calcium to name a few, I developed my appetite to the watery vegetable.

Like before, I am using the variety known as “mooli” here in Sri Lanka. It is the large white radish variety (although what I purchased appear to be just baby ones) popularly called “daikon” or Japanese radish or Chinese radish or sometimes Oriental radish. This is a better tasting radish with lesser astringency, at least according to my taste buds. :) 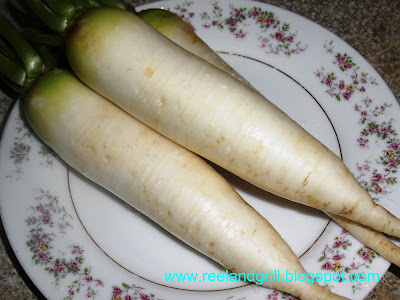 The ingredients needed are 3 pieces small radish, about 5 large plum tomatoes, 2 medium onions, 1 small carambola or “balimbing” (freshly picked from a tree in our backyard), 2 tbsp fish sauce or “patis”, 2 tsp salt, pinch of ground pepper and a small cucumber. Obviously, we already have the white, the red and the yellow colors from the major ingredients shown below. 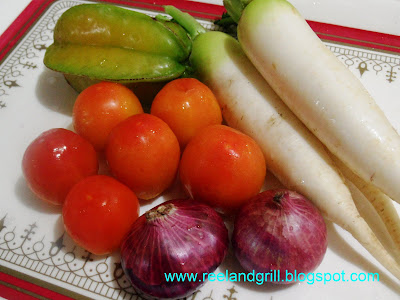 Since the object is to prepare the “ensaladang labanos” in the fashion of the flag designed by Emilio Aguinaldo and manually sewn by Marcela Marino de Agoncillo with the help of her daughter Lorenza and Delfina Herbosa de Natividad, we shall need a source of the shade of blue, the top horizontal color of the flag.

As history will tell us that the shade of blue in the flag have been the point of disagreements in the past, it is also our biggest obstacle in making the dish. So we are constrained to ask some help from the magical red cabbage to provide us with natural food coloring enough to be classified as blue. In addition to the ingredients above therefore, we shall need a small red cabbage. 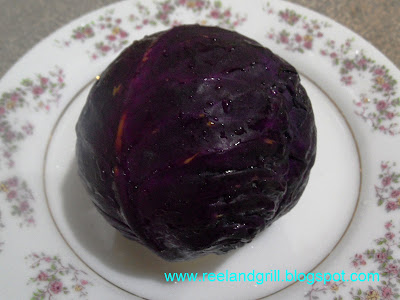 Likewise, to complement the shredded cabbage are about a cup of water and a pinch of baking soda. 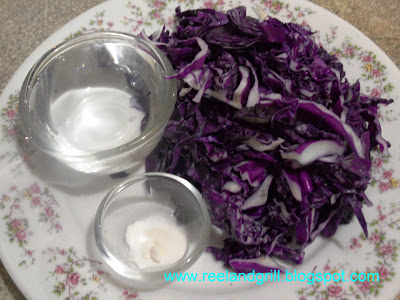 To prepare the dish, the first step is to make the blue food coloring. In a small sauce pan add the shredded red cabbage and water. Simmer for about 10 minutes, until the cabbage turns mushy and the boiling water becomes purplish in color. 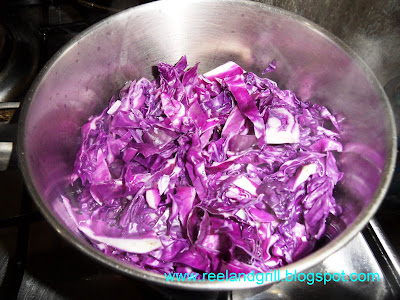 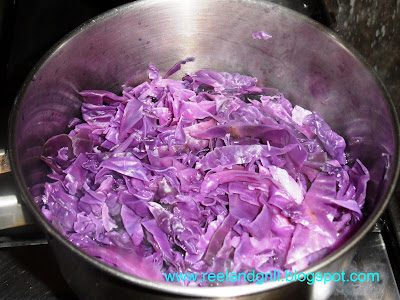 Strain the cabbage using colander and collect the solution. Add a small amount of baking soda and magically turn the purple solution into a shade of blue. Use baking soda sparingly so as not to affect the taste of the dish. 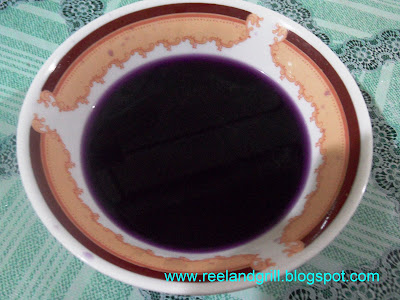 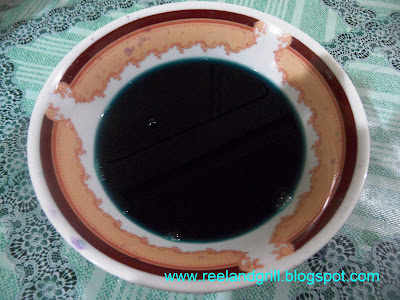 The next step is to peel and then thinly slice the “daikon” radish diagonally. Sprinkle about a teaspoon of salt to the sliced radish, mix thoroughly then squeeze in between your palms in batches to remove some of its bitter juice. Quickly rinse them under running water then drain again thoroughly, with light squeezing as well. 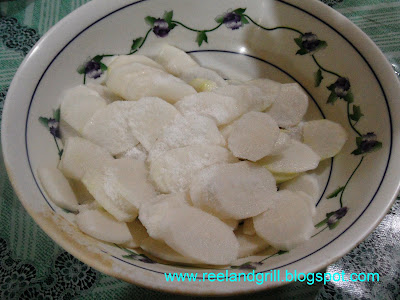 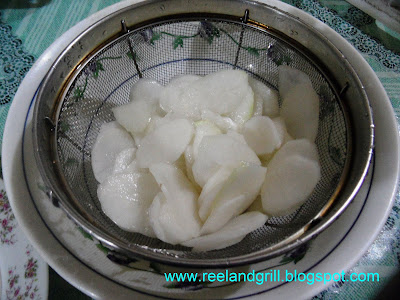 Soak it in the blue solution and keep for about an hour to acquire the blue color. Set aside. 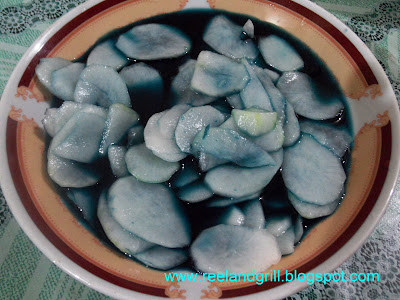 While soaking the radish, prepare the other ingredients. Chop the tomatoes into thin wedges then halve and slice the onions. Using a rectangular serving plate, arrange the tomatoes and onions as shown below. 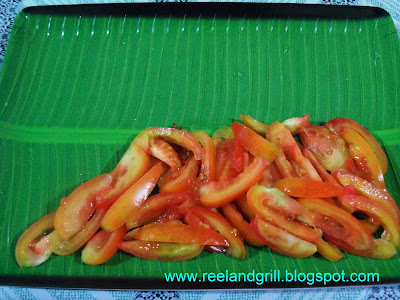 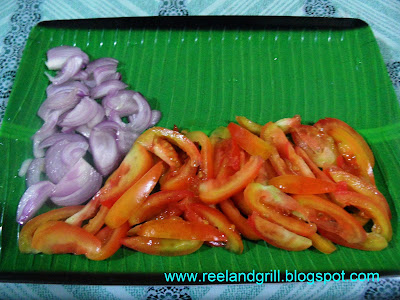 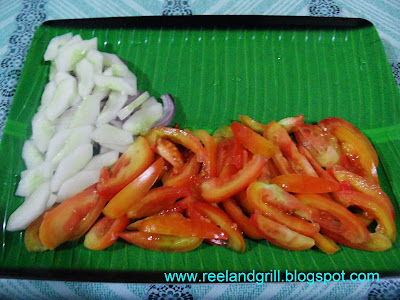 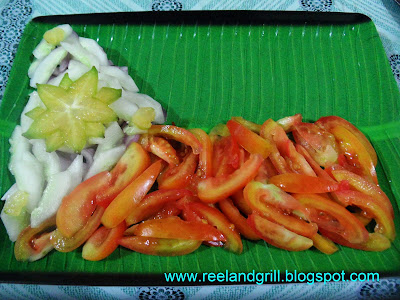 Finally, take the radish out from the blue solution and arrange on the vacant space of the plate as shown. I guess this looks familiar to you now. :-) 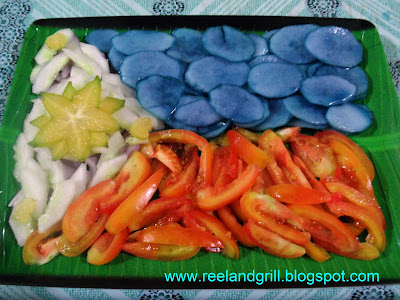 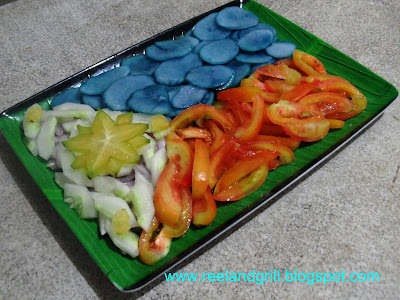 In a small bowl, mix about 2 tbsp fish sauce, a pinch of ground pepper, the remaining salt and about 3 tbsp of the blue solution until you attain this seasoning: 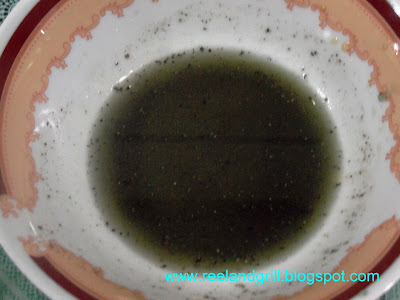 Slowly drizzle on top of the vegetables. We are now ready to have a taste of our history. 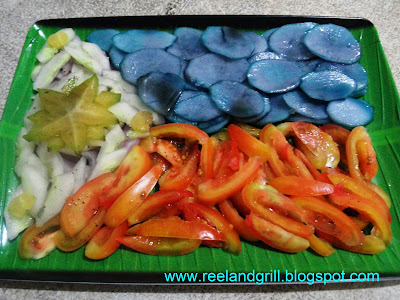 Since our patriotic “labanos” is just a side dish, we need this bird that has been continuously rotating in the oven while we are busy drawing the flag. :) 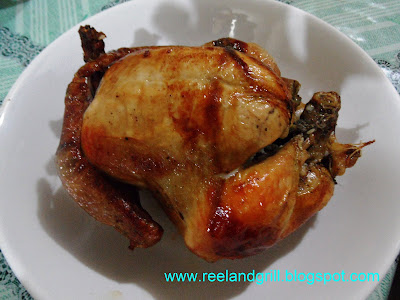 There it is! My “ensaladang labanos” – the patriotic version made especially for Kulinarya Cooking Club. Oh, I can’t be prouder. Enjoy! c“,) 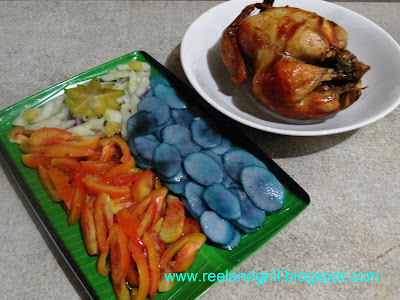 Posted by Cuisinegineer at 2:19 AM