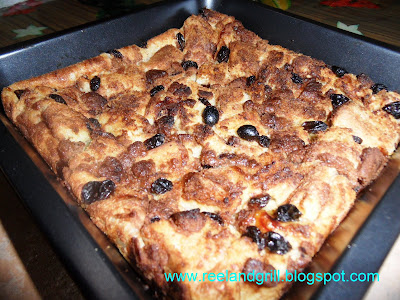 We are experiencing sweet tooth for the last several days. To satisfy the craving, I initially planned of making a “maja blanca” or Filipino white pudding but for some reasons, I can’t set the rhythm of starting the preparation. The other day, I purchased full ingredients for a single mixing of “leche flan” or caramel custard but still, even with the thought of the appetizing dish, I can’t shift myself into a cooking mode. :) I felt too lazy to even make the caramel syrup, so as expected I remained unable to prepare the luscious crème caramel until now. But after some contemplation and serious reevaluation though, I finally realized that the problem is that I am afflicted by a virus called “DITS”.

Yes, you heard it right, I have been suffering a minor case of “Do-It-Tomorrow-Syndrome” ……… wait …… based on the way I’m posting in Reel and Grill over the past few months, make that a chronic case of “DITS”. :-) Since I diagnosed it by myself ……… of course, I have to treat it by myself …… with force if necessary. :-)

This bread and butter pudding is probably my antiserum …… my salvation of sort. Firstly because it is so good that it could well please our sweet dish wanting. Secondly, it is so easy to do that I’ll need minimal effort to undertake it. And, lastly, we have a fridge full of several days-old sliced bread and lots of fresh milk. All together, it makes the perfect condition forceful enough to finally eradicate the unwanted syndrome. :-)

As a backgrounder, bread and butter pudding is a bread-based dessert made by arranging layers of sliced or cubed bread (traditionally left-over or stale ones), added with butter and scattered with raisins and dried fruits in an oven dish into which mixture of egg, milk (or cream), sugar, nutmeg, cinnamon powder, vanilla and other spices, is poured. It is then baked in an oven until the mixture has set and crust is slightly browned on top. Some people may serve it with custard or cream, but often the pudding under the crust is moist enough to be eaten without sauce. 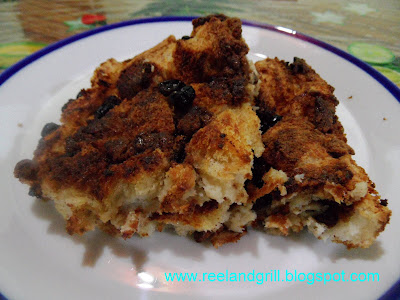 Like most puddings, bread and butter pudding is a childhood reminiscent comfort food. Most often it is associated with the growing up times and school dinners. Since it is a dessert, many types of fruit jams, marmalade or other sweet preserves is good to be spread on top just before eating. Other modern variations include scattering fresh or dried grapes between the layers of bread, melting apples into the egg-milk mixture and using other types of breads such as croissants, brioche and probably even Filipino bread rolls such as “pandesal”, “monay” and the likes.

A close relative and very similar dish is bread pudding. It is a popular dessert loved in many countries like England, France, Belgium, Puerto Rico, Mexico, Argentina and United States. Commonly, it is served with a sweet sauce of some sort, such as whiskey sauce, rum sauce, or caramel sauce, or simply just sprinkled with sugar and eaten cold in squares or slices. It could also be eaten with regional varieties of dressings such as custard sauce in Malaysia, vanilla cream dressing in Hong Kong and maple syrup in Canada. To prepare our version of bread and butter pudding, we need the following few ingredients: ¾ cup fresh milk, 6 tbsp white sugar, 2 large eggs, ½ tsp vanilla extract, ½ tsp cinnamon powder, 6 slices of bread, diced, 1½ tbsp butter, 2 tbsp seedless raisins and 4 chocolate chip cookies. 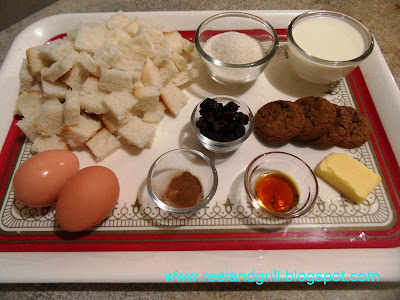 First, preheat oven to about 200 ˚C or 400 ˚F or gas mark no. 6. Then, in a medium bowl, combine fresh milk and sugar. Stir in eggs and beat until evenly mix and sugar is fully dissolved. 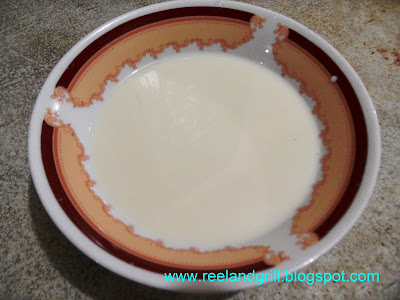 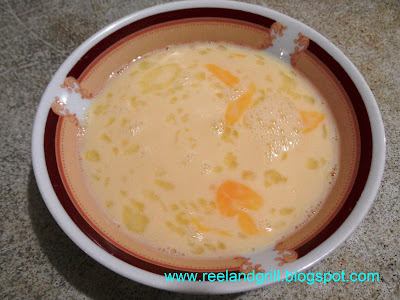 Add in vanilla extract and cinnamon powder and continue stirring until properly combined. 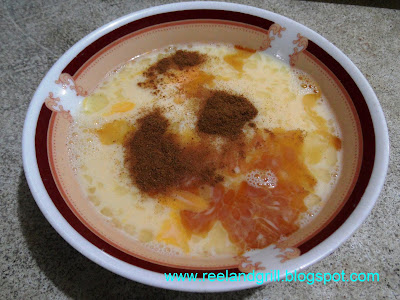 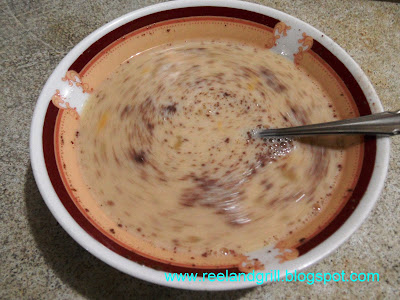 In a baking dish or small pan cake, arrange the diced bread in layers. Melt the butter (in a microwave) and pour evenly on top. Distribute raisins on top and in between the layers of bread. Crumble the cookies and sprinkle on top as well. 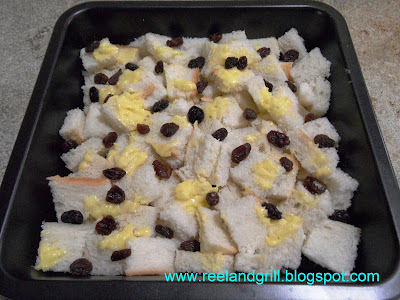 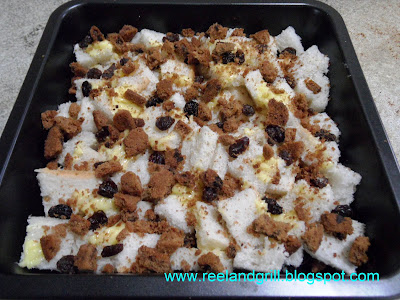 Slowly pour the milk-egg mixture evenly on the pan. Let the bread layers fully suck up the mixture by pressing it gently with fork then releasing creating a suction effect. Continue until all the bread pieces are nicely moisten by the mixture. 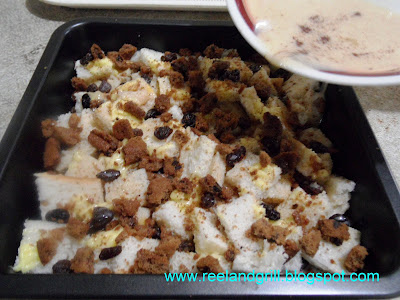 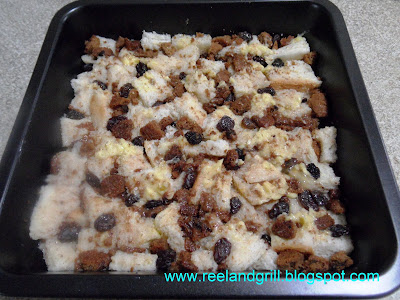 Place the pan in the oven and bake for about 30 minutes on until the crust is slightly browned, mixture has set and the top springs back when press lightly. 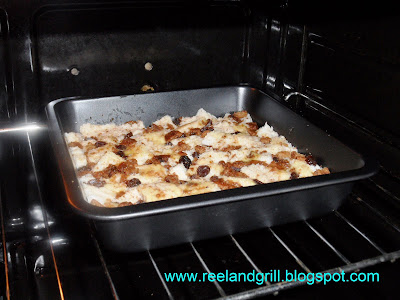 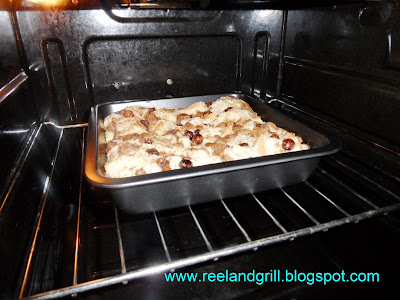 Take it out of the oven and let it cool a bit. Meanwhile, savor the air filled with pudding fragrant. :) 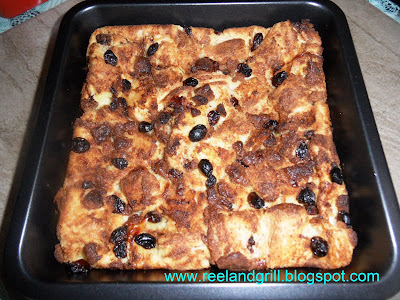 Slice uniformly or tear as you wish and then serve warm as dessert after a meal or even snack in between meals. With a pat of jam or marmalade, spoon of dressing, drizzle of syrup or none at all, it will be easily be consumed for sure. Enjoy! c“,) 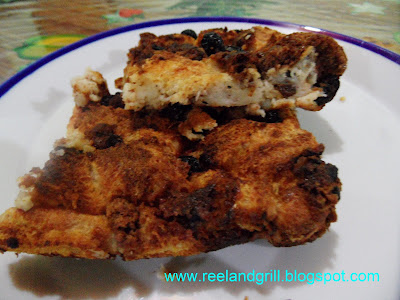 Posted by Cuisinegineer at 5:03 PM