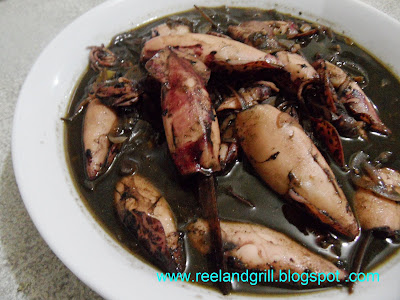 As I have already stated here, Filipino “adobo” with its countless variants and derivatives encompassing major meat commodities such as beef, pork and goat or mutton; poultry such as chicken, duck, geese and turkey; vegetables such as “kangkong” or water spinach or river cabbage and short and long beans; animal entrails such as liver, gizzard, heart and intestines; exotic and other game meat such as frog, rabbit, venison, wild doves and wild boar; and seafood such as fish, crabs, clams and octopus, provides us with numerous options to truly enjoy the regarded Filipino national dish with our family and friends.

In active support of the “adobo” phenomenon, which we can proudly consider as a vibrant and continuously expanding cuisine on its own, allow me to constantly feature here a different version of “adobo”, probably once in a month. While this exercise will be a good learning experience for me and you (if I may say so), it will also serve as our simple way of effectively showcasing the Filipino ingenuity in the field of food preparation ……… utilizing distinct food groups ……… through a potential internationally-acceptable cooking method or technique.

The above is my genuine thought and not a made-up excuse for posting another “adobo” dish. :-) And if you are somewhat overwhelmed with the many types of meat “adobo” posted here (although I personally believe that Filipinos are capable of consuming a version of the dish every week without getting really tired of it), let me share an “adobo” prepared using seafood; the marine predatory mollusk called squid in particular. The savory dish is locally known as “adobong pusit” or squid “adobo” in the Philippines. It is basically squid sautéed in ginger and tomato and then lightly stewed in soy sauce and vinegar. 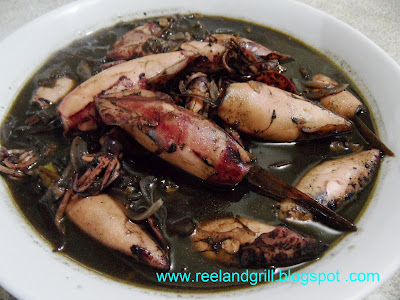 Quite hard to imagine, squid are marine cephalopods which comprise around 300 species. I may have encountered or seen about 10 kinds so there are still some 290 species I have not seen either while fishing or chanced upon while marketing. Like all other cephalopods, squid have a distinct head, bilateral symmetry, a mantle, and arms. Similar with its close cousin cuttlefish, squid have eight arms arranged in pairs and two longer tentacles use for gathering food. The main body mass is enclosed in the mantle (our favorite part as a food item) which has a swimming fin along each side.

If you (like me) are wondering how squid can change color to blend with its surroundings and effectively become invincible, that’s because of the viscous skin covering called “chromatophores”. In addition such capability, its underside is almost always lighter in color than the topside to provide camouflage from both prey and predator. A magnificent design of nature intended for the sustainable existence of squid, so that we, humans, can continuously enjoy them in our dining table and even along the streets of Manila, China and other Southeast Asian nations as the tasty snack calamari. :-)

For this “adobong pusit”, we need about 1 kilogram or 2.2 lbs of really fresh squid. It should be properly cleaned, the beak (or tooth) removed and thoroughly drained. The decision whether to remove or keep the gladius, the backbone–like rigid internal shell that supports its body, is yours. It is not edible but usually left intact by most restaurants for commercial advantage as it prevents the squid from shrinking too much. We also don’t remove ours. 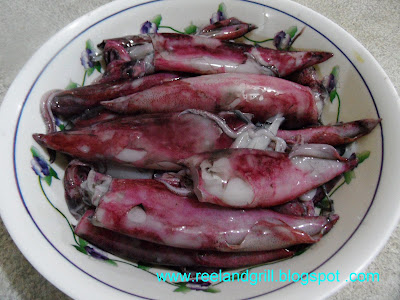 The other ingredients needed are as follows: 2 thumb-sized ginger, peeled and julienne, ½ head garlic, crushed and minced, 1 large onion, peeled and chopped, 2 plum tomatoes, chopped, ½ tsp freshly ground pepper, ½ tsp iodized salt or to taste, about ¼ cup natural vinegar (please adjust accordingly, depending on the acidity) and about 1/3 cup soy sauce. Additionally, about 2 tbsp of vegetable oil for sautéing, 1 tbsp white sugar to counter the sharpness of the taste and about ½ tsp whole peppercorn (optional) are required. 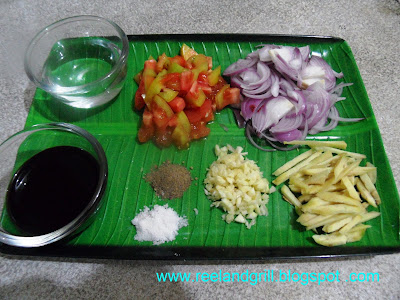 In a large heavy pan or wok, heat the oil and fry garlic until it is slightly browned. Add in ginger followed by onions and cook until the onion is translucent. Add the tomatoes and continue sautéing until mushy and somewhat oily. 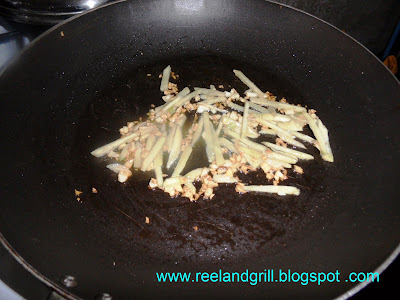 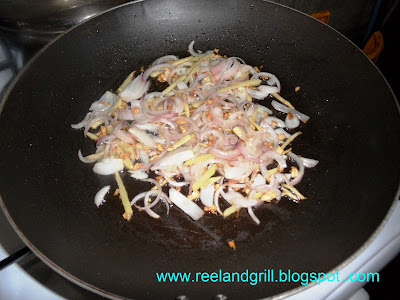 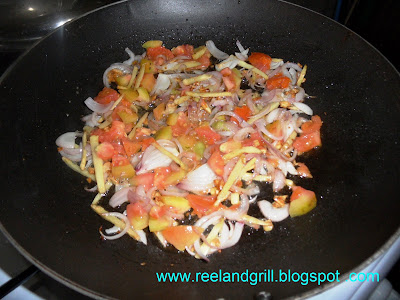 Add in soy sauce and continue simmering until it is briskly boiling. Add in the drained squid and cover. Allow the squid to render its own liquid as it is heated through. Add the ground pepper, whole peppercorn (if using) and season it with salt. Stir to properly mix all the ingredients. 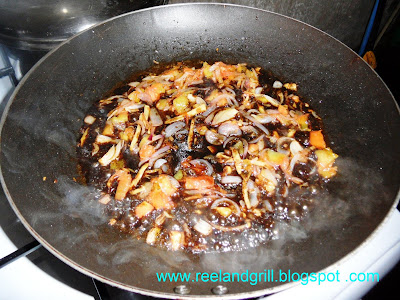 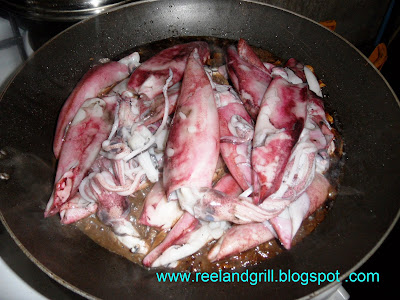 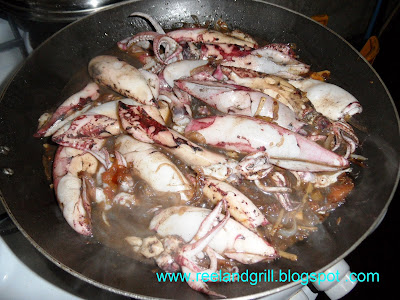 Continue cooking on high heat until the liquid is almost dry. At this point, add in vinegar and continue cooking on medium heat with the lid off. When the liquid has reduced add the sugar to balance the acidity and simmer further on moderate heat. Taste and make the final adjustment of the seasonings according to your preference. 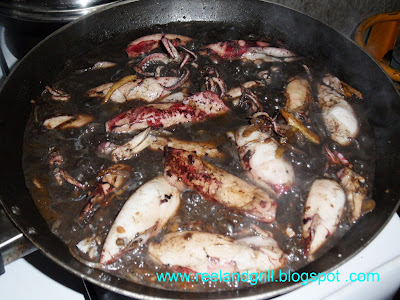 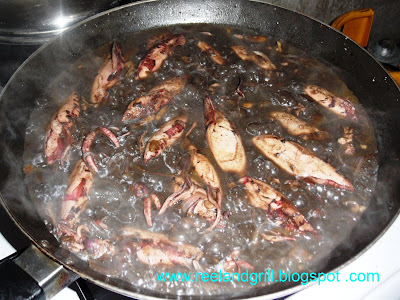 Your preference whether to make the dish a little saucy or dry and somewhat oily is entirely up to you. We like ours with some sauce that remains for slathering on huge mounds of piping hot steamed rice or as bites or appetizer or “pulutan” over a bottle of our favourite drinks. :-) 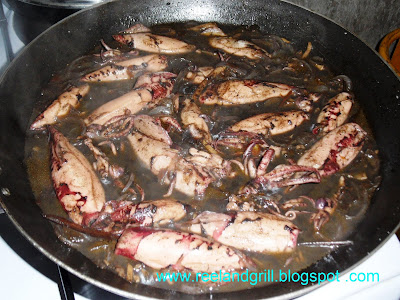 Transfer in serving platters and serve. In our group, that means right away for we are already starving. No kidding. The natural diffusion of fragrant smell during the cooking process aggravated the already worse stomach conditions. :) 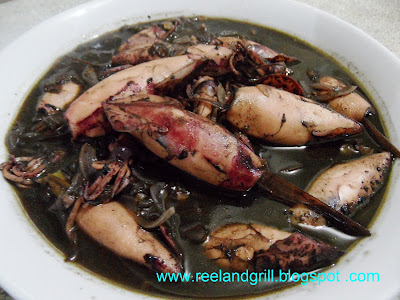 There it is, our version of “adobong pusit” ………… another addition to our long list of “adobo” dishes. By the way, have I mentioned that squid is a good food source of zinc, manganese and high in copper, celenium, vitamin B12 and riboflavin? I’ll inform that next time. Try and enjoy it with the whole family! c“,) 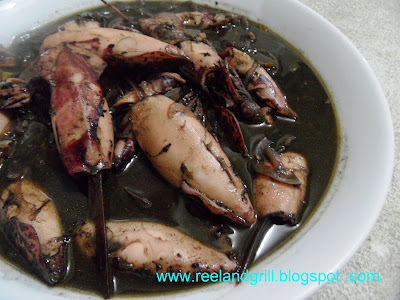 Posted by Cuisinegineer at 12:11 AM