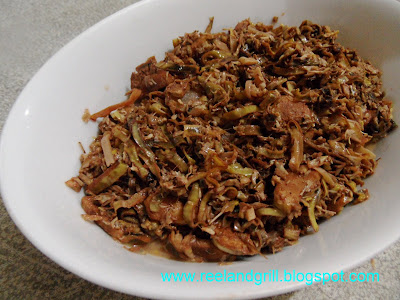 For the month of March, the challenge of Kulinarya Cooking Club (KCC) is centered on the mighty food group called vegetables. While most members including me, a perennial vegetable eater (converted by force :-)), were all deeply pleased and thrilled of the theme, probably my daughter’s and surely most kids’ immediate reaction (upon learning that “gulay” will be the basic ingredients) would be a very long “yaaaaks”. Probably, they would even continue by asking “Won’t you guys ever consider using jumbo hotdogs in your theme?” ……… and they will utter that with matching voice tone and facial expression suggestive of true seriousness. :-)

Those clueless kids! If only they knew the benefits. But then, from the inner faculties of my brain came tiny electrical signals which translate to “just like you when you were their age”. I kept silent for a moment. Not really thinking but then wondering. :) Well, probably that usual scenario (I believe most parents already experienced) could be taken as a compelling reason for the KCC members, and all parents at that, to work hard on the ideals of this challenge. That this is not only our way of somehow showcasing the unique Filipino vegetable dishes to the world through “blog sphere” and internet but effectively stirring interest to the healthy food for the children within the family, our circle of friends and hopefully, the whole community.

So that the proliferation of unusual (also funny) Filipino variations of popular international foods involving the (hold your breath) removal of vegetables in them such as in the case of all-meat “shawarma” (without cucumber, onion or tomato); likewise with the all-meat pizza (almost with neither tomato, bell peppers, onions, mushroom, olives, etc.); also with the plain burger with just the bun and a thin patty (with neither lettuce, tomato, pickles nor onion); and many more food versions which could quite aptly fall into the category of (though I really hate this cliché) “only in the Philippines”. Prompting me to worry that one day we might see a unique Filipino variant of “all-meat Ratatouille”. :-) 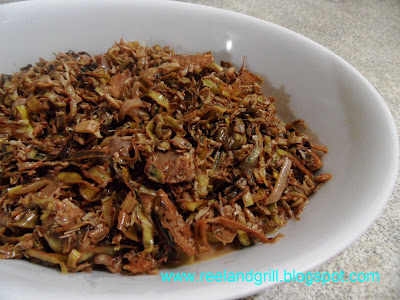 I have already featured here several vegetable dishes inherent to Philippines such as “laing” from the Bicol region, “ginisang gulay” or “pinakbet Tagalog” from the Manila Capital and Southern Tagalog regions, “abraw” or “inabraw” from the Ilocos region and the extremely popular and widely-accepted fried Filipino spring roll called “lumpia” or “pritong lumpia”.

I initially thought of preparing the spicy Bicol express for the Kulinarya challenge but I immediately changed my mind and passed on the thought that it could be too spicy or hot to be patronized by the choosy and discriminating taste of most children which I hope this challenge will somehow impact. Finally, I decided to make my version of the easy “Kapampanagan” (from Pampanga & Tarlac, Philippines) dish called “sisig na puso ng saging” which in other regions are referred to as “kilawing puso ng saging”. The dish is basically made from thinly sliced banana blossom sautéed in vinegar.

Banana bud or blossom is actually the flowers of the banana plant which appear in groups called hands and the purplish bracts that separate and cover each hand along the stem. When the bract rolls up it will expose a new hand of flowers. After the female flowers which develop into fruits were exposed (more or less 10 hands) the banana bud can be harvested as a vegetable. Why? Because the next hands to appear will compose of sterile and male flowers which will just shed out but not become fruits. So basically, in the life of a banana bud, the concept is to let the females continue with life and sentence the males to an early death in stews and other dishes. Life isn’t fair sometimes. :-) But males should not feel too bad, for they will not be alone in the struggle; they will be joined with the sterile flowers and the young bracts and stem. :) 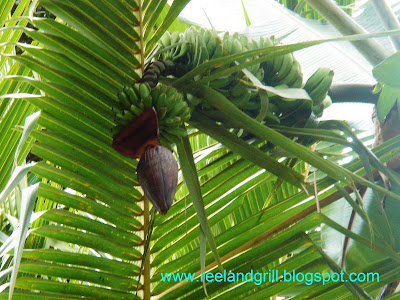 My father told me the best banana bud or “puso ng saging” are those harvested right after it appears atop the trunk; before it even shed female flowers. That would be more fun and fair ……… both males and females ending up in stew. But of course, with the current economic difficulties that is no longer practical. The idea that fruits must be allowed to develop and settle to just eating the males and the sterile ……… would be more sensible.

For the dish, we need about two medium-sized banana buds …… the freshest the better. I really don’t know the variety of these buds but certainly not “candaba” or “musa saba” which we usually use in “banana que” because that type is not available here in Sri Lanka. Probably, they are from “seeni kesel” variety which I cooked into “minatamis na saging” before. 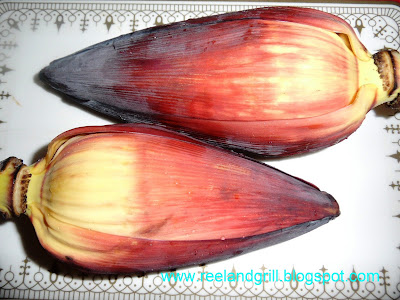 The few ingredients needed are as follows: 5 cloves garlic, crushed and minced, 1 medium onion, chopped, ½ cup white vinegar, 2 tbsp fish sauce or “patis”, 2 pcs chili peppers, seeded and julienne, 1 tsp salt and about ½ tsp ground pepper. In addition, we need about 3 tbsp vegetable oil for the sautéing and about six cups water with 2 tbsp rock salt for removing the acrid taste of the banana buds.

You could add shelled shrimp or boiled meat if you prefer. I want it to be a pure veggie dish so that there is no way for others to convert it into all-meat “sisig na puso ng saging”. :) 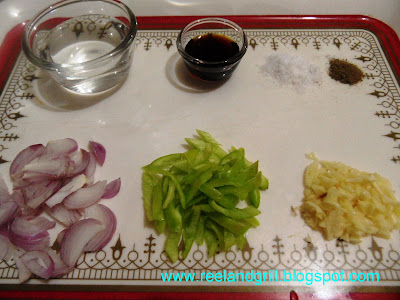 First, peel off and discard the outer layers of bracts (purplish covering) along with the maturing flowers it covers until the yellowish layers or soft inner core appear. Cut off the hard stem and the tip of the bud. 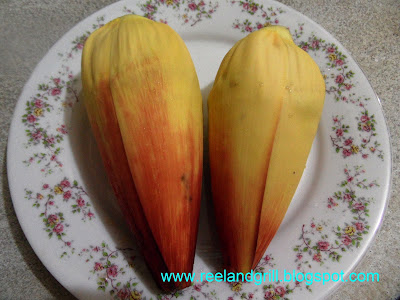 Cut the buds in halves, lengthwise. Then slice them thinly across its width. Dump them immediately into the brine to avoid it from getting dark. Gently squeeze the sliced buds in the brine in batches to remove the acrid or bitter juice. Rinse well and drain. 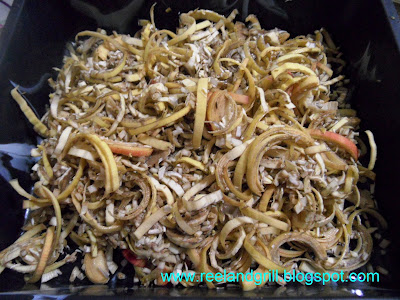 In a large pan, heat the oil and fry garlic followed by onion. When the onion is translucent, add in fish sauce and let it sizzles away until aromatic. Add in the chili peppers and continue sautéing. 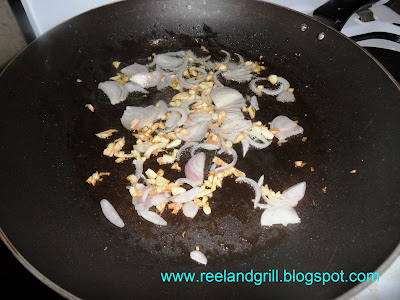 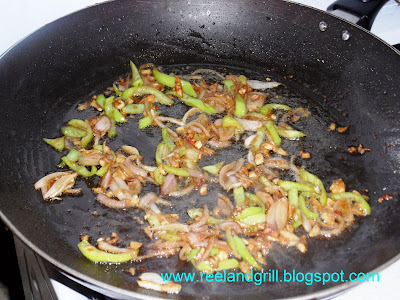 Add in sliced banana blossom and continue cooking. Season it with salt and ground pepper. Stir fry until the liquid rendered by the veggie is reduced. 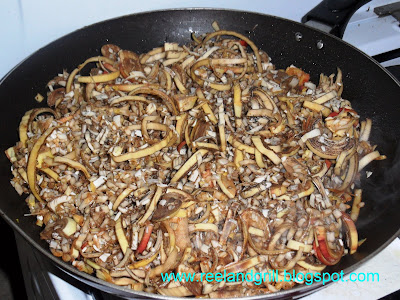 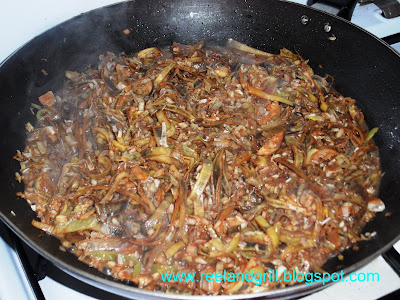 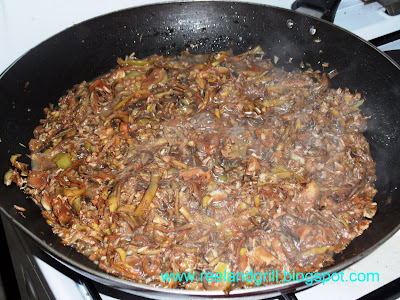 Add the vinegar and let it boil uncovered without stirring. When it is already boiling, stir and continue simmering until the liquid is reduced. Taste and adjust the seasonings. Simmer for a minute more and turn the heat off. 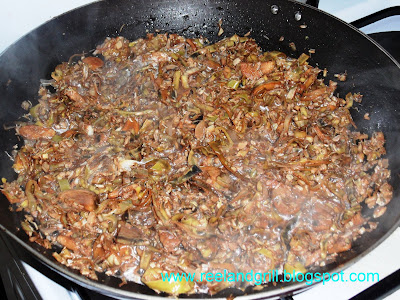 Transfer in serving bowl and serve alongside any fried dish of fish or meat and lots of steamed rice. Your “sisig or kilawing puso ng saging” is ready. 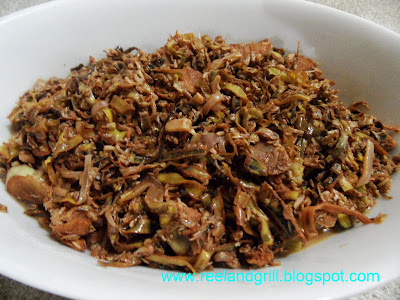 We ate this with a simple Filipino-style fried chicken (cut up chicken and seasoned with salt and pepper only) and our group were treated with a really fine meal. Simply yummy! :-) 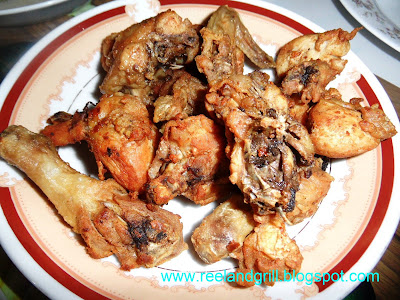 There it is! My entry to the KCC challenge for the month of March. An authentic Filipino vegetable dish which we should remember is made from the sterile and male flowers of banana blossom (a.k.a not capable of developing fruits) along with its young bracts and stem. Enjoy! c“,) 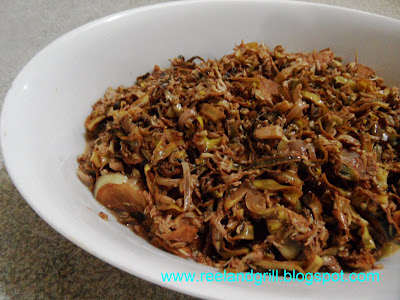 Posted by Cuisinegineer at 7:32 PM