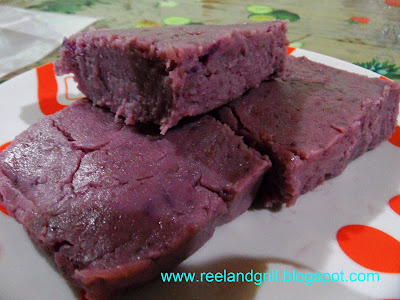 Violet was apparently the “in” color in the Philippines at the time I had my annual vacation last December 2010 to January 2011. Lots of mall rats (shoppers and roamers alike) were seen prominently sporting something in purple like shirts, blouses, bags, shoes, belts, sandals, ties, sleepers, purses and even cell phones and smart phones pouches and cases. I and my lovely better half even received a matching polo shirt-blouse presents from family members in a flashy lavender color which admittedly, I particularly like. It’s been my favorite shirt for the last 3 months. :-)

It is so funny for it was just not too long ago that wearing anything in such a striking color is somewhat untrendy and a no-no in popular culture get-ups. It only shows how fashion trends are evolving ……… that what could be considered as not cool today might eventually resurrect and rule the trend-in-style the next day.

Actually, this post has nothing to do with the above. Neither that I am a fashion guru of sort. That’s remote. I was just reminded of the flamboyant purple-attires of many teens I saw in the mall and other popular hang-out places in Manila when I was preparing this dish. Why? Because this involves an ingredient naturally synonymous with the color violet ……… the yam called “ube” in the Philippines also known as purple yam in English.

By the mere mention of the root crop “ube”, I know that, even without reading the blog title above (which I’m sure you did), you and most Filipinos will almost always think of only one food. The dessert and snack food called “ube halaya” or "halayang ube". I don’t know, but I believe it is but natural that when one sees “ube”, he will instantaneously imagine the luscious pudding made from grated boiled purple yam and cooked with milk (or coconut milk), butter and sugar. 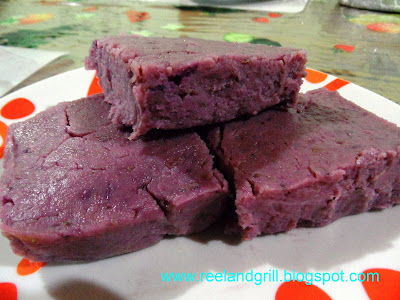 Purple yam, botanically known as water yam and winged yam, is a popular root cop and fruit from the vine plant scientifically known as “Dioscorea alata”. It is a familiar flavor in the Philippines used in many sweet preparations, pastries as well as in ice cream, “sorbetes”, cake, milk drinks and added to sherbet-like snack called “halo-halo”. What's so obvious with this tuber is its special pigments which give its pronounced deep lavender hue.

“Ube” is also called “ubi” in the Philippines. In Hawaii it is called “uhi” while in Tonga, Samoa and Tahiti it is known as “ufi”. It is also called “ratalu” or violet yam in India and “rajala” here in Sri Lanka. Although not extensively grown like the African yams, it is said to have the largest distribution world-wide of any grown yam, being cultivated in Asia, the Pacific islands, Africa and the West Indies.

In addition to the previously featured traditional Filipino sticky “kakanin” such as “cuchinta”, “maja blanca” and “espasol”, let us cook our version of “ube halaya” which I learned from my mom (who really loves the dish but totally hates the tedious mixing and thus constantly assigning the stirring job to me :(), we need about 1.5 kilograms (about 3.3 lbs) of the lilac-colored yam. Scrape the dirt clinging to the skin and thoroughly wash each crop over running water. 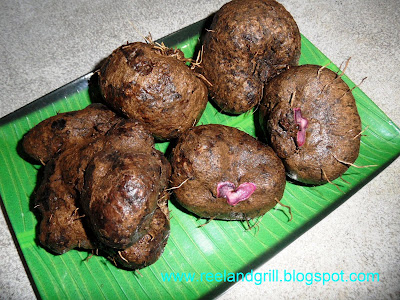 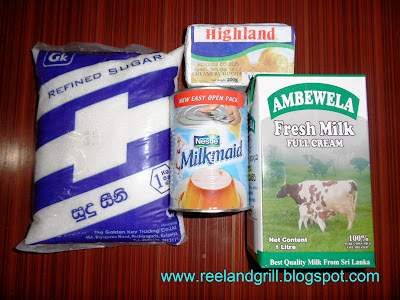 First, arrange the purple yam in a large casserole, pour enough water to cover and boil until the “ube” flesh is soft and tender. It would take at least an hour on medium heat to attain the right doneness of the yam on which skin can be easily peeled off. 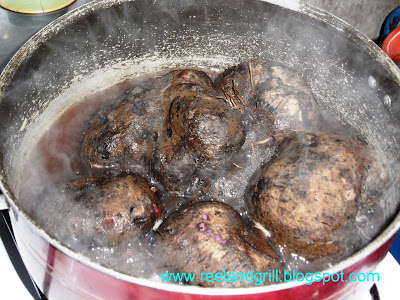 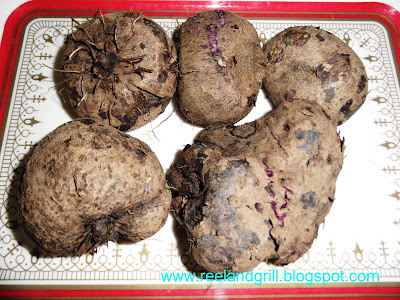 Carefully remove the skin and hair of the boiled yam by hands. As much as possible avoid peeling by knife as it would result to losing much of the deeply colored outer flesh (immediately after the skin) which contains most of the natural violet color. A pale-color pudding is the last thing you want for an authentic and natural “ube haleya”.

Finely grate the starchy flesh. Remove the hard parts which you will encounter during the grating process. The object is to only include soft and very finely grated flesh to attain a smooth pudding. 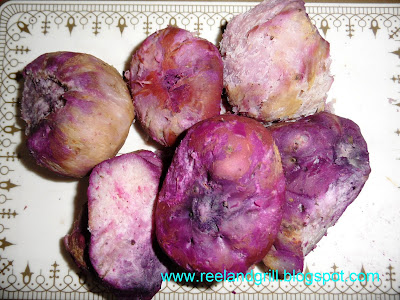 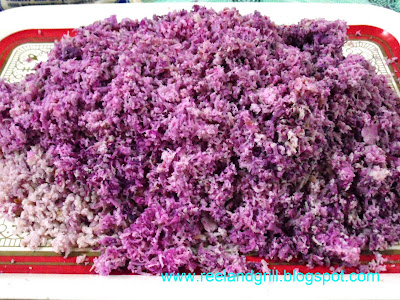 In a thick large frying pan or “kawali” over medium flame, heat the milk then add in butter or margarine. When butter has dissolve, add in sugar and continuously simmer while stirring to blend all ingredients and avoid milk from curdling. When the sugar is fully dissolved, add in the grated “ube”. 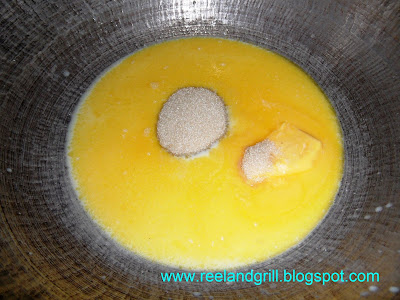 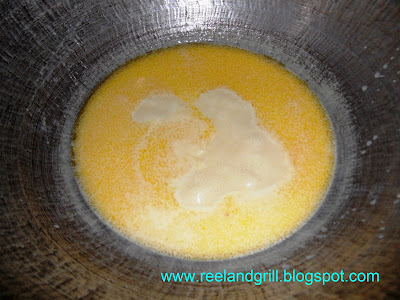 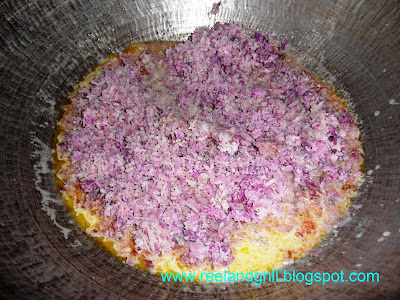 Continue with the slow process of cooking with regular stirring. Taste the slowly firming pudding to make sure you have the right combination of sweetness and creaminess. Adjust the ingredients if necessary. I added some more butter in mine.

Stir properly to avoid scorching the bottom. Be patient with the tiring stirring, it is an important part of the preparation. I never knew that before that’s why I would usually hide whenever my mom would start cooking “halaya” and only re-surface when it’s fragrant and done. :-) 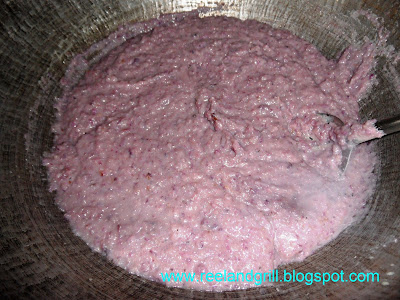 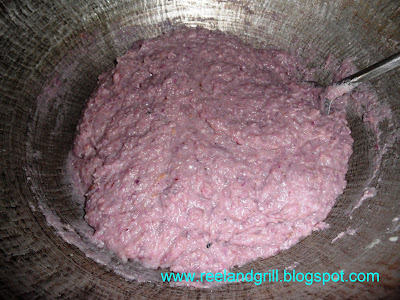 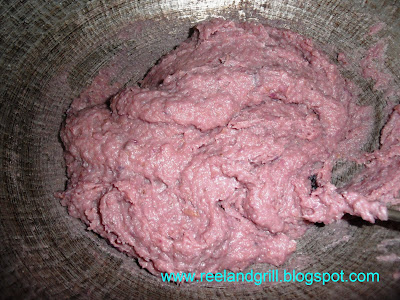 Continue cooking with stirring until the mixture is smooth, very sticky and you can stir no more. At this point, turn off the heat and rest your aching armpit. :) 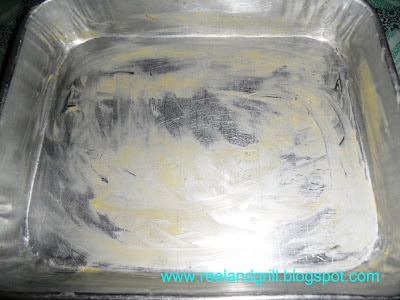 While resting though, apply a thin layer of butter to the inside surface of a rectangular or round cake pan or whatever mould or container you fancy. You are at liberty to use fun and exciting shapes and figures. 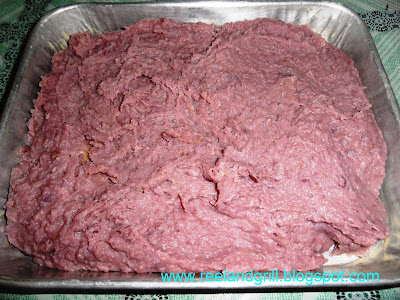 Scrape the cooked “halaya” into the moulds. Using spatula or the back of a serving spoon and some butter, smoothen the surface of the pudding. Apply a thin layer of butter on the surface as necessary to attain a really fine texture and fabulous appearance. Here it is the pudding we all love to eat …… “ube halaya”. So yummy!

Let it stand to cool down. It is actually better to first chill it inside the fridge for several hours or overnight for firmer and tastier pudding.

Cut to sizes you like and serve as dessert at the end of a sumptuous meal or as a snack in between meals. :) 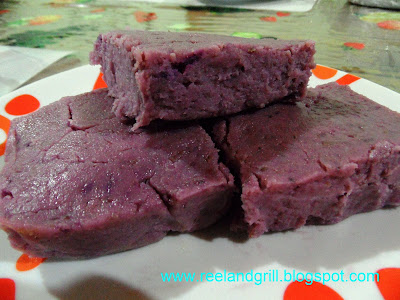 Usually, yam provides around 110 calories per 100 grams of product. It is high in vitamins C and B6, potassium, manganese and dietary fiber while being low in saturated fat and sodium.

Thus, we have even greater reasons to eat purple yam and serve it to our family for apart from exceptional taste, it also offers protection against osteoporosis and heart disease. Enjoy! c“,)
Posted by Cuisinegineer at 2:59 AM