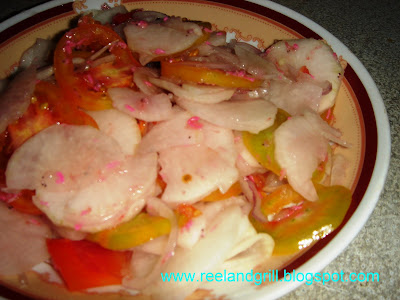 Simplicity brings out the best in anything. It is said to be the first step towards attaining great things. Quite startling still, simplicity sometimes provides us with the grandest form of excellence ……… of perfection ……… of sophistication. Indeed, there is beauty, creativity and harmony in simplicity. This is also true in food where simplification means avoiding or eliminating the excessive or unnecessary, either ingredient or process, so that the food’s natural goodness, taste, flavor and nutrients are fully brought out, highlighted and well preserved within the dish.

Simply saying, there are foods that are better made uncomplicated ……… truly simple. Not simpler of course. Just at the right level ……… where everything is wholly complementing with one another ……… where the main ingredient is at its best state and everything else is in harmony ……… jointly providing something more than the sum total of all of its parts. :-)

For me, the Filipino side dish called “ensaladang labanos” is among those foods. This could be debatable of course, but for me, it is. The easy salad dish made from thinly sliced white radish, chopped tomatoes and sliced onions and seasoned only with sea salt or sometimes with fish sauce or “patis” is surprisingly good despite its unbelievable simplicity. An easy and tasty dish loaded with character, texture, depth and color you won’t necessarily expect to come out from just mixing a few ordinary vegetable ingredients together. That’s right, there is no cooking process involved at all and yet such a nice delicious dish will emerge. 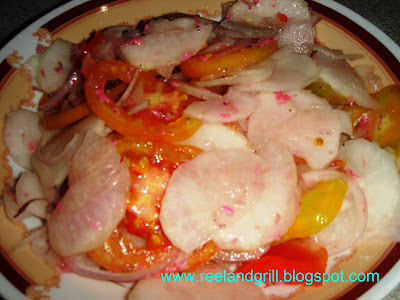 The radish, called “labanos” in the Philippine language is an edible root vegetable that comes in a variety of shapes, colors and sizes; such as white, red, pink, gray-black or yellow radishes, with round or elongated roots that can grow longer than a carrot or turnip. The several types of the surprisingly healthful plant include red globe radish, black radish, daikon radish, white icicle radish and even California mammoth white radish. Believed to have been domesticated in Europe during the pre-Roman times, they are now widely grown and consumed throughout the world.

Filipinos are more familiar and mostly are using the white elongated variety in their cookery like in “bopis”, “sinigang” and other meat and vegetable stews and yes in preparing the appetizing “ensaladang labanos”. In making my version of this salad however, I will be using daikon, the large white radish variety commonly found in East Asia called Japanese radish or Chinese radish or sometimes Oriental radish and known as “mooli” in India and here in the beautiful island of Sri Lanka. Along with some plum tomatoes and onion, one medium daikon radish completes our main ingredients for the dish. 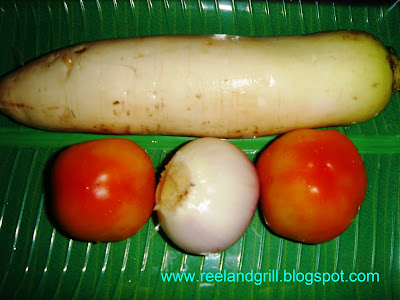 Admittedly, I don’t particularly like the taste of radish on its own when I was younger. I only learned to enjoy its unique flavor during my food exploratory time and just to take advantage of its many nutrients such the rich ascorbic acid, folic acid, and potassium as well as its high contents of vitamin B6, riboflavin, magnesium, copper and calcium. While its crisp and juicy flesh is naturally tart or somewhat bitter, that pungent along with the peppery taste is partly eliminated when cook in stews or balanced out by salting/brining or squeezed out by pressing (after slicing) if to be eaten raw like in the case of this salad.

So, the first step in the preparation is to peel and then thinly slice 1 medium daikon radish crosswise. If you are using the slender Philippine variety, you might need at least 2 or 3 pieces. Sprinkle the sliced radish with some sea salt and then squeeze in between your palms in batches to remove some of its bitter juice. At this point you can already use the squeezed flesh or if you like, you can quickly rinse them under running water then drain thoroughly.

Additionally, chop about 2 medium plum tomatoes into thin strips then halve and slice 1 medium onion. Arrange all the sliced ingredients in a plate. 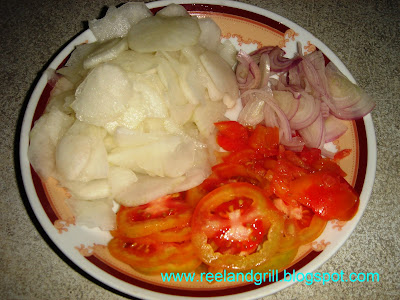 Usually this salad is only seasoned with salt. But for this version me and my wedding grandson (“inaanak”} Dong of the popular post “Pork Adobo a la Dong” intended to use the distinct Filipino condiment called “bagoong alamang” or fresh shrimp paste made from fermented minute shrimp or krill. You can of course, just use sea salt or fish sauce (if you like) if you are not into eating fresh shrimp paste. About 2 tbsp of good quality (a.k.a. not too salty and fragrant-smelling) “bagoong alamang” is all we need. 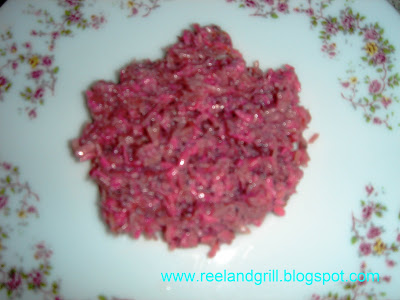 In a wide mixing bowl, simply dump all the vegetable ingredients. Add in shrimp paste and thoroughly but very carefully mix until all the ingredients are fully blended and shrimp paste is well distributed. Do not over-mix which might turn the veggies to become soggy. It’s a no-no. They should stay crisp and crunchy. 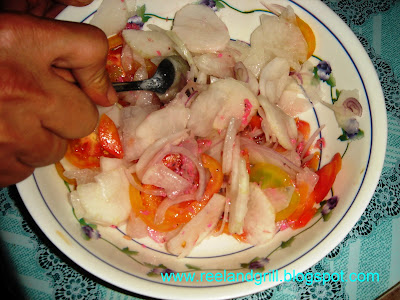 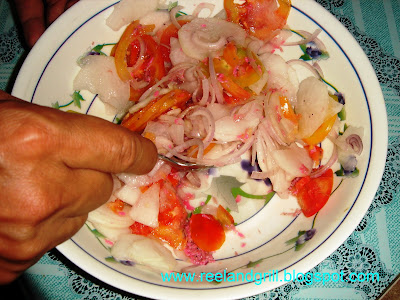 Taste the mixture and add some more shrimp paste if necessary. We added about half a tablespoon more in this mix to attain the balanced taste that suits our taste buds. Finish it off with a pinch of sugar if you prefer. 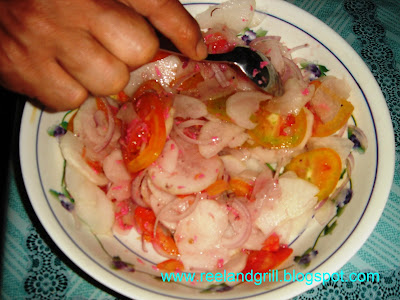 Transfer the salad into serving bowl and serve with any grilled or fried meat or fish. Don’t forget the huge plateful serving of rice. It’s a must. Hmm…Yummy! :-) 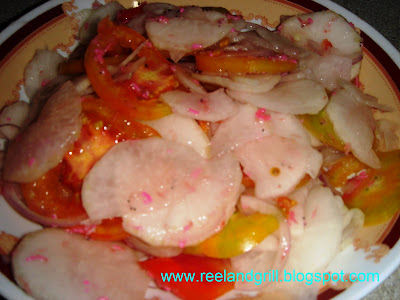 We ate this with our version of home-made pork “tocino” (a type of Filipino cured meat) and we had a truly sumptuous meal. Simply amazing! No kidding. It's so satisfying! 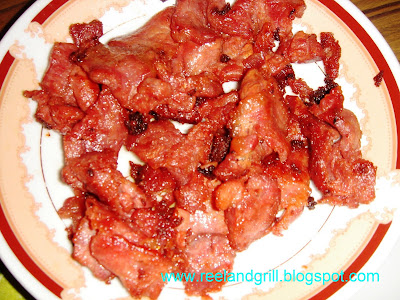 The slight sweetness of the meat in the fried “tocino” and the awesome taste of the salad with its earthy-spicy-peppery-slightly pungent flavor from radish are perfect combination. As always, I ate more than I should. :-( Enjoy! c“,) 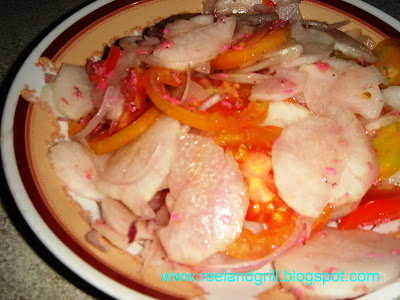 Posted by Cuisinegineer at 10:59 AM