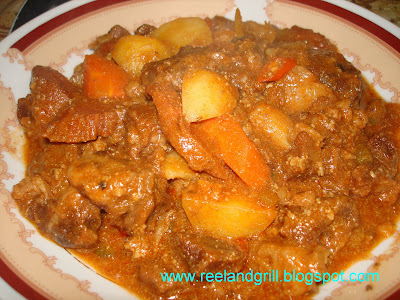 Actually, this should be called Chevon Caldereta in English. After all, goat meat or the meat of the domestic goat (Capra aegagrus hircus), is called chevon when from adults and cabrito or just kid when from young animals. While goat is usually the name for the meat found in common parlance, producers and marketers may prefer to use the French-derived word chevon (from chèvre), since market research suggests that "chevon eater" is more palatable to consumers than "goat eater". Cabrito, on the other hand, is a word of Spanish origin for goat kid, and refers specifically to young, milk-fed goat.

In the English-speaking islands of the Caribbean, and in some parts of Asia, particularly Sri Lanka, Bangladesh, Nepal, Pakistan and India, the word “mutton” is often used to describe both goat and lamb meat, despite technically only referring to sheep meat. Since I am doing the dish here in Sri Lanka, therefore this can be called Mutton Caldereta as well. In the Philippines the dish is called “Kalderetang Kambing”, “Kambing” being the Filipino language for goat.

One of the most widely-consumed meats in the world, goat is a staple of Africa, Asia and South/Central America and a delicacy in a few European cuisines. The cuisines most well-known for their use of goat include Middle Eastern, Indian, Pakistani, Mexican and Caribbean. In the Philippines, goat meat is now a regular fare in important family occasions. The meat is now available in most wet markets and specialty meat shops but commanding quite a much higher price over other meats.

Goat can be prepared in a variety of ways. In India, mutton “biryani” uses goat meat as its primary ingredients to produce a rich taste. Curry goat is a common traditional Indo-Caribbean dish. Slowly roasted cabrito is a regional specialty common in Mexican, Brazilian and Argentine cuisines. Southern Italian and Greek cuisines are both known for serving roast goat in celebration of Easter. In the Philippines, it is cook in many ways too, the most popular and widely accepted of which is the Caldereta. Whilst “Kalderetang Kambing” generally follows the same procedure in Beef Caldereta, a few additional steps are necessary to counter the pungent smell of goat meat. 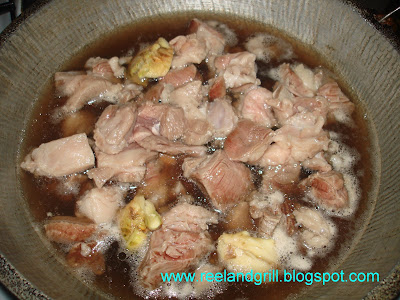 As shown above you have to boil the goat meat first in ginger and vinegar. For the 1 kilo chevron meat which I thoroughly washed and drained several times, we need about 2 pcs of thumb size ginger, smashed, ¼ cup white vinegar and enough water to cover. Put everything in a thick pot and let boil for about 25 minutes. The liquid might become slightly dark and scum will rise on the surface during the process. No need to worry, after boiling, discard the liquid and the ginger and rinse the meat once. Set aside. 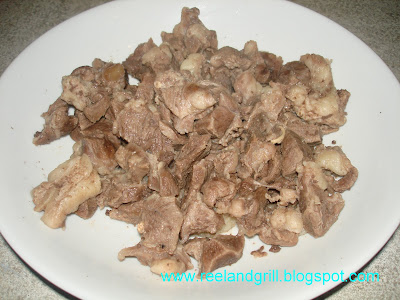 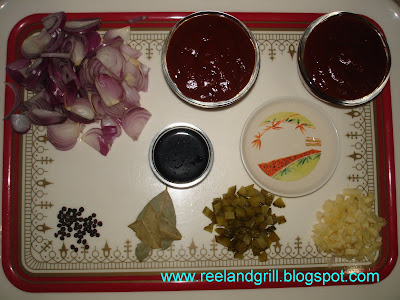 In a mixing bowl or deep pan place the boiled meat and add all the marinade ingredients. Carefully mix everything until evenly distributed and meat is coated with the ingredients. 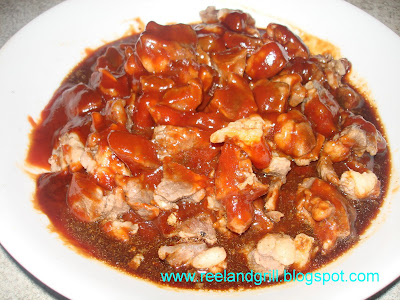 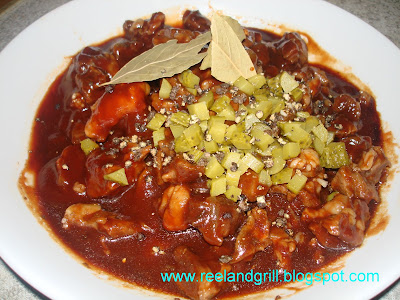 In a heavy pan, heat the oil + margarine and sauté the garlic followed by the onion. Continue sautéing until onion is translucent. On top of the garlic and onion, carefully add the meat mixture. Cover and let the liquid to boil. 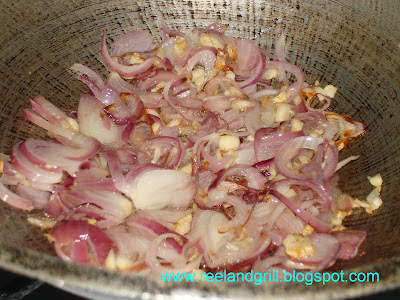 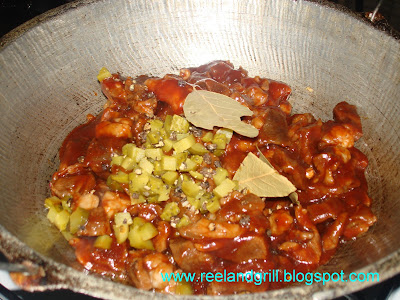 When it boils, stir to blend the garlic and onion below with the meat and other ingredients. Lower the heat to the lowest setting possible, just enough for the liquid to gurgle. Cover and be prepared for the slow process of simmering the meat. If the liquid is drying out, you can add hot water or broth if you have, one cup at a time. 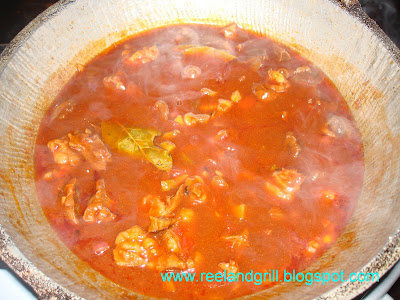 First add the halves potato and let it cook. When it is already tender and soft enough to make into paste, take it out and put all the other final ingredients except the cheese and chicken liver. Stir and continue cooking. 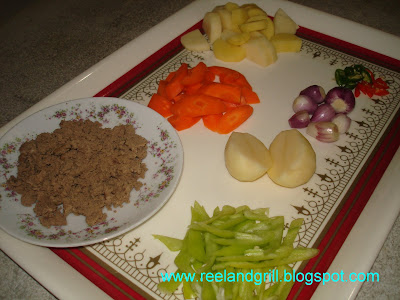 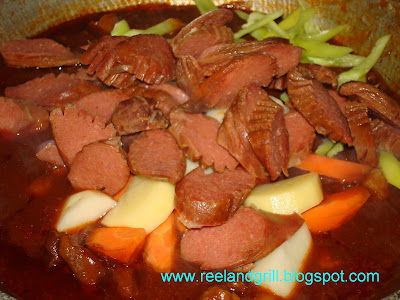 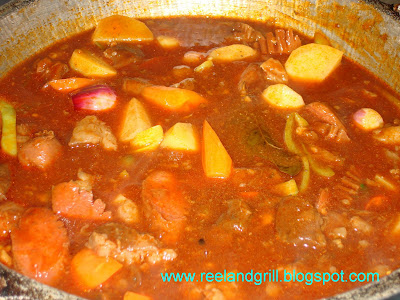 In a bowl, mash the halves potato and mix the liver spread. Add about 3 tbsp of the sauce from the simmering meat and continue mixing into paste-like consistency. Add the grated cheese and mix once again. You can add more sauce as required. 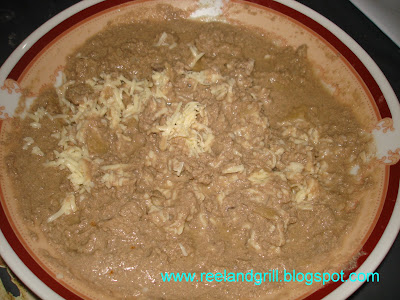 When the vegetables are cooked and the meat is fork tender, slowly stir in the liver-potato-cheese mix. Add the green olives (if using) and continue cooking for some more minutes. 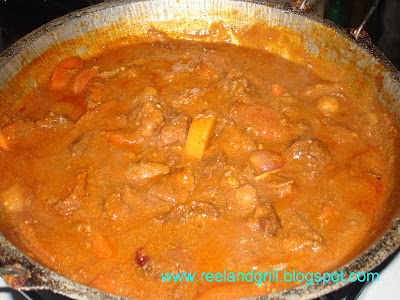 Transfer in a serving plate and serve with a lot of steamed rice. A bottle of your favourite wine goes well with the dish as well. The rich taste and aroma of goat meat makes this dish distinctly delicious. Enjoy! Our group easily ate everything with rice as a midnight snack. I kid you not. c”,) 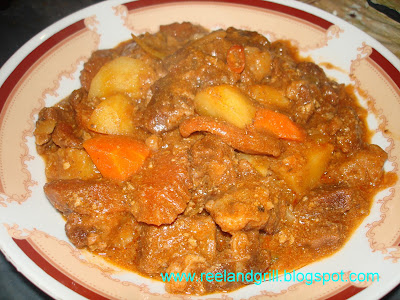