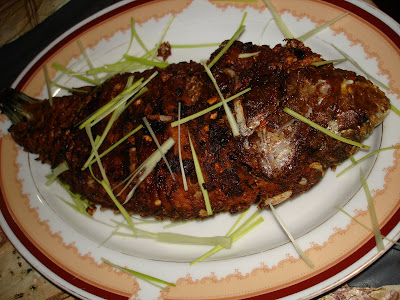 In our family parrotfish is not a regular table fare. As far as I can remember, I only ate this fish two times. The first time was when I was still a kid in our town in Padre Garcia, Batangas. My father prepared it while we watched in awe and amusement because of its color and beauty. The last time was when I’m already working on a road project in Batangas City when a colleague who has an appetite for this fish gave me some for lunch. Although I am so amazed by its vibrant color and beautiful appearance, I’m not particularly impressed by its bland taste and strong smell.

I learned that while its meat is rarely consumed in the US, in Hawaii, parrotfish is especially popular on the dinner table and are a prime target of net fishermen. It is also considered a delicacy in many other parts of the world.

I also once read that parrotfish are better fried, steamed or stewed. In southern Philippines they cook it “tinola” style (stew in ginger with vegetables) for as long it is still very fresh.

For the carolines parrotfish that we caught in our shore fishing adventure, I played safe and decided to just fry it whole. First I thoroughly gutted and cleaned the fish. I discovered that removal of its big scales in quite a tough job already. 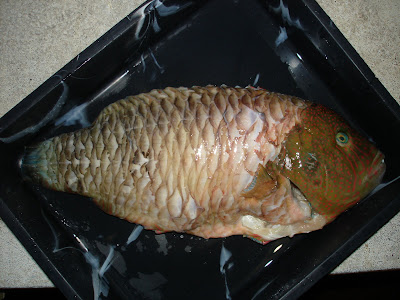 After patting it dry with a table napkin, I marinated it with 2 tbsp minced garlic, 2 tbsp calamansi juice (you can substitute lemon), 1 tbsp sea salt and 1 tsp ground pepper for about an hour inside the fridge. 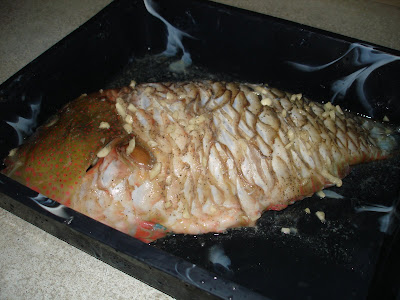 Then I fried it whole in a big pan until golden brown and crispy on the edge. Frying a big (about 5 lbs) whole fish is not easy. My fish even sticked to the pan making it very difficult to turn over. After splatting about 1/4 cup of vegetable oil all over the oven area, my fish is finally cooked. 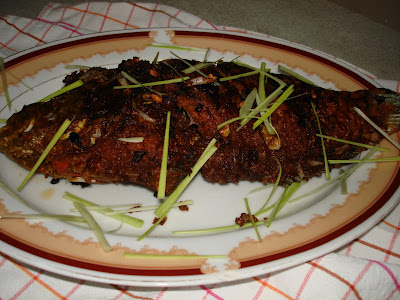 I just mixed some juice of calamansi, soy sauce and chili for that favorite Filipino dipping sauce and served it for dinner with some friends.

I was surprised that the fish was good. Although I may have overcooked a bit due to its sticking on the pan but the taste isn’t bad. The crispy skin, belly and face were my most favorite part. On a scale of 10, this is 7.75, not bad for a fish not really known for its good taste.

Will I eat it again? By all means.
Posted by Reel and Grill at 8:44 AM