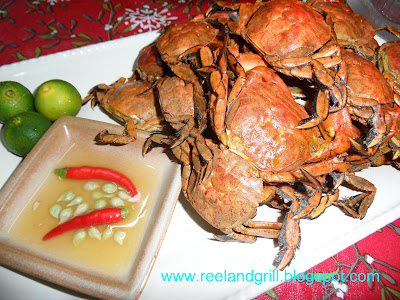 It’s been almost a month since my last post. Sorry! No, probably sorry to me. To compensate for the lost time and opportunities though, at least I have covered and documented some exciting recipes, events, adventures, delicacies, places, things, experiences, etc. in my relatively short Christmas holiday (ahh…it’s going to be always short no matter how) in the Philippines which I will soon feature here one by one. It has been a wonderful vacation and a grand time with families, relatives, friends, school mates and even old old friends. I also have lots of things to be thankful about. For one, my son is now free from his heavy fixator. Yehey!!!

The holiday season is such a momentous time for Filipino foodies. There are lots of authentic Filipino foods everywhere. Every dining table is full with different varieties of dishes. Diet program has been temporarily put on hold by most, including me. In fact, just after the holiday I gained several kilos from over indulging in delectable Filipino dishes. My pretty better half is to be blamed. Whew….now I have a sizeable excess “sex appeal” needs to burn ASAP. And I’m still on a holiday mode and could barely move. :-(

While Christmas in the Philippines is synonymous to food extravagance, I made sure that I also eat some of the most simple but unique Filipino delicacy during the season. One of them is the now hard-to-find “talangka” (Varuna litterata) or shore crab or river crab, a small decapods crustacean that live along river banks and mangrove forests of the Philippines. It is usually harvested to prepare a salted and fermented delicacy called “burong talangka” or the rich and tangy roe paste called “taba ng talangka” or even simply, just lightly salted, steamed and eaten with rice. 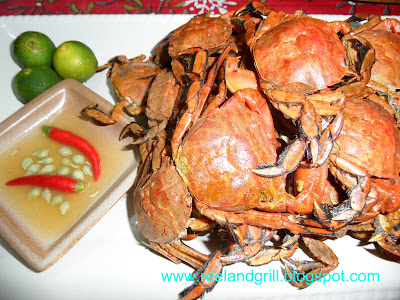 “Talangka” is a perennial favorite of my mom. Even during this period that the tiny crab is rarely caught causing it to command a quite high price in the market; we always buy a kilo or two. Plainly steamed and served with “calamansi + salt” dipping sauce, it is already a satisfying table fare for most members of the family. Of course the kids who belong to the current generation of hi-tech computers, smart phone and flashy gadgets could care less.

“Talangka” used to crowd the river banks and mangrove areas of the provinces of Pampanga and Bulacan (Philippines). The eruption of Mt. Pinatubo in the region which spewed and deposited millions of tons of pyroclastic material or volcanic ash into the environment which then flowed into rivers and water tributaries as massive and destructed lahar damaged much of its natural habitat. It is now rarely caught and their abundance is yet to make a substantial comeback even after around 20 years since the eruption. Be not surprised to seldom see these dark creepy but astonishingly tasty creatures in the local market. It will have to remain that way for some time. 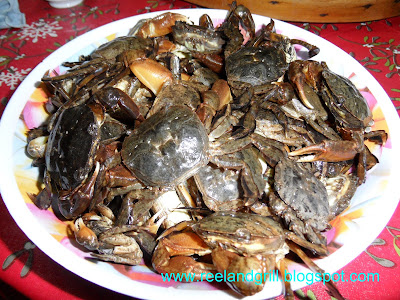 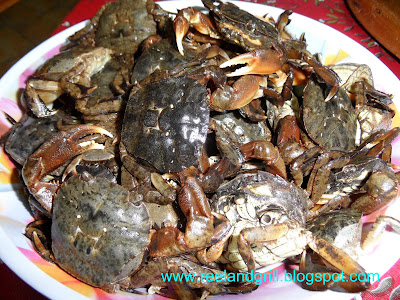 As most crabs are, “talangka” are basically harvested alive, sold alive and cooked alive. That is the traditional way of preparing it but for those who are unhappy with the idea of cooking them while still breathing, you can do the trick being used by most chefs in preparing live king crabs, blue crabs, lobster, sea crabs and mud crabs, they put them first inside the freezer until they are no longer moving. 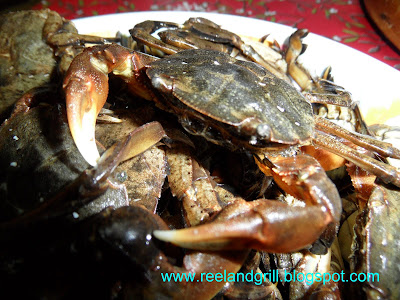 The best “talangka” is of course the female. Well, it has nothing to do with the mentality stuff…….true. :-) Rather, it’s due to its having more of the tasty fat or roe and thinner shell making it a lot easier to eat. Although the male is bigger and meatier, its thick shell is something quite tricky to negotiate. So my mom, whenever she’s buying some, is always on the lookout for that wider apron on the underside of the crustacean suggesting it’s a lady with a pincher. 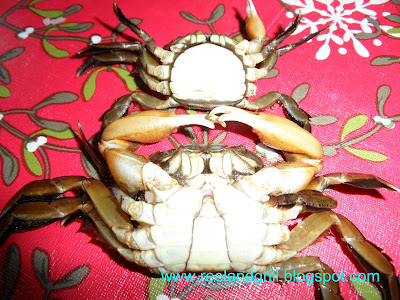 Cooking the crab steamed or “halabos” is very easy. Place the 1 kilogram (about 2 lbs) live “talangka in a deep casserole and wash it several times over running water. Drain it properly. Watch out for the strong live ones as they will try hard to escape out of the casserole. But don’t worry too much; some others will pull them back as they try their own getaway. It’s the “talangka or crab mentality” remember? Just keep an eye to those few physique and skillful who will manage to break away from the packs. They are the “enterprising” which could launch a maneuver and speed sideward to freedom. :-)

Sprinkle about ½ tbsp rock salt on the crabs. Toss them slightly with the casserole lid on. Heat it over medium flame. As it is heated through, watery liquid will come out from their body which will boil and allow steam-cooking. 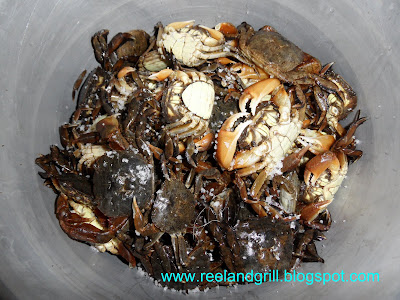 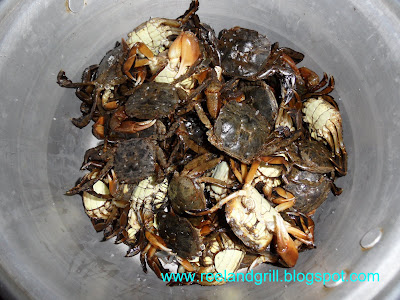 Continue cooking on medium heat until the crabs turn orange in color. You can toss it again (while still covered) to assure even cooking of all the crabs. Cook until the liquid is almost gone and crab top shells are colored bright orange. 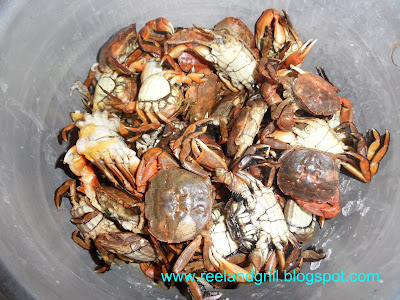 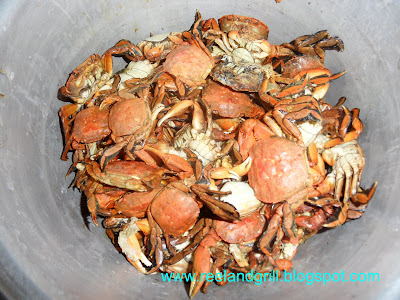 Transfer in wide serving dish and serve with steamed rice and lots of “calamansi” + salt or fish sauce (“patis”) dunking sauce. You can spike the sauce up with chopped bird’s eye chilies if you prefer it spicy. It could well stand as the main meal or as side dish along with some fried fish or grilled meat. 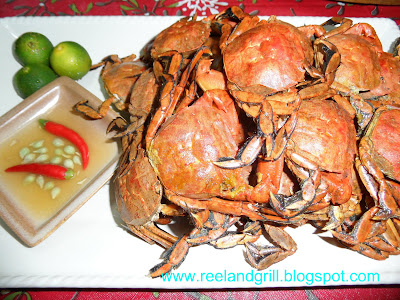 There is not much meat inside the tiny crab. But the tasty tightly pack fat or roe inside the shell are the prized component of the crab meat. It goes very well with the steaming rice. Yummy! :-) 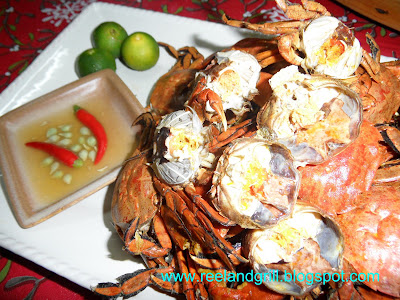 Let’s all hope that the “talangka” of the Central Luzon region in the Philippines could still make a comeback from the abrupt devastation of their habitat due to forces of nature. We look forward to once again see plenty “talangka” roaming our river banks to a level that could support sustainable harvests…….. so that we may continue to enjoy them in our dining table.

I am sure there are lots of Filipinos who miss this delectable exceptional Filipino food. Enjoy! c“,) 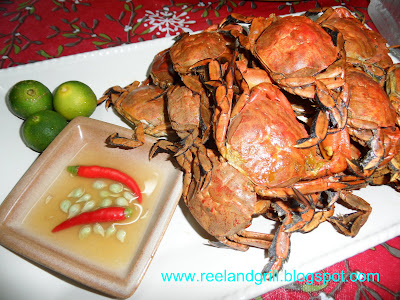 Posted by Cuisinegineer at 9:45 PM