Bopis or Bopiz Version 2 (Lights and Heart Sauteed in Onions, Tomatoes and Chilies) 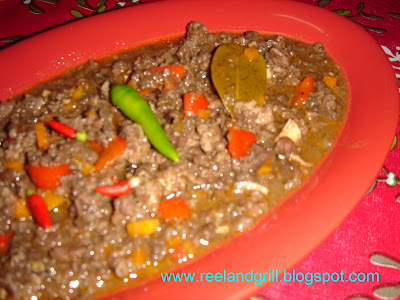 We already have a post about the earthy Filipino dish called “bopis or bopiz” which could be regarded as quite unusual because it is made from the lungs of a swine or sometimes bovine. Such internal organ of a livestock when used in cooking is called lights. For this preparation though, and as always done in the Philippines, I included the heart as well. Having said this, please consider yourself as have been warned about the bizarre or to some extent disturbing nature of the dish we are about to cook. You are advised to leave freely now if you think you are squeamish or faint-hearted and have a feeling that this post will somehow touch your sensitivities.

Please understand that like in many Asian countries and surprisingly Scotland and other European nations, lights or lungs are a common food item in the Philippines along with the heart, liver and even spleen of a livestock or game. There are unique dishes which the common people of our country have successfully developed for the main purpose of using such peculiar meat parts, which other find no or very limited usage in the kitchen, into acceptable daily meals. These I believe are normal occurrences in a country where the population is continuously exploding and shortage of food remains a perennial problem.

As explained before, “bopis” or “bopiz” in Spain is a spicy Filipino-Spanish dish made from finely diced pork or beef lights (lungs) and heart sautéed in garlic, onions, tomatoes, chilies and flavored with natural vinegar. While in the first version I used a parboiled and finely diced lungs, this version 2 will totally omit the parboiling process and directly sauté the finely minced or ground raw lungs and heart instead. As the meat is finer, we could expect the dish to be richer in taste and smoother in texture. 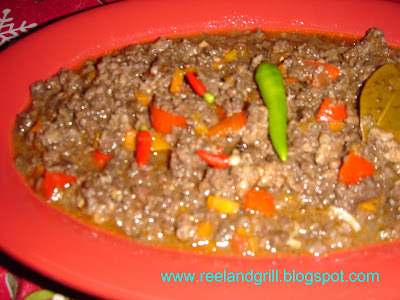 While still in the market, I asked our family-favorite meat monger friend to wash about a kilo and half (about 3.3 lbs) of “bopis” cut meat (combination of lungs and heart) and have it passed through her electric grinder for that instant finely minced texture of the raw meat. It’s swift and easy. 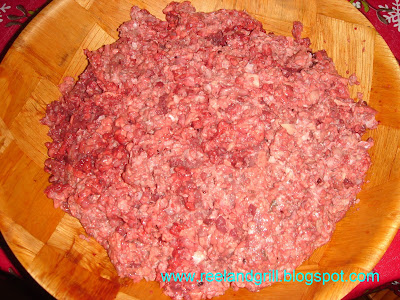 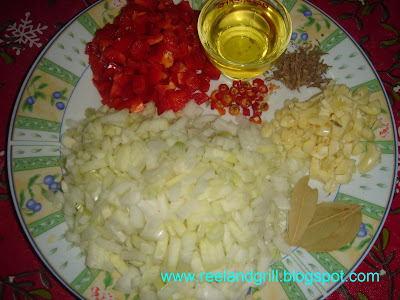 We also need 1 red bell pepper, minced, 1 medium carrot, peeled and minced, 2 tsp salt or to taste, 1 tsp freshly ground pepper, 2 tbsp fish sauce (“patis”) and 3/4 cup natural vinegar or to taste. In addition, you can also include finely minced 1 medium white radish or mooli, if you have, and about 2 cups chicken stock for simmering.

In version 1, I also used 2 tbsp annatto oil (1/4 cup annatto seeds or “atsuete” steeped in 2 tbsp hot oil then strained to discard the seeds) but decided not to include it here as I thought the bell pepper and carrots will already provide a nice reddish color to the dish. But you can use annatto oil if you so desire. It’s actually better to have in the dish. 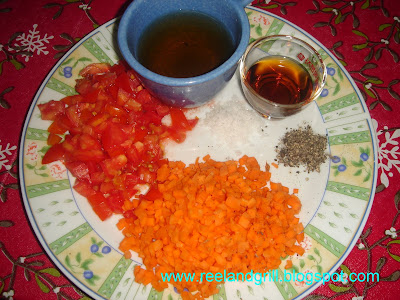 In a large thick pan, heat the 3 tbsp of vegetable oil in medium flame and fry the garlic followed by onions. While frying, add in the fish sauce and sauté until the fish sauce is cooked through and pungent smell is somehow removed. Then add the minced lungs and heart and continue sautéing until the meat, which will render its liquid is sizzling in fat and starting to fill the air with fragrant smell. 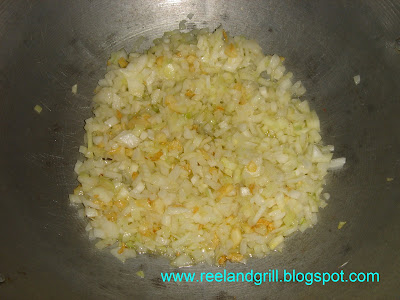 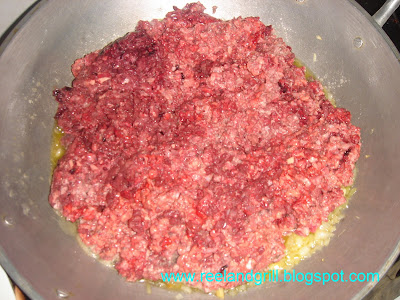 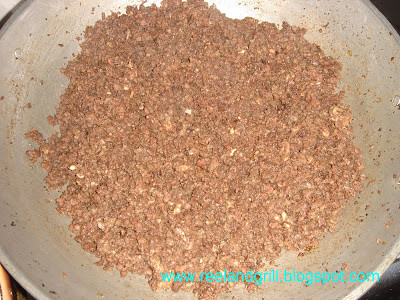 Add in tomatoes, carrot and white radish (if using) and continue sautéing. Add the vinegar, dried oregano and bay leaves and continue simmering uncovered. Let the vinegar boil without stirring. When it’s boiling, stir to evenly infuse the flavor then taste and season with salt and ground pepper. Continue cooking with the lid on for several minutes then taste and adjust the level of vinegar to your liking.

Some like it on the sourly side but I prefer it with a little hint of sweetness which could be attained by using a smaller quantity of vinegar. 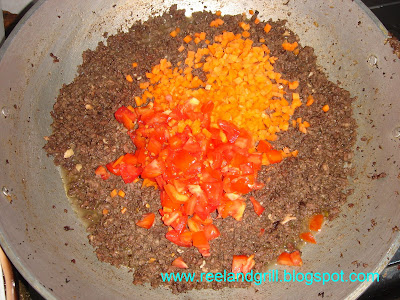 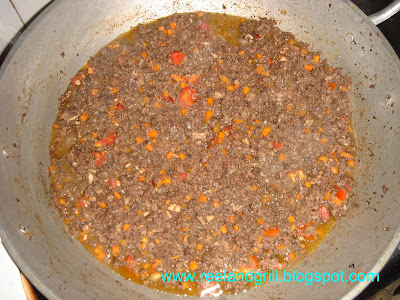 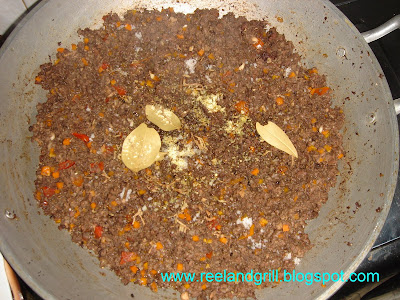 When satisfied with the taste, add enough broth to just cover and continue simmering on low heat. While the liquid is slowly boiling, stir once in a while to evenly mix the flavors. Continue cooking until the meat is tender and the sauce is reduced and has slightly thickened. Finally, add in minced bell pepper and the chopped chilies for the kick and cook for several minutes more. 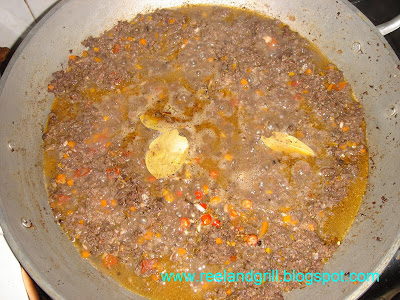 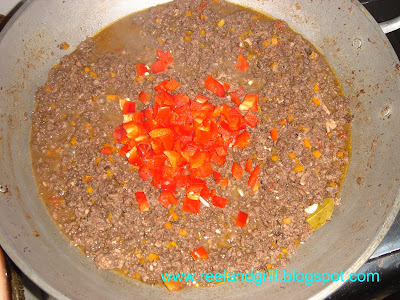 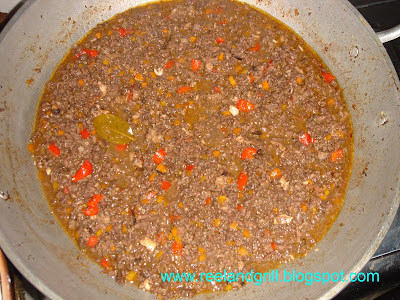 Transfer in several serving plates and serve with lots of steamed rice. Additional chilies could be sprinkled on top as necessary. My dad and I particularly like it really spicy but some family members, especially women and children, prefer the dish just moderately spiced.

As mentioned before, this main dish is also usually served as bites or “pulutan” among group of Filipino men while having a light moment together over several bottles of beer or their favorite alcoholic beverages. :-) 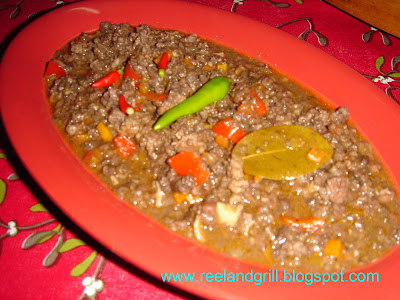 Try this second version of the distinctly delicious dish. It is actually a lot easier to prepare and probably more suited to your discriminating taste as it is to me. It’s vibrantly tasty. Enjoy! c“,)
Posted by Cuisinegineer at 1:42 PM