One of the most highly-sought family dishes that I have not yet shared here is the Filipino egg custard called “leche flan”. On the scale of 1-10 the “leche flan” that our family, the Villanueva’s of Padre Garcia, Batangas, usually prepare is 11. I will repeat that in word just in case you did not get it clear - eleven. I know it’s logically wrong, but it’s hyperbolically true. I kid you not! For me and all of my friends and guests who tasted it, our egg custard is way better than those you can order or eat in any of the 5-star hotels or popular restaurants (at least from all of those that I and my friends have tried), be it in Manila or in any other key cities in the country.

Okay, I may be quite biased here but it is really that good. Wait, make that …… really that exceptional (objectively supplied)! :) Since it’s not very convincing to praise your own trait or sell your own merit, I guess, you’ve got to actually taste it to believe what I’m saying. :-)

The recipe is not really a strictly guarded secret. Nope! Many people knew it. I once talked to someone who uses the exact ingredients but nonetheless produces a much inferior dish. Maybe the recipe or at least a similar or very close recipe is already even published in the internet as we speak. But the meticulous cooking method, involving the careful preparation of the caramel syrup and the slow and controlled steaming process, which knowledge the family developed over a long period of time, makes the difference I believe.

I consider it as an acquired special skill learnt through practice and eventually shared or passed on from generation to generation ……… from parents to children, from mothers to daughters and daughters-in-law, from older sisters to younger sisters and sisters-in-law and in my case, from wife to husband …… although I’ve seen my mother (who diligently and painstakingly taught my better half) and aunties prepared it a countless times during significant family occasions. :-)

But it isn’t the recipe that I will be sharing here now ……… not just yet. Sorry! :-) For this post, I would like to feature my own concoction of the popular dessert dish. Hear me out first. You see the family recipe calls for several cans of condensed and evaporated milk which happened to be too pricy around here. So I developed my own recipe which uses fresh whole milk which is rather abundant and of course very reasonably priced (a.k.a cheap), about 1/8 of the canned milk price compared per unit volume. Besides, fresh milk is what they use in the Portuguese crème caramel recipe which is very similar to the Filipino “leche flan”. 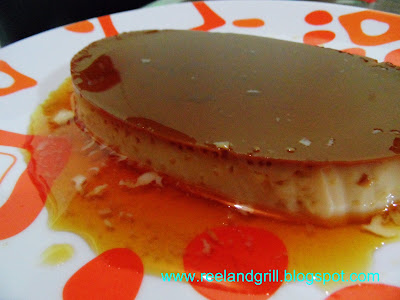 This post is my entry to this month’s Kulinarya challenge under the theme “WHITE” (or off white). Though the final dish will neither be obviously looking white nor off-white, the ecru portion of the custard is more than 90%. Besides it is made from ingredients which more than 90% are white such as granulated sugar, fresh milk, salt and eggs with its albumen or egg white (pure white when cooked). Come on fellow Kulinaryans, this will do right? :-)

As a backgrounder, crème caramel flan or caramel custard is a custard dessert with a layer of soft caramel on top. In the Philippines, the flan is known as “leche flan”, the Filipino term for the originally Spanish “flan de leche” which literally means “milk flan”. However, the Philippine version usually made with condensed and evaporated milk and more eggs (sometimes pure egg yolks) is much heavier than the Spanish flan.

“Leche flan” is usually steamed over an open flame or stove top, although on rare occasions it can also be seen being cooked in the oven like this preparation. “Leche flan” is a top Filipino favorite and a staple in Philippine celebratory feasts like town “fiesta” or festivals, wedding or baptismal affairs, anniversaries and birthdays celebrations and during important holidays like Christmas and New Year.

Preparing “leche flan” is not really difficult although it involves 3 major stages – a) preparing the caramel syrup (this is quite tricky), b) mixing the egg-milk batter (this is uncomplicated provided you know how to strain) and c) steaming or baking the custard (this actually requires practice, patience and attention to details). Rather than explaining each stage, I’ll just try to show it as vividly as possible through images captured as we actually do it here starting with fresh milk, sugar, eggs, salt and vanilla ingredients. 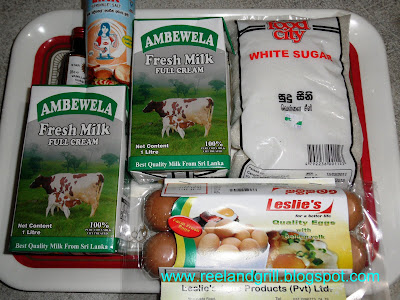 For a single mixing of about six (6) oval aluminum baking or steaming moulds called “lyanera” in the Philippines or three (3) round baking pan (8 inches dia.), the exact ingredients are as follows: for the caramel syrup - 1 cup granulated white sugar and 1½ cup water, divided; for the custard - 2 cups granulated white sugar, 12 farm fresh eggs, 6 cups fresh whole milk, 1 tbsp vanilla extract and ½ tsp salt. Optional add-ons for extra flavor can compose of a small piece of lemon peel and a small piece of cinnamon bark, but I’ll leave that up to you. I’ll stick to the basic ingredients the family use.

To cook the caramel syrup, combine 1 cup white sugar and ½ cup water in a small heavy bottomed saucepan. Heat over medium-high flame with occasional swirling of the pan until the sugar is dissolved. Don’t attempt to stir it with any implement. Let the sugar freely liquefy with the water then caramelize, basically untouched. 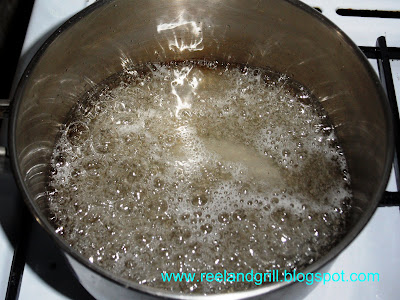 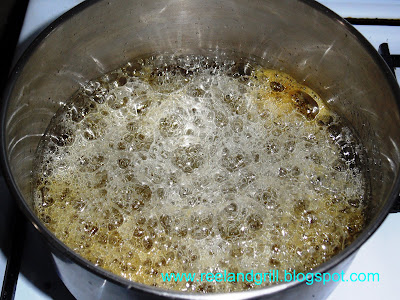 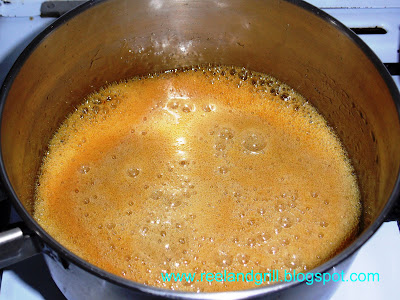 Continue cooking until bubbly. Be ready with the 1 cup water. Adjust the heat to high and continue swirling from time to time as the sugar continues to caramelize and bubbles rise up. Wait for the color to change from light golden to dark bronze tint (reminder: this happens very fast) and the smell of caramel starts to fill the air.

At this point, carefully pour the water to the syrup. Watch out for splatter. The caramelized sugar will frantically bubble up. It’s okay, it will calm down soon after. Set the heat to medium and continue cooking with occasional swirling until the syrup attained a thick homogenous consistency in gorgeous amber color. :-) 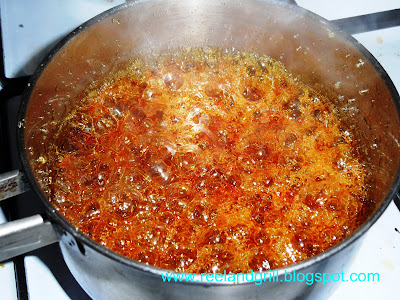 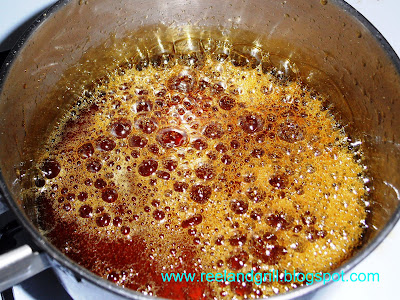 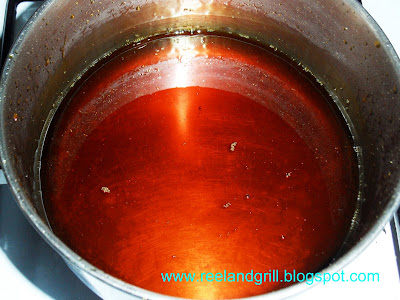 Unlike when using other techniques, you don’t have to hurry pouring the caramel syrup into your moulds, it will retain its thick fluid consistency even after it has cooled down. Provided to get it right, you can even keep it in the fridge for many days or weeks always ready to be used.

To prepare the custard batter, combine white sugar, salt and eggs in a large mixing bowl. Whisk properly until sugar is fully dissolved and has blended with the eggs and sugar. Remember to beat it properly but not so vigorous that will make it frothy. You don’t want that, believe me. 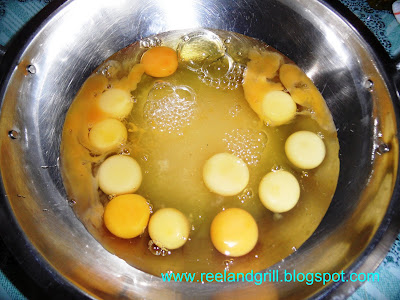 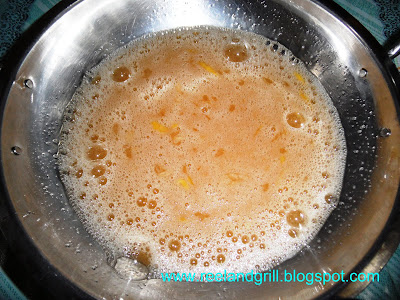 In a large sauce pan over medium flame, heat the milk until just as it starts to bubble. Remove from heat immediately. We need the milk warm but not at boiling point when it will start to curdle. If you are using lemon peel or cinnamon bark include them during the milk heating process. 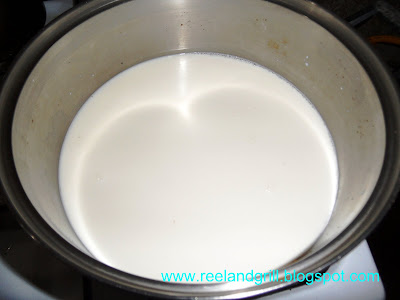 In a steady and slow stream, pour the warm milk to the egg-sugar mixture (discarding the lemon peel and cinnamon bark, if using) while continuously stirring. Go on whisking until the milk has fully blended without causing the egg to cook and curdle. Stir in vanilla extract. 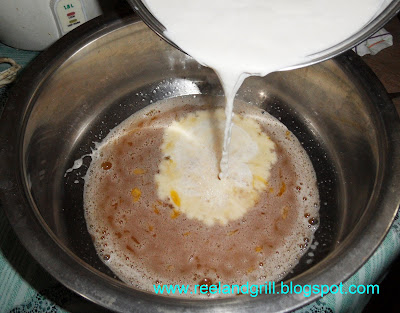 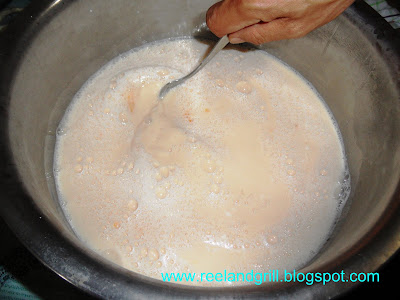 We want really smooth custard, so strain the batter through a very fine sieve. While I normally use a cheese cloth to do this (as practiced by most of our family members), I am now simply using the fine flour sieve for that quick/instant straining without the fuss. :-) 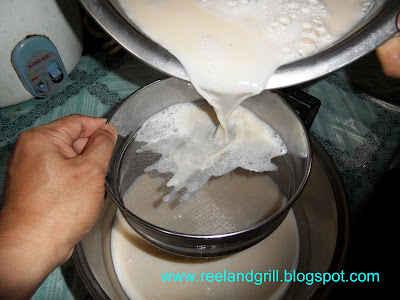 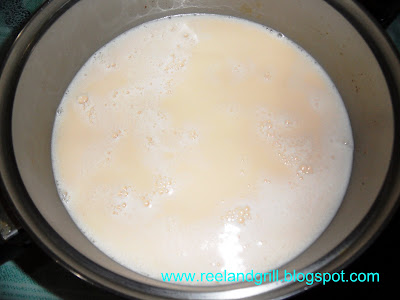 Coat the bottom of the oval aluminum moulds (“lyanera”) or ramekins or any baking/steaming containers you have. Set aside. You can keep excess caramel syrup in a bottle inside the fridge, but I don’t think you’ll have extra with this preparation. 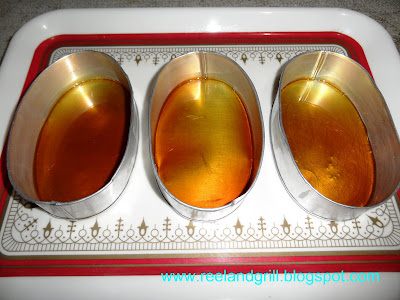 Divide the batter into the caramel lined aluminum moulds or ramekins. Fill it up to about ¾ of the moulds height. Individually cover it with aluminum foil. Place the moulds or “lyanera” in a large baking dish and fill it up with hot water to about 1 to 1½ inches high. 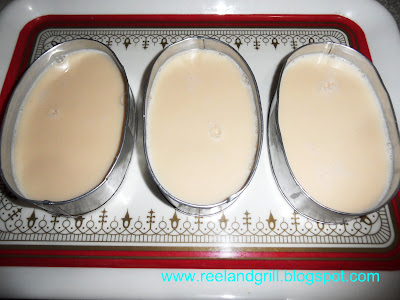 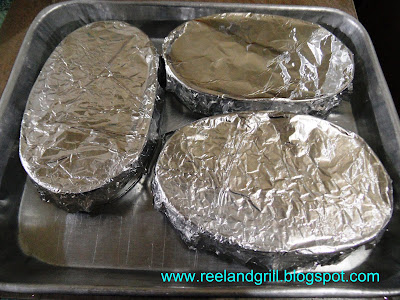 Place it inside the oven which you should have pre-heated already. Okay, I forgot to mention this earlier. Sorry! Bake for 45 minutes in the water bath or until the custard is fully cooked through and already firm. Our oven has some opening/leak issues so I ended up baking it for around 2 hours with even better result. :-) 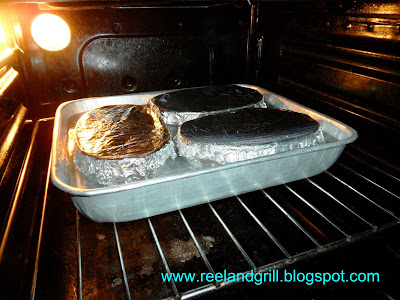 Take it out from the oven, remove the foil covering and be ready to be amazed. 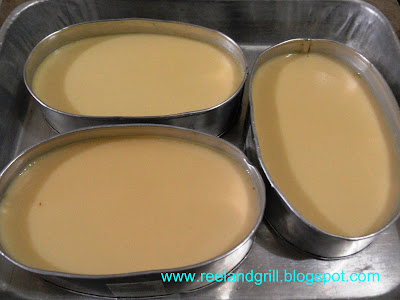 Let the flan cool down then keep them inside the fridge for several hours before serving for the texture to nicely firm up.
Transfer in a serving plate upside down with the luscious caramel on top. Show to your love ones and let them drool a little …… just a little salivation before serving. It will ensure fast digestion without really chewing. :) 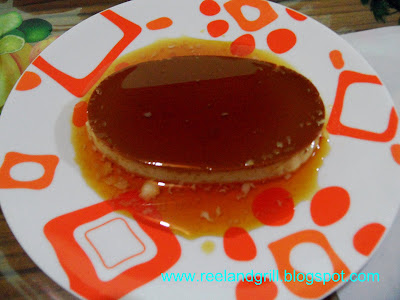 Alternately, you can use the reliable steamer to cook your “leche flan” in various shapes and sizes. Here is what I did with the remaining custard as only half of it (3 “lyanera”) was cooked in the oven. 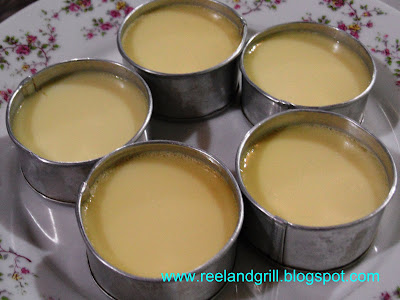 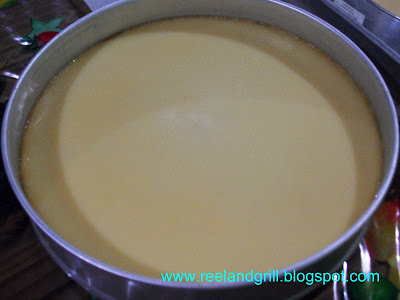 This is one dish we really can’t get enough of. I prepared 3 moulds last time and it keeps us hanging. I doubled the volume today and we still want more. No matter how I plan, it seems the flan will instantly be gone. 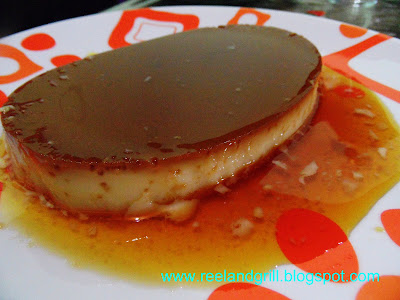 Please check out the entries of other Kulinarya members with their delightful white Filipino dishes. I’m pretty sure you’ll enjoy them as much as I do. If you’ll see theirs as really white, just think mine as flaming white. Enjoy! c“,)
Posted by Cuisinegineer at 4:29 PM