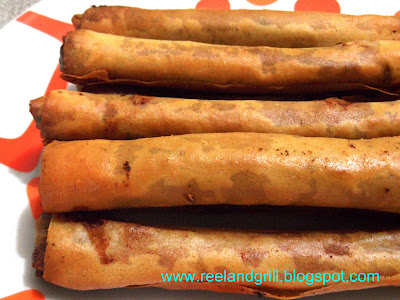 Have you heard of the prideful name “Global Filipinos”? Okay that’s quite tough. How about the enterprising brand “Overseas Filipino Investors” or “OFI”? It still doesn’t ring a bell? Or you probably have a hint but not quite sure. Well, the two labels are the same as the most used (and abused) “Overseas Filipino Workers” or “OFW” (I am referring to the word of course). The shortened version is simply known as “Overseas Filipinos”. I bet you now know this. You hear and read about it so often that it could have already involuntarily left a permanent mark in one of the faculties of your mind. It’s in the news, magazines, internet and even books.

The popularity (or infamy) is not surprising though. After all, it represent a rather large but very silent group of Filipino people scattered all over the world with only one thing in mind – to WORK ……… and I mean really WORK HARD at that. Just how big this group is amazing ……… about 10 million ……… more than 10 percent of the entire Filipino population distributed to nearly all major continents of the world. That’s 20 million skilled hands contributing to the world’s economy from the tiny islands collectively called the Philippines.

Culinary speaking, that’s a lot of people missing their native foods back home. I’m one yeah! More so for those who are in countries where there are some levels of prohibition (due to religious affiliation or the likes) to the foods we grew up with like in the case of pork in the Middle East where about 4 million pork-loving “Overseas Filipinos” are working. Or in the far North American or European countries which geographically could not sustain the cultivation or raising of vegetable and foods commonly grown in the tropical Philippines and thereby leaving close to 5 million “Global Filipinos” (such an endearing title) craving for “tawilis”, or “saluyot” or “talangka” or “gatas ng kalabaw” or “talbos ng kamote” or “bulaklak ng katuray”. :-)

Relative to this, I wish to share a variant recipe of the well-loved Filipino meat spring roll called “lumpiang shanghai”. Specifically a type you can easily cook while living in the Middle East where pork, the main ingredient, is not available and chicken fills up most of the areas of the meat section of groceries. Thus, this is chicken meat spring roll ……… your tasty alternative for the crunchy, mouth-watering and pleasurable “lumpiang shanghai”. Did I mention I had a beautiful childhood memory and long standing infatuation with this dish? :) 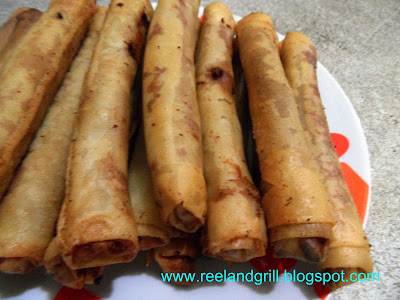 Minced or ground chicken is the replacement “star” of this preparation. The leaner ground chicken breast is probably the one usually available in groceries and meat shops but that’s a nay for me. I believe for spring roll, minced meat should be juicy and contains up to 20 percent fat (80-20 lean to fat ratio) for it to be truly tasty and not boringly dry.

Therefore, while using chicken breast would be a lot easier and will probably give the most yields, I always use meat from skin-on boneless chicken legs (and thighs) in spite of the difficulties deboning them. For me, these are the most amazing cuts of chicken I can always depend on even when minced meat is what the recipe calls for.

So for this version of “lumpiang shanghai”, cup up boneless chicken legs with a net weight of about 1 kilogram (2.2 lbs) is all we need. 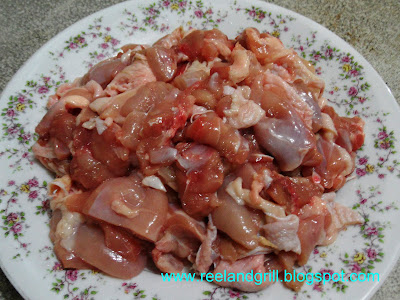 I consider personally grinding meat, whenever you have the liberty of time, an added factor in pretty much ensuring a clean and high quality minced meat like this ground chicken: 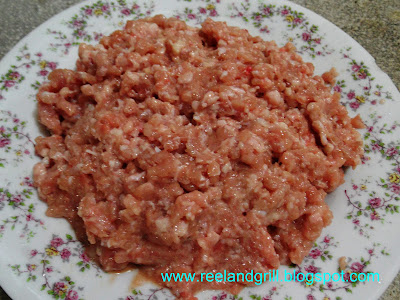 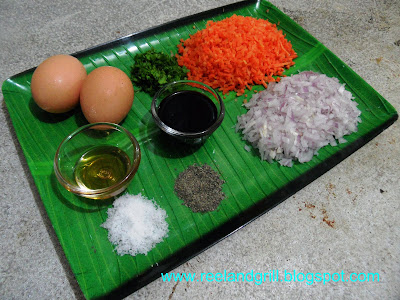 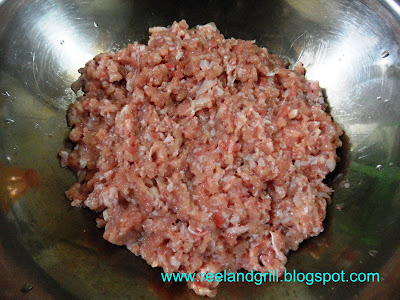 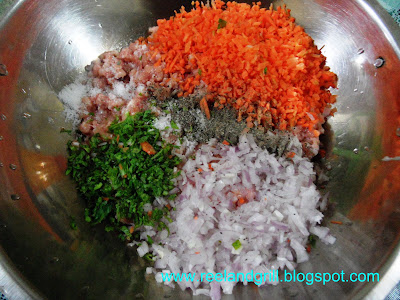 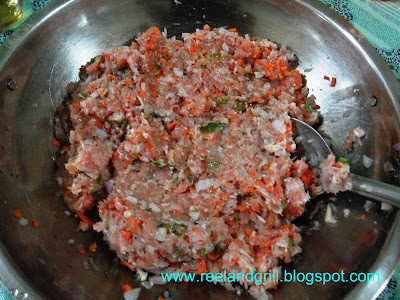 Add in soy sauce, sesame oil and eggs. Carefully stir them in with the meat mixture until everything is held together and a homogenous filling is attained. Taste and adjust salt and/or ground pepper as necessary. 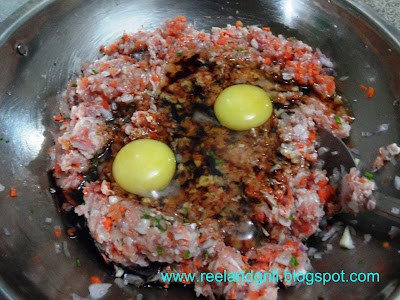 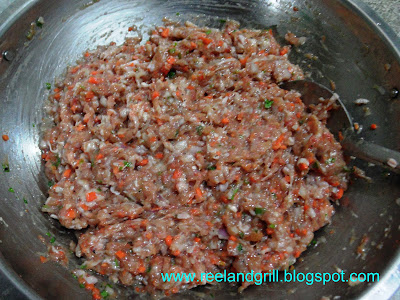 Take about 1 and ½ tbsp of the fillings and wrap to about half an inch diameter spring roll. Continue rolling and wrapping until you consumed all the mixture. This is good for about 50 pieces spring rolls.

Since we are all so eager to have a bite, I stopped half way with about 25 spring rolls fully wrapped and started frying. :-) 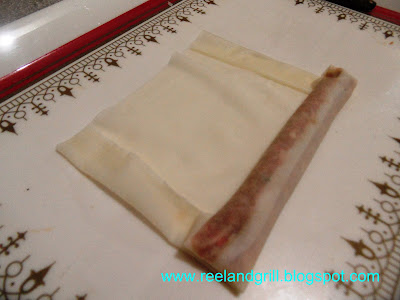 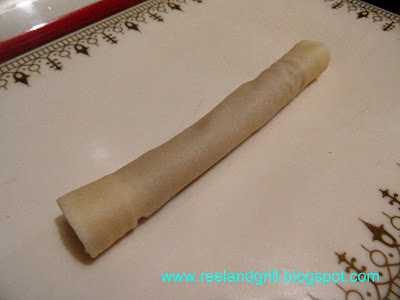 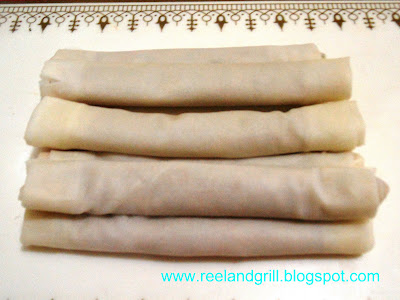 In a wide non-stick frying pan, heat the oil and fry the spring rolls in batches. Cook both sides in moderate heat until golden brown. As I said before, having the correct oil temperature is really important. Have it too hot and the wrapper will burn, cook over insufficient heat and oil will enter the roll. 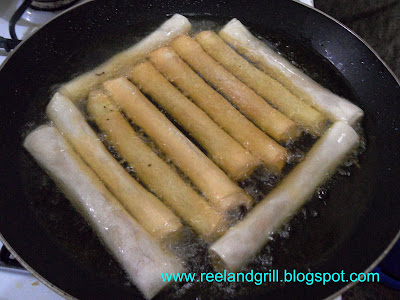 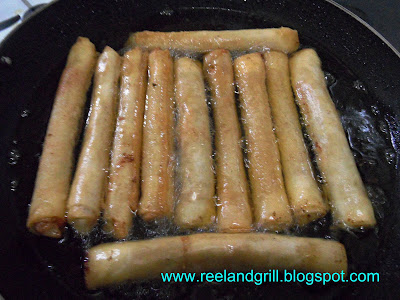 Thoroughly drain excess oil from the fried “chicken lumpiang shanghai” using layers of table napkins. Why mine looks like bond paper, because it is. :-) 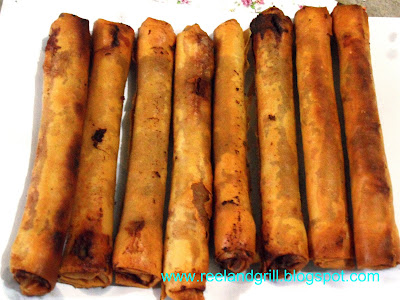 Transfer in a serving platter. Serve them hot and crisp alongside your choice of dipping sauce such as tomato ketchup, sweet chili sauce or the better yet the unique Philippine “banana ketchup”. Spiced vinegar also works well if it is your thing. Yes, it’s delightfully good even on its own. :-) 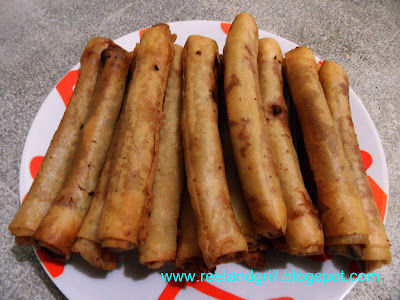 Since I stopped halfway of wrapping, I have excess filling. You can keep this in the freezer for next time batch of spring rolls or as an alternative; this could be used in making chicken burger. Just form them into patties and grill or fry away. It’s so yummy too! 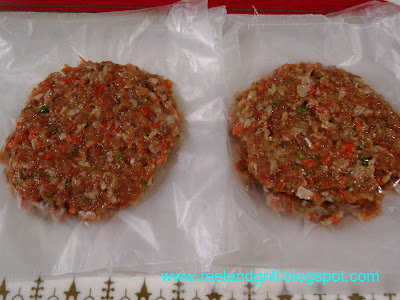 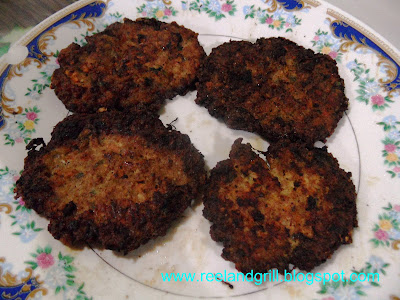 This exciting spring roll version can be served as a snack, an appetizer or as a main meal with steamed rice. It also makes a delicious breakfast alongside fried rice or fried noodles. 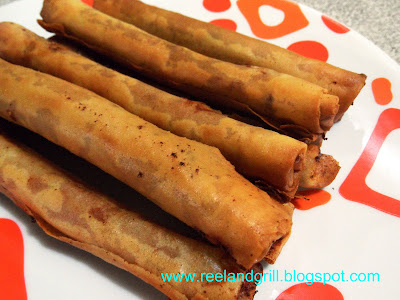 You can still enjoy “lumpiang shanghai” even when you don’t have access with pork, do it with fish meat like in the fish spring roll I posted before or better yet use the reliable chicken which for sure you always have in your kitchen be it home in the Philippines or abroad in the Middle East! c“,)
Posted by Cuisinegineer at 2:00 PM