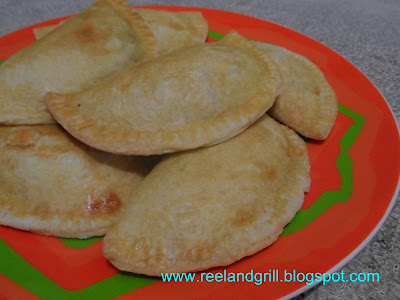 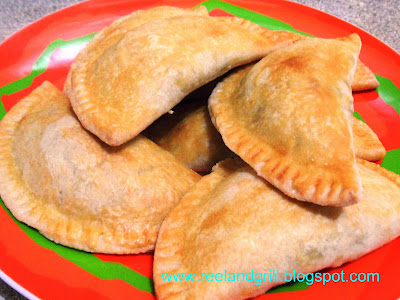 Outside of the generic or common empanada preparation popular in Manila and other key cities in the Philippines, there are regional types which are uniquely delicious like the deep fried crisp-crusted Vigan empanada of the Ilocos Region where shredded green papaya, bean sprouts, egg and sometimes chopped local sausage called “longanisa” are used as stuffing covered in a thin orange pastry made from rice flour with annatto (“achuete”). I hope I would be able to feature this soon as I have long been planning of doing my humble version of this snack dish slowly getting widely popular as it penetrates the mainstream food market.

But first, let’s prepare this common chicken and pork empanada. It’s been a while since I last made this stuffed bread. Cooking the filling is not really difficult but kneading and rolling the pastry and assembling the empanada is sometimes too demanding for a tired body that just retreated from a 10-long hours of office works. Okay, okay, sometimes there is some level of laziness involve here. :) 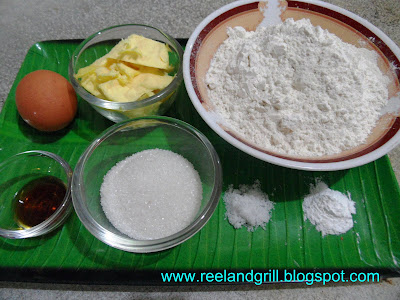 In a wide bowl sift the flour. Add in baking powder, sugar and salt and combine together. Cream the softened butter or margarine with the dry ingredients. Add about four tablespoon of water. Continue mixing until it resembles coarse breadcrumbs. Lightly knead the dough until it just about comes together. Add small amount of water as necessary. Knead until the dough is smooth then form it into a ball.

Rest the dough ball. Wrap it with plastic or cling film and chill in the fridge for 30 minutes. 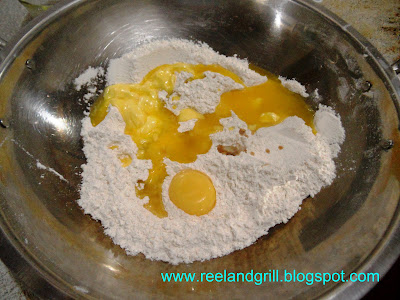 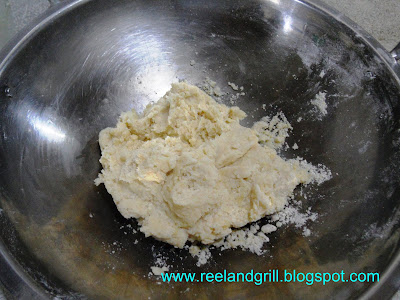 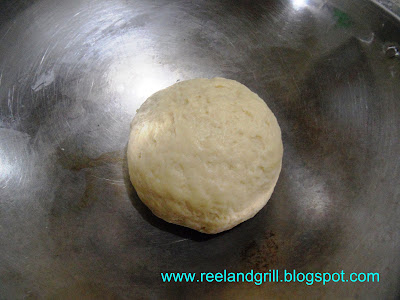 The meat ingredient is a combination of minced chicken and ground pork, about 300 grams each. My chicken came from skin-on chicken legs (and thighs) and the pork came from pork leg with some fatback which I both personally minced using meat grinder. Please choose meat with 80-20 lean to fat ratio ……… unless it’s medically prohibited. 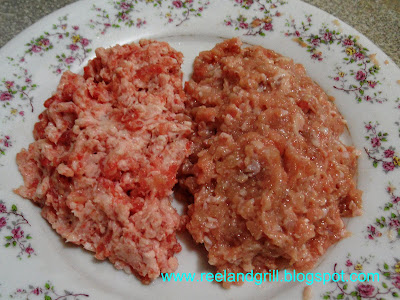 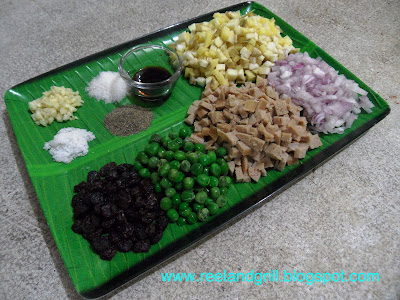 In a wide non-stick pan, heat butter or margarine and fry garlic followed by onions. Add in minced pork and continue cooking until it renders its liquid. Continue sautéing with occasional stirring until the liquid is reduced and the meat sizzles in oil and own fat. Add in Worcestershire sauce, sugar, ground pepper and salt and continue cooking. 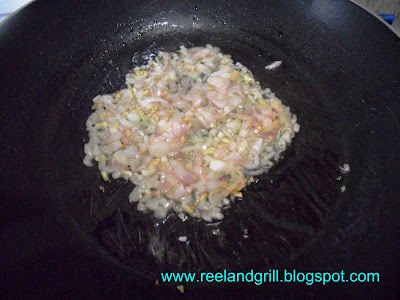 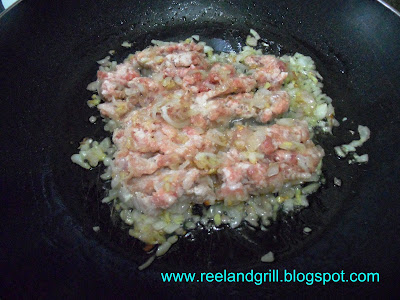 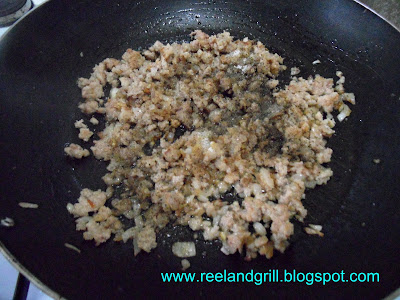 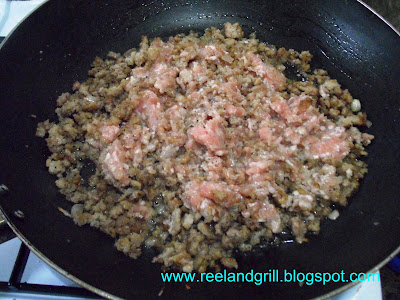 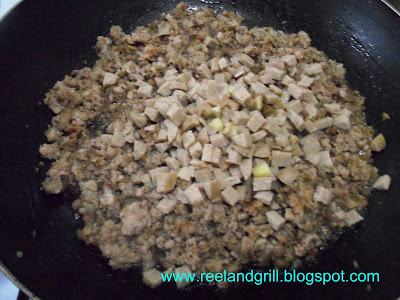 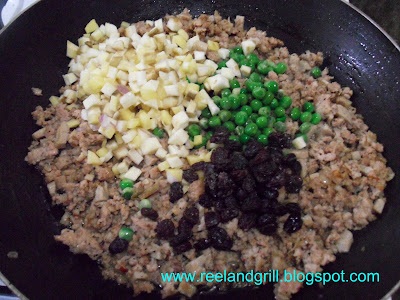 Add in remaining broth and simmer further until everything is cooked through. Taste and adjust the seasonings. Cook further until liquid has dried up. 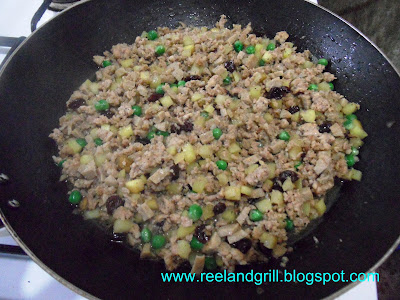 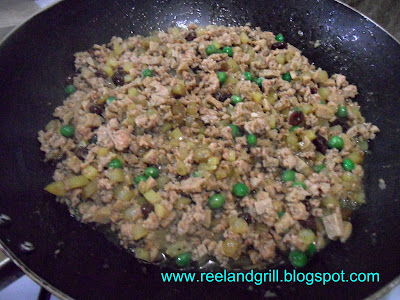 Transfer in a large bowl and set aside. If you are starving get some steamed rice mix in some of the filling and eat away. Yummy! :-) 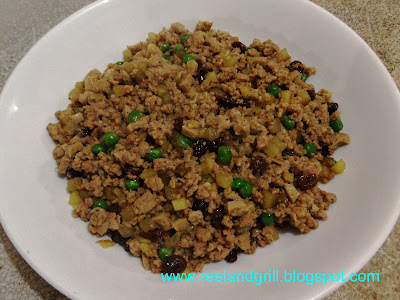 Take the rested dough out from the fridge. Form into a log and divide into 10 equal cylindrical pieces. Don’t worry if you can’t cut swiftly and straight and some ends up resembling truncated prisms or elliptic disk, though highly technical and very engineering, it’s not actually important here. :)

Using rolling pin, flatten each piece to a thin round sheet of about 3 mm or 1/8 inch thick and 150 mm or inches diameter in a floured surface. Use extra flour to easily work in the dough. 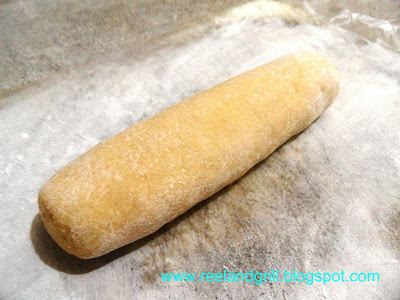 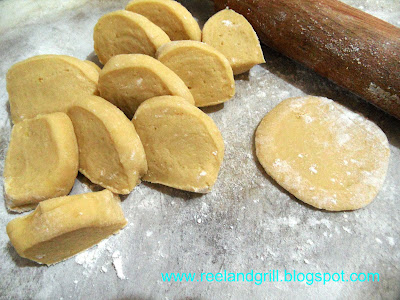 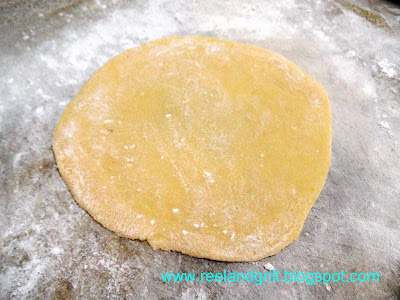 Put about 1½ heaping tablespoons of fillings on one side of the pastry sheet. Add halve hardboiled quail egg on top, if using. With a small brush wet the pastry edges with water then fold the other half to cover the filling forming a half circle. Carefully work in the edges to stick side by side for a nice seamless seal. Don’t worry if it’s not too perfect though. Finish off the edges by pressing it with the tines of fork for that pretty looking empanada.

Do the same for the rest of the 10 pieces rolled out dough. The stuffing is good for about 20 empanadas so you will still have half of it at the end. Keep it in the fridge or freezer for future use which I’m sure will be very soon. 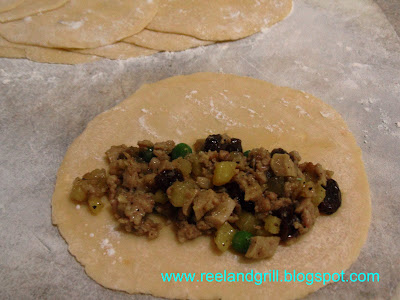 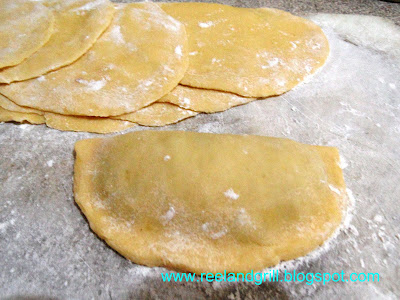 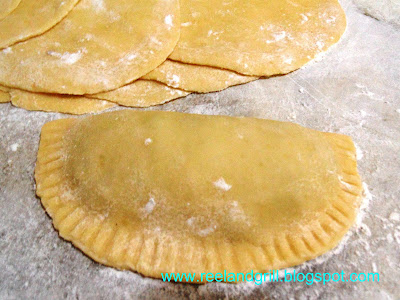 In a baking sheet thinly coated with oil and dusted with flour, arrange the folded empanadas. Don’t bother asking why I have eleven and not ten. :-) Apply a thin coating of egg wash on the top of empanada for that golden brown color after baking. I scrimped a little and just use the excess egg white from the pastry mix instead of 1 egg + 1 tsp milk for egg wash. Don’t be like me, you’ll see why later. 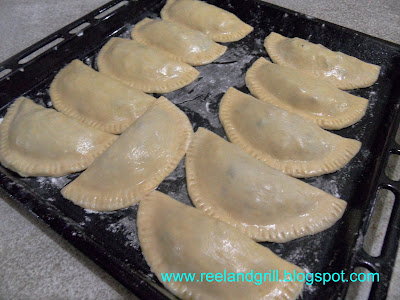 Stick it in the oven and bake for around 25 minutes or until the pastry is cooked through and top is shiny golden brown. Since I scrimped on the egg wash, mine came out pale and flat in color :( ……… but sure tasty nonetheless. :) 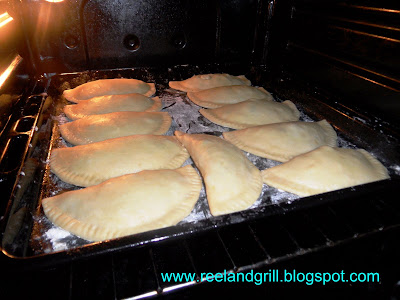 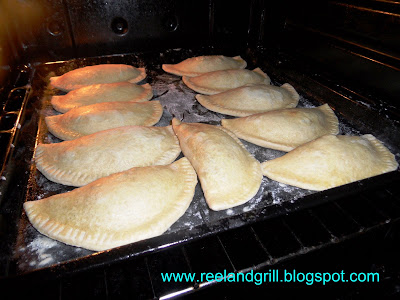 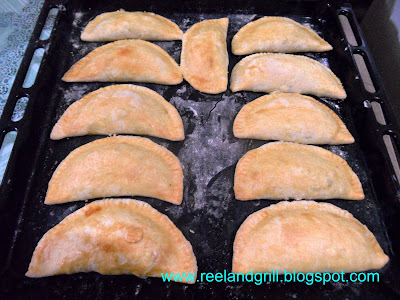 Transfer in a serving platter and serve while still hot alongside a refreshing drink. I prepared this for more than 2 hours and yet the 10 empanadas are gone in 10 minutes. Plainly saying tasty or yummy is an underestimation. :-) 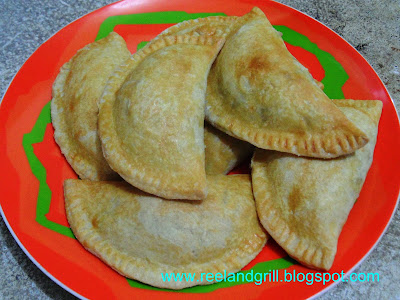 Try and you’ll surely love it even if empanada is not your comfort food. By the way, I secretly kept the extra one for my snack the following day at the office. You bet it’s still delightful! c“,)
Posted by Cuisinegineer at 9:09 AM