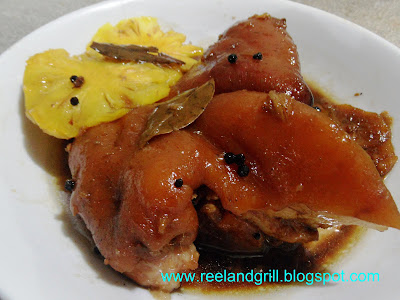 Here I go again playing with “pata”. As I have mentioned many times in this blog, I really like the versatile “pata”. The popular Philippine cut of pork that consists of the whole hand or arm in the front and the lower part of the leg below the round (“pigi”) in the rear of the swine. Collectively, it includes the ham hock or knuckle as well as the trotter. While I also like trotter, especially in “crispy pata” where it is very tasty and crunchy, for some reasons it is not sold (and probably discarded as waste) here in Sri Lanka so the cut that I will use for this special dish is basically the meaty knuckle or ham hock section only.

But it’s a good thing because the intended dish is “pork hamonado” (also called “pork pina hamonado” or just “pina hamonado”) where the trotter, composed mainly of rind, bones and tendons, will not particularly work well, unlike the hock or knuckle which is so damn good for the dish. Pardon the use of word please. :-)

“Hamonado” is a Filipino dish prepared by slow cooking a thick slab of pork (can be belly/“liempo” or shoulder/”kasim” or like in this case, hock/“pata”) in pineapple juice, sugar and soy sauce. The ending dish is a somewhat cured and sweetened meat that is so rich, flavorful and succulent. It is of course oily with fat and rind covering the lean meat but that’s actually the best part of it ……… seriously, it’s so wonderful ……… could be a little unhealthy but really awesome ……… at least for me ……… and to many people I know. :-)

I have one problem though doing this dish here in southern Sri Lanka. I have no or very little access to good quality canned pineapple juice (like Del Monte or Dole brands from the Philippines). So, like when I prepared the “estopado” (braised in pineapple juice), I will also use fresh pineapple instead. 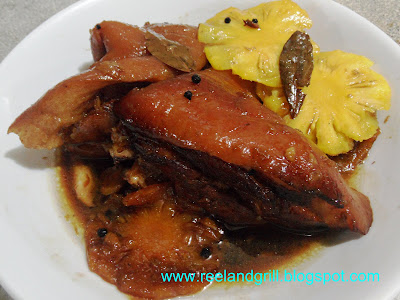 Similar with “pata tim” (cooked in soy sauce), the meat in “hamonado” is basically simmered (as whole) over a long period of time until the meat is so tender that it could almost fall off the bones and fat layer is gelatinous. Whew…this is making me starve so we better go on.

For a rather large group of 5 hungry males, we purchased 1 large piece of ham hock, about 1.25 kilograms or 2.75 lbs. As usual, the meat is properly washed; skin is vigorously scrapped of blemishes and impurities and rinsed several times until looking neat and smelling clean. :-) 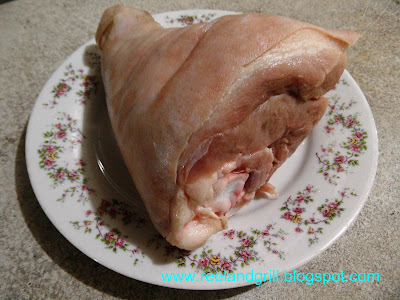 Although commonly reserved for special occasions, cooking “hamonado” is not really difficult. It may look intimidating at the onset but the process is actually simple …… much simpler than most thought. 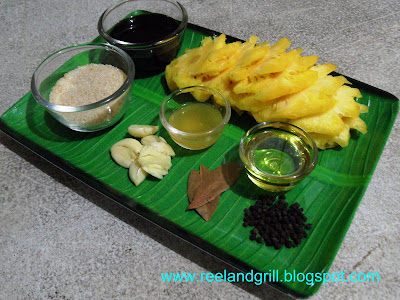 The first step is to evenly marinate the whole pork hock with a mixture of the “calamansi” juice and 1/6 cup or ½ of the 1/3 cup soy sauce for at least an hour. Flip the meat over several times for uniform infusion of marinade. 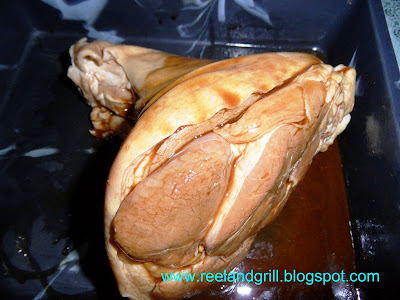 Since I have no pineapple juice and afraid that one small pineapple will not suffice to supply the needed amount of pineapple flavor, I go overboard and decided to boil the peel and eye cuttings to further extract some pineapple syrup, about ½ liter.

If you noticed in the list of ingredients, I included the word, “properly washed” (I actually brushed it) to the pineapple. This ultimate ……… make that desperate …… step is the reason. I need the pineapple peel to be really clean and thus safe for boiling and squeezing. :-) 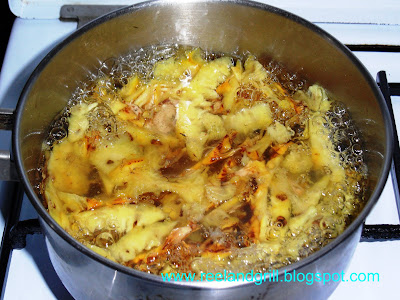 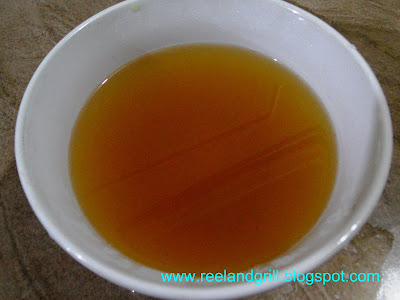 In a large wok or pan, heat the oil on high flame and sear the marinated “pata” on all sides until lightly browned. Worry not if some surface cannot be seared. It’s still fine. But be careful not to overdo it like the one side in mine. :) 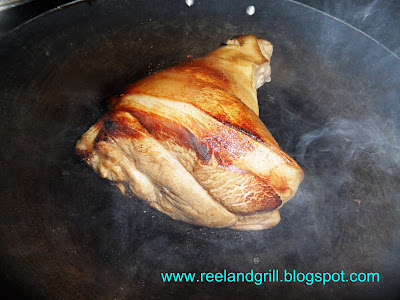 Using a heavy bottomed casserole, arrange the “pata” at the middle along with the pineapple, reserving 2 slices for garnish later. Add in garlic, peppercorn, bay leaves and brown sugar. Pour the remaining marinade, pineapple syrup, balance soy sauce and about 2 cups broth. Cook on high heat until boiling. 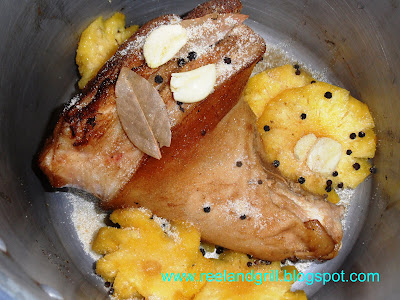 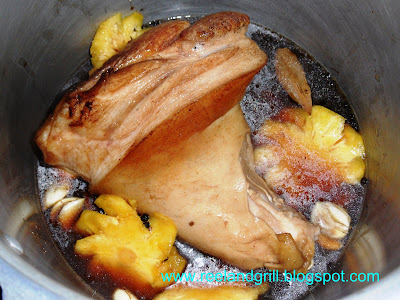 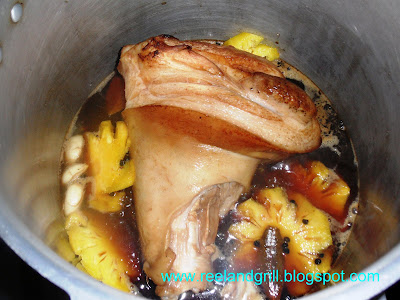 Adjust the heat to the lowest setting possible with the liquid barely boiling. Be ready to simmer for several hours or until the meat is very tender. Turn the meat over from time to time for even cooking. Add additional broth or hot water as necessary, 1 cup at a time. Taste and adjust the seasonings if still needed. I did not. 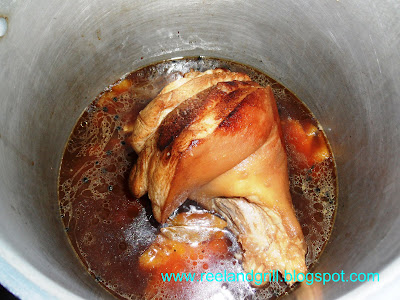 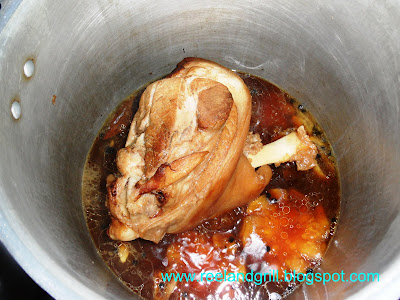 Towards the end, I cut the bulky meat into two large pieces so that it could be properly submerged in the thickening sauce. 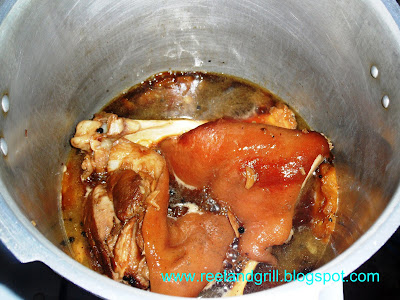 When the meat is very tender and sauce is reduced to a thick consistency, place the reserved slices of pineapple on top of the meat and cook for several minutes more or until the pineapple is cooked through but not mushy. 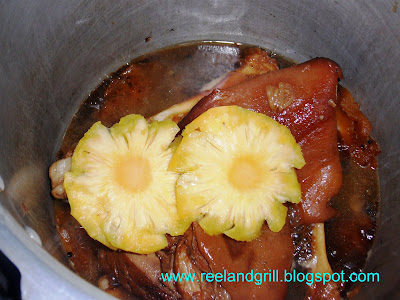 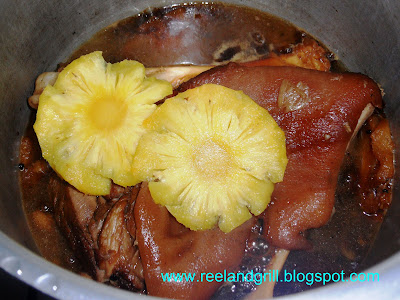 Transfer the glazed pork on a large platter, pour the rich sauce and garnish with the pineapple slices. For the dish “yummy” is an understatement! :-) 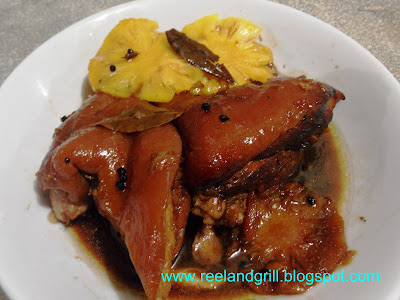 Served with hot steamed rice and eat like a master ……… conquering your guilt. This is utterly luscious and every bite is worth setting your diet fear aside. You will tend to promise sweating it out tomorrow, I’m sure ……… even if you really can’t or have no intension of. :))

Yes, this dish ruined my diet …… in a very delicious way. All I can say is enjoy ……… but don’t tell me you were not warned! This is addicting! c“,) 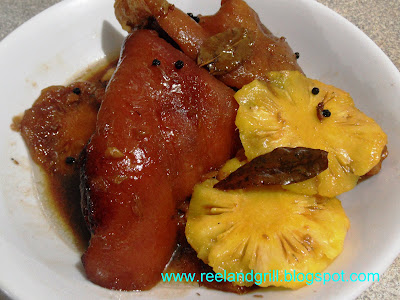 Posted by Cuisinegineer at 3:47 PM