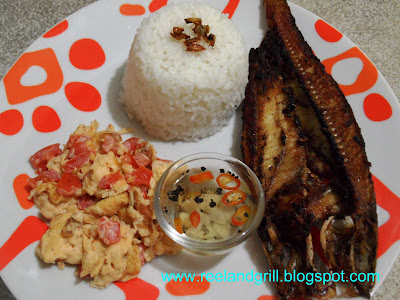 This is good. If you like “daing na bangus” (fried vinegar & garlic-cured milkfish), this is a fine alternative. If you have not yet eaten a flying fish your entire life but keenly considering tasting one, I believe this is the proper dish to sample the sleek fish ……… to somehow ensure a memorable dining experience and establish a deep connection with the fish ……… and probably ……… just probably …… it will transform you into a permanent flying fish eater or consumer, like me and my friends here in our project. :-)

Flying fish or “bolador” (which literally means kite) as referred to in the Philippines or “piyamassa” as called here in Sri Lanka is a shiny, elongated, silver-blue marine fish that lives in all of the tropical and warm subtropical oceans. Their most remarkable feature is their strangely large pectoral fins that resemble dragonfly wings which during gliding it spreads and tilts slightly upward to provide lift and folds clear to reenter the sea surface smoothly at the end of a glide.

The astonishing fins, with the aid of its strong lopsided tail fin, enable the fish to leap out of the water and take short gliding flights through air just above the water's surface for the purpose of hiding and escaping pursuing predators which include some of my favorite (in my dreams) game fishes such as tuna, swordfish, sailfish and marlin. For anglers like me, the sight of leaping flying fish is not only scenic but also indicative that our target fish is roaming around. :-)

While we in the Tarlac Anglers, only use the glossy flying fish as bait to catch bigger and more exciting pelagic fishes via trolling, it is now among my target species. :) If landing it with hook, line and rod proved difficult, I may either try gillnetting as it is commonly harvested in Japan or dipnetting as it is usually catch in Indonesia. Either way, some adult ones (not juvenile please) should end up in my skillet, sizzling away in hot oil. :) 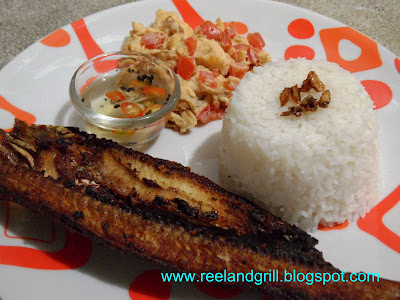 Flying fish or “exocoetidae” as known scientifically, may not be a major fish in both the Philippine and Sri Lankan markets however, it is extremely popular, well eaten and commercially fished in many Asian and Pacific Islands countries such as Japan, Taiwan, Vietnam, Indonesia, India and Solomon Islands, etc. and in the Caribbean in Trinidad and Tobago and most especially in Barbados where it is most significant and in fact regarded a national icon and an important part of its main national dish. This is enough reason for me to consider flying fish as a viable gourmet food within the context of Philippine cuisine.

As a start up, I decided to make the several pieces of medium-sized flying fish we purchased from a local catch into the popular Filipino breakfast viand called “daing” that is made from butterflied fish marinated in vinegar and garlic. I of course refer to the wet type as in “daing na bangus” and not the salted dried fish kind which, interestingly, was also referred to as “daing” (and I also like :)).

The flying fish is quite cheap so you can buy several kilos if you like. However, let me prepare the dish using just about a kilo of the unique fish, about 7 pieces and among the biggest from the small pile of “bolador” that’s available in the store. 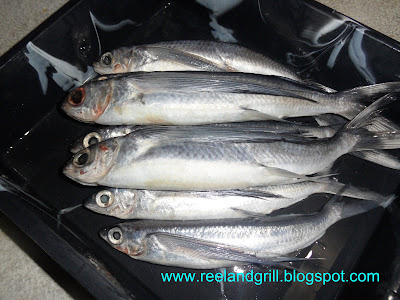 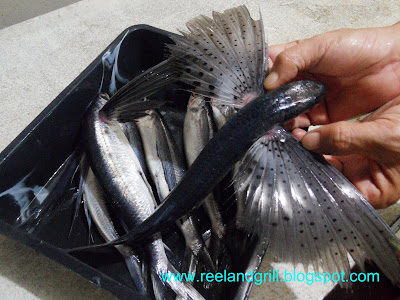 The first step is to prepare the flying fish. Scale the fish (yes, some sections of “bolador” especially the tail area have scales) and remove all the fins.

Split it along the backbone (from tail through the head) and spread into butterfly fillets keeping the belly section intact. Remove gills and internal organs and wash thoroughly to remove traces of blood and other impurities.

Transfer in a wide container and thoroughly drain removing as much water as possible. Pat-dry the fish with paper towels and set aside. 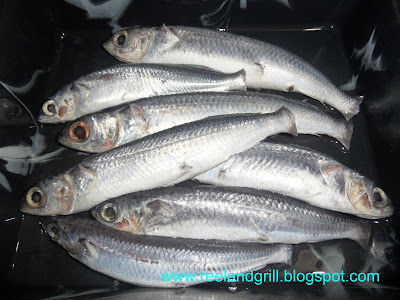 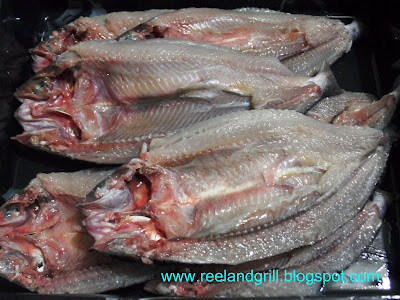 The next step is to prepare the marinade. The ingredients needed are as follows: 1½ cup natural vinegar, 1 head garlic, crushed and chopped, 1 tsp freshly ground or cracked black pepper, 1 tsp iodized salt and 1 tbsp white sugar. A dash of MSG is commonly use in most commercial preparation so you can include it if you like. Additionally, about a cup of vegetable oil is required during frying. 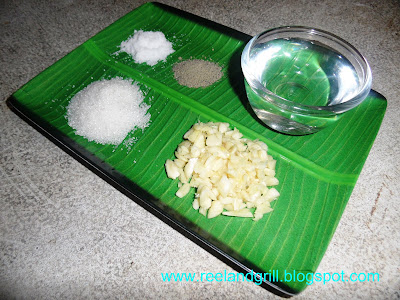 In a wide container preferable not aluminum, pour the vinegar. Add in all other ingredients and mix properly effectively crushing the garlic further with the back of a spoon to infuse its flavor into the marinade. 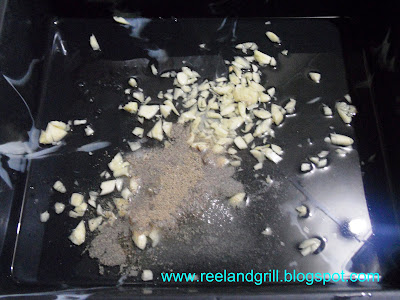 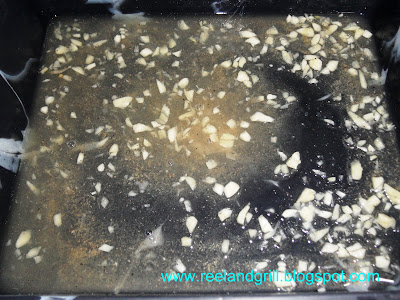 Add the fish one by one (two sides spread) basically soaking it into the marinade and then properly arranging in the container so that the fish is covered with the marinade for even infusion of flavors. Marinate for at least 1 day up to 3 days inside the fridge. Turn the fish over from time to time. 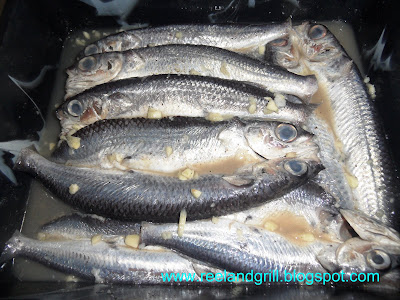 To cook, heat about 1 cup of vegetable oil in a wide non-stick skillet. Take out the marinated fish meat from the fridge and soak with the marinade once more. 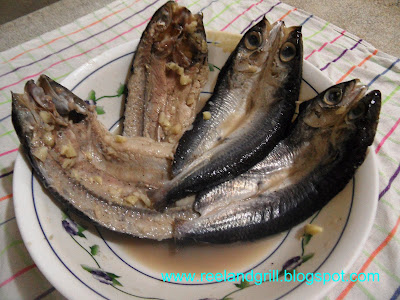 When the oil is already hot, cook the “daing” in batches. Fry each side until light brown and just cooked through or according to your preferred doneness. 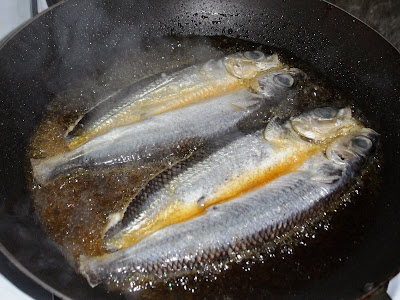 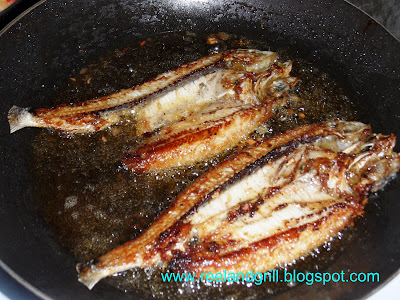 Continue frying in batches until everything is done. Properly drain the cooked “daing” in paper towels to remove excess oil then transfer in a large serving plate. Breakfast should be ready. 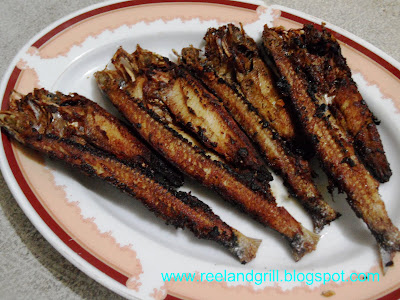 Serve with lots of steamed rice, some scrambled eggs with tomato and most importantly, for that true Filipino touch …… spiced vinegar dipping sauce with chopped garlic, chilies and freshly cracked black pepper on the side. 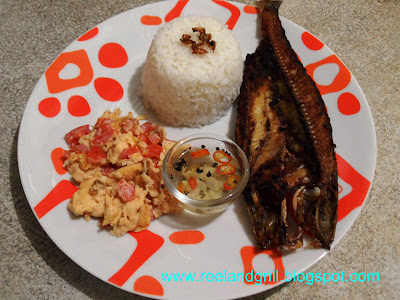 Other choices includes serving this alongside adobo garlic fried rice or dried fish fried rice, a sunny side up fried egg and some “calamansi” + soy sauce + chili dipping sauce.

Excuse me but the smell of “daing” is strongly pulling me towards the dining table …… and like “tapang baboy ramo”, this is one breakfast I can’t resist. Seriously! Enjoy! c“,) 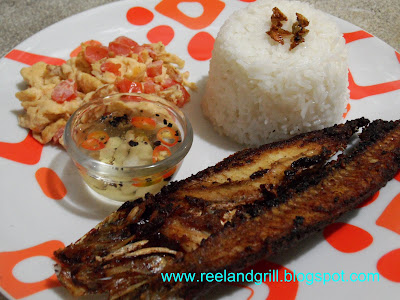 Posted by Cuisinegineer at 10:56 AM