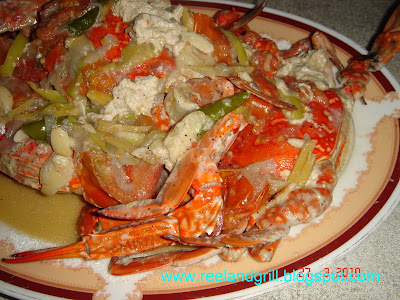 “Alimasag” or blue crab and sometimes referred to as sea crab, is one of the tastiest decapods crustaceans’ bounties of the sea. The widely eaten crab is native to the western edge of the Atlantic Ocean from Nova Scotia to Argentina and has been introduced to Japanese and European waters as well as other waters of the world through the ballast water (composed of sea water full of stones, sediment and thousands of living species) usually carried by ships in their tanks for stabilization, from the point of origin and released to the point of destination, effectively allowing the introduction of new species to foreign waters.

The easiest and most common way of cooking blue crabs is by simply steaming them until their color turns striking red like in my “Steamed Alimasag” post. The usual way of eating them is in the hard shell. While steaming is very popular, there are more elaborate ways of preparing the crabs into yummy dishes like in my “Alimasag con Sotanghon” post where it was cooked with tasty oyster sauce and glass noodles. Another popular Filipino way of cooking “alimasag”, specially the fat ones or those with eggs, is with coconut milk and some spices. 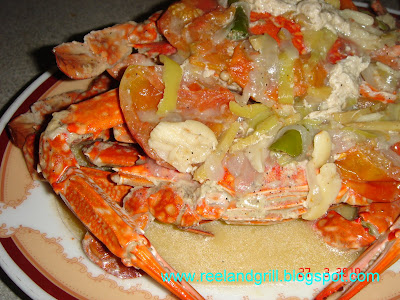 While eggs of blue crabs are not usually consumed in many Western nations, in Asian cultures, including the Philippines, the eggs and the ovaries of female crabs are eaten alongside the meat. There, it is considered that the best time to catch or purchase crabs is at a time when they are most fertile or when they produce the eggs and at the same time turn the ovaries into a more edible and enlarged orange variety.

The eggs and ovaries, collectively forming what is referred to as the crab fat are called “aligi” in the Philippines and are highly sought-after food item, making the female crab, identified with the rounded apron on the underside, more preferred and expensive than the males, identified with long narrow abdomen. For blue crabs though, males often contain fat too and are also delicious like the females. 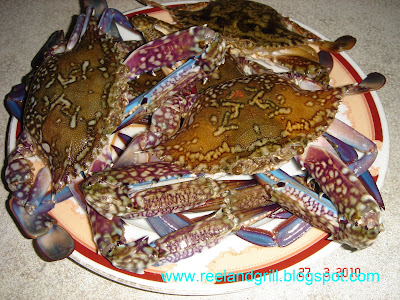 Coconut milk is a sweet, creamy, milky white cooking base extracted from the grated meat of a mature coconut. The color and rich taste of the milk can be attributed to the high oil content and sugars of the coconut. In the Philippines coconut milk is called “gata” thus dishes cooked with it is called “ginataan”. Coconut milk is very popular in Southeast and South Asia and called “ga-ti” in Thailand, “santan” in Malaysia, Indonesia and Brunei and “pol kiri” in Sri Lanka.

There are two grades of coconut milk: thick and thin. Thick coconut milk called “kakang gata” in the Philippines is the first extraction milk collected by directly squeezing grated coconut meat through cheesecloth or in between palms. The squeezed coconut meat is then soaked in warm water and squeezed a second or third time to get the thin coconut milk. Thick coconut milk sometimes referred to as coconut cream, is used mainly to make desserts and rich, dry sauces. Thin milk is used for soups and general cooking. 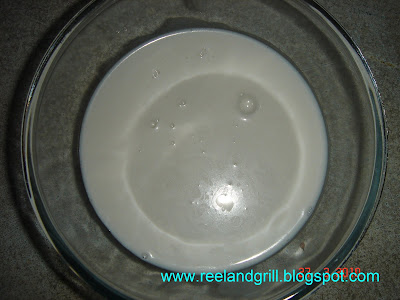 To prepare the “ginataang alimasag”, the major ingredients needed are about a kilo (1,000 grams) of fresh blue crabs, about 4 pieces, thoroughly washed and drained and about 2 cups of good grade coconut milk, both of which are shown above. 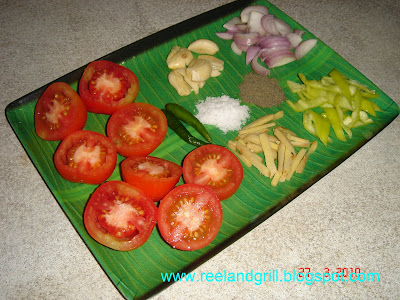 Arrange the garlic, ginger, onion, tomatoes and chili peppers on the bottom of a thick casserole. Arrange the crabs on top of the vegetables and spices. Sprinkle salt and ground pepper on top of the crabs and pour the coconut milk. Add in the finger chilies and cook over medium heat. 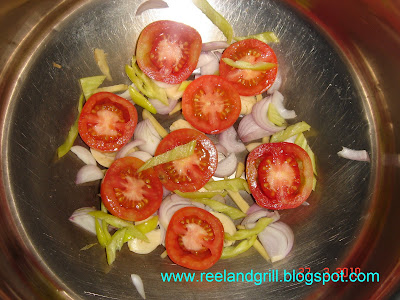 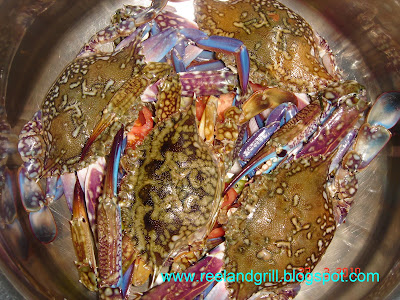 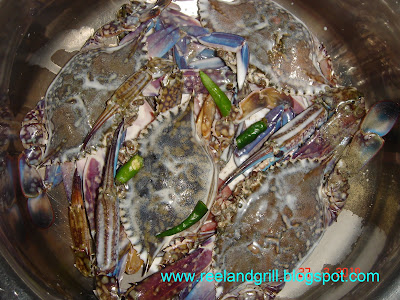 When the liquid is boiling, lower the heat and continue simmering until the crab is cooked through and has transformed its color into deep red hue. Taste the rich sauce and adjust the seasonings. When the coconut milk sauce is reduced to a creamy consistency and some nice curdling has occurred, it is done. For a creamier and richer dish, just add about ½ cup thick coconut milk or coconut cream at this point and further simmer for 3 to 5 minutes. I usually do this like in my “Ginataang Dalag at Hipon” post but I ran out of coconut cream this time. :-) 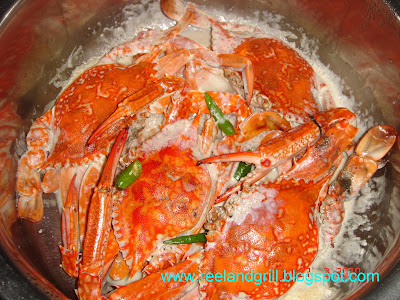 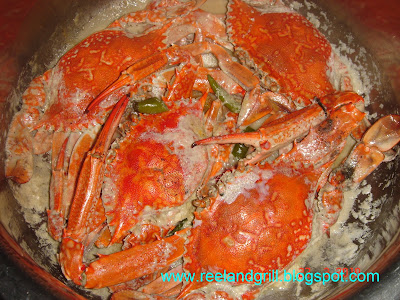 Transfer the crabs into a large platter. Arrange the vegetables on top and pour the creamy sauce with all the bits of that tasty curd. 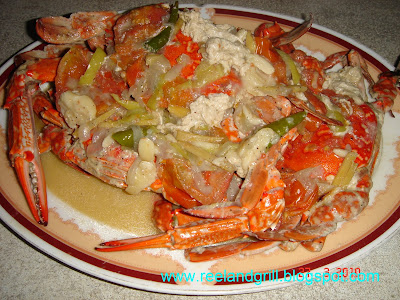 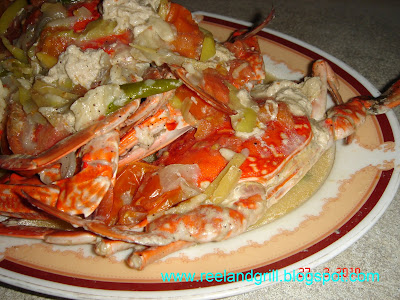