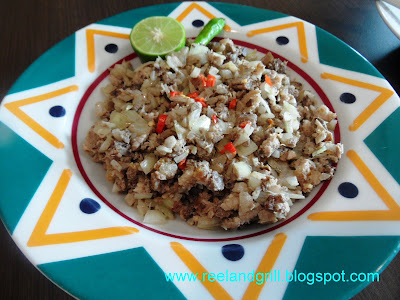 This month’s Kulinarya Challenge hosted by Frances of Iskandals and Jenn of Storm in my Kitchen is about one of my favorite Kapampangan dishes which, when the family moved to Tarlac City, I learned to eat, love and pray to cook, exactly in that order, is the versatile “sisig”. If you want me to salivate further by the mere mention of the word “sisig” kindly add the word Pampanga at the end to make it not just tasty but deliciously authentic, like the one I already posted before, and it will do the trick. :-)

I have no doubt that one of the culinary pride of the Kapampangan legion of Pampanga, part of Bataan and some part of Tarlac, is the amazing “sisig” – an ingenious and relatively low-cost (but hardly low-fat, lol) tasty food creation made of “inihaw” or grilled pork jowl and liver, fresh onion, calamansi extract and bird’s eye chili mixed altogether on the chopping board while …… hear this out …… while the cook’s knife (usually the wide cleaver-like type) is in “continuous up and down” motion.

Please be careful interpreting much more replicating the last phrase above. Although “sisig” was said to have been invented by accident, we do not want a kitchen accident occurring while preparing the dish. :-) The phrase simply means continuously chopping all the ingredients together (as oppose to individual dicing or mincing), until everything is properly mixed to desired sizes and consistency slightly bonded together by the paste-like substance that will eventually developed from the repeated chopping where minced bits of meat, onion, mashed liver, meat juice and calamansi delicately combine.

This may not be true or acceptable to everyone, but I personally believe that this process, which I observed, sneak peeked and spied on in restaurants, “turo-turo”, canteen, cafeteria, friends’ houses and most especially in roadside eateries (the same place where the dish was said to have originated), is a commonality among the tastiest Kapampangan “sisig” that I have eaten and is for me an important part of the “sisig” preparation technique where all flavors magically blend into pure sumptuousness. 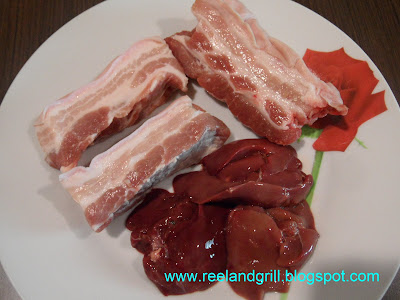 For such a great taste, it is quite surprising that the original “Sisig Pampanga” (at least as I have known it in Pampanga and Tarlac Provinces) composed of very few ingredients. The pork jowl (and ears) which is usually pre-boiled then grilled (the way I love it more) or deep fried (acceptable alternative), pork or chicken liver which is best grilled but also okay if only boiled or lightly fried, common onion or any sweet onion varieties, calamansi extract (or natural vinegar to some), table salt and the one thing that also contribute to making it tasty but most of you might want to skip, MSG. :)

For an authentic “Sisig Pampanga”, I like jowl, ears and all the meat you can carve from a pig’s head, seriously :-), but since I cannot find one in the supermarkets in our area, pork belly or “liempo” is my next best ingredient. I know this is such a relief to my wife and surely to most foreign readers of this blog. As shown above, the pork belly is about 450 grams and complemented by about 3 pcs chicken liver. Pork liver also works fine but I find the smooth texture and deeper taste of chicken liver better for the dish.

The meat should be boiled first until tender and to do that, we need some basic ingredients such as 1 tsp table salt, ½ pc bay leaf and ½ tsp whole peppercorn. 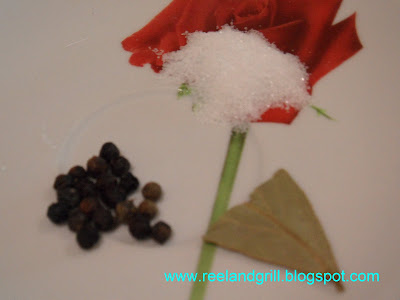 In a small stock pot combine the pork and the above 3 ingredients and cover with enough water, let it boil and continue simmering on low until the meat is just tender. Remove the meat form the pot to properly drain. 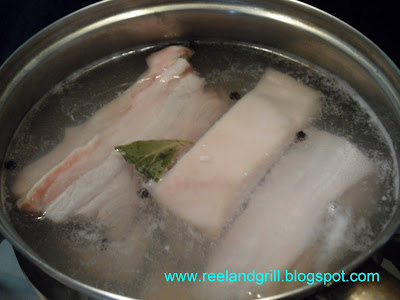 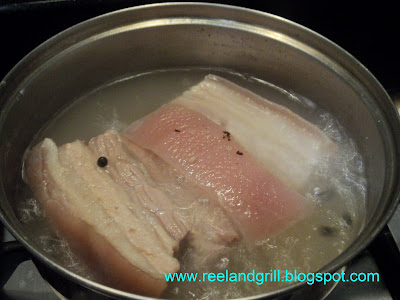 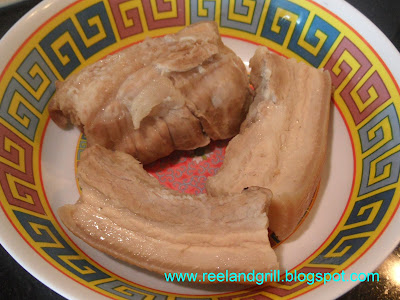 In the same pot with the broth, boil the chicken liver for several minutes until just cooked through and there’s no more traces of blood. Similarly, take out the liver from the pot and drain. You might want to reserve the broth for future use. 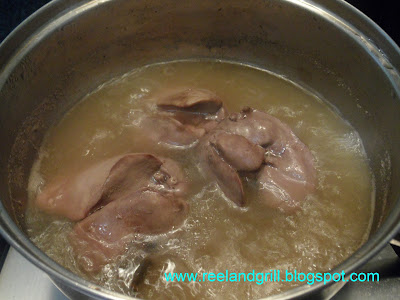 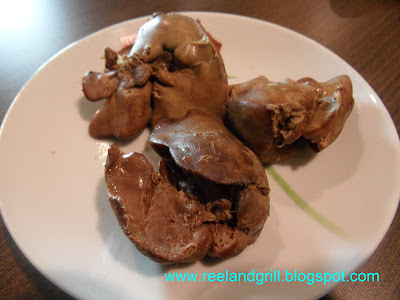 Prepare the other ingredients composed of onion (used the common type or other sweet varieties), some calamansi which I don’t have and sadly substituted with lime or “dayap” and some bird’s eye chilies or “siling labuyo”, if you like it spicy. 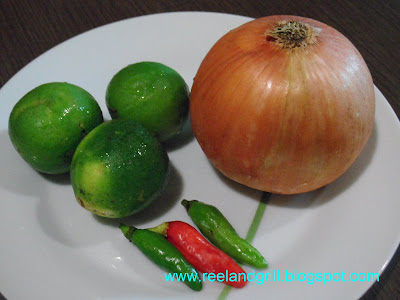 In a small frying pan, heat about ½ inch of vegetable oil and fry the pork meat. Be careful with the nasty oil spatter. You wouldn't like adding some polka dots design on your hands as I did :-(. Flip the meat over and cook the underside. Cook until golden brown and a little crisp on the outside. 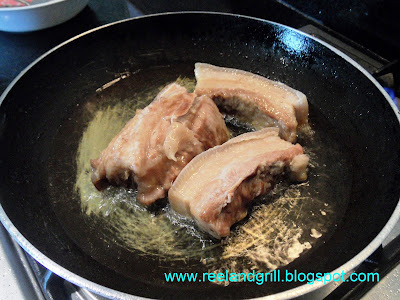 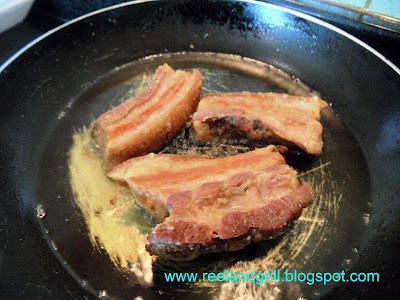 Remove most of the oil from the pan and lightly fry the chicken liver on the remaining film of oil until just sheared on two sides. 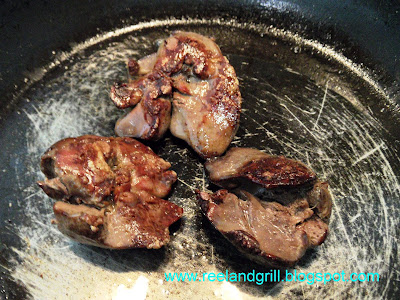 Keep the crispy fried pork belly and liver in a plate to drain excess oil. Keep afar for the meantime. At any rate, try hard to avoid reaching for the bottle of catsup as this is not about “lechon kawali” but “sisig” :-). I admit though, I almost did that. :) 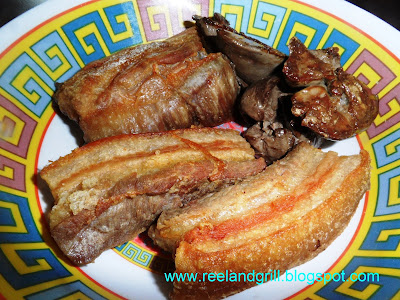 Using a large chopping board and your favorite chef’s knife, roughly chop the meat, liver and onion together. Add bird’s eye chili (if using) and continue chopping, bringing the ingredient to the center whenever needed. 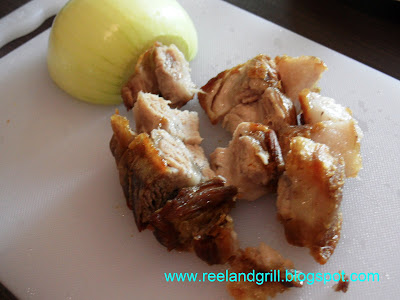 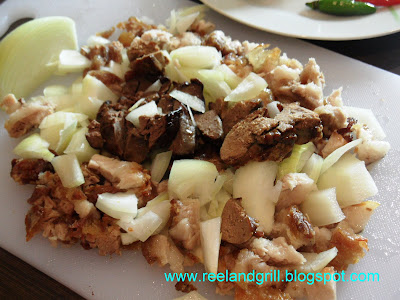 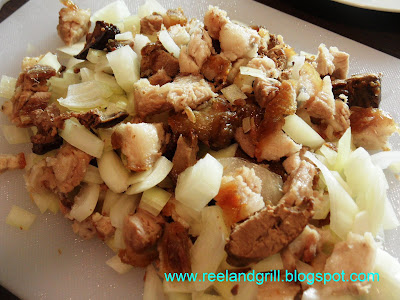 Continue until everything is chopped-up and mixed nicely and a slightly sticky juice starts to hold the bits of meat together. 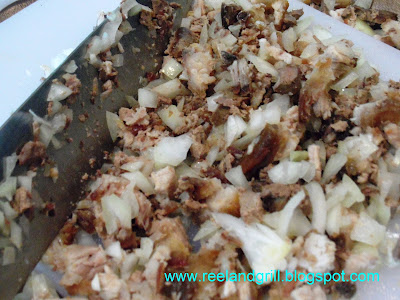 Transfer in a wide bowl (please use bigger mixing bowl instead), add the lime juice, season with salt and mix thoroughly. I like using a large serving spoon to press the mixture against the bowl essentially letting all the juices to come out and then blending it back into the meat mixture.

Do this several times for the taste to fully develop. Taste and adjust the seasoning and level of citrus juice according to your preference. 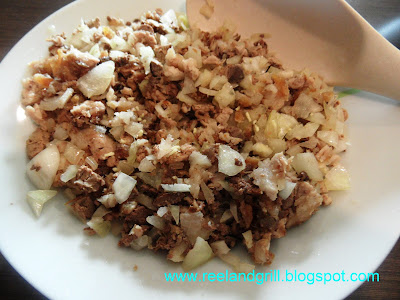 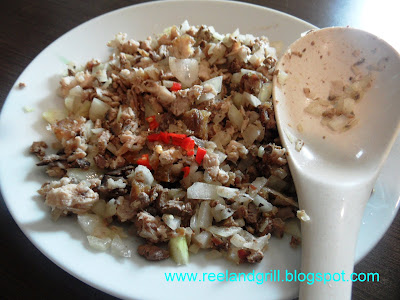 The amount of serving shown in the photo above is only from using half of the ingredients. I reserved the other half with the intension of preparing it for the next meal. Okay, at least that was my original plan.

Transfer the "sisig” in a serving plate and garnish with a slice of lime and some more chilies. Sometimes it only takes too little to actually look HOT. In food that is. :) 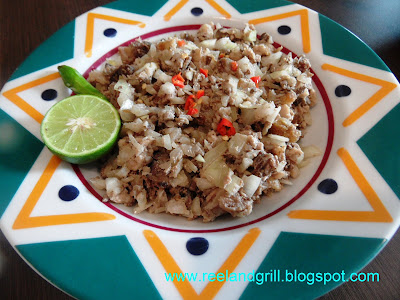 There it is ……… my take in this month’s Kulinarya Challenge – “Sisig Pampanga” prepared in a restricted environment (no grilling allowed, no pork jowl and calamansi available) lol.

This is great with rice and even greater with beer. Ooops, please strike-out that last word. This is a child-friendly blog. :-)

By the way, we ate this with steamed rice and some crispy “lechon kawali” and fried liver on the side. LOL! Enjoy! c“,) 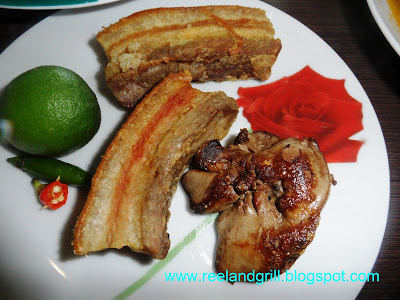