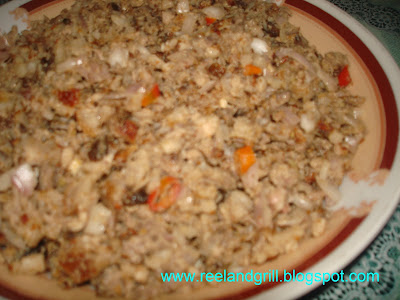 “Sisig” is a term in the “Capampangan”, the dialect of the people of Pampanga and partly of Tarlac Provinces of Central Luzon, Philippines which means "to snack on something sour". It usually refers to unripe of half-ripe fruits sometimes dipped in salt and/or vinegar. More widely known, it also refers to a method of preparing meat, especially pork and later on fish and other exotic meats, which is marinated in a souring agent such as calamodin (“calamansi”) or lemon juice or vinegar, then seasoned with salt, chili pepper and other spices.

Onion and chicken or pork liver are among the important ingredients of the tasty dish regarded as an ultimate Filipino “pulutan” or bites/morsel usually eaten while drinking alcoholic drinks or beverages. Whilst it started as a roadside eatery food, it is now widely eaten in every Filipino home as well as in many restaurants, big and small.

Mrs. Lucia Cunanan of Angeles City, Philippines has been credited with inventing the dish. The Philippine Department of Tourism has acknowledged that her "Aling Lucing's" Restaurant had established Angeles City as the "Sisig Capital of the Philippines". Mrs. Cunanan's trademark “sisig” was developed in mid 1974 when she served a concoction of boiled and chopped pig ears and cheeks seasoned with vinegar, “calamansi” juice, chopped onions and chicken liver and served in hot plates. 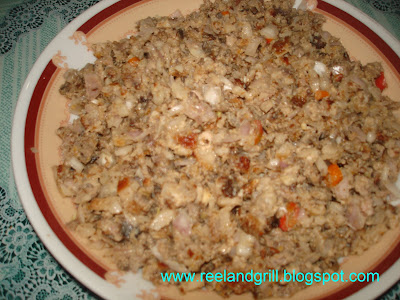 Today, “sisig” varieties include pork combination, “bangus” (milkfish), chicken, squid, tuna, “tahong” (green mussels), mixed seafood, ostrich, spicy python, frog and tofu, among others. For further variations, addition of any of the following is now often done: eggs, pork or ox brains, “chicharon” (pork cracklings) and even mayonnaise. Due to the popularity attained of the way it is served in a sizzling plate, the word “sisig” may also refer to sizzling “sisig”.

The typical preparation of “sisig” as we do it in Pampanga and Tarlac involves three phases: boiling, broiling/grilling or frying and chopping/mixing. Now others consider frying or sautéing as the final step. A pig's head or jowl is first boiled to tenderize it. Then the meat is cut up and grilled/broiled or as some likes to do, deep fried. Finally, it is finely chopped alongside with the onion and liver. As mentioned above, some prefers that after chopping the meat, it is fried or sautéed with onions and liver which I don’t usually do unless for leftover “sisig”.

For this version of “sisig” Pampanga, I will do the deep fried type. Whilst I prefer the grilled type and considered it as the authentic version, this method is very handy when living in the city and grilling in an open charcoal is hard to do. For the preparation we need about half a kilo of pork jowl, boiled until tender and then deep fried until crispy on the outside. 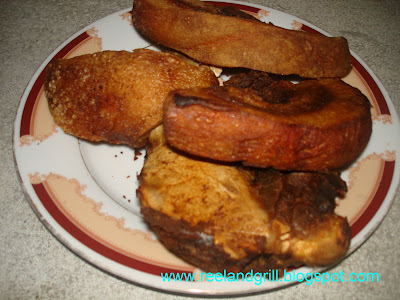 The other ingredients needed are 1 large onion, peeled and halve, “calamansi” or lemon juice, about 3 tbsp, 1 tsp salt or to taste and 2 pcs chili peppers. Most tasty “sisig” being served in eateries, bars and restaurants have MSG so adding some would not harm and will, in fact, enhance the taste even more. But of course, it is your discretion. My son will probably ask me to not even think about it. :-) 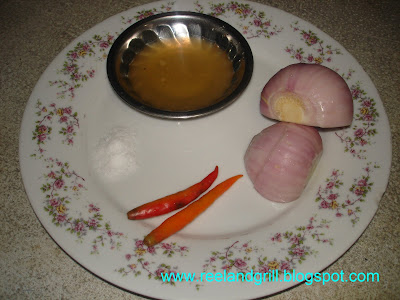 To complete the ingredients, we also need some chicken liver, about 3 pieces or more if you have, lightly boiled until there is no more trace of blood. 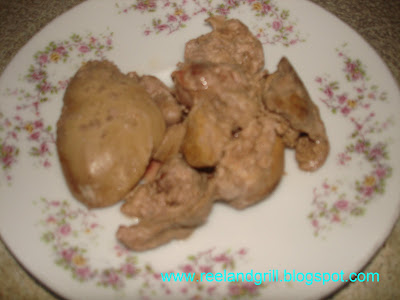 Since we have already boiled and fried the pork, the next step is simply chopping and mixing everything. But this process is quite important and usually providing the difference between an ordinary “sisig” and a distinctly tasty one.

In a wide chopping board, carefully chop the crispy pork meat to a rough texture first. Then roughly chop the onion as well. Mix the two ingredients and chop finely allowing the flavors to combine during the chopping process. 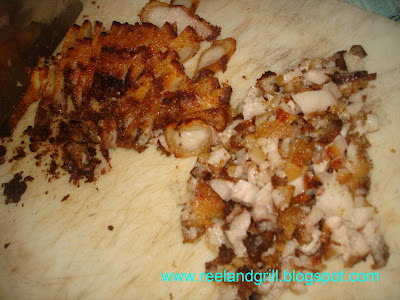 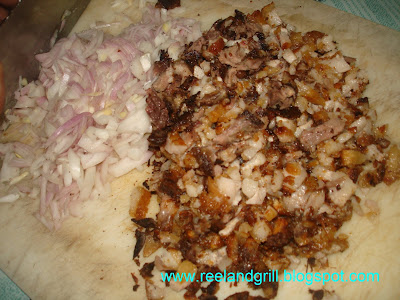 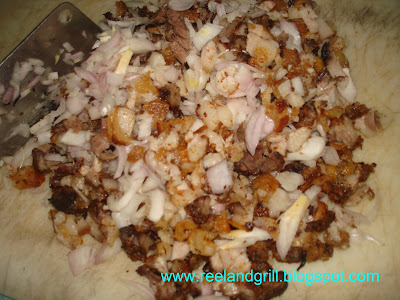 Add the chicken liver and continue chopping. The flavors of the 3 ingredients will further combine while chopping. 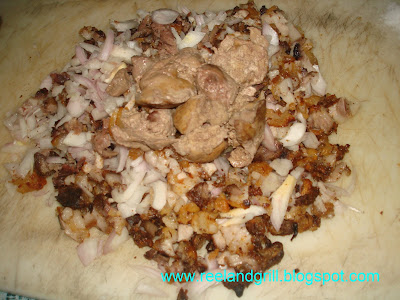 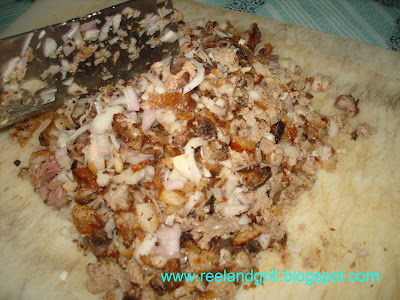 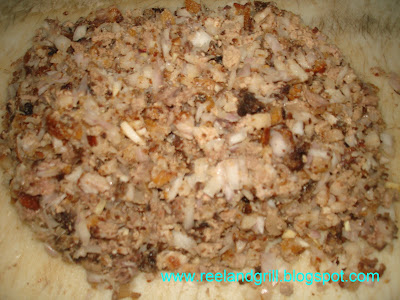 Transfer in a deep mixing bowl and add in all the other ingredients. Using a large serving spoon, mix everything. Apply a pressing action to somehow squeeze all the juices from the ingredients then stir it again to fully blend the flavors. This is very important. Do it several times until everything is fully combined and taste has developed. 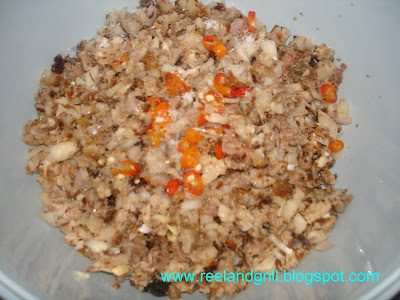 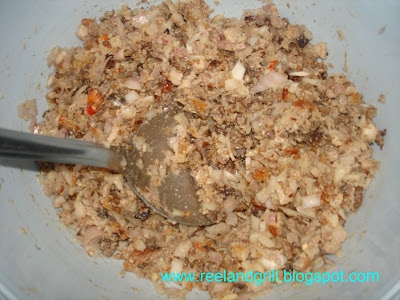 Transfer in serving plate or in a sizzling plate and serve immediately. Others will probably break a fresh egg on top when using a hot plate to heighten the taste. Serve it with some “calamansi” juice + soy sauce + lot of chili dipping sauce on the side. As viand of an adobo-garlic fried rice would be great. Enjoy! c“,) 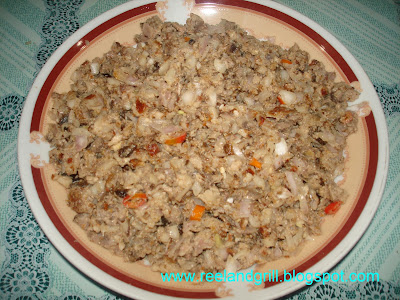 I ate this wonderful dish with steamed rice and it’s so good; but as I said, this goes very well too with your favorite drinks. Call your friends and start the party. :-) 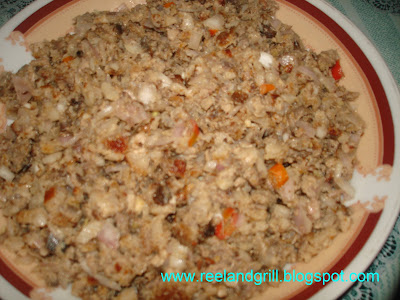