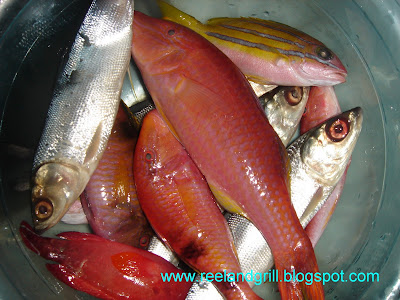 In the continuation of our family's Christmas Fishing Tourney, the 2nd and final event which is the saltwater fishing at Bane, Pangasinan was held on the 3rd January 2010. The young family members who ruled the 1st event of Fun Family Fishing at The Lakeshore were not able to join the tournament as the sea is quite dangerous for them. Some adult members were likewise not available that day due to pressing commitments and holiday hang-ups. While we were only four committed anglers available, the show went on. The game plan is to try trolling and if not so productive, shift to reliable bottom fishing.

Another important part of the game plan is to have a wonderful seafood lunch as we usually do, courtesy of our contact who owns most of the boats from his or other fishermen’s catch of the day.

We left Tarlac City at 4:00 am on that relatively calm Sunday. We made a short stop-over at Alaminos, Pangasinan to buy some provisions and live shrimps for bait. We continued the journey and arrived at the secluded fishing village by around 7:00 am. We were greeted by our contact and boat-owner who was extremely happy to see us but quite unexciting about the unfavorable sea condition. He informed us that the water is full of grass and sea weeds making trolling difficult and reports of very low catch among local fishermen have been prevailing for several days. We somehow confirmed the bad news by seeing lots of boats docked on the shore indicating nobody seems interested to fish. 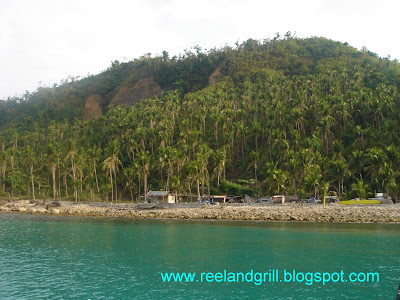 But since we traveled more than 200 km for the event, we can not be prevented from trying our luck. This is a tournament with 2 exciting prizes at stake and going home without casting and wetting lines is not an option. Among the prizes for the tourney is a nice Okuma “Cedros” High Speed Spinning Reel CJ-55S donated by Maya and Eboy intended for the first prize and a reliable Abu Garcia “Soron” STX Spinning Reel donated by Aimee and Andrew slated for the second prize. 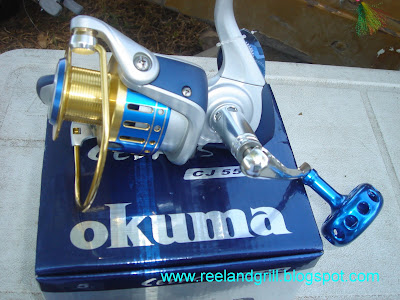 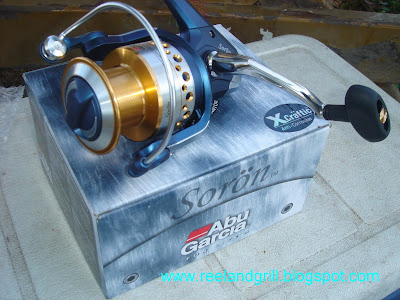 So we asked the boatmen to prepare the boats while we eagerly set up our gears. We prepared our trolling gears and rigs likewise some terminal tackles for bottom fishing just in case trolling will not work. I have been dreaming of a big catch from trolling but since the condition is not perfect, I decided to lower the level of our anticipation early on but somehow still hopeful of a worthwhile fishing. As we leave our camp/contact's house towards the shore, our contact asked if he will prepare a late lunch for us which we immediately replied with a resounding YES, eating seafood being part of our adventure for the day. 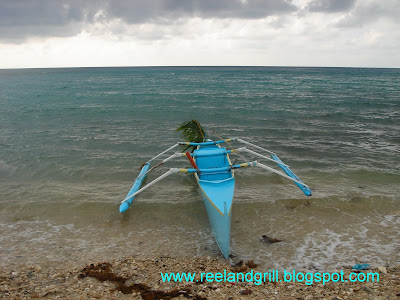 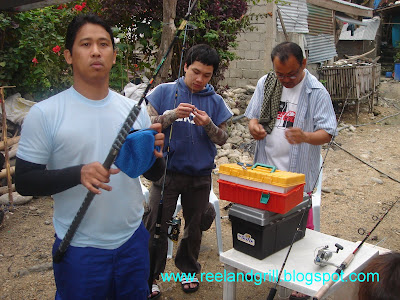 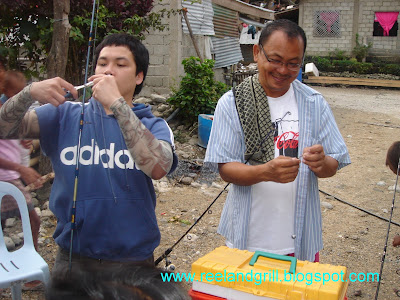 When everything was ready, we boarded our boats and off we head out for the sea. It was the tandem of my brother Bogs and brother-in-law Bojo who first left the shore at about 7:30 am. Me and my cousin Allen followed soon after but had to go back ashore and change boat as the engine malfunctioned. By around 8:30 we were also in heat trolling the waters of Bane reaching as far as Bolinao, Pangasinan. 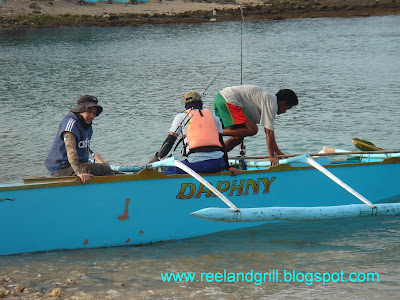 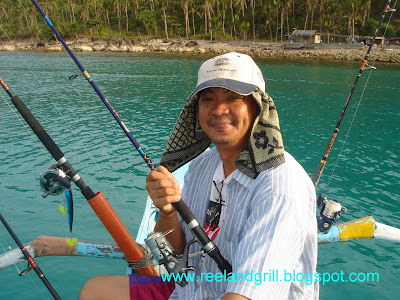 As cautioned by the boatmen, presence of a lot of sea weeds was encountered. Trolling was quite difficult as we spent most of the time removing the weeds that entangles into our rigs. The same happened to the other group. But we did not give up, we continued trolling hoping for a strike of either “tanigue” (wahoo), “talakitok” (giant trevally), king fish, barracuda or “dorado” (dolphin fish) which our group caught before and the local fishermen are usually harvesting. I had a massive strike which pulled the drag of the reel resting of the rod holder, but even before I was able to hold the rod, the line snapped taking the whole rig away. We don’t know and will never know what sort of fish caused it. That was the only strike we had.

After several hours, we tried our luck in bottom fishing. Live shrimps were baited and dropped some 50 to 80 meters below the surface to entice reef and bottom dwelling fishes. But even this proved to be unproductive. We managed to only have several weak bites landing relatively small reef fishes. 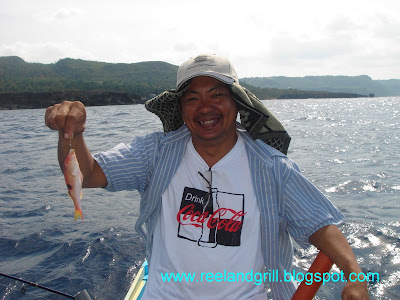 When the bottom fishing wasn’t really working, we once again tried trolling but as before, we only caught weeds. Lots of weeds. We tried bottom fishing once more but still, only small reef fishes were biting. The biggest is only a grouper of about 250 grams. The wave got bigger and the under water current became stronger making the fishing even more difficult. As the day closes to its end, we decided to head back to the shore, almost empty-handed. 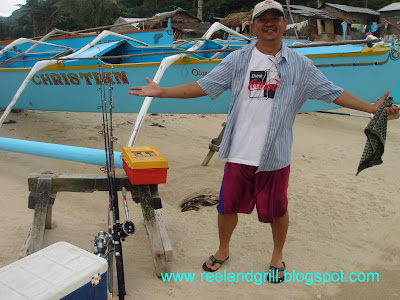 Our catch are really colorful and utterly beautiful but then minute, just slightly bigger than the bait. :-) They are only juvenile fish good for pan frying. My planned post for wahoo sashimi, “kinilaw na talakitok”, “sinigang na ulo ng dorado”, grilled fish steak, fish fillet appetizer and golden fish & chips will have to wait for some time. :-) 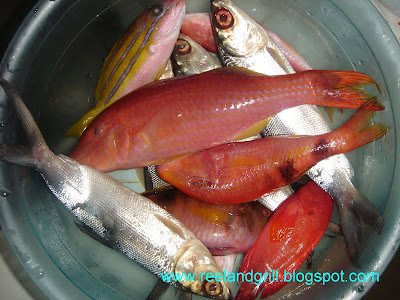 While we were waiting for the other group to arrive, I just satisfied myself with the magnificent sceneries that can be viewed from the tiny fishing village. I watched the clear blue sea which has been the source of the villagers’ main livelihood and everyday meal. It may had not provided us with an abundant catch but has been and will continue to provide a sustainable good harvests to the many families of the community in order to live and support their needs. And as I gaze at the horizon, I can see hope…….that someday I will be able to land the big fish of this sea. 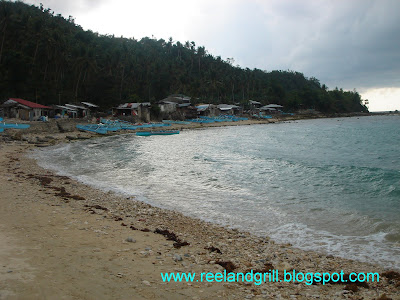 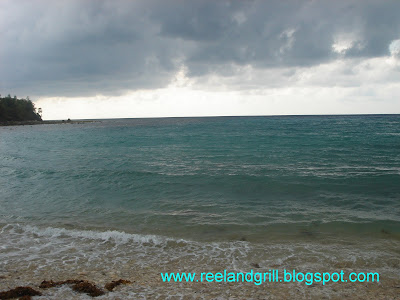 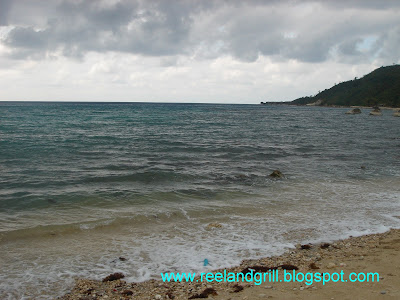 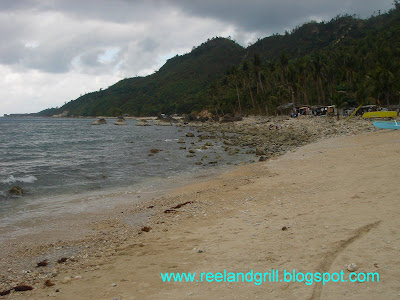 The other group was even more empty-handed than us. They suffered the same problems we experienced. Even my brother Bogs, the organizer, who is the most hard core angler among us, did not fare well. But all of us are happy. We were able to undertake the passion we all love. It may take another year for us to be able to join together again and thus the memory of the day along with the freshwater fishing earlier held is quite significant for us.

Before leaving the place, we had our late lunch as prepared by our contact. Contrary to the seafood dishes we are expecting, we were served with fried “longanisa” (Filipino sausage) and steamed rice. This only confirmed that the sea is not really that generous that day. We brought our packet of grilled pork chop out to add to the “longanisa” and rice and nonetheless had a wonderful lunch…….an all-meat meal by the sea. :)

Upon our returned home, we received the loudest teasing from other family members. :-) As we later shared moment with one another telling the experience we just had over a bottle of our favorite drinks, awarding of prizes was carried out. This was despite the joking protest of my brother-in-law and prize donor Eboy, that there should not be an awarding. The first prize went to my cousin Allen. The Okuma “Cedros” Reel was awarded by its donor, my sister Maya. 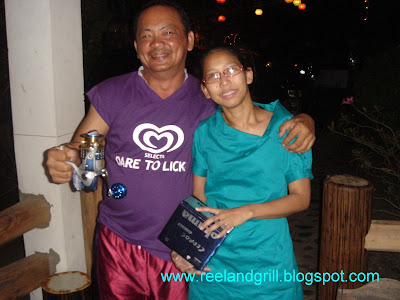 The second prize, out of mercy and probably respect, was accorded to Boyet. The Abu Garcia “Soros” Reel was awarded by my sister Ines who’s representing the donor, Aimee & Andrew who are currently in Dubai. 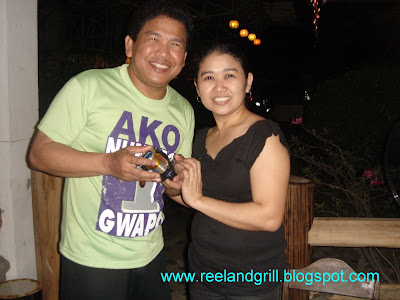 Though there was an obvious shortage of fish in both the freshwater and saltwater fishing events, there was an overflowing happiness and memorable moments shared by everyone. Truly there is more to fishing than just catching fish. As we, in the Tarlac Anglers, finally close the Christmas Fishing Tourney, look forward to a better tournament next year, hopefully with better attendance among members and better catch, for me to cook and blog. c“,)
Posted by Reel and Grill at 9:18 PM