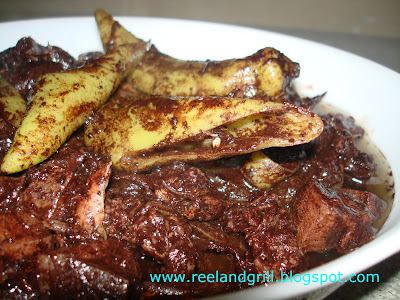 I have to remind you, this is not for the squeamish or faint-hearted. Particularly to non-Filipinos who might find this dish in some way disturbing or strange in their culture. I understand that most often, appreciation of entirely new food only happens after actually tasting it, like in the case of Japanese “Sashimi” and Korean “Kimchi”. Without really tasting this dish, we won't expect you to immediately like it.

“Dinuguan” or Pork Blood Stew is a Filipino savoury stew of blood and meat or offal or a combination thereof simmered in rich, spicy gravy of pig blood, vinegar, garlic and chili. While this dish is among the top favourite and very common anywhere in the Philippine archipelago, it is considered quite bizarre and startling in the Western Culture. Due to its dark and thick appearance, Westerners sometimes refers to it as “Chocolate Meat”.

Unusual as it may seem but actually “Dinuguan” has similarity with other dishes of other countries. Singapore for one has a dish called Pig's Organ soup, which differs only from the vegetables it contains and the way it is serve which is soupy rather than thick consistency. Bataks of Indonesia has a similar dish as well called “Sangsang” made from pork or dog meat and sometimes water buffalo meat. In the West, they have their European-style Black Sausage or British Black Pudding in a saucy stew form. In appearance and preparation it closely resembles that of the ancient Spartan dish known as Black Gruel whose primary ingredients were pork, vinegar and blood. 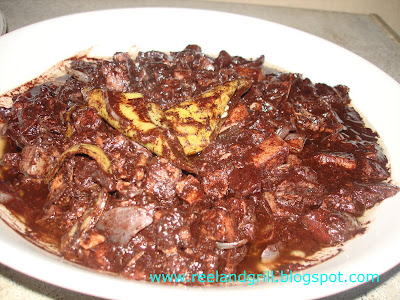 I believe most Filipinos have childhood memories of this extraordinary food. During weddings, fiestas, and other special occasions in the Southern Tagalog provinces of the Philippines, this is the first meat dish that is usually served to early visitors, usually on the night before the day of the main occasion. I like this dish so much that my Aunts from Quezon, Laguna and Batangas will deliberately reserve a large portion for me whenever I can’t arrive the night before of their occasion.
While it is regularly served with rice during meals it can also be eaten with Filipino sweet rice cake (“puto puti”) during snack (“merienda”) which makes it very popular in small restaurants, “carinderia”, school & office cafeterias and roadside eateries.
It is difficult to find pig’s offal in Sri Lanka so I will use pork head in preparing the dish. We shall need half a head of pork or about 3.5 kilograms like the one I used in cooking “Lechon Sa Hurno”. Thoroughly cleaned and meticulously cleaned. Yes, clean it twice. You know how the pig uses their snout, don’t you? :-) 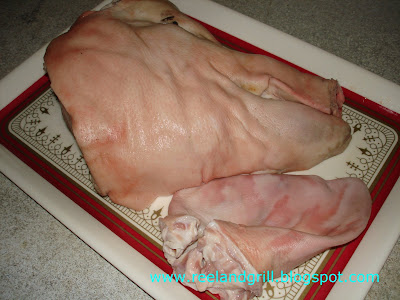 In boiling the meat to pork tender, we need 8 gloves garlic, smashed, 1 large onion, quartered, 1 large carrot, peeled and quartered, 2 stalks celery, chopped, 2 pcs bay leaves, 1 tbsp salt, 1 tbsp whole pepper, and enough water to cover. Yes your local “carinderia” might just be using salt and MSG. But you don’t like MSG and this is the secret to dishes like this. Don’t skimp on this, it will enhance the taste of the meat and the broth. Promise! 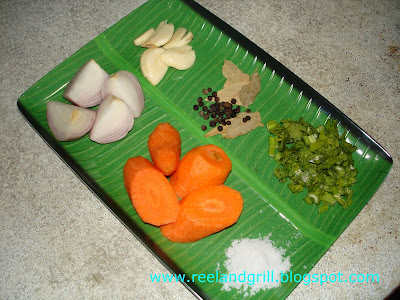 Place the pork head in a large, heavy casserole and cover with enough water. Let the water boil on high heat. Scoop out the scum as it rises during the initial boiling stage. This is important. Lower the heat to low and add all the above ingredients and continue simmering on low heat until the pork is tender. Flip the pork head half way to assure even cooking. This will take about 1 ½ hours to 2 hours. Add some water if necessary, 1 cup at a time, hot if possible. 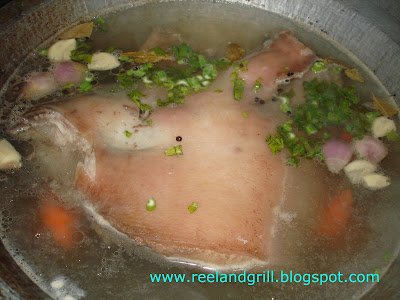 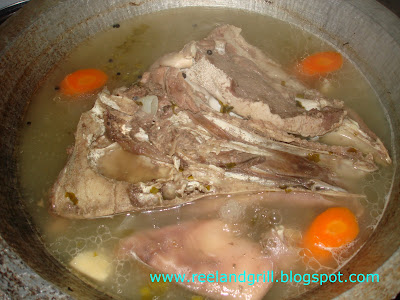 When the meat is fork tender remove from the broth, let it cool and drain. Filter the broth and set aside. We are using pork head so expect the broth to be oily. Scoop out the oil that floats on the surface and set aside. You can use it in sautéing later. Dice the cooled meat to small pieces and set aside. 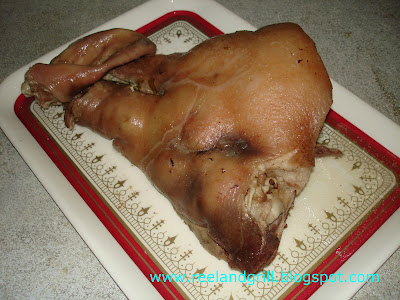 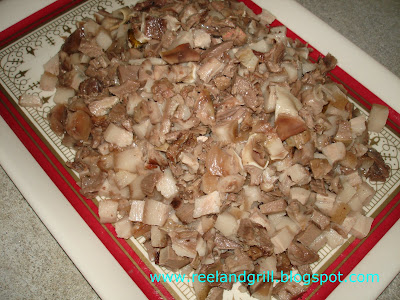 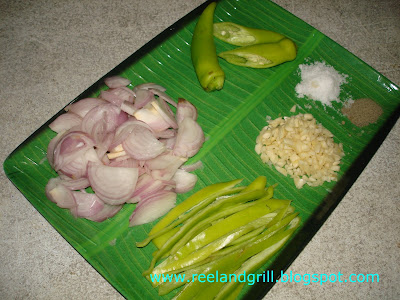 In a large thick pan heat about 2 tbsp of oil collected from the broth and sauté garlic, onion and julienned chili pepper. Add the diced meat and continue sautéing. Add salt and ground pepper and lightly stir. You can now smell the goodness of pork at this point. Before adding the liquid ingredients, you might want to lessen the amount of oil in the pan or take it out completely. I forgot to do this and my kids aren’t happy. :-) 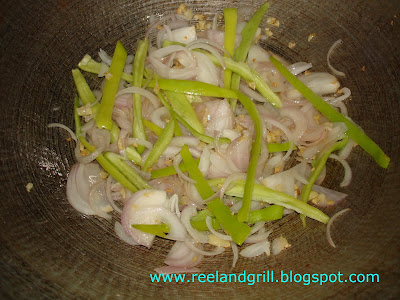 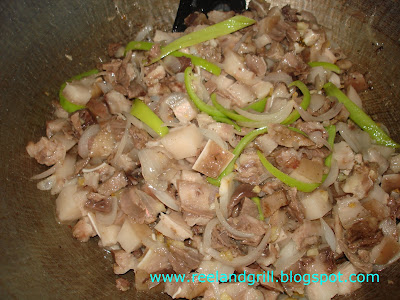 Slightly lower the heat, add the vinegar and let it boil uncovered without stirring. When it boils, add in about 4 cups of the broth (just enough to over) and continues simmering on low heat. Taste and adjust the seasoning accordingly. It should be slightly salty to accommodate the addition of blood later. If your blood has salt in it, you should consider that. When you are satisfied with the taste, combine your mashed blood and continue stirring. Add the whole chili pepper and cover, stirring from time to time until everything is fully cooked. If the sauce is too thick for you, adjust it by adding a small amount of broth. 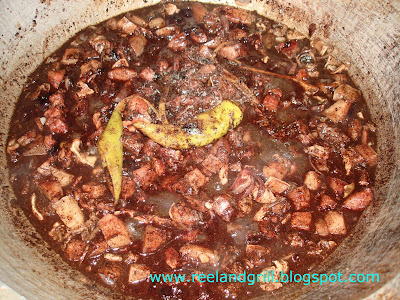 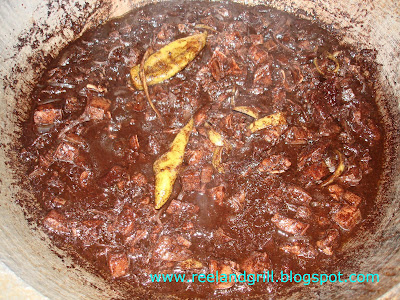 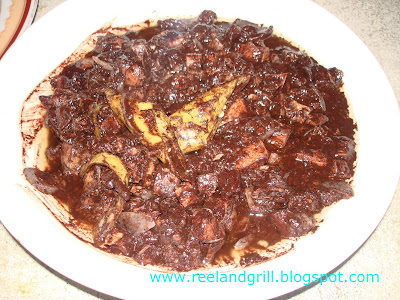 There it is. Your “Dinuguan” is ready. Enjoy. c“,) We have steamed rice but not “puto”. Pity me. Next time I will cook it using beef intestines and tripe in combination with some pork meat. I really miss the offal in “Dinuguan”. C’mon, as I reminded you right from the start, this is not for the faint of heart. 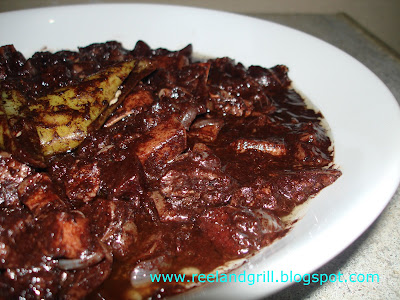