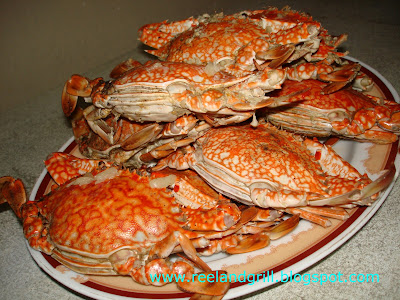 One advantage of living in a tropical island like the Philippines and Sri Lanka, as far as culinary adventure is concerned, is the abundance of seafood. The availability of many choices of fish, shrimps, lobsters, crab and other fresh sea harvests provide varieties of cookery one can experiment with. And of course the same goes to eating. Engaging in a seafood outing is something a foreign visitor should not miss when in countries like the two. It is a fabulous deal which can satisfy even the most discriminating palate and will provide an eating experience one will always remember.

“Alimasag” or sea crab is one of the much-sought-after harvests from the sea. This decapods crustacean is relatively easy to prepare and yet provides a very tasty meal that can impress visitors even for beginners in cooking. The secret is in the crab itself. Just like “Alimango” (mud crab), the meat of “Alimasag” is already delicious in itself. It does not even require a salt to bring out the taste. 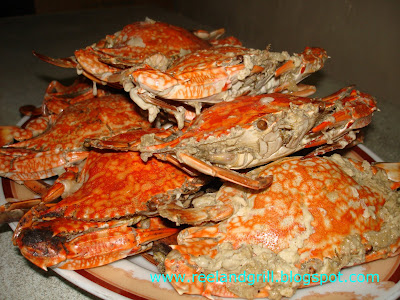 Just like typical Filipinos, me and my friends like “Alimasag” a lot. Whenever we go to a fresh market, it is on the top list of things to buy. We are lucky that here in Sri Lanka, it is quite cheap, allowing us to enjoy it more often. While we have prepared “Alimasag” in many different ways, the simplest, easiest and most inexpensive steamed method is still the most requested way of doing it. It’s probably because people want to retain the untainted taste and flavour of its meat, which is succulent and sumptuous right from its original package.
For a hungry group of 6, we decided to purchase about a dozen medium sized “Alimasag” weighing a little less than 3 kilograms. It should be thoroughly cleaned and drained. 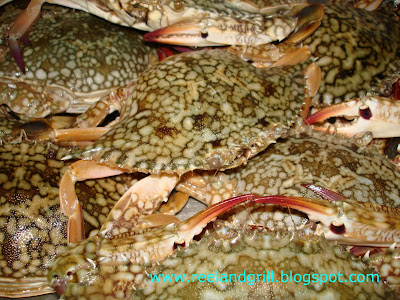 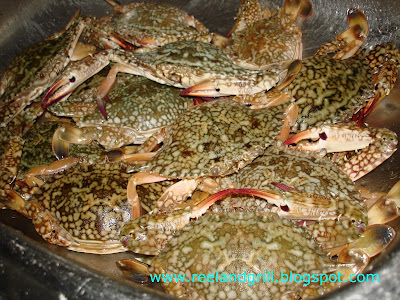 The few select ingredients which will further enhance the already excellent taste of the crab are about 2 tbsp garlic, crushed, 1/2 tsp ground pepper (optional), ½ cup sprite or seven up and about 3 tbsp vinegar. For the dipping sauce we will need some calamansi or lemon juice and 2 tbsp butter. If you are contemplating on other dipping sauce, you are at liberty to do so.
Arrange half of the crabs in a large pot. Sprinkle half of the crushed garlic and ground pepper on top. Mix sprite and vinegar and pour half over the crabs. Add the rest of the crabs and the remaining garlic, ground pepper and sprite-vinegar mixture. 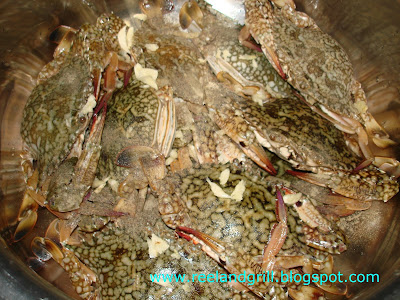 Let the liquid boil and continue steaming tightly covered on medium-low heat until crabs turn bright orange, about 20 or 30 minutes. 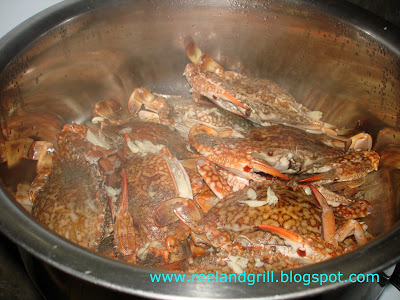 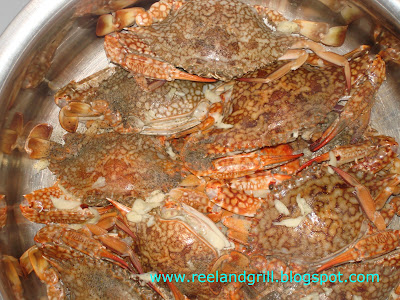 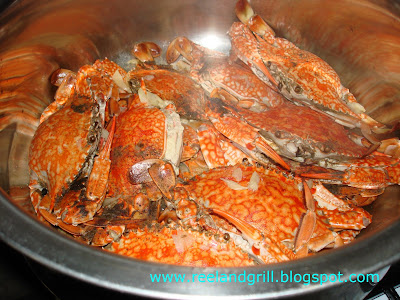 Crabs like shrimps pack a lot of water in their bodies which will come out during the steaming process. This is the reason why for me, the small amount of liquid ingredients is enough to fully cook the crab and at the same time avoid getting a large amount of residual liquid which could take much of the flavour. 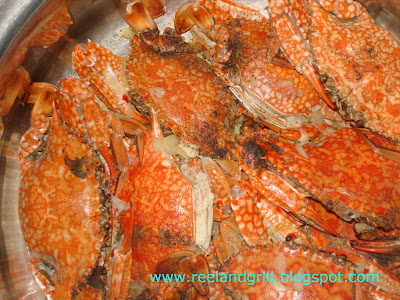 When it’s done (just a small amount of liquid remains), transfer if to a large plate and serve. Steamed “Alimasag” goes very well with steamed rice or if you like, eat it with your favourite drinks. 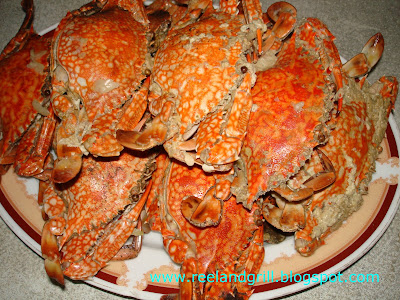 Melt the butter and mix the calamansi (or lemon) juice for a wonderful dipping sauce. If you prefer, calamansi + soy sauce + chilli, then go for it. Just calamansi juice + sea salt is also good. Some of our members like to dip it with seasoned vinegar and crushed garlic. Whatever it is, just enjoy. :-)
Posted by Reel and Grill at 10:55 PM