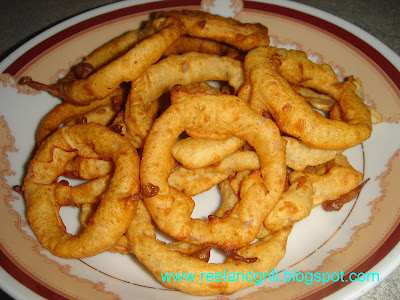 The other day, our group was having some grand time watching the FIFA World Cup games on TV while sipping our favorite drinks. As the fun, thrill, enjoyment and anticipation continue and so was the drinking. With the excitement soaring high but occasionally cut short by disappointing turnover, a mix feeling of joy, sadness and hope, unique to the sporting world, prevailed over our dormitory.

With such a highly charged atmosphere, expect drinking and bites or morsel eating to get extra exciting and pretty frequent as well. As a result, our store-bought cheese flavored chips and roasted peanuts could hardly cope up with the quick hands of the fast starving seven group members having some real good time watching the games.

To provide with a continuous supply of appetizer or bite or “pulutan”, as we call it in the Philippines, I decided to prepare some homemade onion rings. We usually cook French fries and “chicharon” or pork skin chitterlings during such times but since the World Cup is quite important and only happens every four years, bites to be served should be at least new or not commonly enjoyed and could be considered rather exceptional. 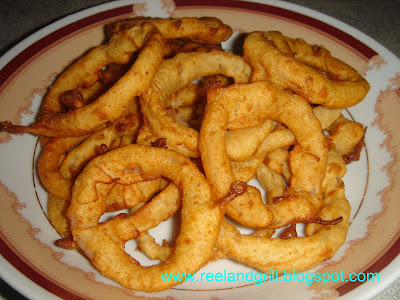 Onion rings are large onions cut to rings, coated with batter and deep fried until golden brown and crispy. They are perfect as appetizer, snack and bites eaten on their own or along with some other snack food and preferred drinks. In North America, it is a common accompaniment for hamburgers, hotdogs and other popular sandwiches as an alternative for the usual fried potatoes such as French fries or potato chips or potato wedges.

Onion is a term used to refer to many plants in the genus “Allium”. Although these plants are known by the common name “onion” but the term really refers to the "garden onion" or "bulb" onion. Onions are extensively used in almost all of the world's cuisines and playing a major role in numerous recipes and food preparations like in the Filipino dishes “kalderetang baka”, “kalderetang kambing” and “bistek or bistik” recipes, to name just a few.

Whilst the best varieties to use in preparing onion ring are the yellow or sweet onions, large red onion can also be used. For this dish, I will, in fact used the said red variety because that’s what I have in the pantry. :-) 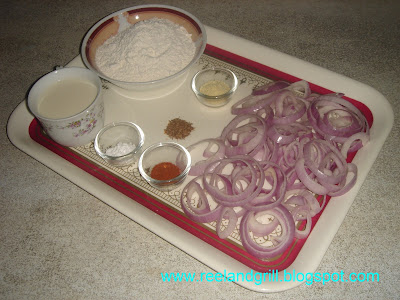 In addition, 1 to 2 cups vegetable oil for deep-frying is required and about ½ cup fresh milk to thin the batter on the latter part of the cooking process might also be needed.

In a wide mixing bowl, dump 1 cup of the all-purpose flour and combined with cream of tartar, seasoning, chili powder, cayenne pepper. Stir to mix evenly. Add 1 cup of fresh milk and then stir/beat the mixture until a thick batter is formed. 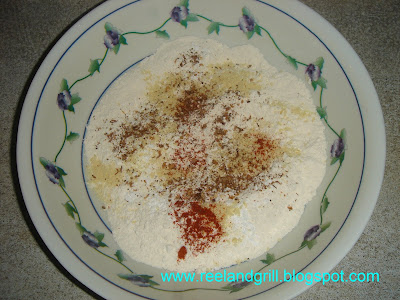 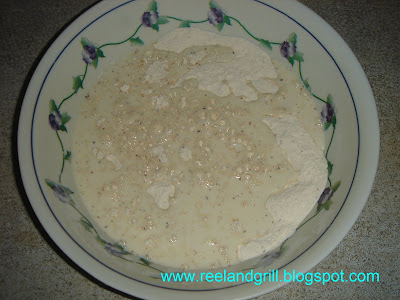 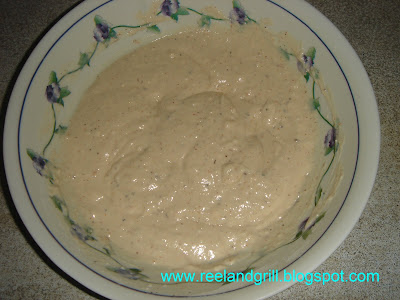 To prepare for the deep frying, arrange the onion, remaining flour and batter side by side as shown below. 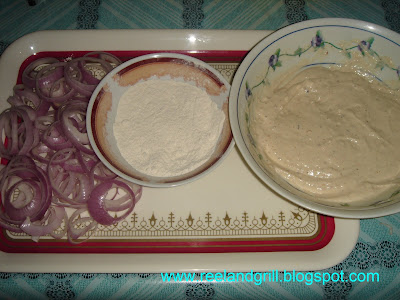 In a small, deep and heavy bottomed pan heat the vegetable oil over medium-high flame until hot but not smoking. When the oil is hot enough, dip the onion in flour to make the initial coating. Then dip it the second time on the batter to make the final coating. Then continue deep frying in batches until the onion rings are slightly browned and crisp. Using paper towels drain excess oil from the cooked onion ring. 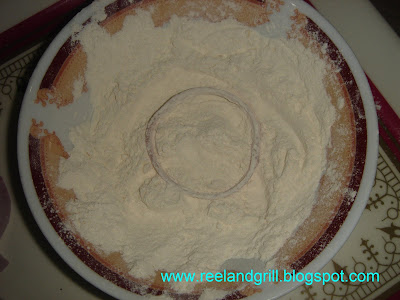 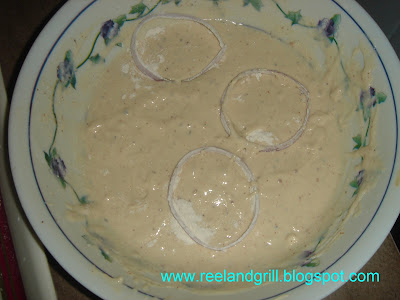 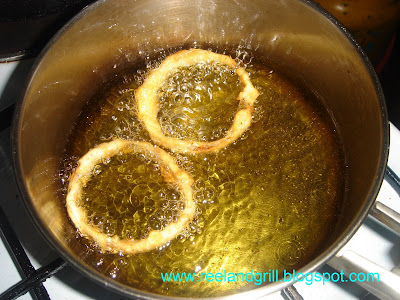 Continue cooking in batches until all ingredients are used up. If the batter is getting too thick at the latter stage, thin it out by adding a small amount of milk and beating until desired consistency is again attained. Transfer the cooked onion ring in a medium plate and serve immediately. The group has been waiting quite long. :-) 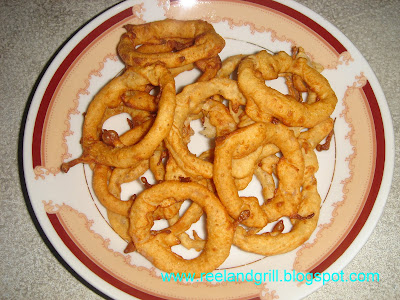 Having served to my friends, watching the World Cup and enjoying some drink, the onion ring never had the chance to turn cool. It was easily consumed the moment it was served on the table. Yummy! c“,) 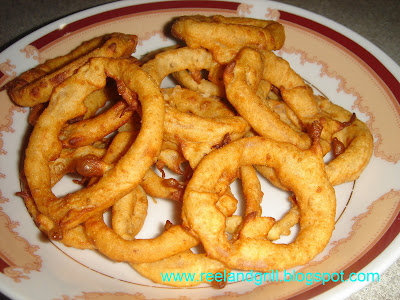