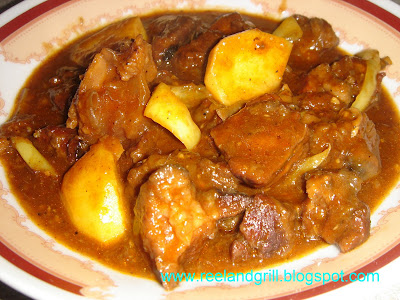 Like “caldereta” or “kaldereta”, “mechado” is a beef stew dish from the Philippines with obvious Spanish influences, from its name to the use of ingredients and to the slow stewing process. Although the current use of typical Filipino ingredients such as soy sauce and “calamansi” extracts in many of its variations is giving its distinct Filipino character, the key ingredients and texture of the dish remain a showcase of the rich Spanish cuisine’s characteristics.

The name “mechado” originates from the traditional use of Spanish culinary practice of threading strips of pork fatback through thick pieces of the lean beef to render them more tender and juicy. The strip of fatback which basically serves as a wick is called “mecha” in Spanish, hence the name “mechado” to the dish.

In its common form, the larded pieces of beef are then marinated in vinegar, soy sauce, “calamansi” extract, crushed garlic, black pepper and bay leaf, browned quickly on all sides in hot oil or lard and then slowly braised in its marinade with the addition of soup stock, onion slices and tomato sauce or fresh tomatoes until tender and the liquid is reduced to a thick flavorful gravy.

However, my own variation is more of the Spanish side; cooking it more like “beef caldereta” with no quick-frying of the meat and not involving the use of soy sauce and “calamansi” in the marinade. I also prefer beef cuts with some fat layers, ligaments and tendons if possible to avoid the use of pork fatback strips which my wife and kids do not particularly like in stew dishes. 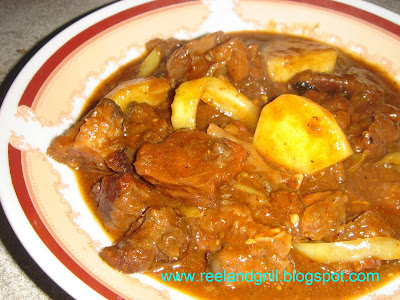 The dish, over many years, has evolved to encompass variations that use thinner slices beef or even bony cuts such as beef spare ribs or short ribs and as I have been doing, have dispensed with the larding process altogether. A newer variation of the dish can appear more like a typical beef stew and as I said above very similar to “beef caldereta”.

My signature process here is the heavy use of onions which over the slow and long process of stewing will dissolve into thick liquid and incorporate into the luscious sauce. That would make it distinctly tasty. 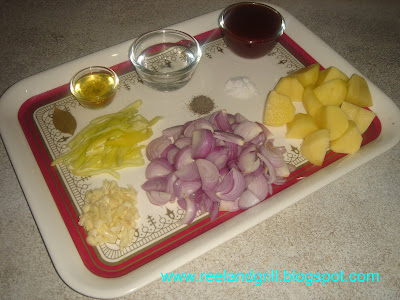 For the meat, we need about 1 kilogram (2.2 lbs) beef with fat layers and ligaments, cut into cubes, thoroughly washed and drained. If using a very lean cut of beef, add several strips if pork fatback. 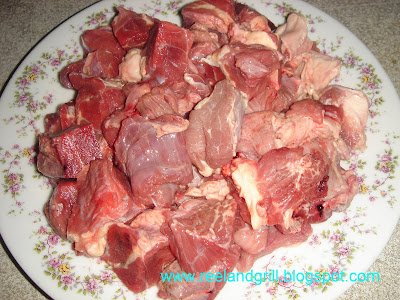 In a deep mixing bowl place the drained meat and add the tomato sauce, vinegar, bay leaf, iodized salt and ground pepper. Stir to evenly mix the meat with the marinade ingredients. Marinate for at least an hour. 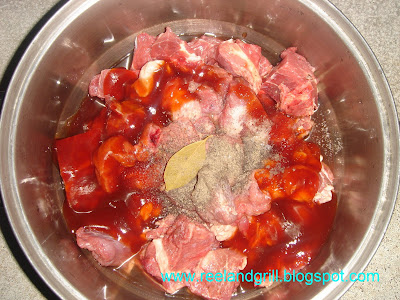 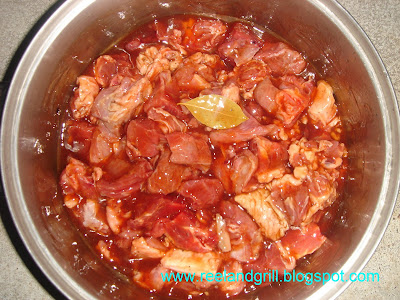 In a heavy pan or wok, heat the oil or margarine and fry the garlic followed by onion. Continue sautéing until onion is translucent. On top of the garlic and onion, carefully add the meat with all the marinade. Put the lid on and let the sauce to boil. As the meat is heated through, it will render some liquid making the addition of water not yet necessary. 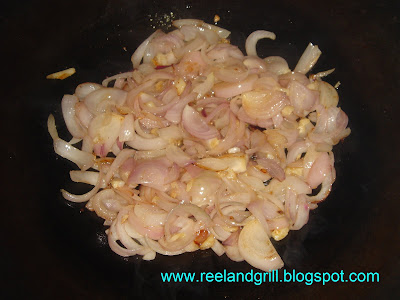 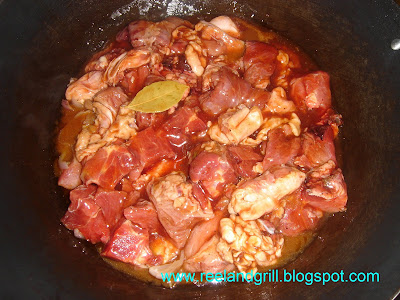 When the liquid is boiling, carefully stir to blend garlic and onion below with the meat on top. Lower the heat to the lowest possible setting but maintaining the liquid still gurgling. Put the lid back on and slowly simmer the meat. If the liquid is reduced, add the beef broth. Simmer until meat is fork tender. 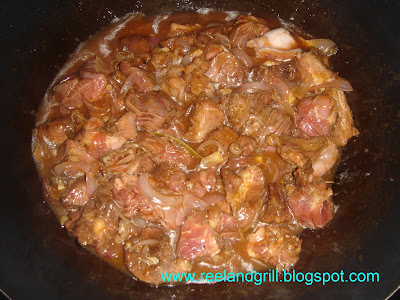 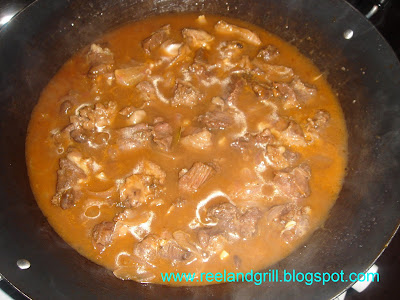 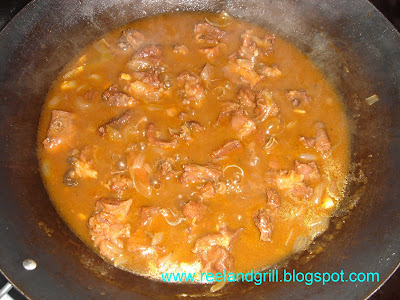 Check the doneness of the meat and the taste of the slowly thickening sauce. Adjust the level of salt and other seasonings. When the meat is slightly tender, add in potatoes and chili peppers or bell peppers and continue simmering. Cook until the potatoes are soft and meat is fork tender. 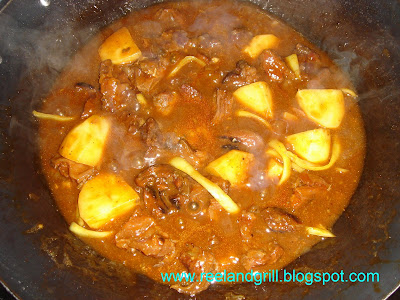 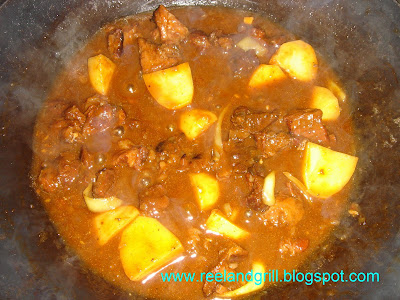 Finally, adjust the sauce consistency according to your preference. Some would like to add several tablespoons of fat or vegetable oil at this point but not me. You can do it though, at your own satisfaction and risk. Transfer into serving plates and serve with lots of steamed rice. Rich and delicious! :-) 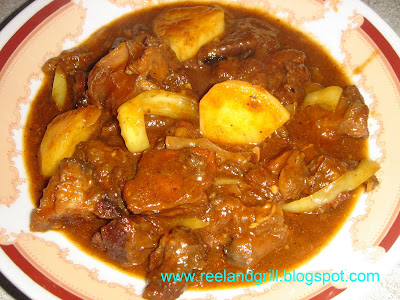 The soft meat, potatoes and the sauce all go very well with any crusty bread. You can eat it as a main meal for lunch and dinner or as a snack or “merienda” in between meals. Yum yum! Enjoy! c”,) 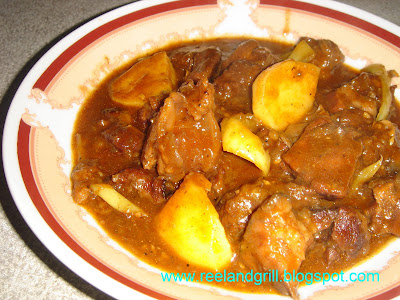