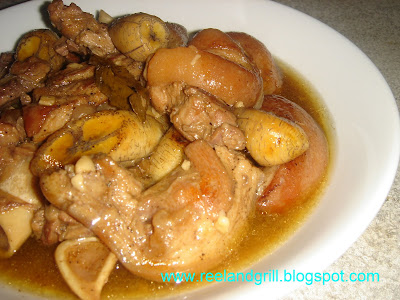 For the first time in 5 years, we chanced upon some cut up pork knuckle and hock in the supermarket here in the southwestern Sri Lanka. Spontaneously smile appeared on our faces …………as if we saw a long lost friend ……………an ally of sort not seen in a long while……and instantly flashes of good memories started to come in……… at an exponential speed ………just like a state-of-the-art computer generating a rather vague but nostalgic images from the not so distant past. Then I saw my mom, my sisters, my aunts, my cousins and many other family members and friends who for so many times I’ve seen joyfully devouring on this particular cut of pork called “pata” in the Philippines.

No, we did not buy a kilo. We bought 5 lbs or more than 2 kilograms. It’s much yes but who cares, we might not find them again next week. And we want to make the most out of this rare opportunity to enjoy the food we have been craving for some time. We thought of “paksiw”……… “kare-kare” ……… “pata tim” ………… and finally………”estopado”. After all, it’s been a while since we have that Filipino braised and stew dish called “estopado” in our dining table. With the delicate and gelatinous fat and skin as well as succulent muscle meat with layers of tendons of pork knuckle, “estopado” is a likely source of a meal made in heaven.

“Estopado” is a sweet-tangy Filipino pork dish where pork, usually with layer of fat including the hind, is braised and then simmered in pineapple juice and spices and slightly sweetened with brown sugar. Slices of ripe bananas are usually added and sometimes even chunks of pineapple for variation. While there are several distinct recipes in the internet and cook books that use the same name, this version here is the kind of “estopado” that I am familiar with. Variations using other meat such as ducks and other exotic game birds and poultry are usually spicy, no longer including bananas and cooked until dry and oily or with just a small quantity of sauce that remains. 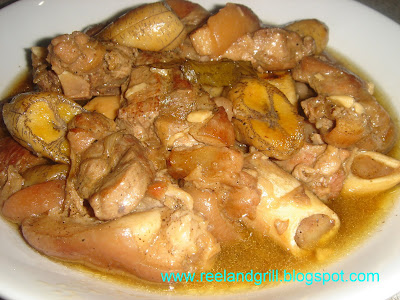 While other cuts of pork can be used for the dish like belly or “liempo”, pork shoulder or “kasim” and leg cuts; knuckle or hock or “pata” is my favorite part. For me, the amount of fat, the type of meat and the presence of tendons and ligaments all complements one another and works for a perfect “estopado”.

To cook my version of the dish, I will be using about 2.3 kilograms (about 5 lbs) of pork knuckle smoothly cut up by the meat saw of the supermarket. Such a beautiful pile of meat! 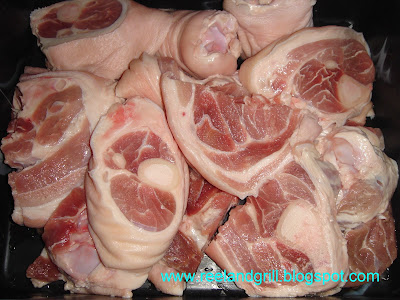 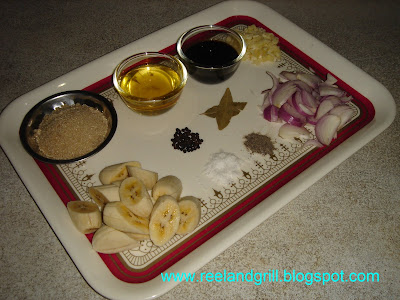 The most important ingredient here is about 1 liter pineapple juice. But since I don’t have a ready canned pineapple juice at the moment, I substituted the juice of one fresh pineapple (peeled, chopped, added with 2 cups water, blended to smooth consistency and strained to remove the pulp) and about 2 tbsp vinegar since the juice is quite sweet already. 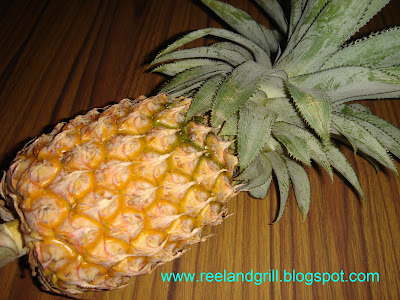 In a mixing container, place the meat and add in soy sauce, ground pepper, salt and MSG (if using). Combine properly to evenly coat the pork pieces. Marinate for at least an hour. 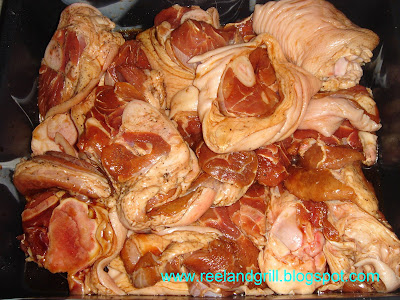 In a wide pan, heat the oil and fry the pork pieces in batches until both sides of the meat are lightly seared. Continue frying until all meat is lightly browned. Set aside. 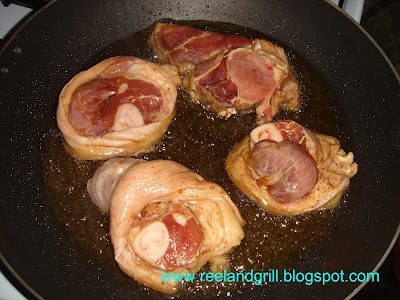 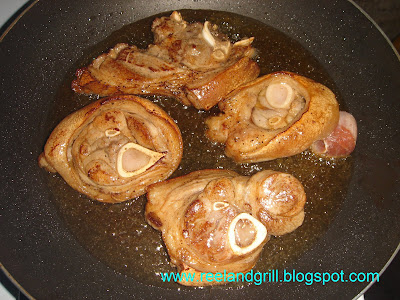 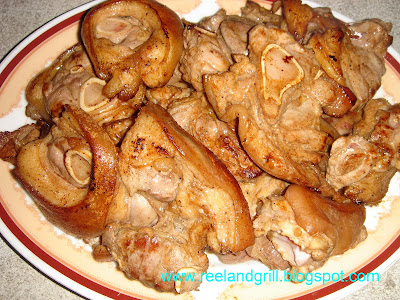 In the same pan, slightly fry the bananas as well then set aside. 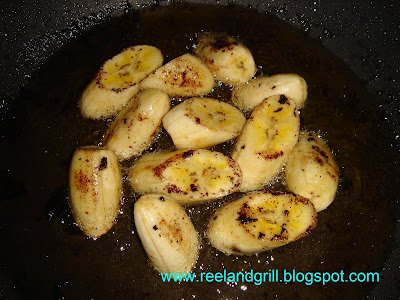 In a large wok or heavy casserole, arrange the seared meat. In between them place the garlic, onions and bay leaves. Pour the pineapple juice and vinegar and simmer on medium heat until the liquid is boiling. Adjust the heat setting to low and continue simmering until the meat is pork tender and its hind gelatinous. 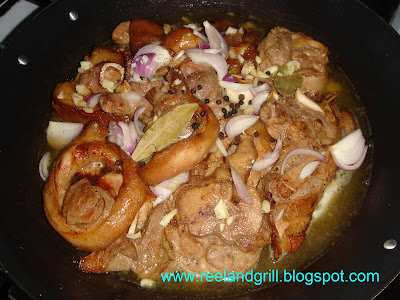 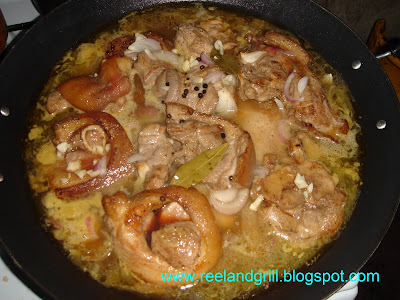 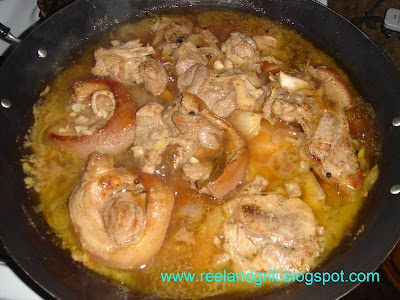 When the liquid is slightly reduced, add in bananas followed by the brown sugar. Simmer further until the bananas are cooked through and sauce is slightly thick. Taste and adjust the seasonings. Simmer for several minutes more or until your desired sauce level is attained. 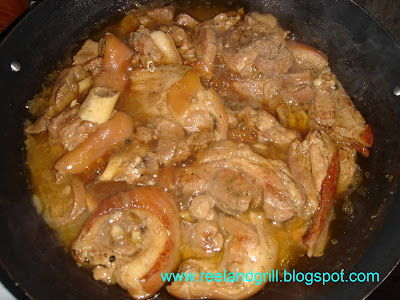 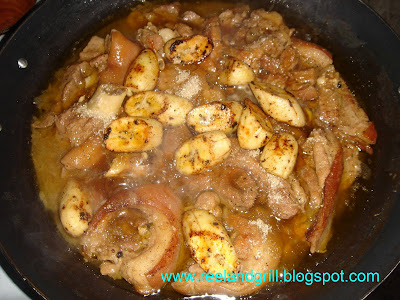 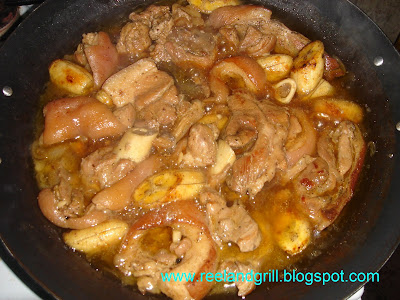 Transfer in wide serving plates and serve with lots and lots of steamed rice. This is so tasty…….a little sinful………but utterly delicious! :-) 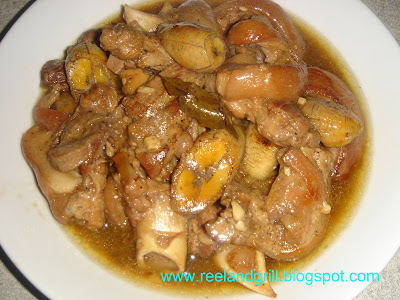 Some people want this dish prepared dry and oily (“iga”) while others prefer it still saucy. This one is more of the latter as our group wants some sauce to be slathered on the piles of tasty jasmine rice on our plates. Really yum yum! c“,) 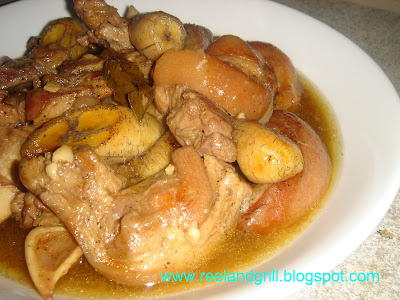