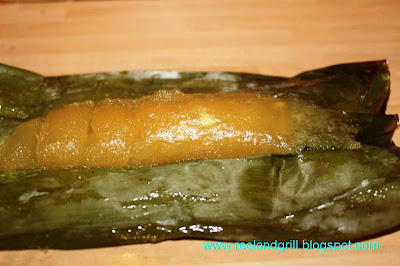 It’s the Season of Lent and Holy Week is almost here. Apart from moments of reflections, it is a time for family gathering. Expect to see different varieties of native “kakanin” in most Filipino families’ dining tables. It is part of the significant occasion ……… an important element of the tradition ……… particularly on the aspect of “handaan” or food preparation. Just in time for the season, we are glad that our friend Fely of London is willing to share her most requested native delicacy called “suman” (in the Philippines). In particular, a variety that is made from the starchy tuber called cassava or “kamoteng kahoy” or “balinghoy”.

Honestly, this post makes me really excited. True! I love this native “kakanin”. It’s my top favorite among the various types of “suman”. I used to buy it from elderly ambulant vendors directly coming from the barrios and lining the streets of the Tarlac Public Market every morning selling what seemed to me as their home-made “suman” from backyard-harvested crops. That was a score and 8 years ago when I was still a teenager helping my parents attend to our fruits store. While I find the sticky banana leaves wrapping a little too messy, the tasty cassava filling is such a comfort food that I would buy regularly.

For non-Filipino readers, “suman” is a type of rice cake or pudding originating from the Philippines usually served wrapped in banana or palm leaves. It is typically made from glutinous rice (but also from root crops such as cassava) cooked in coconut milk and often steamed. It is also known as “budbud” in the local dialects in the southern parts of the Philippines. It is among the popular sweet “kakanin” or traditional snacks or “merienda” of the Philippine cuisine.

This snack or dessert dish called “sumang kamoteng kahoy” refers to the finely grated cassava roots, mixed with sugar, sometimes with coconut milk, wrapped in banana leaves and steamed. Preparation follows a pretty simple recipe which I have not realized as such until Fely disclosed her recipes with us. It is really very easy. In fact, I could hardly believe the simple process that I tried it myself first to verify the tenacity prior to this posting. :) 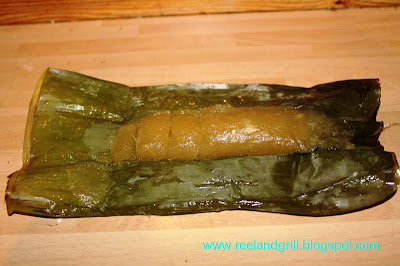 Also called yucca or manioc, cassava, is a woody shrub of the spurge family. The extensively cultivated plant for its edible delicate-flavored tuberous root is native to South America. It is a major source of carbohydrates and considered an annual crop in both the tropical and subtropical regions. Cassava roots are very rich in starch, and contain significant amounts of calcium, phosphorus and vitamin C.

As a reminder though, cassava roots should not be consumed raw because they contain two glucose derivatives capable of producing cyanides. The level of toxicity in the produce is signified by the two varieties namely sweet and bitter. The so-called sweet (which is actually not bitter) cultivars can produce as little as 20 milligrams of cyanide (CN) per kilogram of fresh roots, whereas bitter ones may produce more than 50 times as much.

For some sweet varieties, the cooking procedure is sufficient to eradicate all toxicity. The cyanide is carried away in the processing water and the amounts produced in domestic consumption are too small to have environmental impact. The bitter varieties used for production of flour or starch must be processed to remove the cyanide-producing substances. 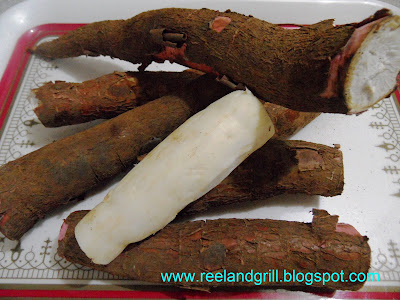 In spite of the complexity above, it is reported that cassava is the third-largest source of carbohydrates for meals in the world. The long and tapered root, with a firm homogeneous flesh encased in a detachable rind is known in many names such as “yuca” in El Salvador, Bolivia, Costa Rica, Colombia, Cuba, Ecuador, etc. “kappa” in India, “maniokka” here in Sri Lanka, “ubi kayu” in Malaysia, “singkong” in Indonesia, “mushu” in China, “tapioca” or “manioka” in Polynesia and as stated above, “kamoteng kahoy” or “balanghoy” or “balinghoy” in the Philippines. 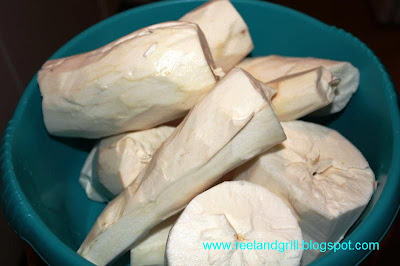 The first step is to finely grate all the chalk-white tubers. If you are to do it alone, expect to have an achy armpit afterwards. :-) 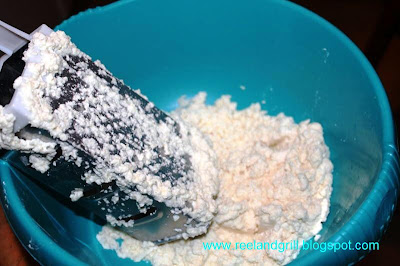 Next, some wide young banana leaves are needed. Cut them up to individual sizes about the dimensions of a bond paper. Heat both sides of the cut up leaf on open flame to soften them and avoid breaking during folding. Wipe the surface with a clean cloth or table napkin. Do it for the rest of the leaf pieces. 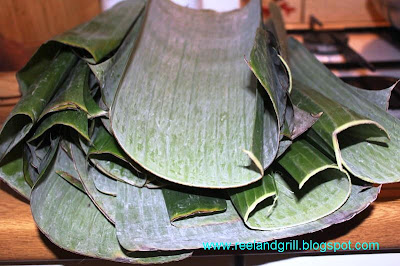 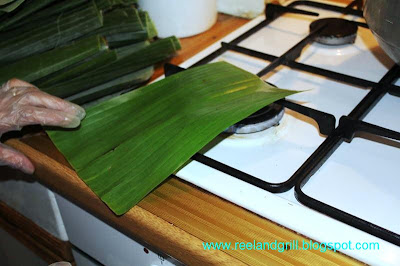 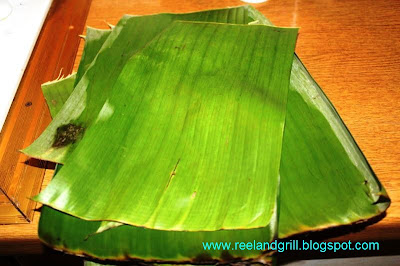 Sweeten the grated cassava with about 2 cups light brown sugar. To check if you have the right sweetness, make a small patty from the mixture and fry it on small amount of butter. Yes, it’s “maruya” you are making. If you are satisfied with the taste of the “maruya”, proceed with the “suman”. Otherwise, adjust the amount of sugar as necessary. Some would add coconut milk at this point, but Fely is not impressed by it so let’s forget about it just now. 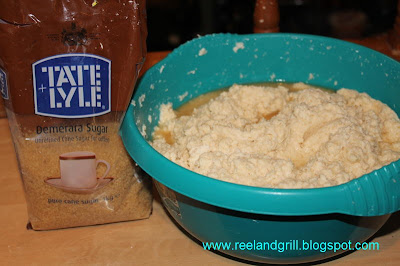 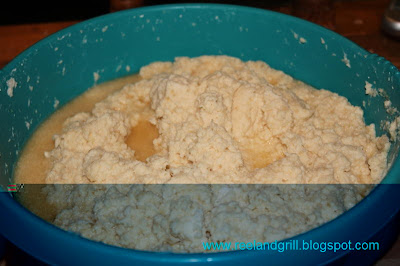 Carry out the individual wrapping of “suman”. Lay one piece of banana leaf on a flat surface and add about 5 tablespoons of cassava mixture. The yield size really depends on your preference and to the width of the leaf. Carefully fold one side to cover the filling and continue rolling to wrap it around. Fold either ends to seal in the filling. 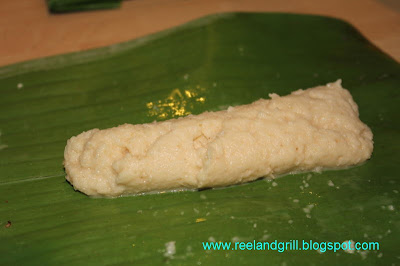 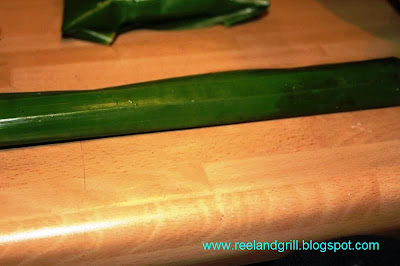 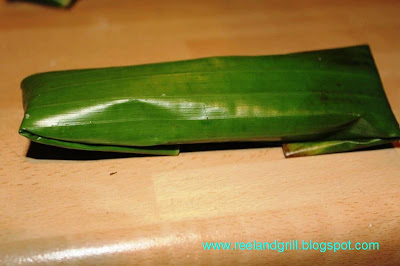 Continue wrapping until all mixture is used up. Arrange them properly in the steamer. 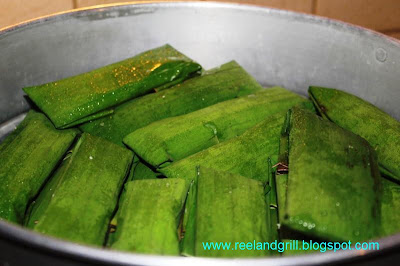 To cook, steam it for about 25 minutes under briskly boiling water. Continue steaming until it becomes firm suggesting the filling is fully cooked through. 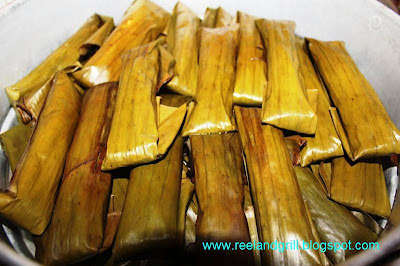 To check if the “suman” are nicely cooked, get one, carefully peel it off and do an actual tasting. I really like this part. :-) 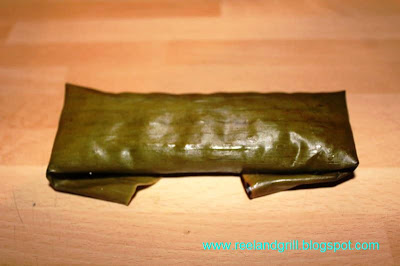 There it is ……… pure cassava goodness that comes in a rather small and sticky package. Hmmn … fragrant and yummy! :-) 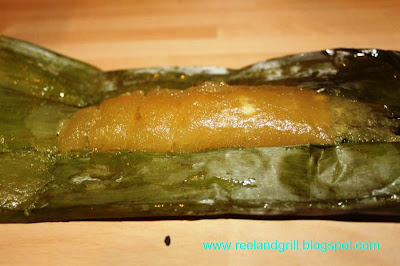 Our friend Fely is just so happy to share her simple yet very tasty cassava “suman” recipe. This is my comfort food and could probably be yours too. We thank you Fely as we await your next recipe-share.

Try it friends and readers and you’ll surely have smiles as sweet as Fely’s shown here with her proud daughter Joan. 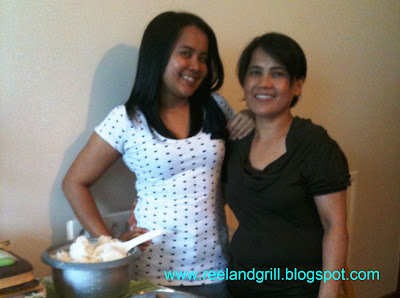 I recently prepared this dish and it’s a huge hit among my friends. I intend to do it again very soon as we are already craving for it. Enjoy! c“,)
Posted by Cuisinegineer at 6:44 PM