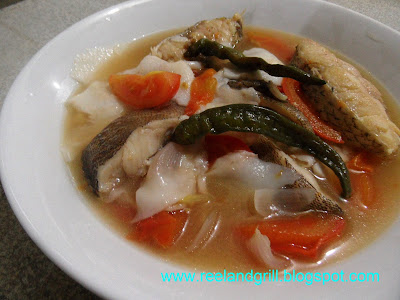 This is quite an unusual but exciting “sinigang”, the generic term that refers to highly varied Filipino stew flavored with any of the many types of natural souring agents such as tamarind, camias or “calamansi”. The use of young or tender coconut in the dish, both of its nutritious water and soft white kernel, is utterly innovative and truly promising, culinary speaking that is.

The idea is pretty rational too considering the popularity of “sinigang” and the abundance of coconut tree throughout the whole Philippine archipelago. It pretty satisfies the conditions that would make the seemingly special dish actually a practical alternative still falling within the range of the average (a.k.a. tight) budget of most Filipino family.

This type of “sinigang” was first mentioned to me by a friend who visited Mayon Volcano in the Bicol region where he learned and has actually tried the dish. Apparently, there is a restaurant in the region who wittingly concocted this “sinigang sa buko” recipe (a variation) which eventually gained wide acceptance among its guests and soon became the restaurant’s signature dish. In reality, there is no secret to the recipe, just plain ingenious concept that works. Its major difference from a typical “sinigang” lies only on the usage of tender coconut’s sweet and refreshing water as well as its spongy and milky flesh. That’s all. It’s simple but brilliant.

The restaurant usually uses slices of tasty blue marlin for the dish. But of course, wahoo or seer fish (“tanigue”), trevally (“talakitok”), yellow fin tuna and other fish varieties and even pork or beef are also options. For this preparation however, I intend to use slices of the predatory coral fish called grouper or “lapu-lapu”. No, I’m not trying to cheat here. I would admit that with grouper, my “sinigang” is probably one notch more delicious already but what can I do, in this part of the world (in our area at least), “lapu-lapu” is the much cheaper fish and easier to come by. Seriously! Its price is almost the same as the short mackerel or “alumahan”. :-) 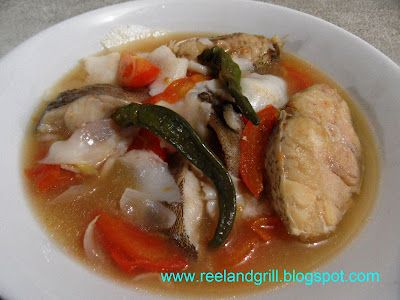 “Lapu-lapu” is such an exquisitely tasty fish with succulent white silky meat. It is a prized catch in the Philippines, Hong Kong, Macau, China and other Southeast Asian countries. It commands a high price and considered a high end seafood commodity.

Although it is not a fierce fighter by angling or sports fishing standard, the delight it provides during meal is enough for me to smile whenever I hook and land one either from shore casting or bottom fishing. What it lacks in power to fully sustain an adrenaline pumping fight (in fishing), it makes up in taste in the dining table. :)

For some reasons however, Sri Lankans are not so fond of coral reef fishes particularly those with bright colors which include groupers. In fact, we noticed that they prefer the silver (or white) and black colored fishes making the likes of grouper, snapper, emperor, breams, mullets, etc. less expensive. :-) Hence, here, we Filipinos can cook “lapu-lapu” as often as we want; even as simply “paksiw” or “pangat” or fried or “steamed” and not really rip a pocket.

To prepare the dish, about 600 grams cleaned black grouper would be enough. These slices of fish are a combination of 2 slices from a huge grouper which we recently purchased and 1 medium-sized grouper I caught last weekend while shore fishing. 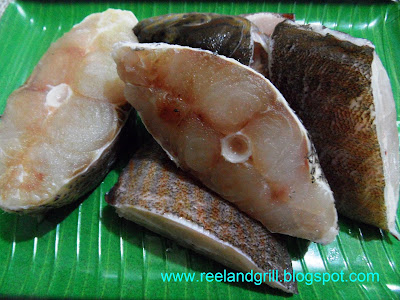 Since my fish is rather special, let me use a special variety of coconut too - the King Coconut of Sri Lanka locally known as “Thambili”. This coconut variety is indigenous to the country and its young fruit is a common refreshment drinks sold all-over the country. It is harvested young and highly valued for its sweet and nutritious coconut water and kernel. 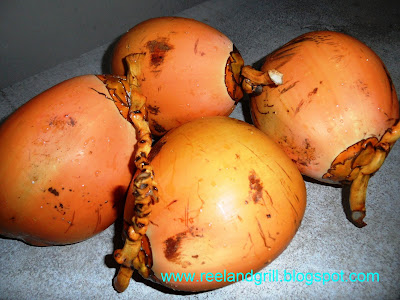 For the dish, the water and soft kernel of 1 young king coconut should suffice the requirement. 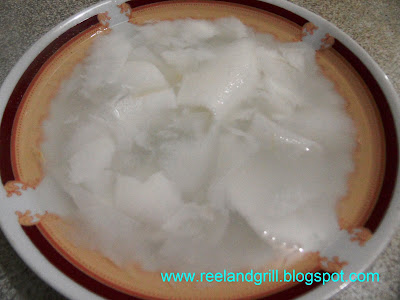 The rest of the ingredients are as follows: about 1½ cups water (or rice washing), 1 small piece of ginger, peeled and sliced, 1 large onion, chopped, 2 pcs plum tomatoes, chopped, 1 tsp salt or to taste, 2 pcs whole green finger chili (but mine is colored violet of sort), and of course ½ sachet tamarind base “sinigang” mix. If you prefer using fresh tamarind fruit, by all means extract its pulp after boiling and use it in lieu of the mix. It is still the best, provided you have the liberty of time. In a heavy casserole, pour the water let it boil on high heat. Add in ginger, 2/3 of the onion and 2/3 of the tomatoes and simmer on medium heat. Upon boiling, add in coconut water and kernel and continue simmering. 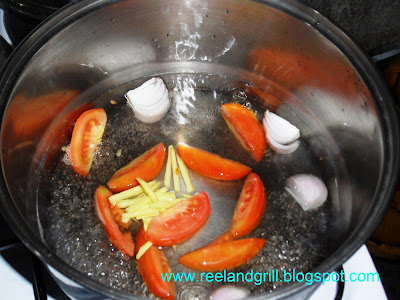 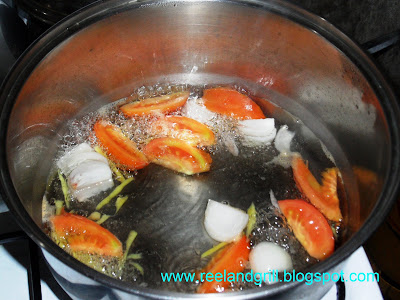 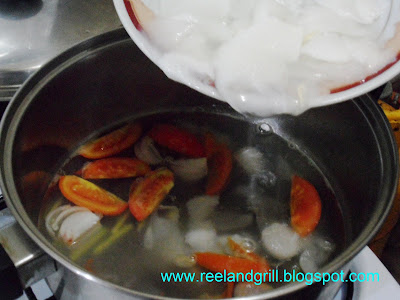 Add in fish slices and cook it through. Add chili peppers and season it with salt. Once the fish is thoroughly cooked, add in “sinigang” mix or tamarind pulp extract (if using) to the sourness level you like. Taste and adjust the seasonings. 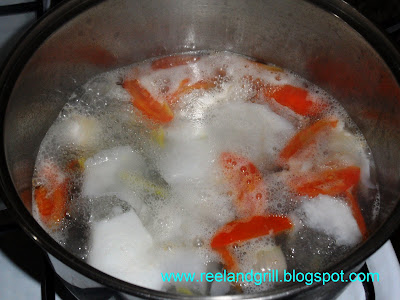 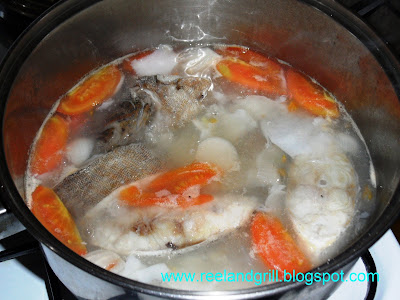 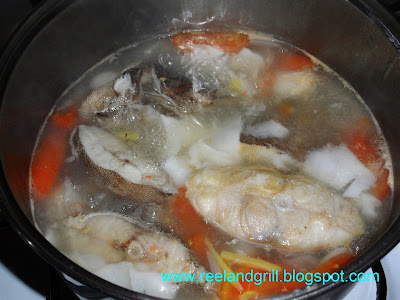 Finally, add in remaining onions and tomato, put the lid back on and cook for another minute. 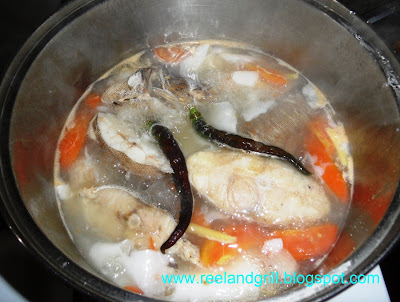 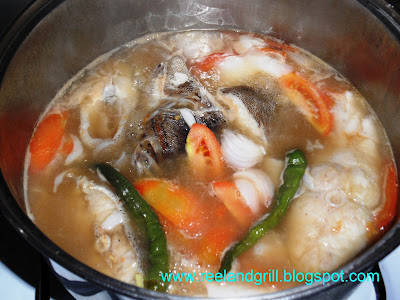 Transfer in a large serving bowl. Serve with a huge pile of steamed rice and some fish sauce + “calamansi” + chili (from the dish) dipping sauce for the additional kick. It’s soothingly good! 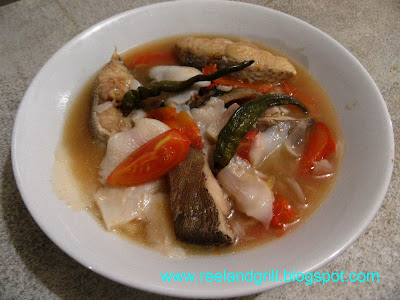 There it is, my version of “sinigang sa buko” made of “lapu-lapu”. It’s sourly delicious with a hint of sweetness, just the way I like it. I’ll cook this again soon. Enjoy! c“,) 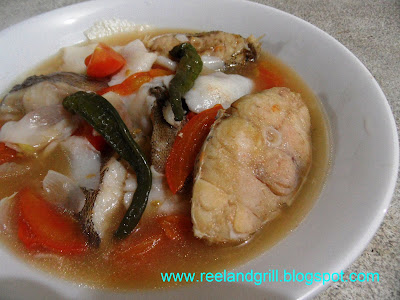 Posted by Cuisinegineer at 5:55 PM