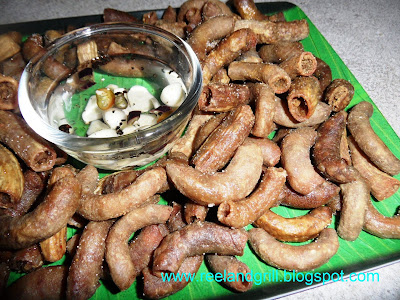 For a person who’s in serious diet, decadence could mean indulging in foods not in line or in total contrast with the diet program. Most often the foods involve are those excessively sweet, heavy on carbohydrates and overly laden with fats and/or calories. Since I am not so much into sweet foods, like banana cake, chocolate cake, carrot cake, no-bake or refrigerated cake, “ube halaya”, “maja blanca” and “minatamis na saging” (no … not really, I just like to make them :)), decadence to me is feasting on salty and oily foods like “crispy pata” (the all-time favorite), “crispy ulo” (unsightly but goodie), “rebosadong taba” (gush, I have to make this again soon) and as recently featured here “chicharon bulaklak” (the ultimate in crisp). The mere thought of these fatty but utterly tasty foods made me slobber and feel seemingly a pound heavier. :-)

In response to this month’s (April 2011) Kulinarya Challenge under the theme DECADENCE (I really like this term, for some reasons it sounds good and feels good), I thought of adding another sinful dish similar to the deep fried meats (or fats) above but this time using the equally challenging intestines of a swine or a bovine. Okay this maybe a bit unusual for non-Filipinos and definitely not for the squeamish as it involves part of the offal or internal organs of an animal used as food. While I usually use such intestines in “dinuguan” or blood stew, this is also good cooked as “chicharon”, either as a viand or side dish in a main meal, as a snack eaten in between meals, or as “pulutan” or bites munched over a bottle of beer.

Unlike the ordinary “chicharon” made from pork rind, I find “chicharon bituka” particularly fatty, salty and if store-bought, excessively seasoned with MSG. That’s on top of the fact that it is made from internal organ which has a high concentration of cholesterol. Thus, I consider it decadent to indulge with. But like most Filipino (and some Filipina too), I would still crave for it whenever I see some or even just hear someone talking about it. It is among the wicked Filipino foods that once you get used to are quite difficult to avoid or remove from the diet …… sort of kicking a vice. 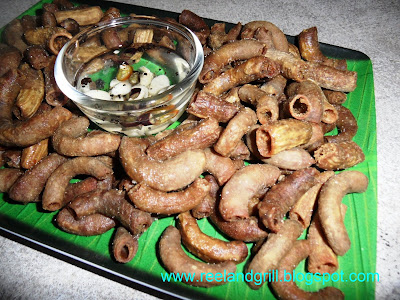 In anatomy, the intestine or bowel of either cow or pig, the most commonly used kinds of intestines in the Philippine cuisine; refer to the segment of the alimentary canal extending from the pyloric sphincter of the stomach to the anus. It is divided into two segments, the small intestine and the large intestine, each of which have particular culinary applications in Philippine cuisine. For cracklings or “chicharon” however, both the small and large intestines can be used although I am biased to the former which to me is more tender, flavorful and easier to cook.

Since intestine is the tract or canal which conveys and digests the food eaten where bacteria, enzyme and other microorganisms are always present, proper cleaning is a major component of the preparation. Apart from removing the unwanted contents of the tubular structure, it is also necessary to counter and eliminate the rather foul smell inherent with it using natural means. I used the word "natural" here to clarify that I am not amenable to cleaning intestines with soap or detergent as others are doing. No way! 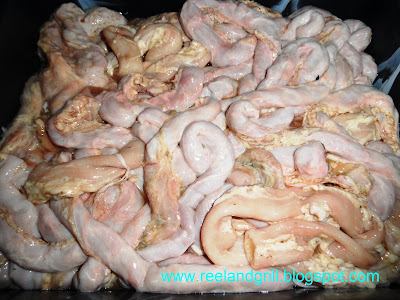 For the dish, we purchased about 2 kilos (about 4.5 lbs) of beef intestines. Pork should have been better but since that’s not available in the Sri Lankan markets and meat shops where we reside, beef is our only option.

The cleaning process I employ is through the use of running water, rock salt, vinegar and bamboo stick the size of a chopstick to reverse the intestines inside out. First step is to cut the intestines to about 40 cm (15 inches) segments. Wash them properly over running water then drain.

Fold one end of the intestine inside the tube. Then use the bamboo stick to push it through to the other end effectively turning the intestine inside out. Using hands, rub the intestines with rock salt to remove the white slimy membrane of the inner wall. Rinse it properly under running water. Do this several times then drain it thoroughly. 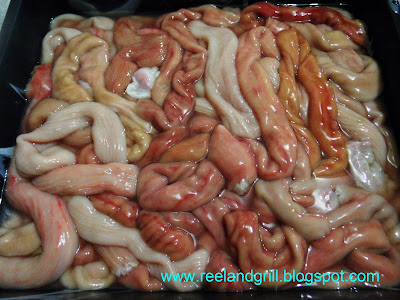 As the final step, add in about 1/3 cup vinegar. Mash the intestines with the vinegar to further remove fatty membrane and slimy substance. The intestine will turn to pale white color as the vinegar will remove traces of objectionable substances. Do this twice then rinse the intestines off. 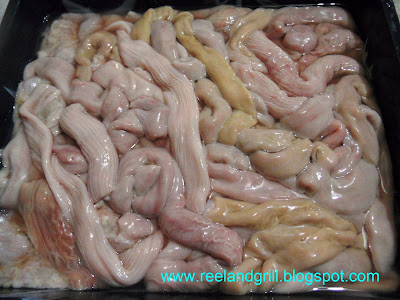 The few other ingredients needed are as follows: a piece of ginger, some iodized salt and some chili powder. The use of MSG, though really helpful in such fried dishes like this, is a matter of personal preference, so I leave it up to you. 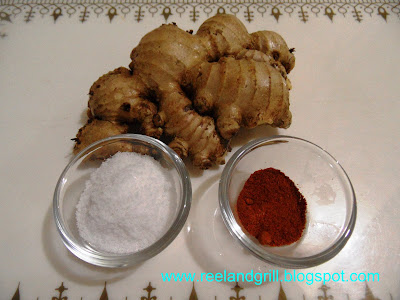 Like “chicharon bulaklak”, the intestines must be boiled first until tender before it is deep fried. Heat two large casseroles half filled with water. When the water is boiling, add all the intestines in the first casserole and let the water boil again. When it is already bubbly and scum starts to appear on the surface, lower the heat and carefully transfer the intestines to the second casserole with boiling water. 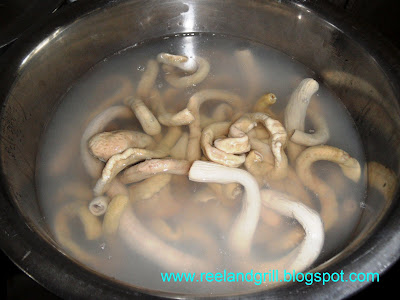 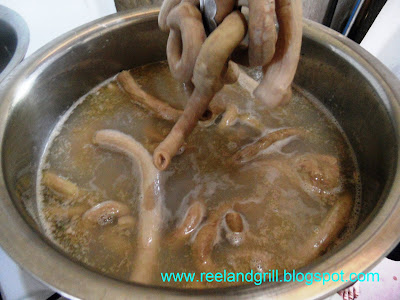 Add in one tablespoon of iodized salt and 2 crushed thumb-sized ginger and continue simmering on low heat until the intestines are just tender. It would usually take an hour, sometimes more, especially for the tougher beef intestines like this. 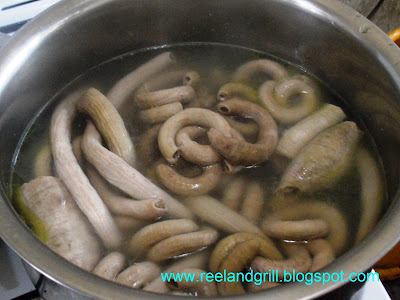 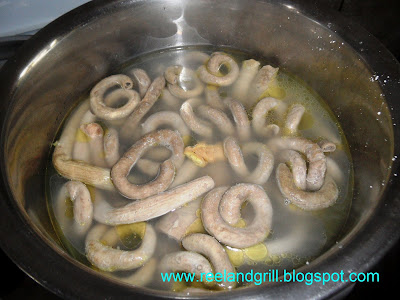 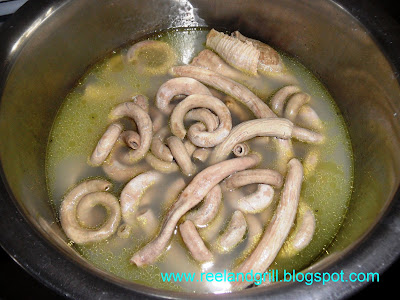 Remove the intestines from the broth; let it cool and slightly dry up. Cut it all up to about 1-inch length. Discard the broth. 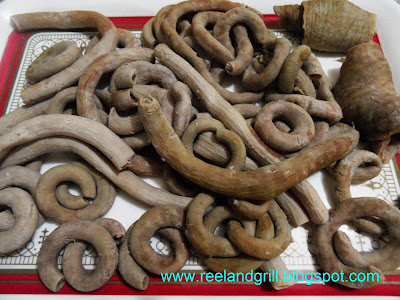 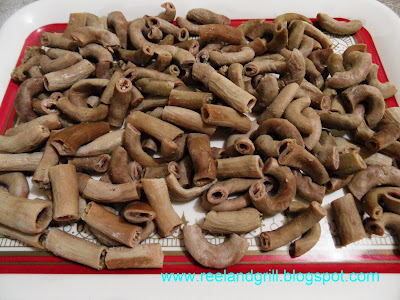 This involves two-time deep frying. Heat enough oil in a medium wok or frying pan. When the oil is really hot, carefully deep fry the intestines in batches until just light brown in color. This is just partially cooked at this point. Drain the excess oil using paper towels. While it cools down, continue frying with the rest of the intestines. 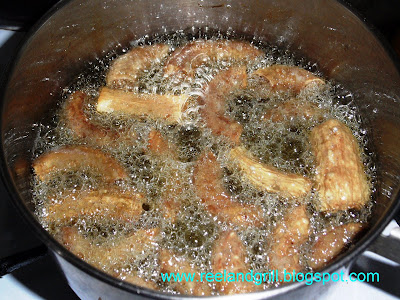 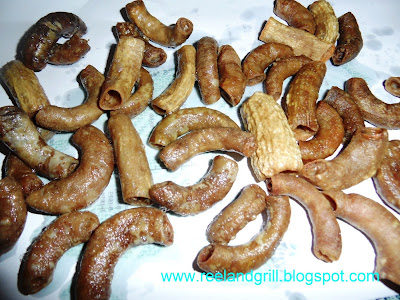 After the last batch, the first batch should be ready for the second and final frying. Repeat the deep frying process, but this time, cook until the intestines are golden brown and crisp. 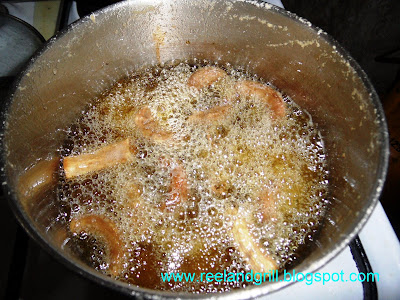 In the meantime, mix about 2 teaspoons of very fine iodized salt, about ¼ teaspoon chili powder (more if you like) and a dash of MSG (optional) in a small bowl until a seasoning like this is attained: 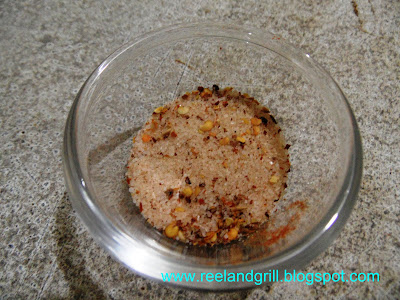 Drain the fully cooked “chicharon” in paper towels. Sprinkle them with the special seasoning while still hot. When it has cool down and become crisp, transfer in a wide platter and serve with the traditional vinegar + chili + garlic + salt dipping sauce. Yum yum!

Once in a while, it’s okay to indulge in decadent food like this. This is not a diet material of course, but for such a pleasurable treat like this, I’m sure we can all come out with reasons to suspend the diet for a day. 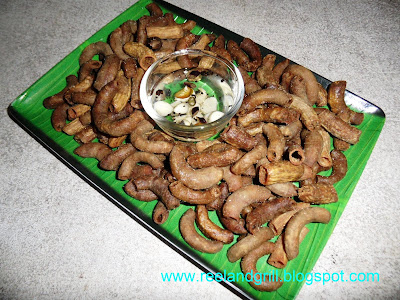 This is a very good meal starter sure to titillate the palates. We can also eat this as side dish in a meal and even better as “pulutan” or bites while drinking your favorite drinks with your friends. 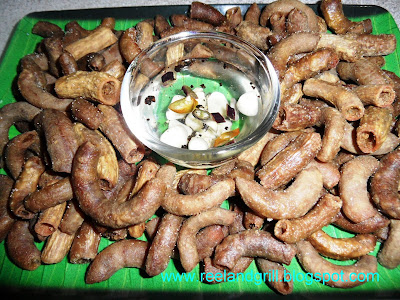 For other decadent Filipino foods, please check out the posts of other participating Kulinarya Cooking Club members. You'll be surprised with what they have to share you. Enjoy! c“,)
Posted by Cuisinegineer at 2:22 AM