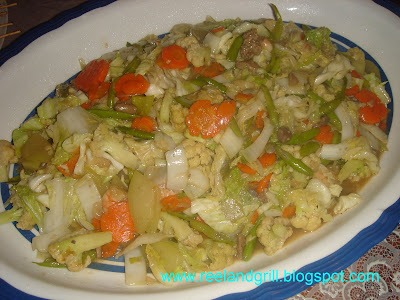 Chop suey is perhaps one of the most popular vegetable dishes in any Filipino special occasion. Not only because it’s easy to prepare, but because it looks stunning and taste pretty delicious with its many varieties of vegetables providing different flavours, colours, shapes and texture. In the recent birthday celebration of a friend, Ariel, it’s among the first dish that was consumed along with pork barbeque and “pansit”. Maybe both for health wise reason and good taste.

Chop suey (Chinese zásuì, "mixed pieces") is an American-Chinese dish consisting of meats of either chicken, fish, beef, shrimp, pork, chicken liver or combination thereof, cooked/stir fried quickly with vegetables such as carrots, cabbage, green beans, snow peas, cauliflower , bell pepper and celery and bound in a starch-thickened sauce. It is typically served with rice but can become the Chinese-American form of chow mein with the addition of stir-fried noodles.

Chop suey may be prepared in a variety of styles, such as chicken, beef, pork, king prawn, plain and special. Plain, or vegetable chop suey, is often one of the few traditional Chinese American take-out dishes offered without meat at many restaurants. 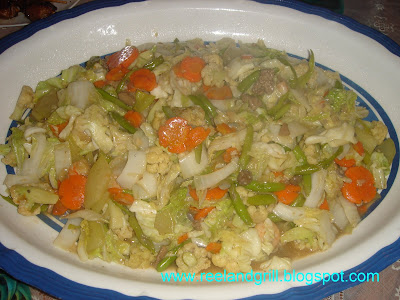 In a wok, heat cooking oil and sauté onions until transparent. Add garlic and sauté until light brown. Add chicken liver and shrimp and continue sautéing until cooked and brown. Stir in carrots and green beans. 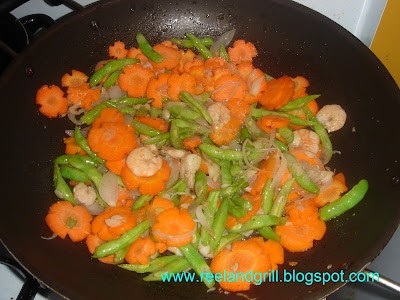 Continue cooking, stirring occasionally, for about one minute or two. Add chayote and cauliflower and cook for another minute. Then follow with bell pepper, celery and cabbage. Simmer for 2 minutes. Stir in dissolved mushroom soup mix, corn starch-shrimp juice mix, soy sauce and pepper. Season with salt according to taste. 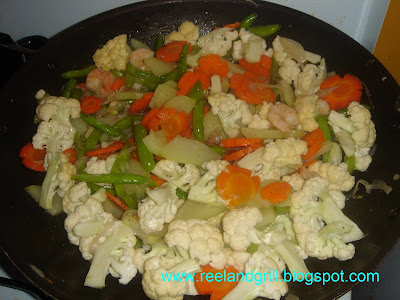 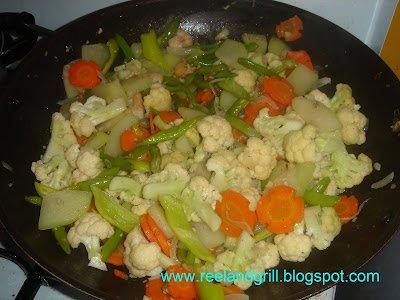 Cook until sauce slightly thickens and vegetables are tender crisp. Serve immediately. There it is! A quite healthy and tasty veggie dish, most of us now love, but hated before when we were kids. c“,) 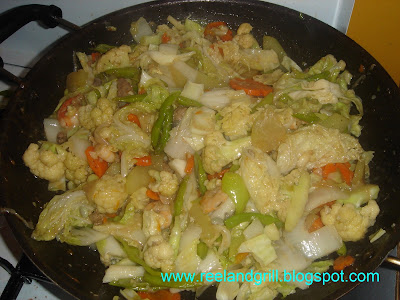