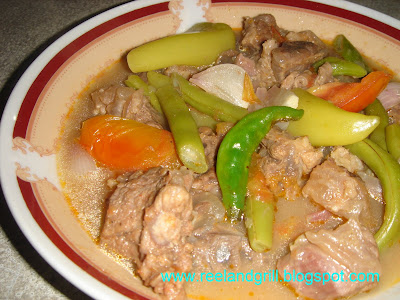 As mentioned in my “sinigang na tuna” post where I discussed the popular Filipino soup dish collectively called ”sinigang”, beef is one of the other meats that can be cooked the same way. Whilst I have cooked beef in several Filipino dishes like beef “caldereta” or “kalderetang baka”, beef adobo or “adobong baka” and the meaty beef “asado”, I have yet to prepare and feature it in a soupy dish. Although my favorite soup dish for beef is “nilagang baka”, a variation of the popular “nilagang baboy” or pork stew with vegetables , I intend to first prepare it as “sinigang” or stew with souring agent which in this case is a pre-mix tamarind powder.

Generally, beef is the culinary name for meat from bovines, especially domestic cattle or cows. It is among the principal meats used in the cuisine of America, Australia, Argentina and Europe. It is also an important meat in Africa, East Asia and Southeast Asia like in the Philippines, where it is much pricier than pork and chicken.

Beef is divided into basic sections from which steaks and other subdivisions are cut. These are called primal cuts. Different countries have different cuts and names. Different cultures have their own distinct ways of dividing and cutting the meat. The French and English make 35 differentiations to the beef cuts. The “Bodi” tribe in East Africa has 51 cuts. Even more remarkably, the Koreans differentiate beef cuts into 120 different parts. 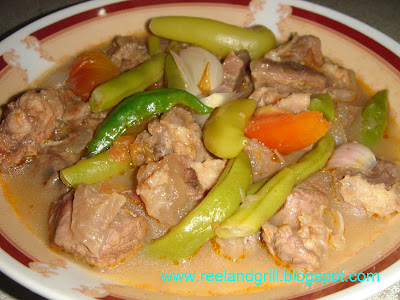 On the other hand, the lower half cuts compose of brisket which is often used in barbecue beef brisket, shank which is the toughest of the cuts and primarily used for stews and soups, plate which produces short ribs for pot roasting and types of steak such as the outside skirt steak and flank which is used mostly for grinding, except for the long and flat flank steak.

Given that the bovine’s legs and neck muscles are the ones that do most of the works, they become the toughest part of the meat. As an easy guide to the toughness or tenderness of the cut, remember that, the closer the meat to the hoof and horn the tougher it will be. :-) 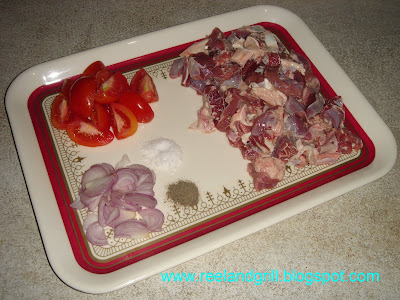 Since “sinigang na baka” is basically beef stew in tamarind, we are free to use whatever cut of meat we have. And since we will be stewing it over a long period of time until it becomes very tender, the 1.5 kilos (3.3 lbs) mixed cuts composed of various muscle parts with some tendons attached, cut to small sizes, would be an ideal choice. In addition, we need the following first set of ingredients: 3 pcs plum tomatoes, quartered, 1 pc medium onion, peeled and chopped, 1 tsp salt and ½ tsp ground pepper. These ingredients are shown above.

In a pan or mixing bowl mashed the tomatoes and onion. Add in beef and thoroughly combine the mashed vegetables with the meat. Add in salt and ground pepper and stir to evenly blend. 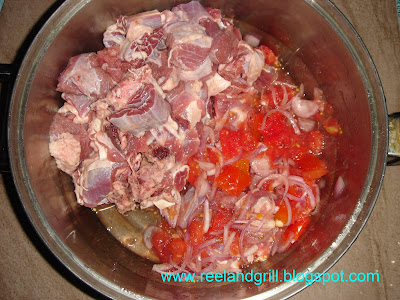 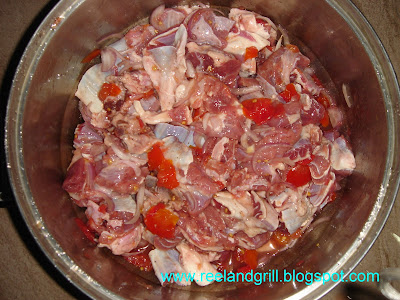 In a large wok of thick casserole, place the meat-tomato mixture and cook over medium heat. Don’t add any water as the meat and veggies will render their own juices as they are heated through. Continue cooking until the tomatoes and onion are very soft and have literally disintegrated at which time just a small amount of the liquid remains. 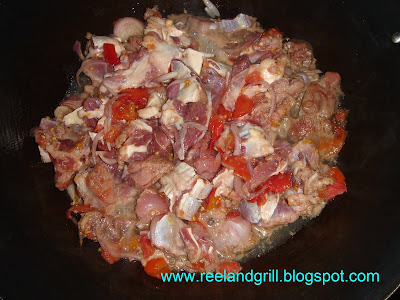 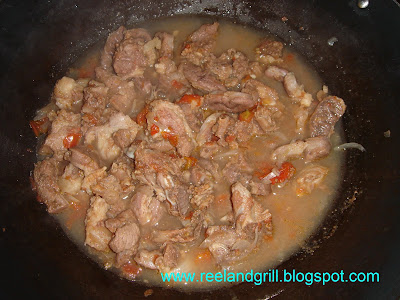 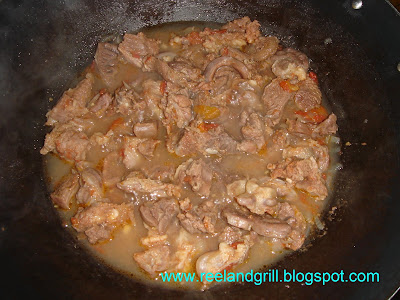 As also mentioned before, the traditional way that many consider as the secret to tasty “sinigang” is the use of rice washing in lieu of broth. So for this dish, add about 5 to 6 cups of rice washing (maybe more, depending on how soupy you want it to be), preferably from the second wash.

But of course, you are free to use just beef broth or simply plain hot water. :-) Continue simmering on very low heat until the meat is fork tender. Gradually add some more rice washing or broth as required, maintaining the desired level of soup. 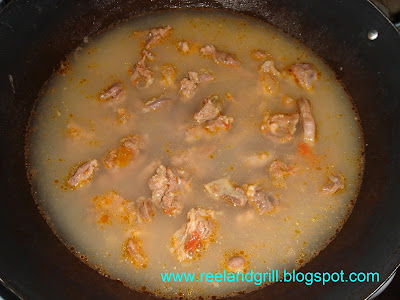 Meanwhile, prepare the other set of ingredients: Add-on vegetables of your choice, like tarot, Chinese cabbage, “bok choy”, white radish. “daikon”, eggplant, green beans, okra, swamp cabbage or “kang kong”, etc. But for me, I limit my veggies to the following: 1 bunch of green beans, trimmed and cut to 2 inches length, 1 pc tomato, cut up to 6 pcs, 1 pc small onion, peeled and cut up to 6 pcs, 2 pcs green chilies, diagonally cut each to 3 pcs , 3 pcs finger chilies, kept whole and some more salt and ground pepper to taste. 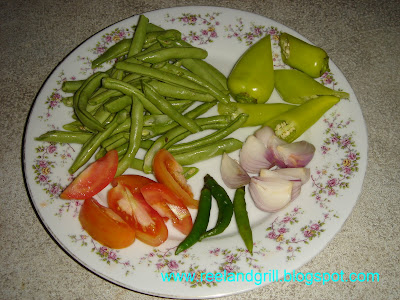 In addition, we need one pack of the ever-reliable tamarind base “sinigang mix” which is very popular and widely available in the Philippines and Asian groceries abroad. I prefer the one flavored with taro or “gabi” for richness. 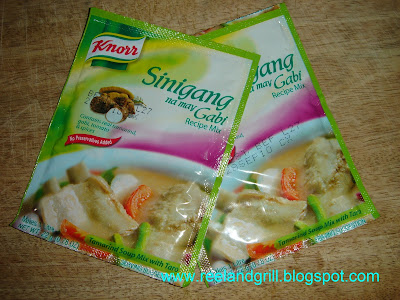 When the meat is fork tender, add in the green beans and green chilies. Continue cooking with the lid on until the veggies are partially cooked through. Taste and adjust the salt and ground pepper seasonings. Add in the tomato, onions and finger chilies and put the lid back on. 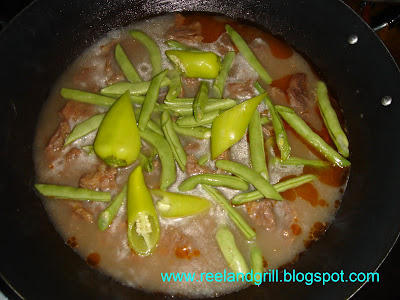 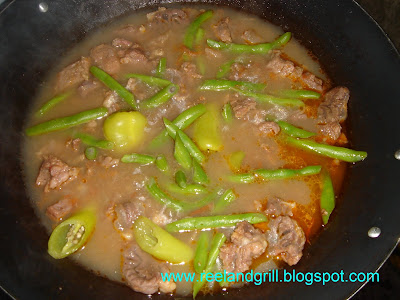 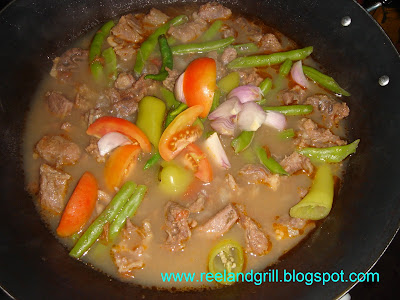 In a small mixing bowl, disperse the “sinigang mix” powder in ½ cup of water until it is evenly dissolved. Finally, add the mixture into the dish and cook for several minutes more. When the soup is again boiling, taste and when you’re happy with the sourly-spicy kick, it’s done. :-) 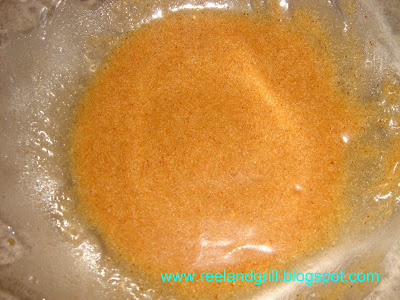 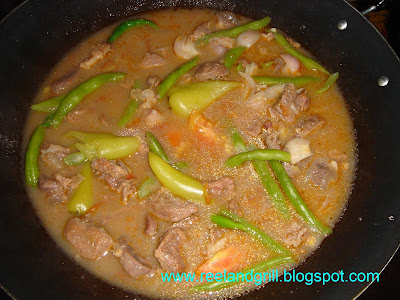 Transfer in a shallow bowl and serve piping hot. You can serve them altogether or separate most of the soup with the meat and veggies to allow easy scooping of the hot soup as you eat. Just don’t forget the huge servings of steamed rice. :-) 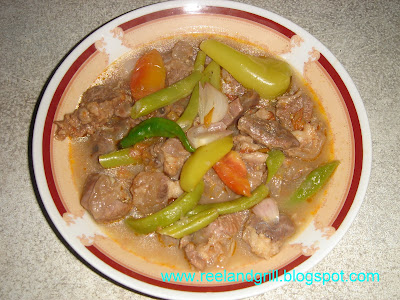 I’m not a huge fan of “sinigang” but if it is prepared this way, expect me to indulge with it like everybody else. The soup is just the way I like it, lightly spiced, not overly sour, tasty and comforting. The veggies are done just right and still crunchy. The meat is tender, juicy and delicious. Whew….You will surely enjoy this. c“,) 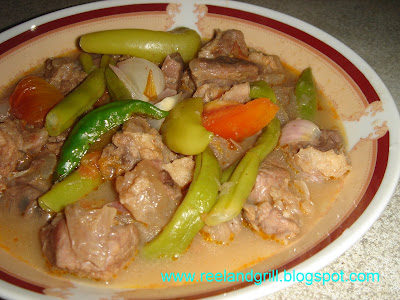