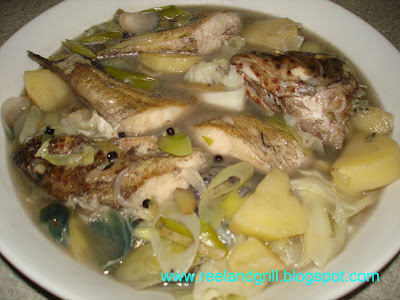 I can’t think of a better way to cook my “lapu-lapu” catch in my recent shore fishing adventure than by the popular Filipino stew dish called “pesa”. I first ate and since then has been heavily exposed to “pesa” in the “Capampangan” area of the provinces of Pampanga and Tarlac lying in the central part of the Luzon island of the Philippines. In the region, “pesa” is a regular table fare for the whole family, particularly for fishes such as the ferocious freshwater snakehead called mudfish or “dalag” or “bulig”, the bony but tasty milkfish or “bangus” and yes, the rather pricey but very delicious grouper or “lapu-lapu”.

Basically, “pesa” is boiled or stew fish infused with the strong flavor of ginger and added with some vegetables. The pungent flavor of ginger is required to counter the stench smell and taste of the fish and provide a tasty broth. In addition, fish are sometimes slightly fried first to further remove the stench prior to stewing. The soupy dish is served with an accompanying somewhat salty sauce made from either Chinese fermented soybean cake called “tahure/tauri” or fermented black beans called “tausi”, or sometimes using the Japanese fermented condiment called “miso”, mashed and then sauté in chopped onions and tomatoes. 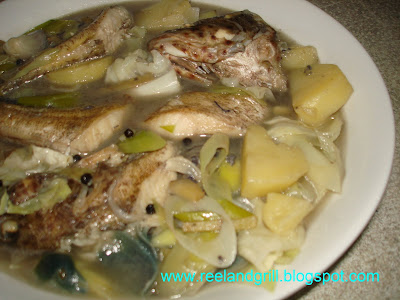 “Pesa” and its sauce well complement the Filipino staple food steamed rice. Like, “linaga/nilaga” or “sinigang”, it provides a quite complete meal compose of hot and comforting broth, healthy crunchy vegetables and succulent fish meat. The taste of the broth, when slathered on plain steamed rice could be further enhanced by the addition of a small amount of the sauce. My experience with “pesa” is that eating it is quite enjoyable that before you knew it, you have already consumed several cups of rice and would be feeling very full. :-)

The 2 medium groupers we caught while shore fishing and has been sitting in our freezer awaiting a good dish are just perfect specimen to cook the dish. The fish are thoroughly cleaned, scaled, gutted and washed. 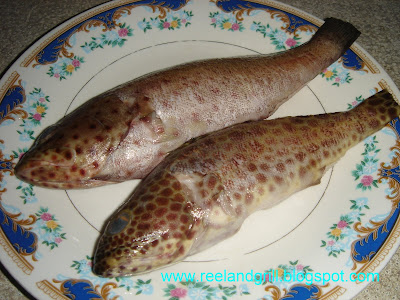 Cut up the fish into serving sizes then liberally season them with salt. As I have mentioned above, slightly fry the fish first to be assured of a good smelling and tasty broth. In a medium pan, heat some oil and fry the fish on both sides until just seared and slightly browned. Set aside. 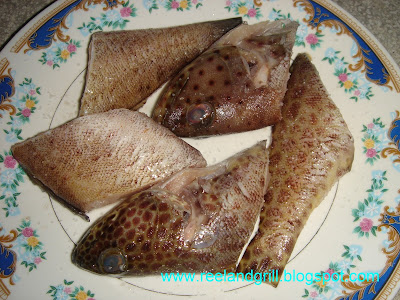 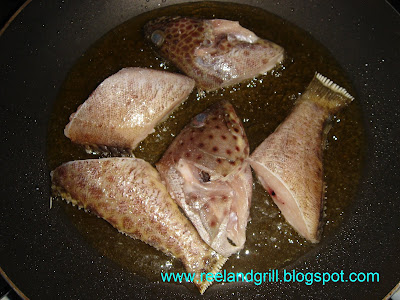 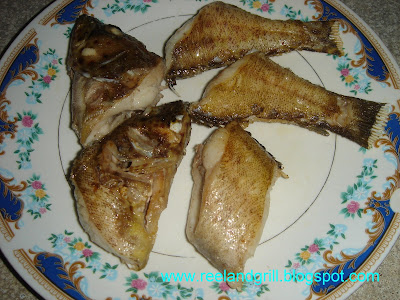 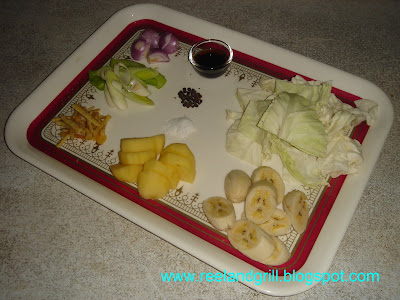 In Pampanga, the authentic way of cooking “pesa” requires about ½ cup of rice to be incorporated into the dish. For me though, I decided to just settle with the use of just rice washing (second wash) to attain the starchy flavor of the broth without rice grain swimming around. :-) 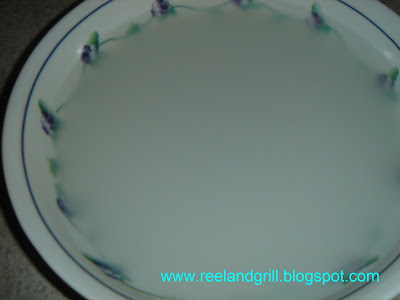 In a large pan or wok, heat the vegetable oil and fry the ginger followed by the onion. While sizzling in fat, add the fish sauce and stir to cook the fish sauce and lessen its pungent smell. Add in the potato and banana and continue sautéing until aromatic. Add about 5 cups of rice washing and simmer on low heat. Add salt and peppercorn and continue cooking until the vegetables are just tender. 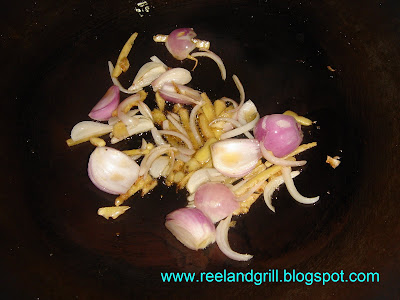 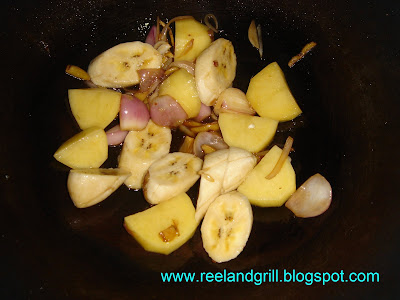 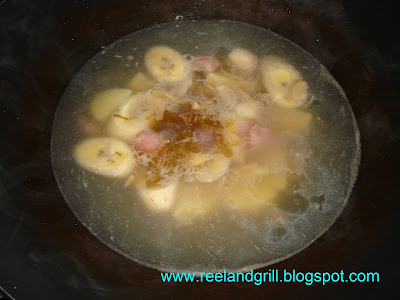 Carefully add in the fish and continue simmering. Adjust the broth level by adding some more rice washing. Adjust the seasoning as well. Add the leaks and finally the cabbage. Cook for several minutes more until cabbage is cooked through but still crunchy. 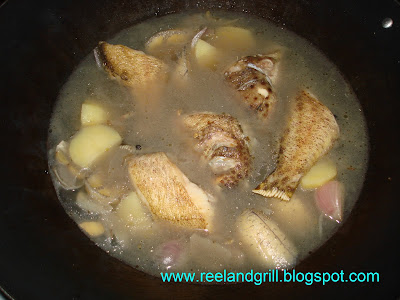 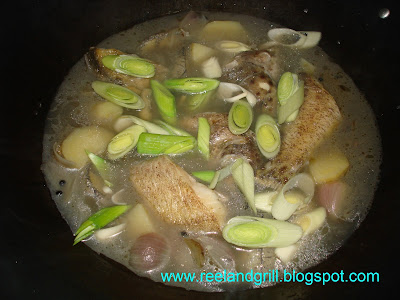 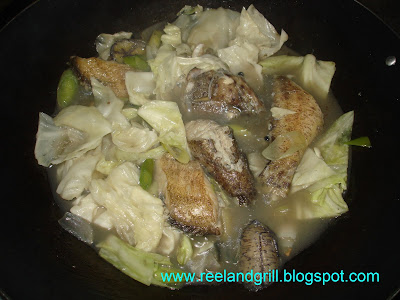 Transfer in a serving bowl and serve very hot. It should be accompanied by a sauce which will make the taste extra special. :-) 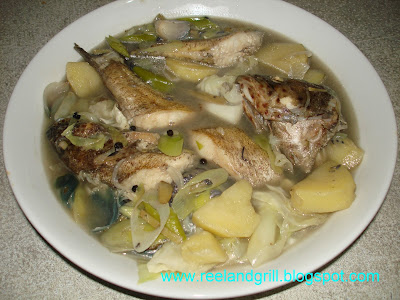 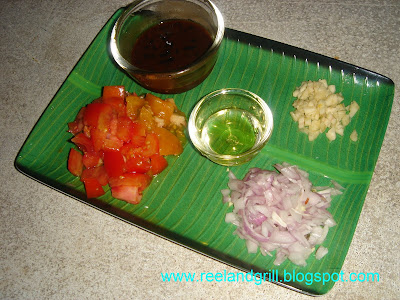 In a small sauce pan, heat the oil over medium flame. Fry the onion followed by the tomatoes until both have caramelized and disintegrated. Using the back of a spoon, thoroughly mashed the “tausi” beans in its liquid. Add this to the onion-tomato mixture and continue cooking. Add about ½ cup of rice washing to slightly thin the sauce consistency. 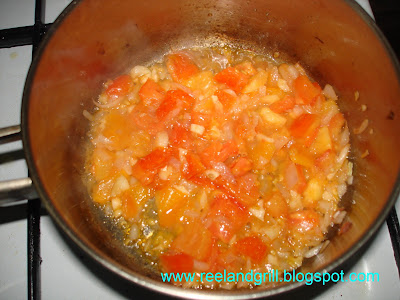 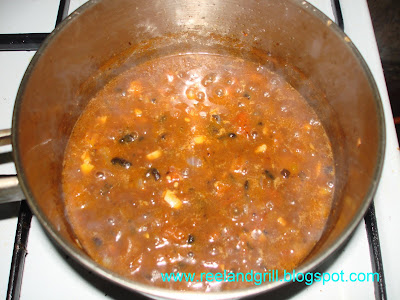 Transfer the sauce in a bowl and serve with the “pesa”. With the piping hot dish and its sauce, better be prepared to have lots of ready steamed rice. You will love the dish due to its good taste but will probably hate it because it could drive you to consume more rice. Enjoy though! Yummy! c“,) 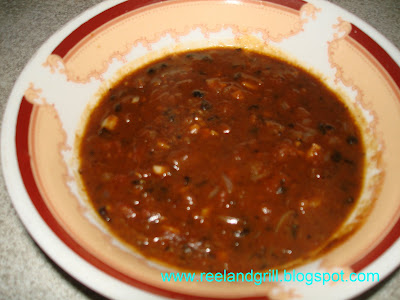 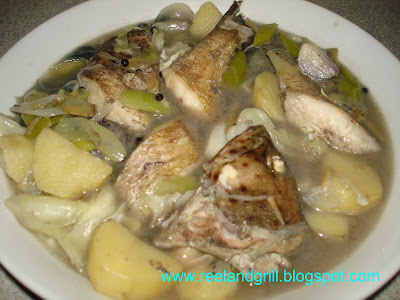