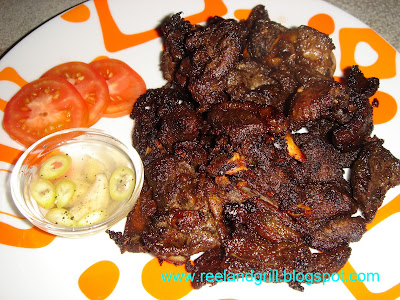 The title surely sounds exotic. After all, meat from wild boar or what is locally called “baboy ramo” in the Philippines and “wal ura” in Sri Lanka has become so seldom and difficult to come by. Most probably due to over-hunting in the past and the inevitable intervention of progress and development into their natural habitat (a.k.a. consequential destruction) which unnecessarily (and sadly) resulted to extreme depletion of stock in the wild and the subsequent enforcement of strict government initiatives as well the preservation efforts of various wildlife groups, having wild boar meat in your kitchen is quite a rare opportunity nowadays. At least, in some Asian countries, where unlike in the US and Europe, wild boar farms are quite few, if ever there are any.

Now, that I was able to acquire some portion of the meat from what they told me as a legally butchered wild boar from an operated farm, I am quite ecstatic to prepare a truly favorite Filipino dish called “tapa” from the exotic meat. As a disambiguation, “tapa” of the Philippines refers to marinated, dried or cured slices of meat, usually beef, pork and venison, although other meat or even fish may be used. The meat are thinly sliced and cured with vinegar, spices and seasonings as a method of preserving it. It is best served fried or grilled. This is not the same “tapa” or “tapas” of Spain which is the name referring to a wide variety of appetizers or snacks in the Spanish cuisine, usually eaten while drinking some wine in the bars.

Wild boar or wild pig (“sus scrofa”) is the wild ancestor of the domestic pig. Wild boars are native across much of Northern and Central Europe, the Mediterranean Region (including North Africa's Atlas Mountains) and much of Asia through Siberia and as far south as Indonesia and Sri Lanka. Principally for hunting purposes, wild boars have also been artificially introduced in some parts of the world such the Americas and Australasia. In some places, populations have also become established after escapes of wild boar from captivity. While the term boar is used to denote an adult male of certain species, including, confusingly, domestic pigs, wild boar also applies to the whole species, including "wild boar sow" or "wild boar piglet". 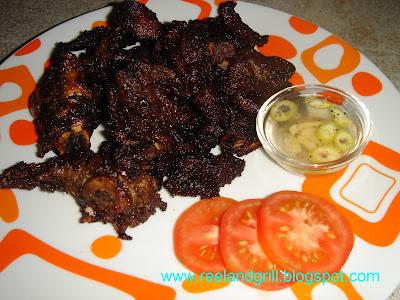 Wild boar meat is lean that should be generally cooked at lower temperatures than other meats. Wild boar, raised like beef, is range fed and therefore can be served on the rare side. In cooking wild boar, the rule of thumb is “low and slow”. Basically it can be barbecued, smoked, baked or stewed. In the Philippines it is also cooked “kaldereta” or “adobo” and for the initiated, “kinilaw” or “kilawin” or simply blanched and then marinated in vinegar and spices and eaten raw (though in reality, cooked in vinegar).

For “tapa” however, the most important thing, especially for wild boar caught in the wild, is to cure or marinate the meat very well. My personal experience dictates that it should be marinated or cured for at least 2 or 3 days for a more developed taste; successfully removing the stench of the boar meat which it acquires from its natural living habits in mud, marshes, woodlands and wet forests scouring and eating roots and tubers.

For this dish, I have about 2 kilograms (4.4 lbs) of fresh wild boar meat. The skin as well as the unwanted parts with heavy coagulation of blood are removed and discarded. The meat was washed several times and properly drained while still whole (before slicing). 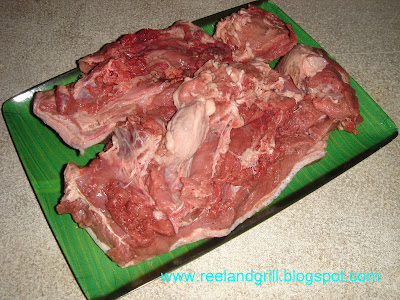 After the meat has drained, cut it into thin slices. Cutting should be across the grain as much as possible. The sections with bones are chopped to serving sizes with some meat remaining intact on the bones. I include this on the “tapa” being marinated. This is even tastier than the pure meat. REMINDER: Never wash the meat after slicing into thin strips. Not anymore at this stage. If you still wish to wash it, do it at your own peril. :-) 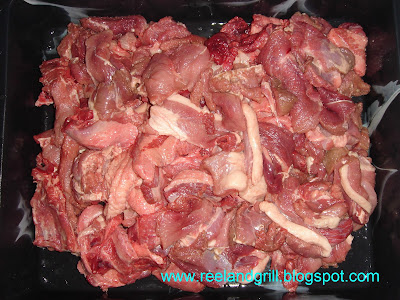 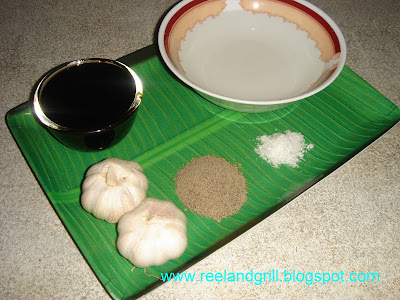 This is an easy, no fuzz preparation. In a mixing bowl place the sliced meat. Add all the marinating ingredients starting with vinegar, soy sauce and garlic. Then, continue adding ground pepper and MSG, if using. 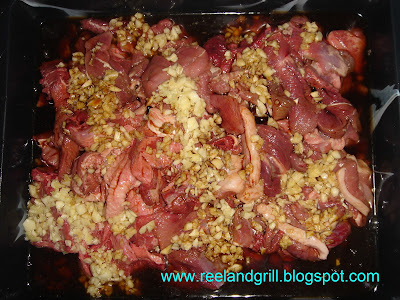 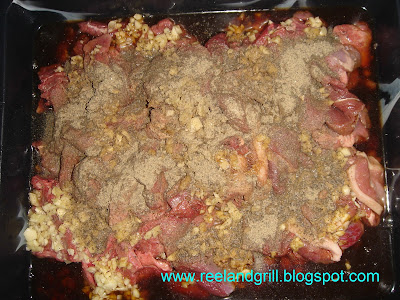 Mix everything until the marinade is fully blended and the meat is evenly coated and covered with it. This is a marinating-wet type “tapa”. But you can also dried the meat under the sun if you have the time and chance. 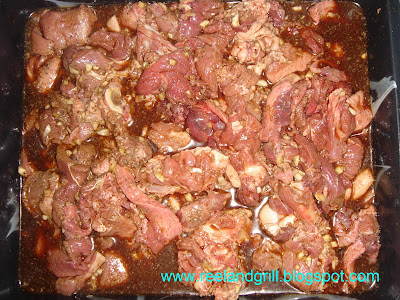 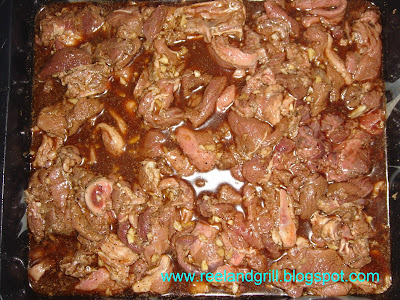 Place inside the fridge and marinate for 2-3 days for best results. Stir once in a while to ensure even infusion of flavor. Marinating overnight would probably suffice if really on a hurry but I find the taste still on the less developed side. Marinate it over 3 days and it will tend to become sour which some prefers……but definitely not me.

To cook, heat about 1 cup of vegetable oil in a wide non-stick pan. Take the marinated meat from the fridge and stir once again. 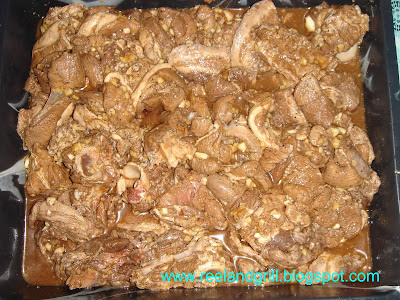 When the oil is already hot, cook the marinated “tapa” in batches. Fry each side until dark brown and just cooked through or according to your preferred doneness. 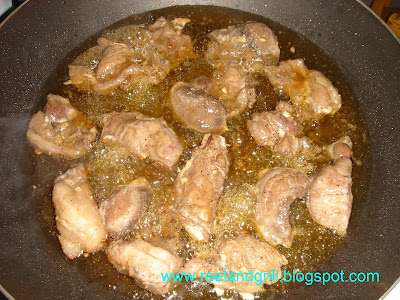 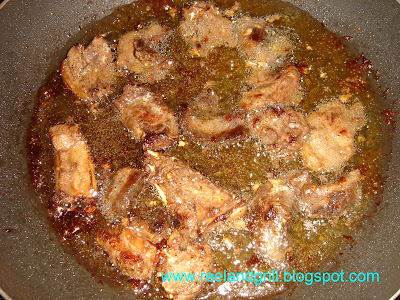 Continue frying in batches until everything is done. Properly drain the cooked “tapa” in paper towels to remove excess oil before transferring in serving plates. 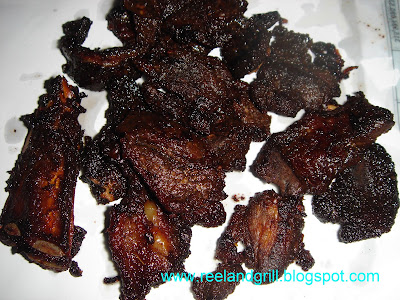 Serve with lots of steamed rice or better yet yang chow fried rice, some tomato slices and spiced vinegar dipping sauce on the side. Just like the Spanish “tapa” though, our group ate this truly delicious Filipino dish over a bottle of wine and lots of funny stories. 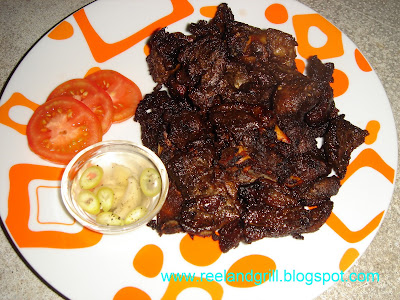 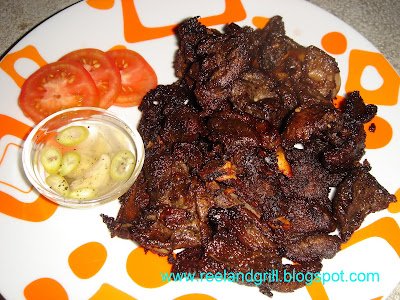