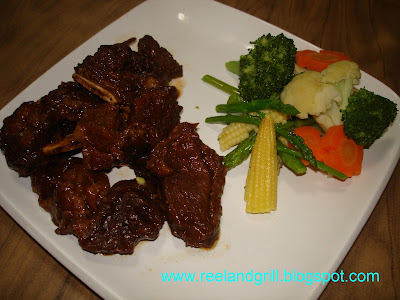 It’s been a while since my last post. Since last week, I have been busy on a special job assignment and so I thought I owe to present you guys with a rather extraordinary recipe worthy of waiting. But since I just returned and don’t have much time yet, let me first feature an equally important dish prepared by a colleague following the recipe I developed and posted here late last year under easy spare ribs. While my original recipe uses pork spareribs, my colleague tweaked it a little bit and used beef spareribs or short ribs and served the dish alongside steamed veggies. Brilliant Idea!

As discussed before, spare ribs or spareribs are a variety of pork ribs which are a long cut from the bottom section of the ribs and breastbone, just above the belly and behind the shoulder as oppose to baby back ribs which are from the top of the rib area along the back. It is considered to be more meaty and succulent than baby back ribs. For beef however, a slab of spare ribs can be too big so it is usually cut into thinner, lighter and more manageable sizes called short ribs. Short ribs or thin ribs are a popular cut of beef. Beef short ribs are larger and usually more tender and meatier than their pork counterpart. They are a cut from the rib and plate primals and a small corner of the square-cut chuck.

A full slab of short ribs is typically about 10 inches square, ranges from 3-5 inches thick, and contains three or four ribs, intercostal muscles and tendon, and a layer of boneless meat and fat which is thick on one end of the slab and thins down to almost nothing on the other. There are numerous ways to butcher short ribs. The ribs can be separated and cut into short lengths, typically about 2 inches long, called an "English cut", "flanken cut" across the bones, typically about 1/2 inch thick, or cut into boneless steaks, a style recently introduced in the US, as a cheaper alternative to rib steak. 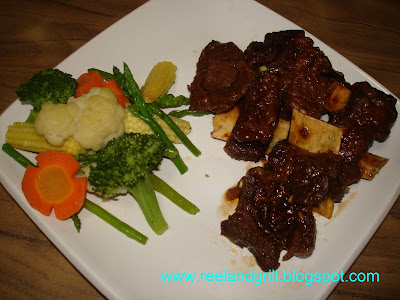 To cook this dish, we need about 1 kilogram of “English cut” short ribs or beef spare ribs. Here, some lean beef from the muscle area was included in the short ribs cut. The meat should, as always, be properly washed to remove all blood traces and unwanted tendon parts and thoroughly drained. 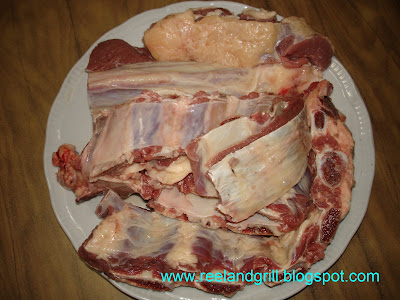 In addition to the short ribs cut up to 2 inches squares, the other ingredients needed to make the dish are: 1 head garlic, to be peeled and minced, several pieces “calamansi” or “calamondin” to be extracted to about 3 tbsp juice, ¼ cup brown sugar, ¼ cup soy sauce, 3 tbsp sweet-style catsup, ¼ cup seven-up or sprite, several pieces of bird’s eye chilies, to be finely chopped (optional), ½ tsp ground pepper and ¾ cup broth, if necessary during simmering. 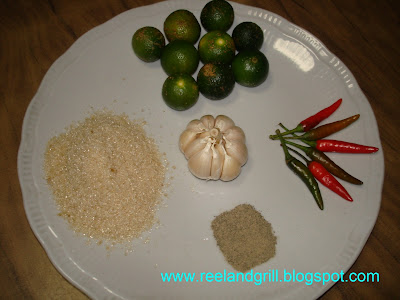 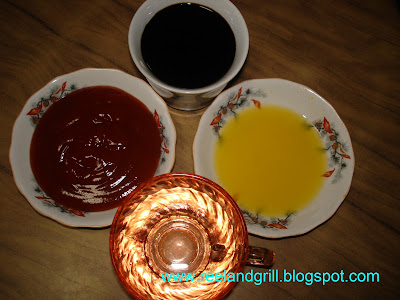 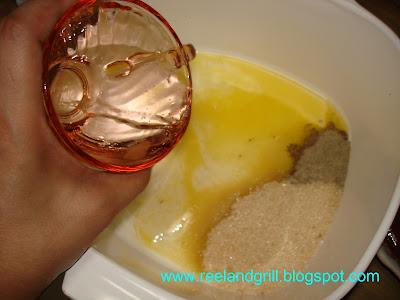 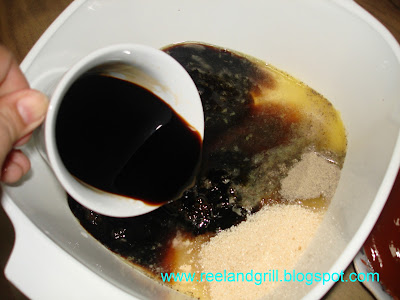 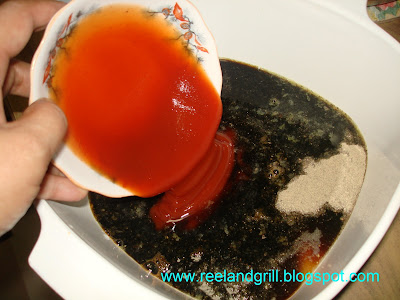 Stir the mixture to dissolve the sugar and properly combine all ingredients into a dark, rich and homogenous marinade. 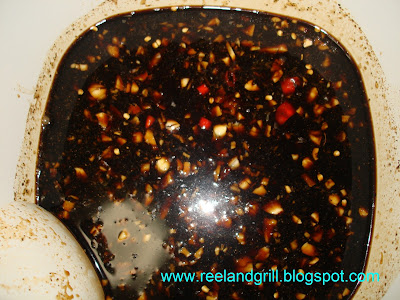 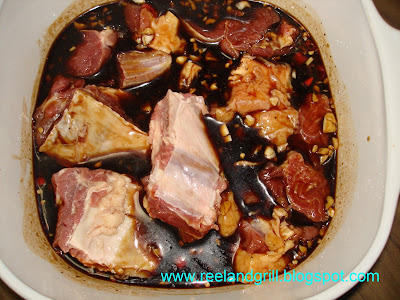 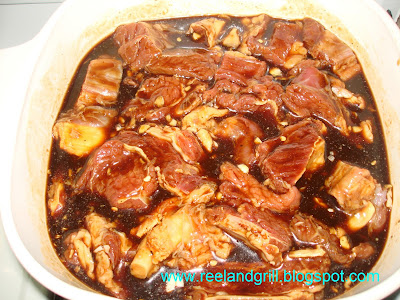 Cook the meat with the marinade on medium heat. Once the liquid boils, lower the heat and simmer with occasional stirring until the meat is fork tender, better yet very tender. Adjust the seasonings if necessary, or as per your preference. Remove excess oil that will float on the surface. The sauce will be reduced, becomes sticky and will basically coat the short ribs pieces. The bones should easily wiggle the succulent meat. 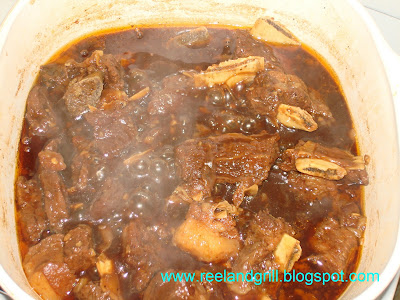 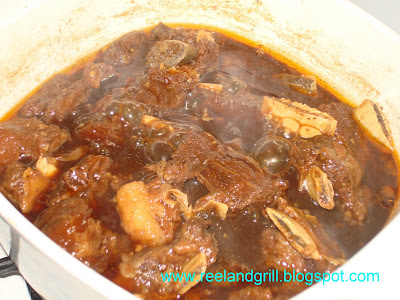 In the meantime, prepare the steamed vegetables. You are at liberty to use any kind of veggies. For my colleague, the following are the top choices: 1 bundle of asparagus, 1 pack of young corn, 2 medium carrots, 1 large head cauliflower and 1 large head broccoli. These are really exciting veggies! :-) 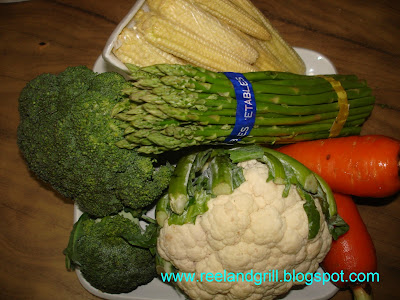 Prepare the vegetables by first washing them properly. Cut the asparagus into 2 inches lengths, cut the cauliflower and broccoli into flowerets, halve the young corn diagonally, peel and slice the carrots into small flowerets as well. 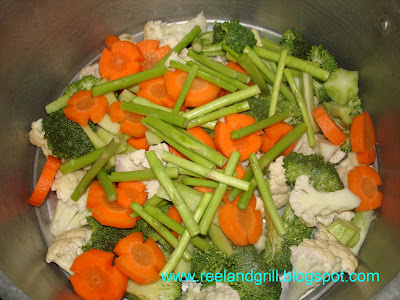 In a wide pan, heat a small amount of butter. Add in the vegetables and sauté until it releases some liquid. Lightly season it with salt and pepper. Cover the pan to steam-cook the veggies. Cook until veggies are cooked through but still crunchy to the bite. :-) 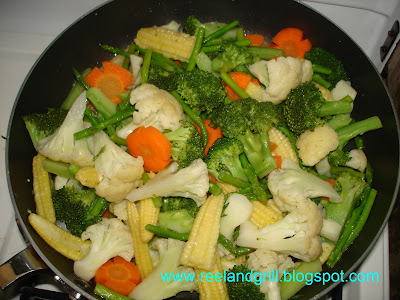 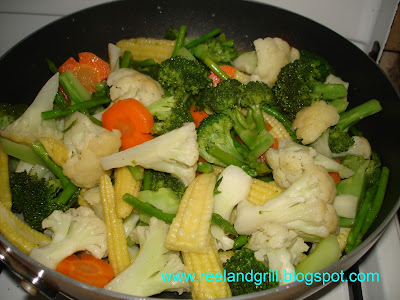 Make individual servings. In a wide serving plate arrange some of the steamed veggies then place a single serving of the cooked short ribs. Serve as main meal, on its own or with steamed rice or bread of your choice. 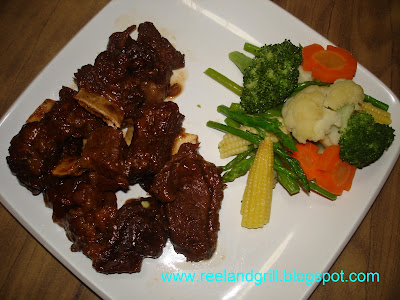 The dish is also perfect as an appetizer or “pulutan” over some beverages. This is so delicious! Enjoy! c“,) 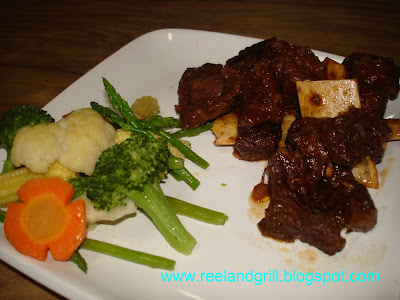