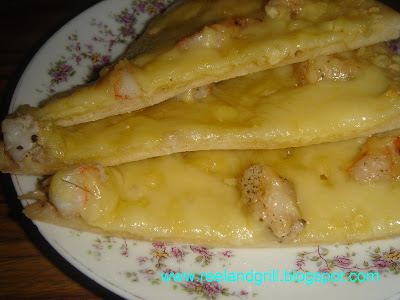 Pizza is a world-popular dish made with an oven-baked, flat, generally round bread that is often covered with tomatoes or a tomato-based sauce and cheese. Other toppings are added according to region, culture, or personal preference. In restaurants, like the one in Bentota Beach Resort which I posted before, pizza can be baked in an oven with stone bricks above the heat source, an electric deck oven, a conveyor belt oven or, in the case of more expensive restaurants, a wood- or coal-fired brick oven. On deck ovens, the pizza can be slid into the oven on a long paddle called a peel and baked directly on the hot bricks or baked on a screen or a round metal grate.

Modern pizza originated in Italy as the Neapolitan pie with tomato. In 1889 cheese was added. According to the original Italian rules, the genuine Neapolitan pizza dough consists of Italian wheat flour, natural Neapolitan yeast or brewer's yeast, salt and water. For proper results, strong flour with high protein content (bread flour than cake flour) must be used. The dough must be kneaded by hand or with a low-speed mixer. After the rising process, the dough must be formed by hand without the help of a rolling pin or other mechanical device, and may be no more than 3 mm (1/8 inch) thick. The pizza must be baked for 60–90 seconds in a 485 °C (905 °F) stone oven with an oak-wood fire.

This process might be different to yours or mine in some ways, but it does not matter. The important thing is that we create a sumptuous pizza our own way. 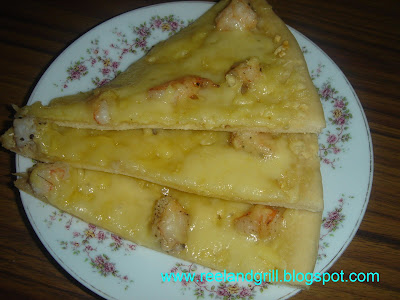 The bottom base of the pizza, called the "crust" in the United States and Canada, may vary widely according to style. It could be thin as in hand-tossed pizza or Roman pizza or thick as in pan pizza or Chicago-style pizza. It is traditionally plain, but may also be seasoned with butter, garlic, or herbs, or stuffed with cheese or recently, sausage. When making pizza at home, it can be baked on a pizza stone or baking stone in a regular oven to imitate the effect of a brick oven.
Recently, I posted how I make my pizza crust or shell. Earlier before, I also have a post about how I make my chunky home-made pizza sauce. But for today’s pizza, I decided to prepare one that is not using tomato or tomato based sauce. I call it shrimp garlic pizza which I developed trying to re-create the pizza gamberetti I usually eat at an Italian restaurant here in Sri Lanka which serves really delicious pizzas.

The ingredients for this pizza are: 1 pc prepared pizza crust from my recent post, about 8 pcs shrimps, shelled, about 8 gloves garlic, some Gouda and mozzarella cheeses, salt, freshly ground pepper and extra virgin olive oil (even just good olive oil will do). 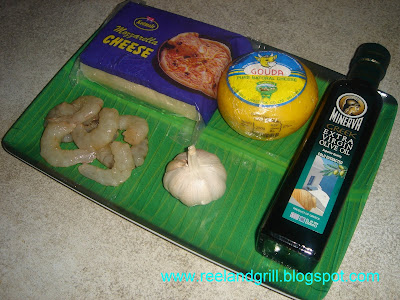 To prepare, first, chopped your shelled shrimps and seasoned with salt and pepper. Crush, peel and mince the garlic. Grate about 1 cup of Gouda cheese and about 1½ cups mozzarella cheese. 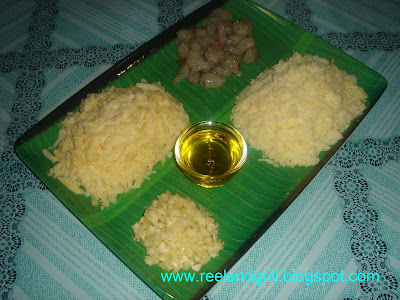 Preheat your oven to 200 degrees Celsius (°C) or 392 degrees Fahrenheit (°F). Spread about 1 tbsp of olive oil to the crust (more if your crust is bigger), then top with the garlic evenly. Spread the shrimp pieces followed by the grated Gouda cheese. 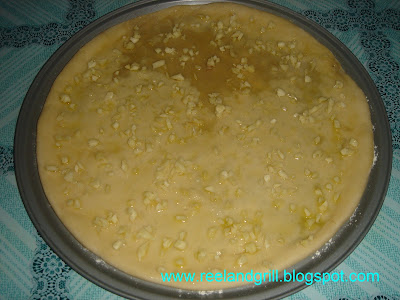 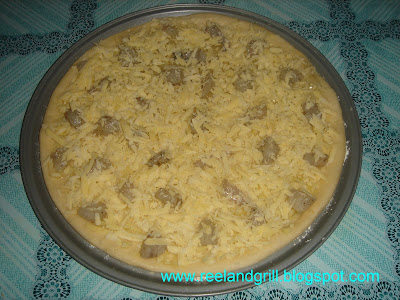 Put this inside the oven and bake for 20 minutes. After which you will have this. 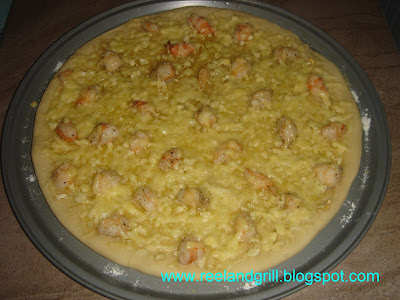 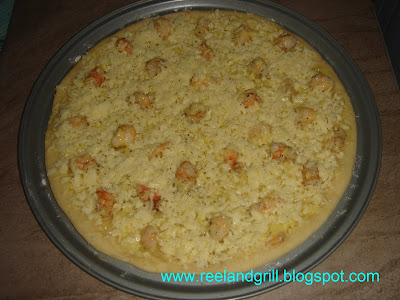 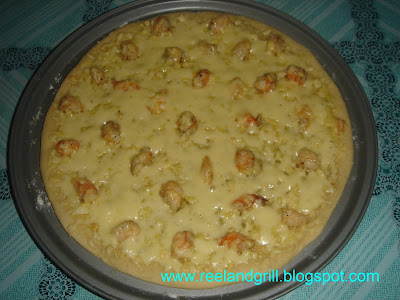 Grab a bottle of your favorite drinks and be ready to be delighted with this distinctly delicious pizza. The combination of shrimps and garlic plus the combination of Gouda and mozzarella cheeses, creates a very unique taste that really works for me. Try it and enjoy! c“,) 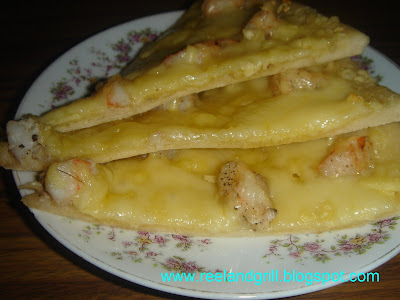