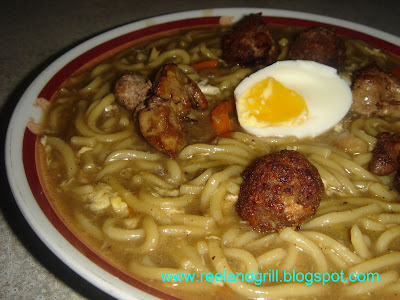 This is the real thing. OK..OK…..let me rephrase it....this is the closer you can get to the real “loming lipa” and to some extent to the famous “loming Ma Mun Luk” where it has a big resemblance. The said two styles of cooking “pancit lomi” are probably the best I have tasted. After regularly being exposed to and had actually eaten bowls and bowls of “loming lipa”, in Lipa City, Batangas (Philippines) and neighboring cities and municipalities, I developed a fascination with the rather simple and ordinary noodle dish particularly the way it is prepared a la “loming lipa”. Since then, it has been my long term objective to learn cooking the sticky and yummy noodle soup right in the comfort of my own little kitchen which I successfully achieved some years back.

As a backgrounder, “pancit lomi” or simply “lomi” is a Chinese-Filipino noodle dish made with a thick variety of fresh egg noodles of about 5 mm or half a centimeter in diameter (probably the biggest fresh egg noodles available in the Philippine market) sautéed with small pieces of pork or chicken meat, liver and select vegetables, added with tasty broth and then thickened by cassava flour and beaten eggs. Several toppings are added prior to serving such as fried “kikiam” (que kiam), as I mentioned in my previous post, meat balls, pork liver and slices of hard boil eggs. 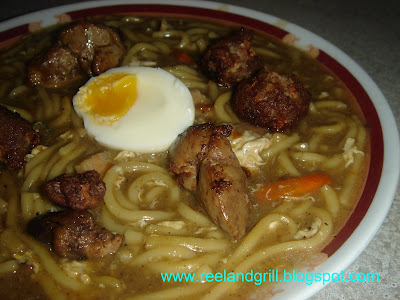 Different regions and/or provinces of the Philippines have varied ways of cooking the dish especially in the use of vegetables. My personal favorite, “loming lipa”, surprisingly, only uses garlic and onion for its vegetable ingredients. No other green leafy veggies, whatsoever. :-)

The method became so popular in Lipa City, Batangas that led to its eventual spread to other towns, cities and nearby provinces of Quezon and Laguna. It commands a wide range of following even to non-“Batanguenos” (people of Batangas). Due to high demand, many eateries and restaurants called “lomian” or “lomi house” or “panciteria” immediately mushroomed in many areas. This resulted in numerous styles of cooking the dish where variations in both recipes and qualities became common.

While the dish calls for a large variety of fresh egg noodles, the best that I can find here in my place of residence is only of the medium-sized kind. This is the same type I used in cooking “Easy Pancit Miki” before. Therefore, just to be able to prepare the dish, I have to settle with what is available. One pack of about 500 grams fresh noodles is sufficient. 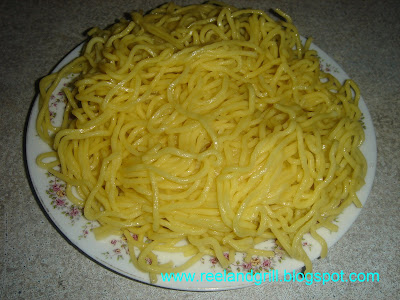 The other major ingredients are fried “kikiam or que kiam”, which I prepared and posted recently, boiled pork for sautéing and boiled chicken liver in lieu of pork liver which is likewise hard to find here. Some hard boiled egg will also be needed as additional toppings. 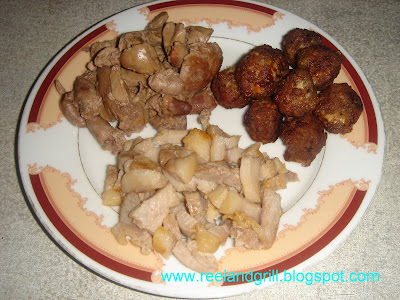 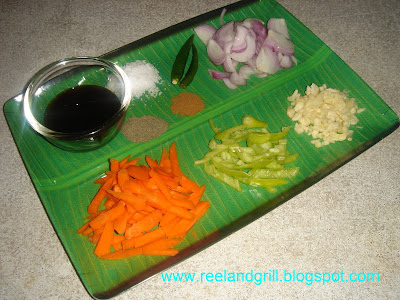 In a large pan or wok, heat about 2 tbsp of vegetable oil then stir fry the pork meat until slightly brown. Take out the pork and set aside. In the same pan and oil, stir fry the chicken liver with heart until light brown as well. Set aside. 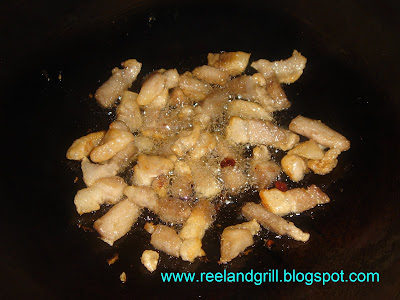 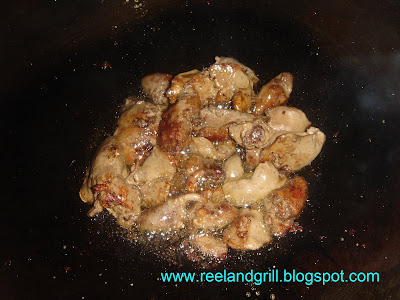 Using the same pan with oil, fry garlic until aromatic followed by the onion. When the onion is translucent, add carrots and chili peppers and continue sautéing. When the veggies are cooked through add salt and ground pepper followed by soy sauce. Continue sautéing until its sizzling away. 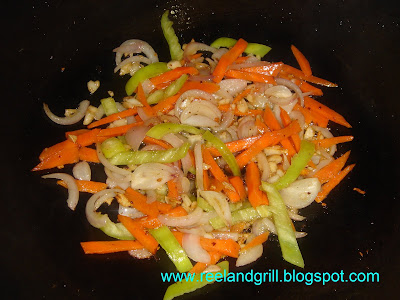 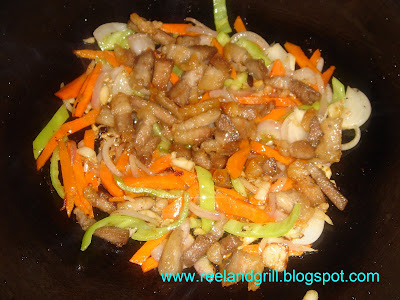 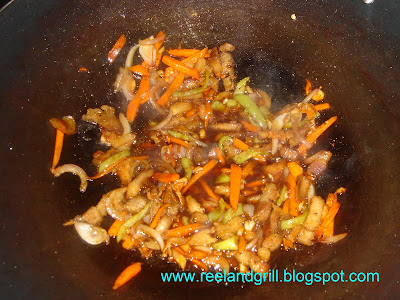 Wash the fresh egg noodles thoroughly to remove excess oil and salt. Add it into the pan and fry with the vegetables. Add the broth and let it boil with lid on. Continue cooking until the noodle is cooked through. Taste the broth and adjust the seasonings. Then add the secret ingredient called “kikiam” powder or “goyong” powder. Don’t tell anyone. Stir and let it boil further for a minute or two. 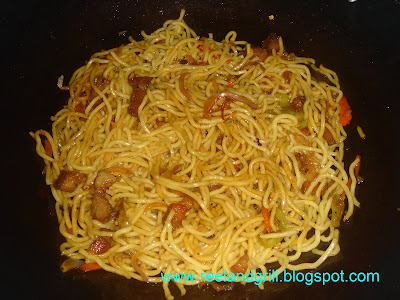 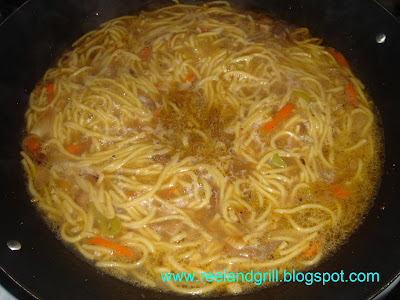 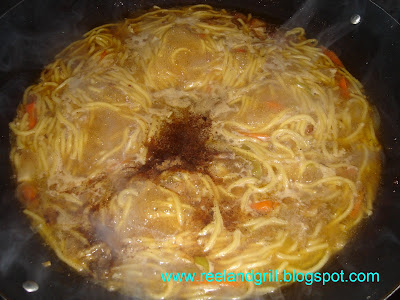 Meanwhile, prepare the thickening agent of about 3 tbsp cassava flour (another secret ingredient) and 1 fresh egg. The egg should be lightly beaten and the cassava flour should be dispersed in a small amount of water. 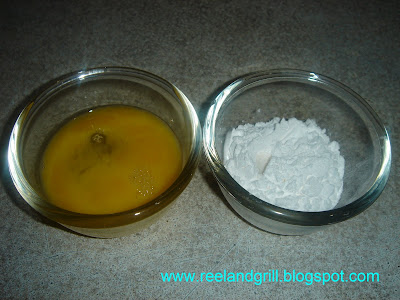 Slowly add the flour mixture into the pan. Stir lightly to properly mix everything. Then add the chopped hot chilies. When the sauce has thickened, turn off the heat and slowly add the beaten eggs while stirring lightly to finish off the dish. 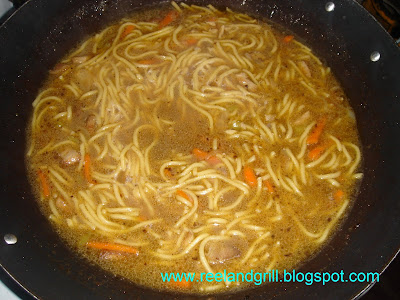 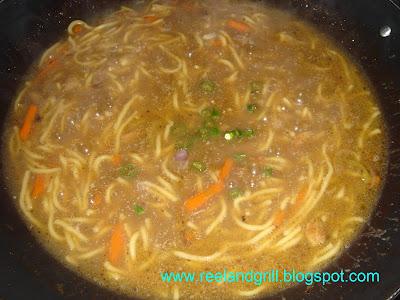 Transfer in serving bowls and top with slices of hard boiled eggs, fried chicken liver and fried “kikiam” balls. Minced green onions and toasted garlic make great toppings as well. A dipping sauce made of soy sauce, “calamansi” or lemon extract and chopped bird’s eye chilies will make every spoonful even more wonderful and soothing to your inner sanctum. :-) 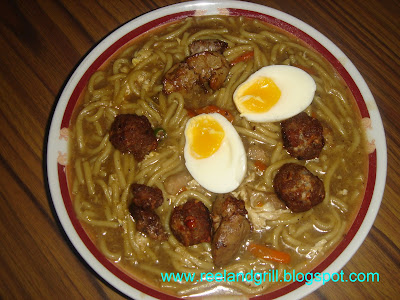 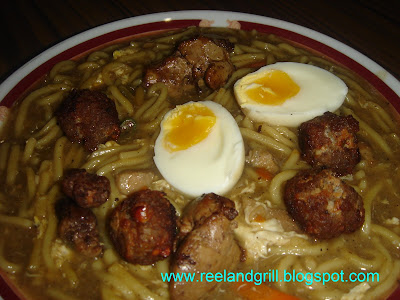