Shore Fishing at the Playground in Sri Lanka Continues 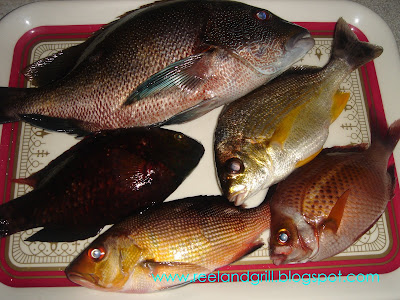 As the monsoon season is now fast approaching, the productive fishing spot in Bonnavista, Galle City in southern Sri Lanka which I considered as my Playground will inevitably be unfishable soon. The rainy season is expected to bring lots of water and gusty winds which will create raging sea waves which will continuously pound the said Playground all throughout the monsoon period. As a result, my ultimate passion of shore fishing will simply be not possible due to safety consideration. While there will still be days of moderately favorable fishing condition, constraints on my schedule might not provide the opportunity.

The monsoon season, which usually last for about 4 months, would be quite a long wait for an avid angler that I am. Whilst there are other inland bodies of water that could provide an alternative freshwater fishing adventures, the Playground is always my preferred place due to its still unexplored possibilities. The abundance of big game fish and other delectable schooling fish, just within reach from the shoreline provides shore casting opportunities unparalleled elsewhere. This has been mentioned in my previous adventures in the area here and here. 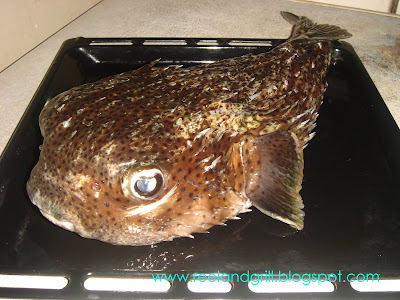 Given such a thinning prospects due to weather change, I decided to round the Playground over the weekend. I brought my ever reliable frozen dead bait of shrimps and squids along with my line of artificial lures. However, as I come closer to the area, I instructed the driver to make an abrupt detour towards the thick mangrove area to try finding local fishermen who might be willing to sell their live shrimps catch for me to use as bait. I was thinking the big fish might be enticed to bite if offered with live shrimps.

I reached the vast mangrove area still at a very early time of 6:00 am. I found two fishermen casting fine net on the packets of water within the mangrove reservations. I was quite lucky that one has already caught about 20 pieces of small shrimps or “swahe”. He happily offered me the shrimp for 100 rupees or about 85 cents. I immediately placed the live shrimps in a plastic container, put the lid on and stocked it inside the cooler. I asked the driver to immediately proceed to the Playground. I was full of hope as I left the mangrove area. 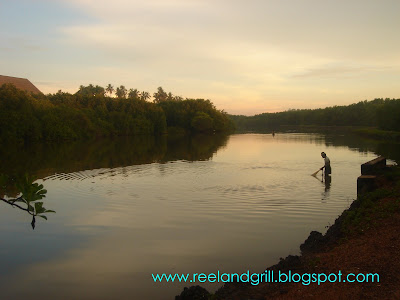 Upon reaching the place, I noticed that the waves were starting to get rough but shore fishing was still possible. I set up the gears along with the modified gaff with about 2 meters length handle. This will enable us to reach the fish from the water surface about 3 meters below the rock platform which during wave becomes only about 2 meters. We immediately occupied that familiar rock of joy which at that particular moment was very wet. 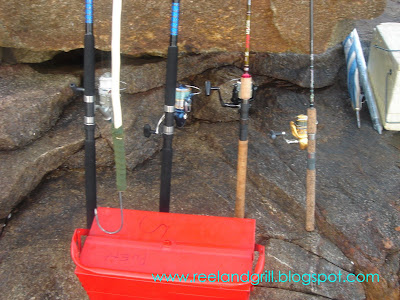 I eagerly brought out the live shrimp only to realize that I made a major blunder of putting them in a container with tight lid on. They were almost dead. I tried to revive them by pouring some water but it made very little help. Nonetheless, without losing hope, we immediately baited our hooks and casted to the crystal blue water. The fresh shrimp was a hit. After only a few seconds my driver caught the first fish of the day. It was probably a wrasse of about 500 grams. 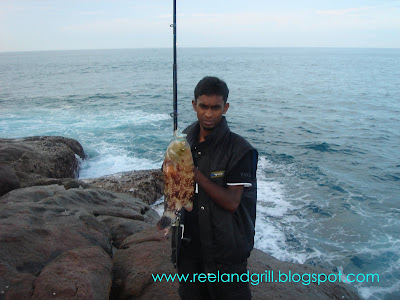 I continued fishing in the hope that I might get some biggies. As prayed, a massive pull was felt from my rod. The adrenaline kicked in and the excitement rolled. I could judge that from the strength of the fish, it could be a lot bigger than the driver’s catch. The fight was short though and I soon saw the massive fish at the end of my line. With a careful lift and smooth swing, I was able to land it. It is a wide 2-kilogram fish which from the look was probably an emperor or snapper. 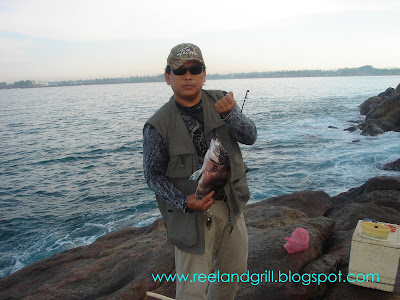 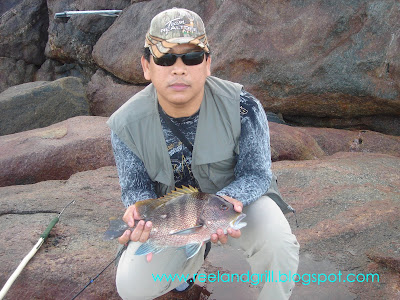 What ensued was a really fun shore fishing activity. The almost dying shrimp got a lot of attention from the fish and several more 500-gram fish were easily hooked and landed. I was busy reeling another fish when all of a sudden a huge wave came rushing towards us swiping the rock area we were in. It was not strong enough though to take us but sufficient to topple the cooler and spread all its contents across the rocks. I urgently reeled and landed the fish I just hooked and joined the driver busy salvaging our catch, drinks, food, dead bait, pliers, scissors, etc. from the water in between rocks. Most of the catch especially the big one were retrieved. 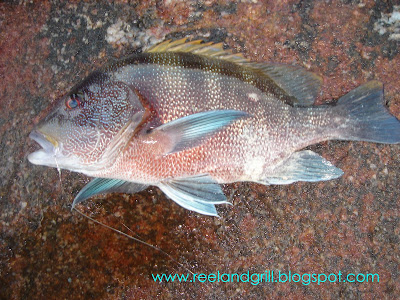 However the live shrimps were not found. While it has been a very funny scene, we were saddened lossing the remaining fresh shrimps which were proven to be very effective bait in the Playground.

We continued our fishing using chunks of the frozen bigger shrimp and squid as bait. I know it will not be as alluring as the fresh and slightly live shrimps but it will still be good for fishing nonetheless. As expected the pace of biting made a dramatic change. I asked the driver to try looking in the between rocks if he could still find some of the washed away fresh shrimp. He diligently scoured every voids and water below it and luckily he found about 3 more shrimps. All clearly dead but could still attract predatory fish.

We continued casting with the 3 shrimps. On my last bait, I got a pretty strong but familiar pull. The rod bent heavily. 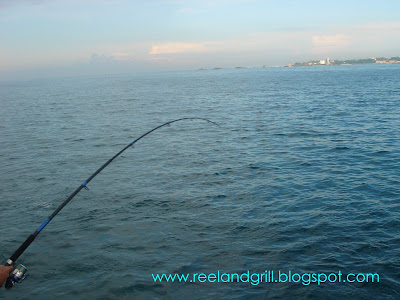 The fish was not aggressive but very heavy. I thought it could be the same burrfish we hooked and lost several times. I was correct. The massive fish took my last fresh shrimp. I slowly reeled him up the water and that same porcupine looking fish emerged. It might have outsmarted us twice before and I will not let that happen again.

I asked the driver to get the special gaff and waited for the wave to bring the water level 1 meter higher and presto, the stubborn fish was safely gaffed for sure landing. The modified gaff paid off. The massive burrfish or percupine fish was landed. After the excitement of finally landing the about 5 kilograms burrfish or “tugatungan” as called by Rene and Alex, friends from Samar and Bohol (Philipines), I sensed I will be having a little problem. I don’t know how to clean and prepare the odd looking fish and Rene was on a special assignment in another place. My only option is to freeze the fish and wait for Rene.

While Rene and Alex swear that this fish is edible and in fact very delicious, I have not known that. What I and locals here knew, is that the fish is poisonous. :-) We could be wrong of course. Can this be safely eaten? You tell me. :-) 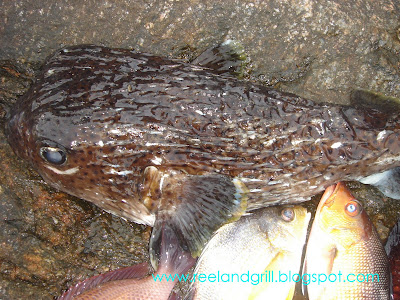 But the other takes were sure delicious and safe. While Rene will probably have the first bite of the “tugatungan”, I am willing to follow through after we are sure that nothing wrong has happened to him. :-) Likewise, I will be willing to take my first bite on the other mixed bag of predatory fish. 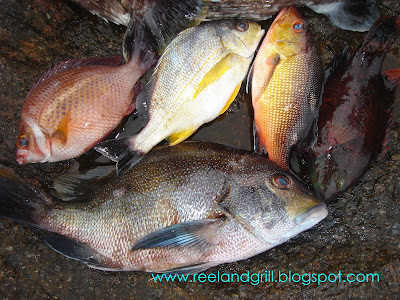 That day’s fishing can be described as fun, productive, outrageous, hilarious, fulfilling and satisfactory. It was indeed a wonderful time spending the weekend. That short period of 7:00 to 10:30 am was enough to consider the day a very worthwhile experience. And yes, I want to come back next Sunday. For all I know, due to the fast changing weather, the succeeding Sundays will not be as fun and productive anymore. c“,) 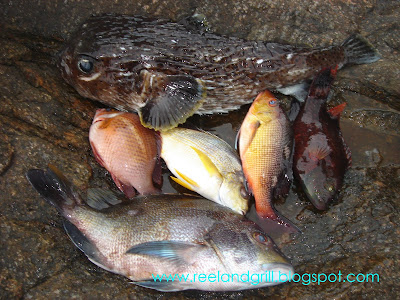