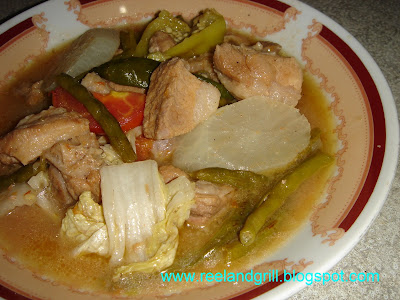 I may not like “sinigang” as much as my friends and colleagues do but since it is among the favorite foods of the majority in our group and part of the every day meal being served to us, I have already developed a moderate liking to the popular Filipino soupy dish. Probably, my constant exposure to the dish, transmit a radiation-like effect, which over prolonged time, has caused my taste buds to mutate and caused positive genetic alteration which eventually led to adapting itself to the sourly-salty taste of the vegetable laden stew dish.

Okay, okay, it simply means I have underestimated the culinary significance of the dish which appealed to almost all members of our group except me and one from the Visayan (Philippines) region where “tola or tinola” dishes are the ones cool and not “sinigang”.

Though I am not overwhelmingly enjoying the dish, I, on several occasions have also prepared it for the pleasure of our group like in “sinigang na baka” and “sinigang na tuna” posts. When one mention only the generic term “sinigang”, it basically refers to pork “sinigang” or “sinigang na baboy”. It is probably the most common variation which wide range covers meat, poultry, fish, shrimps, sea shells, etc. While I am biased to seafood “sinigang” especially shrimp, I have cooked pork the most number of times. 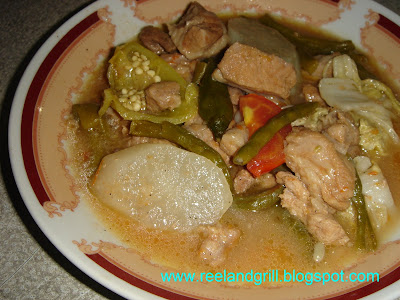 “Sinigang” is basically pork stew in tamarind. Since processing fresh tamarind is quit laborious, most Filipinos depend on the inexpensive, handy and readily available pre-mix products which taste like the real thing with added varieties of flavors like taro, “calamondin” or “miso”, to name a few. For pork “sinigang”, taro flavored “sinigang mix” is always prepared.

To cook the dish about 1½ kilogram pork is needed. The prepared cuts in the Philippines are the tail section with a huge bone and thick layers of fat and meat or the belly cut called “liempo”. But since we only have cube pork and leg slices available, I preferred the former which offer a tender and leaner meat.

In addition to the pork, the other ingredients to compose the first set are: 3 plum tomatoes, chopped, 1 medium onion, peeled and chopped, ½ tsp ground pepper and 1 tsp salt. 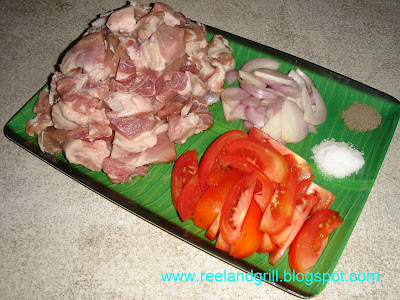 In a pan or mixing bowl mashed the tomatoes and onion. Add in the pork and thoroughly combine the mashed vegetables and the meat. Add in salt and ground pepper and stir to evenly blend.

In a large wok of thick casserole, place the meat-tomato mixture and cook in medium heat. Don’t add any water as the meat and veggies will render their own liquids as they are heated through. 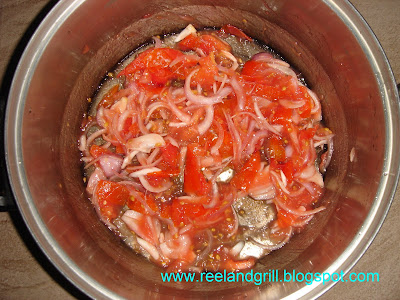 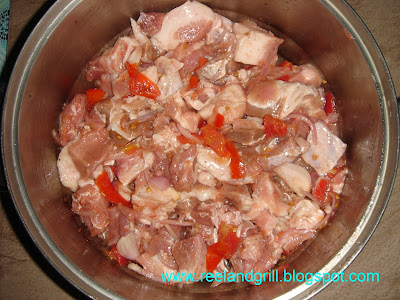 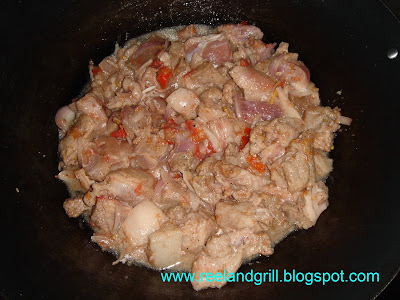 In the meantime prepare the vegetables ingredients of your choice, like tarot, Chinese cabbage, “bok choy”, white radish. “daikon”, eggplant, green beans, okra, swamp cabbage or “kang kong”, etc. But this time what I have are Chinese cabbage, cut to large pieces, 1 medium “daikon”, peeled and diagonally cut up, 1 bunch string beans, trimmed and cut to 2 inches length, 1 pc tomato, cut up to wedges, green pepper, diagonally cut to 3 pieces and 3 finger chilies, kept whole. Some salt and ground pepper might still be needed to taste. 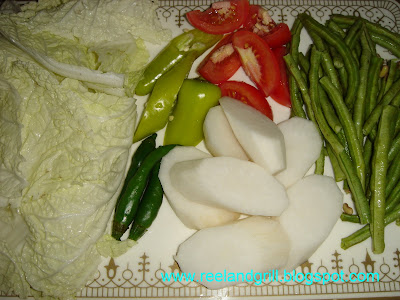 Continue cooking with occasional stirring until the tomatoes and onion are very soft and have literally disintegrated and the liquid is reduced. 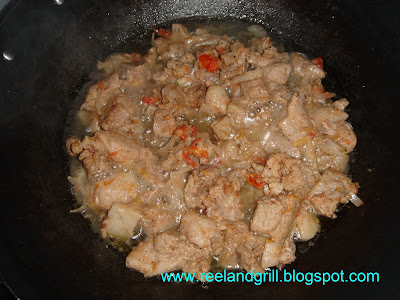 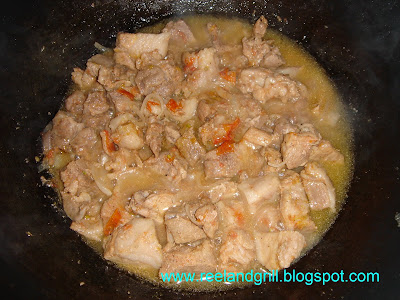 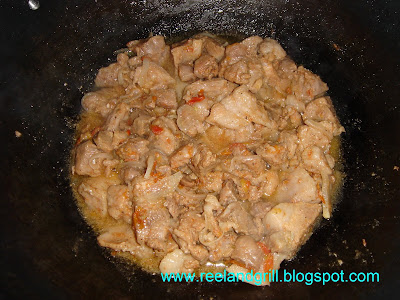 As mentioned in my “sinigang na baka” post, many consider that the secret to tasty “sinigang” is the use of rice washing instead of broth. So for this dish, I set aside about 7 cups of rice washing when I prepared the steamed rice now whistling on rice cooker. Add enough of the rice washing to cover the meat and continue simmering on a very low heat until the meat is fork tender. Gradually add some more rice washing as required, maintaining the desired level of soup. 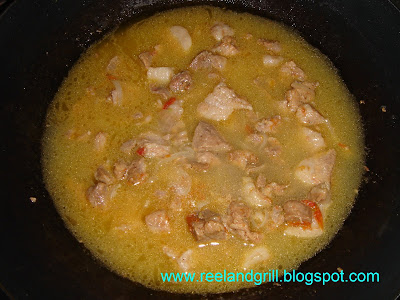 When the meat is fork tender, add the vegetables in groups with several minutes interval. String beans, finger chilies and “daikon” first, followed by green pepper and tomato when they are half cooked. Adjust the seasoning and finally add in cabbage. 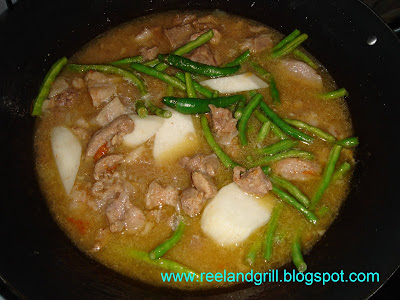 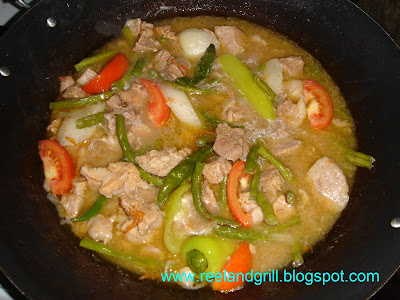 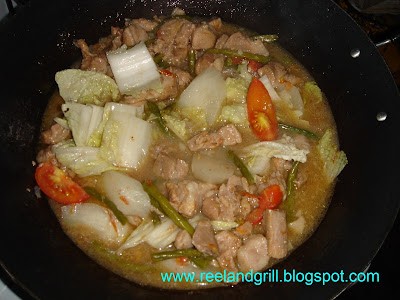 When the veggies are almost done, it’s time for the “sinigang mix” flavored with taro roots. In a small mixing bowl, disperse the “sinigang mix” powder in ½ cup of water until it is evenly dissolved. Add the mixture into the dish and cook for several minutes more with the lid on. 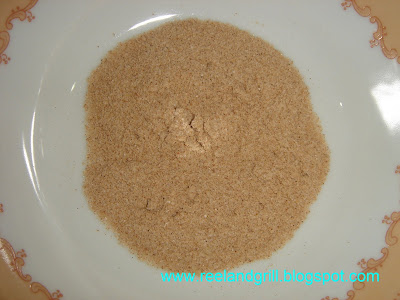 When the soup is again boiling, taste and when you’re happy with the sourly-spicy kicking taste, it’s done. Transfer in wide bowls and serve piping hot. :-) 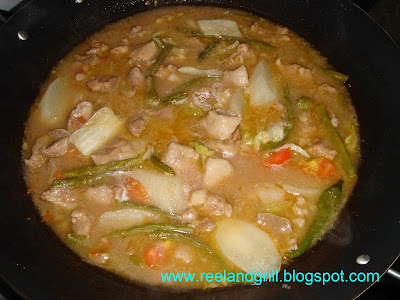 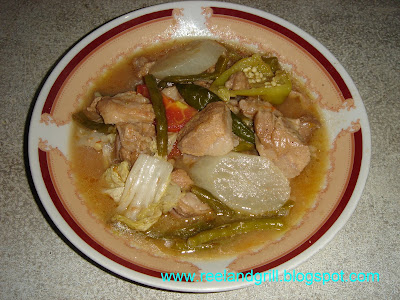 For me to really like “sinigang”, the soup should not be overly sour. Hence, the use of only 1 pack of tamarind “sinigang mix”. This way, it’s tasty and pleasantly comforting. A dipping sauce of fish sauce + “calamansi” + chilies will provide even more kick. Just make sure to serve it with lots of steamed rice. Enjoy! c“,) 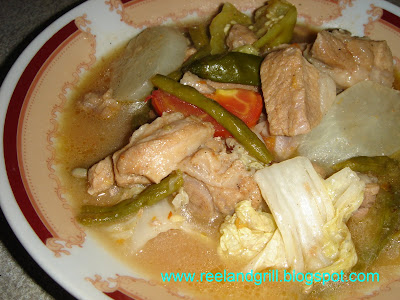