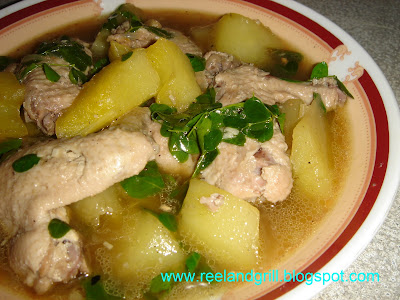 It has been raining hard for several days. The rivers and streams are swollen. The marshes, grasslands and green fields are inundated with water. The surroundings are dripping wet. The forest canopy is shrouded with mist. The air is overwhelmed with cool wind. Thick clouds abound, shielding the warm sunrays from reaching the land. The atmosphere is cooler by about 4 degrees centigrade. Yes, it’s cold in here! …… and we need a piping hot chicken soup. But since we are Filipinos, the last phrase simply means we want some “tinola” or chicken stewed in ginger. For lunch or dinner, it doesn’t matter. Just serve it fast with a rice platter.

Chicken soup is a classic comfort food that is believed to have healing properties for common colds and flu. It is a soup made by boiling and simmering chicken parts and/or bones in water and added with various vegetables and flavorings. It is typically served consisting of a clear broth with small pieces of chicken or vegetables or with noodles or dumplings. The Philippines’ answer to this classic feel-good soup is its “tinolang manok” or simply “tinola”. A soupy chicken stewed dish flavored with ginger and added with green papaya and chili leaves. The rejuvenating flavor of ginger and the slight kick and peppery flavor of chili leaves make Filipino “tinola” an even better chicken soup alternative……..at least for me.

The dish, regarded as the Filipino chicken soup, is widely accepted among all sectors of the society because it is quite inexpensive, could well satisfy a rather big family or group of diners and can be quickly and easily prepared. While it is believed to have been first invented in the 1800s using the delectable native chicken and referenced in the famous “Noli Me Tangere” novel of Dr. Jose Rizal, it remains extremely popular today. It has withstood the test of time and is continuously evolving. Exciting variants using pork, edible frog, fish and shellfish are regularly seen. In the Visayan Islands of the southern region of the Philippines, there is a version called “binakol” which uniquely includes flesh of tender coconut and coconut water to the dish. 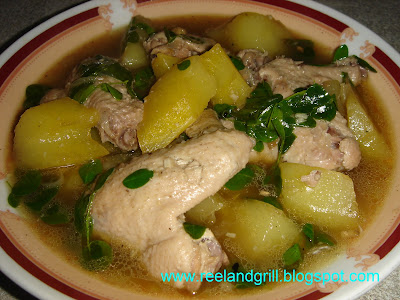 Cooking “tinola” is actually fool-proof and quite easy. Just fry ginger, garlic and onions in a small amount of oil then seasoned with fish sauce. Add in cut up chicken and continue sautéing until the meat pieces basically sizzles in oil. Add in chicken broth or just hot water followed by the sliced papaya and simmer until everything is tender. To complete the dish, add in some chili leaves or as a healthier substitute, “malungay” or horseradish leaves (“moringa”) and simmer for another minute.

While I would love to prepare this using the meat of a free range young native chicken as enjoyed in our provinces of Quezon and Batangas (Philippines), city life has long limited our access to only farm-raised chicken meat. Consequently, what I have right now are several pieces of chicken wings, about 800 grams or about 2 lbs. 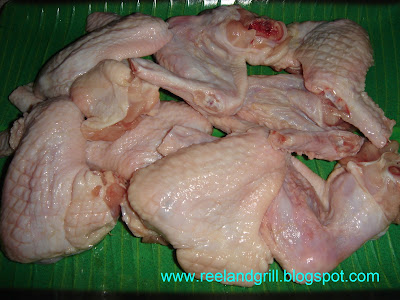 The other major ingredients needed here are: 1 medium green papaya peeled and sliced to small sizes and some young leaves of horseradish or “malungay”. 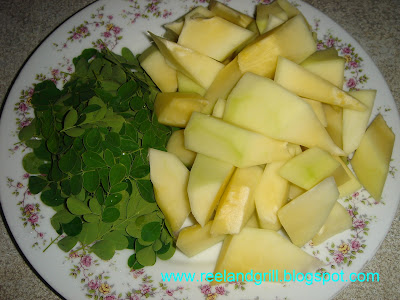 The rest of the ingredients are as follows: 1 thumb-sized ginger, peeled and cut to strips, 8 gloves garlic, peeled and minced, 1 large onion or 2 small onions, peeled and chopped, 2 tbsp fish sauce or “patis”, ½ tsp ground pepper, 1 tsp salt or taste and 1 chicken bouillon (optional). Additionally, we need about 2 tbsp vegetable oil for sautéing and about 4 cups or enough amount of broth or hot water to cover. 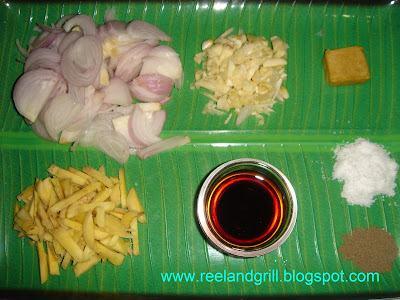 In a large pan or thick casserole, heat the oil on medium flame. Fry ginger followed by garlic until slightly browned. Add in onions and continue frying until translucent. Add the fish sauce and continue sautéing until fragrant. Add in chicken pieces and cook until it renders liquid and oil. Increase the heat, continue cooking with regular stirring until the liquid is reduced and the meat is basically sizzling in oil. 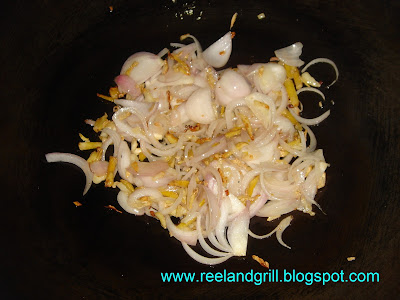 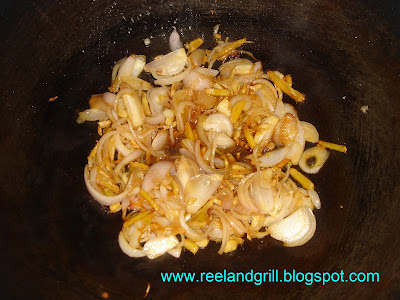 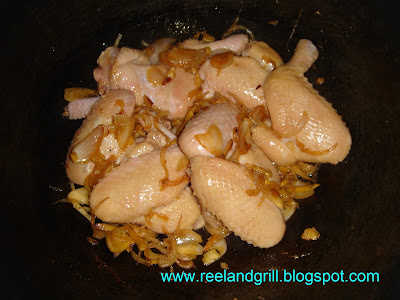 Pour enough broth or hot water to cover and add in the chicken cube, if using. Continue simmering until the meat is just tender. Season it with salt and pepper. 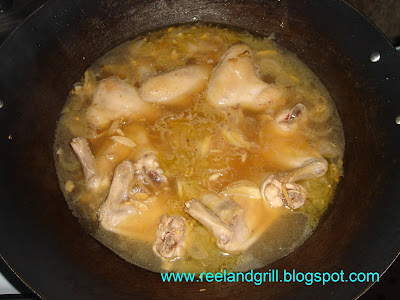 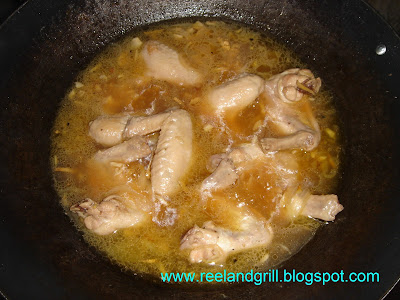 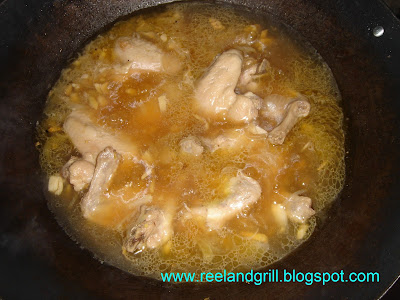 Add the papaya and simmer further until it is cooked through and the meat fork tender. Adjust the seasoning and level of broth according to your preference. Finally, add in horseradish leaves, put the lid on and turn the heat off. It should be ready after a minute or two. 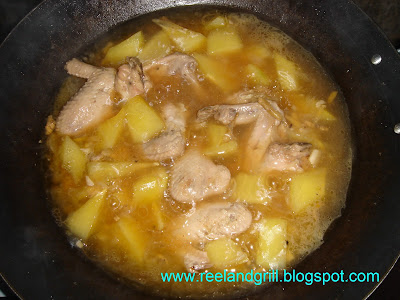 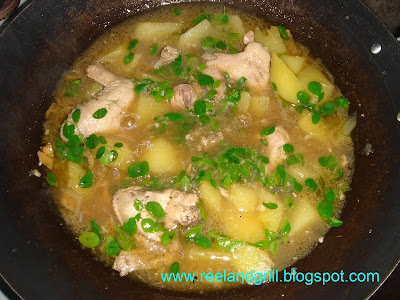 Transfer into medium bowls and serve piping hot with lots of steamed rice. It is best accompanied by a complementary “patis” + chili dipping sauce. 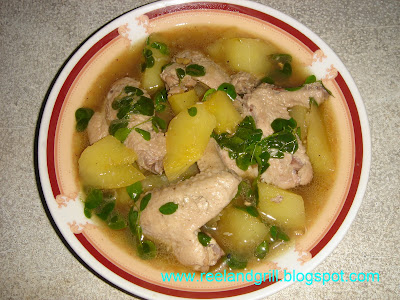 Savor the aroma and taste of this fulfilling dish. Be lightened up by its perceived healing and invigorating power. While enjoying the dish, we have appreciated the cool breeze brought about by the heavy rain outside. :-) 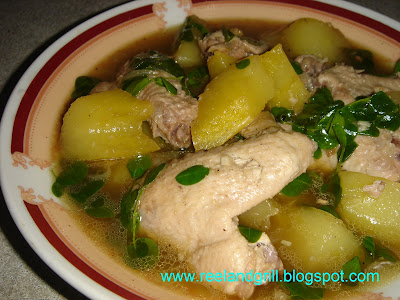 Like “adobo” and “sinigang”, “tinola” is another authentic Filipino dish that we can be truly proud of. It is considered an important part of our distinct cuisine and at the same time a food tradition continuously being passed on for many generations. Enjoy! c”,) 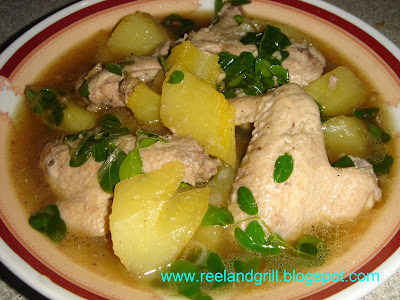