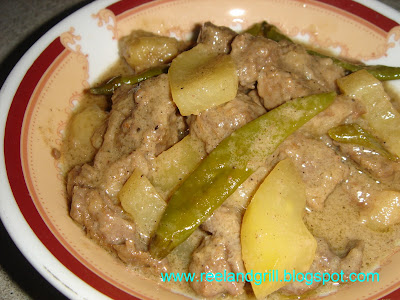 After the successful “ginataang manok” by Lalaine, I thought of cooking another “ginataan” (cooked in coconut milk) meat dish which I once prepared long time ago. My last encounter with the dish is when I ate it at a popular “turo-turo” or roadside eatery somewhere along the thickly vegetated and forested highway in the beautiful province of Laguna in the Philippines. I am referring to the quite exotic dish called “ginataang kalabaw” which translates to carabeef cooked in coconut milk in English.

The carabao is generally considered by most Filipinos to be the national animal although not officially supported by a law or decrees, which is required to be recognized as a national symbol. It has have been domesticated in the Philippines as far back as pre-Hispanic times and is often used by farmers to plow the fields and as a means of transportation. It is one of the most important animals of the country, especially in agriculture. Just like cow, it is also a good source of nutritious milk and may be slaughtered for its meat and hide. 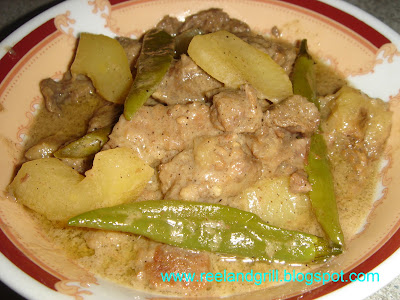 Carabeef is the term use when referring to the meat of the carabao as well as the meat of the domestic Asian water buffalo. While it is widely eaten in many parts of the Philippines and here in Sri Lanka, it is moderately used as a delicacy worldwide. The ongoing preservation efforts and strict government regulations are probably among the reasons for this.

Since I am here in Sri Lanka, the carabeef that I will be using in this recipe actually came from Asian water buffalo and not from the sub-species carabao. Honestly though, I don’t see any difference.

To cook the dish, we need about 1 kilogram or about 2.2 lbs carabeef, cut up to serving sizes, preferably across the grains. Wash the meat several times to remove traces of blood and then drain it thoroughly. 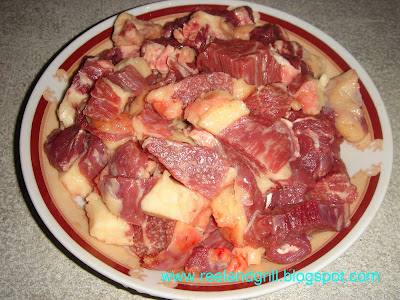 The other ingredients needed are: 6 gloves garlic, peeled and crushed, 3 small onions or 1 large onion, peeled and chopped, 1 tsp peppercorn, cracked or freshly ground, 1 tsp salt or to taste, 3 tbsp white vinegar, 2 tsp white sugar or to taste, and 6 pcs green chilies, 1 chopped (add more if you like a stronger kick) and 5 kept whole. 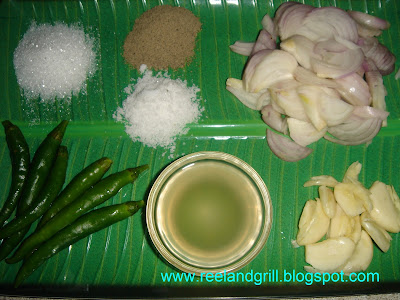 Additionally, we need 1 can or about 500 ml of thick coconut milk, ½ large green papaya, peeled and sliced into strips and about 2 cups broth or hot water for simmering. 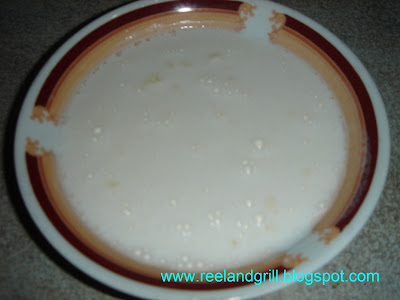 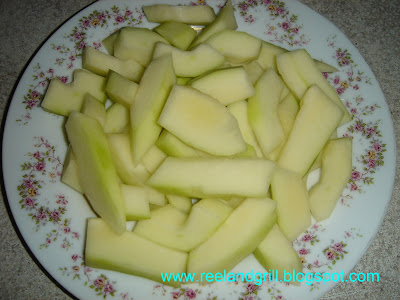 As revealed in the “ginataang manok” recently featured here, the secret to this recipe is to extract fragrant oil from some coconut milk itself prior to sautéing.

In a large wok or pan or heavy bottomed casserole, heat ¼ cup of the coconut milk on low flame. Continue cooking with regular stirring until the coconut milk starts to curdle, releases its own oil (“naglalangis o naglalatik”) and becomes aromatic. When the coconut oil is evident along with the “latik”, add in garlic followed by onion and continue frying the spices on the sizzling oil. 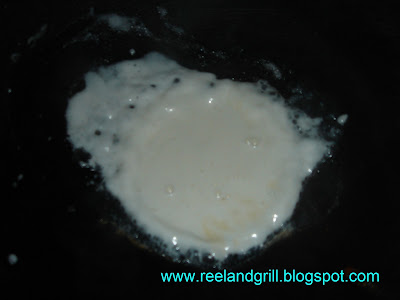 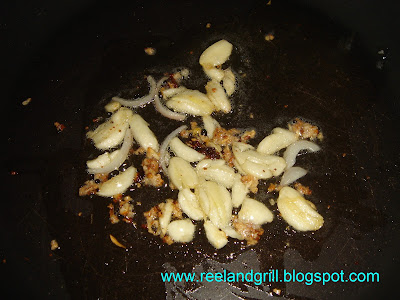 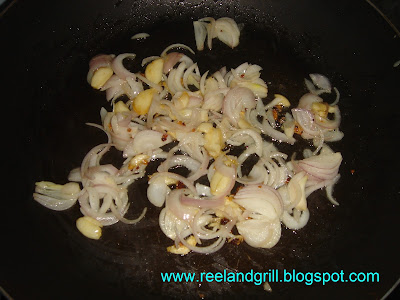 Add in carabeef pieces and continue sautéing until the meat renders its own liquid. Simmer on moderate heat until the liquid is partially reduced and meat is sizzling in its oily liquid. 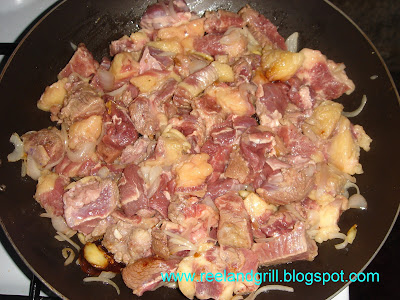 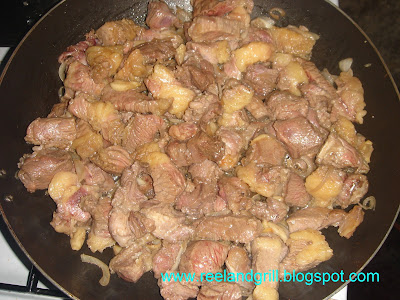 Add enough broth to cover and slowly simmer on low heat until the meat is just tender. During the process, continue adding broth, ½ cup at a time, as necessary. 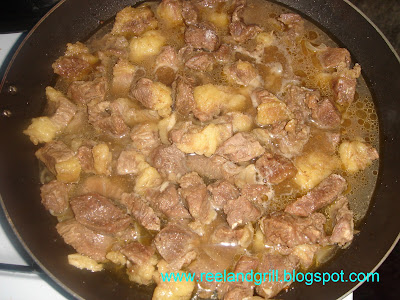 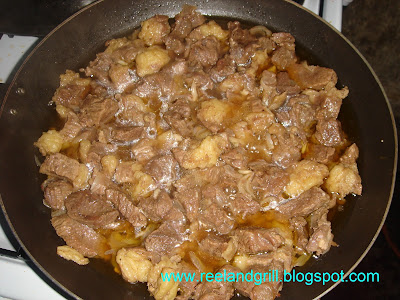 Add in green papaya and continue cooking. When the papaya is cooked through, add in vinegar, sugar and chilies and continue simmering. Season it with ground pepper and salt. 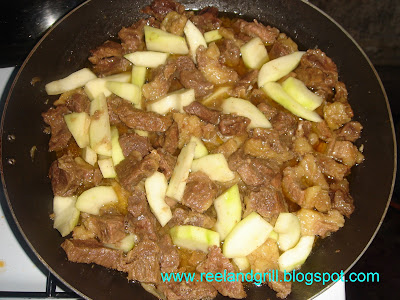 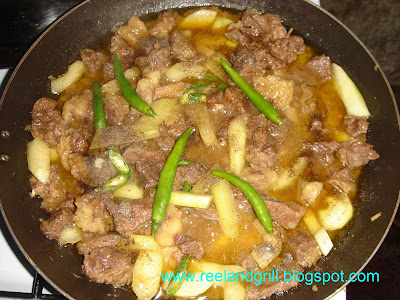 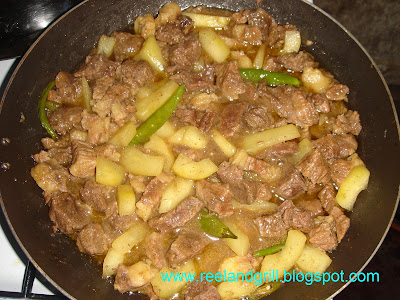 Lower the heat and add the remaining coconut milk and continue simmering with occasional stirring. Keep the lid off to avoid curdling the coconut milk.

Taste and adjust the seasonings. Continue cooking until liquid is reduced and has thickened. Remove some of the oil that will float on the surface if it is excessive. I scooped out about half a cup of oil from the creamy sauce. :-) 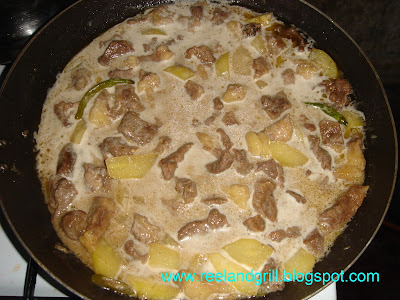 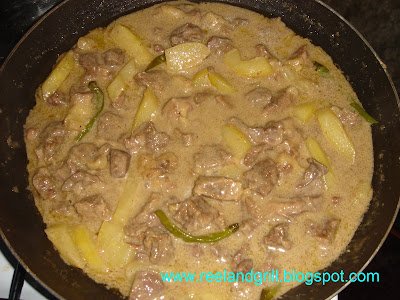 Transfer the dish in serving plates and serve with lots of steamed rice. The dish is rich, utterly delicious and like the “ginataang manok”, perfect with steamed rice. :-) 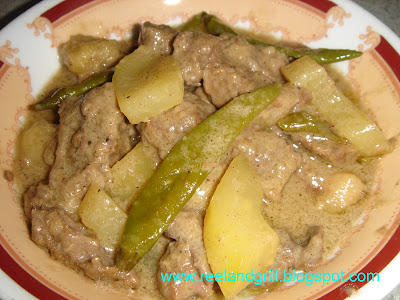 This dish served as our group’s lunch in the office. It is such a very wonderful office lunch. Enjoy! c“,) 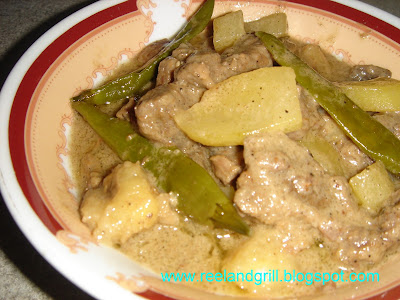