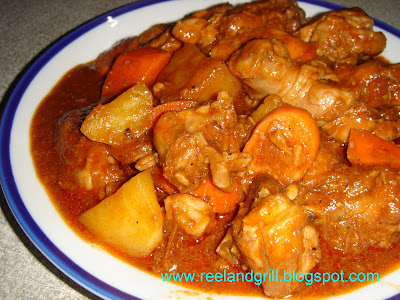 As mentioned several times, “kalderetang baka” or beef stew as called by Filipinos in the West, recently divulged to me as the same dish sometimes referred to as “bakareta” in some parts of the Philippines, is among the signature dishes of this website. Quite evidently, I have prepared and posted the dish twice, here and here. In addition, a similarly popular variant, “kalderetang kambing” or goat meat “caldereta” was also prepared and featured here not too long ago. Simply, it goes without saying that we (me and my colleagues) love “kaldereta” dish so much that like “pork adobo a la Dong”, it has been a regular fare in our weekly menu.

Discussing what to cook the other night, Dong, a colleague and at the same time my “inaanak”, brilliantly suggested I try preparing the usual savory, luscious and moderately spicy “caldereta” using chicken meat in lieu of beef. I immediately welcome the idea which I thought, could well serve as our group’s alternative recipe, for the predominantly chicken dishes (about 60% of our main meals) that we regularly have. Therefore, my version of “kalderetang manok” or chicken sautéed in garlic, lots of onions and spices then stewed in tomato sauce and added with liver spread and cheese was conceived.

Early on, I have a good feeling about the chicken being cooked into “caldereta”. For one, my brother in law on several occasions told me stories about the poor man’s version of the dish that they sometimes cook in the project site using just the cheap chicken feet as the meat. He swears it is so good that they usually ran out of rice during the meal. Well, I find that not really amusing after all. One attributes of a good “caldereta” is the sauce and if you attained a very flavorful sauce, then diners will really consume lots and lots of rice. And if using just the lowly chicken feet could work, then using choice cuts is bound to do even better. 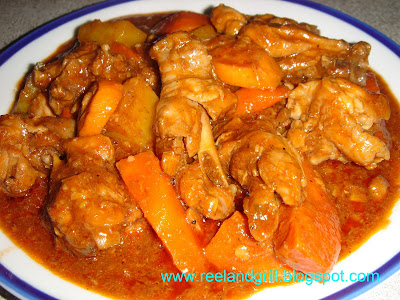 While “caldereta” in its authentic form, is an elaborate preparation involving special ingredients such as green olives, cheddar cheese, pickle relish, liver spread or pounded liver, hotdog, sausages and sometimes mashed baked beans or pork & beans and peanut butter, it could also be prepared using just the basic ingredients. As for me, I also prefer it simple most of the times. I could settle with the version of the dish without green olives, baked beans, peanut butter, cheese and sausages.

Basically, I followed the same procedure in my recent “beef caldereta” post in cooking this variant, except on the marinating step since I felt I need to sauté the chicken with garlic and onion until it sizzles in oil to eliminate the somewhat foul odor and taste associated with chicken.

To cook the dish, we need about 1 kilogram or more than 2 lbs of chicken. You are at liberty to choose your preferred cut or cuts. For me, a combination of drumstick and thigh (my personal favorite) is my best option. The chicken should be cut cup to serving sizes then properly washed and thoroughly drained. 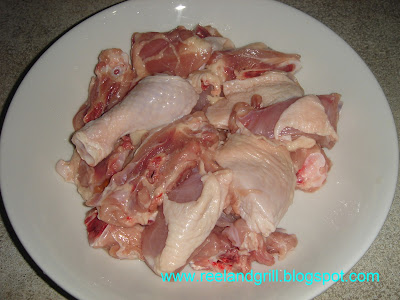 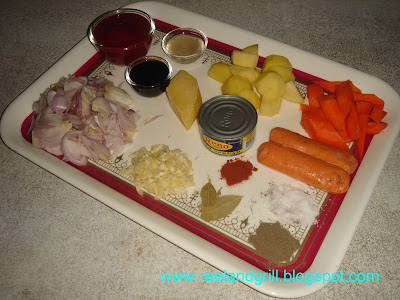 In a heavy pan or wok, heat the oil + margarine and fry the garlic followed by the onions. Continue sautéing until onion is translucent. Carefully add in the chicken pieces on top. Put the lid on and let the meat renders its own liquid and oil as it is heated through. When the liquid is boiling, give it a few stirs to blend the garlic and onion with the meat on top. Continue sautéing until the liquid is basically reduced, only some oil remains and chicken aromatic. 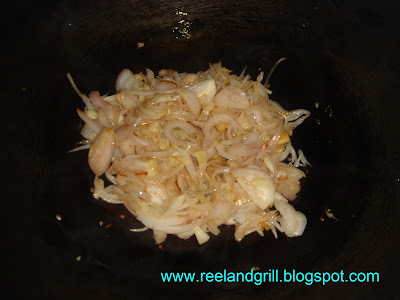 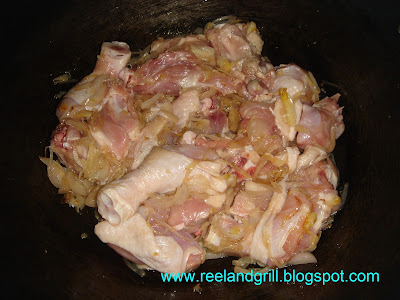 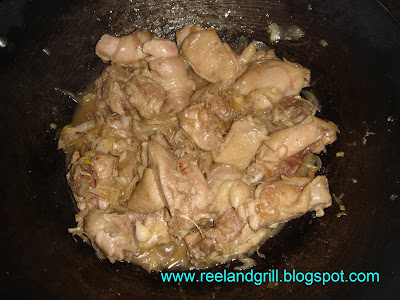 Add the tomato sauce, vinegar, soy sauce, bay leaves, sweet pickle relish, salt, sugar and ground pepper. Lower the heat to the lowest setting possible, with the liquid still gurgling. Put the lid back on and simmer the meat really slowly. If the liquid is drying out, you can add broth or hot water, one half cup at a time. 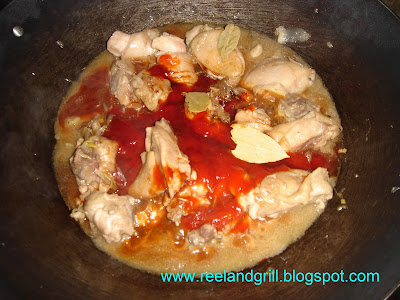 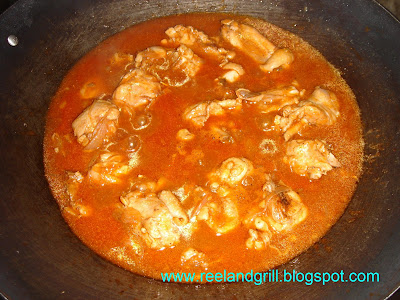 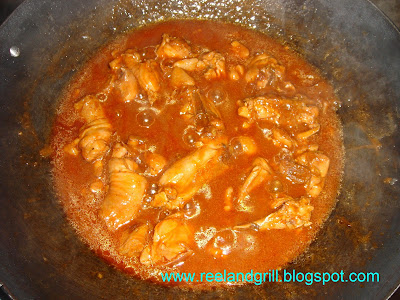 When the chicken is already fork tender, add in potatoes, carrot and sliced hotdog. If you have pitted green olives use several pieces as well. Adjust the levels of sauce and seasoning to your preference and continue stewing until the veggies are cooked through.

Add in bell pepper and simmer further until the sauce is slightly reduced. Add in liver spread and grated cheese combined into paste in about 1/2 cup hot water. Simmer for a couple of minutes more with occasional stirring. 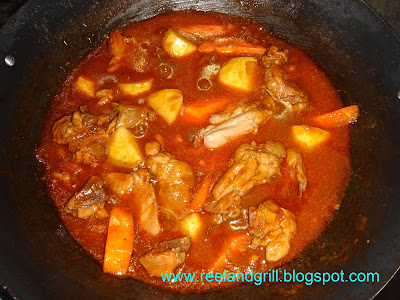 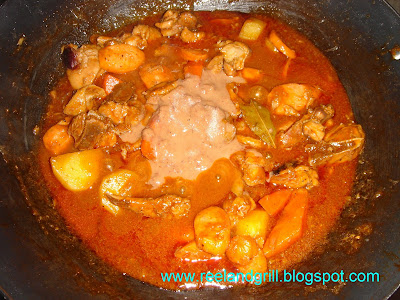 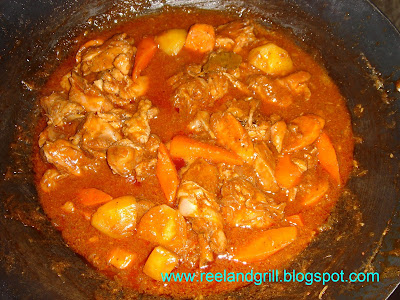 Transfer in a medium bowl and serve with steamed rice. It can also be eaten with crusty bread. Slather the sauce into your rice or bread and eat them along with the succulent chicken meat. What can I say……..but also yummy! :-) 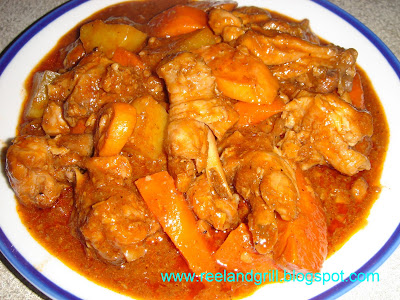 While I remain biased with “beef caldereta” of course, this chicken version of the dish is not bad at all………. distinctly good actually……. worthy of repeat orders. Enjoy! c”,) 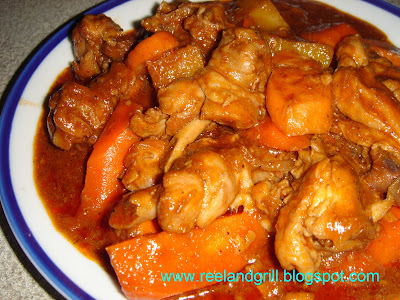