Soup Number 5 or Soup No. 5 or Lanciao (Bull/Ox Gonad Soup) 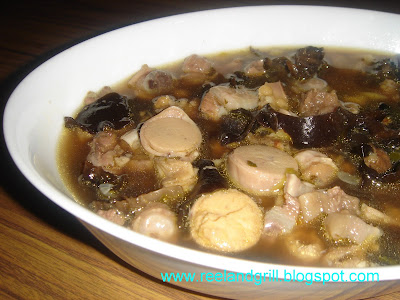 This is my 100th post so I thought I should feature a special cuisine which is authentic and 100% Filipino. A dish that is unique to the Filipino people and its culture. Probably concocted by the common masses and popularized by the same group forming majority of the people. Let’s give way to my version of the infamous Soup Number 5.

First a reminder: Like the Filipino “dinuguan” or pork blood stew, this dish is not for the squeamish or faint-hearted. I have to inform that non-Filipinos may find this dish somewhat unusual or even disturbing to some extent as it may be in conflict with other cultures and traditions. No matter how a bit strange or peculiar this food may be, it has already been part of the distinct Filipino cuisine. It is probably a result of the Filipino ingenuity in cooking; a resourceful way of transforming parts of the meat which others will just throw away into palatable food. In the southern Philippines, this is called “lanciao”. The dish which probably originated from the creative Filipino roadside eateries is believed to have a very potent love potion or aphrodisiac properties. Of course this belief is purely based on claims of those who have eaten the soup and said to have experienced such effect afterwards and not supported by any scientific study.

With such belief that it has properties that stimulate sexual drive, it is expected to be extra popular with male. Particularly for those who prefer the natural ways of attaining sexual enthusiasm than with the help of tablets produced by medical science. But apart from the above, the dish is delicious and truly comforting. The soothing effect will be experienced after every sipping of the soup and eating of the tender and succulent meat.

To prepare the magical dish, we need testicles and phallus from 3 bulls, or about 1½ kilograms of the meat. Additionally, we need a large bone part of a beef to provide the tasty broth which will be the foundation of the soup. In this case, the bone part connected to the tail directly at the back of the cow which is usually attached to the ox tail cut. All the meat should be thoroughly washed and drained. 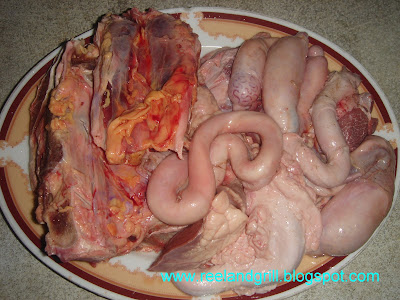 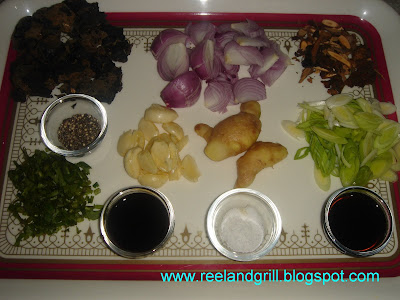 Arrange the meat in a thick large casserole. Cover with enough water and let it boil under high heat. When the liquid is already boiling and scum is appearing bubbly on the surface, carefully lift the casserole and empty all the liquid. Under a running water, washed the meat again to remove all scum that stuck to the meat pieces and that which remains at the bottom of the casserole several times, until totally clean and clear. 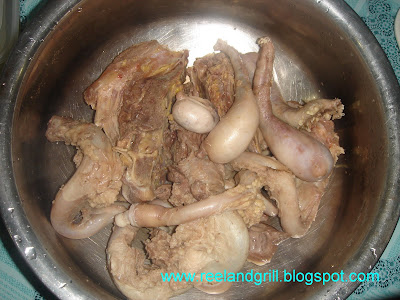 Again, arrange the meat in the casserole, cover with water and simmer in high heat. Scoop out all scum that will further appear until the liquid is clear. This is important to be able to get rid of the foul odor and attain a fragrant and tasty broth.

Adjust the heat to the lowest possible while maintaining the liquid still gurgling. Add the “sibut”, ginger, garlic, onion, salt and crushed pepper corn but set aside about 4 gloves of the garlic, ½ thumb sized-ginger and the chopped onion for sauteing later. Mince the set aside garlic and the ginger. Continue simmering on low heat until the meat is fork tender. Add hot beef broth as required, when the liquid level gets lower than the meat level, one cup at a time. 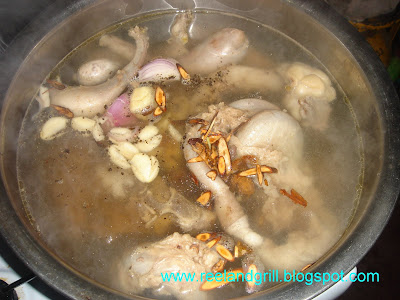 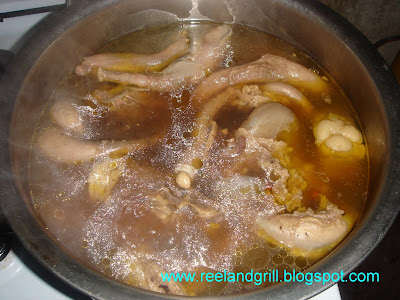 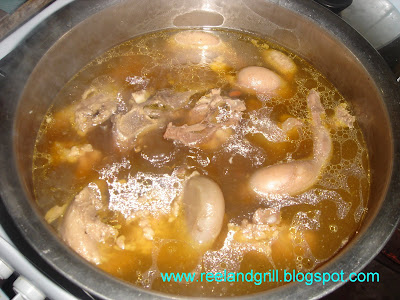 Take out the meat from the broth. Cut the testicles and phallus to small pieces. Detached the meat from the bone and chopped to bite sizes as well. Discard the bone. Strained the broth, and discard all the collected ingredients. Scoop out the oil that float on the surface of the broth and set aside if you want to use it in the sauteing or for some other purposes later on. If you are appalled by animal fat, dispose it as well. 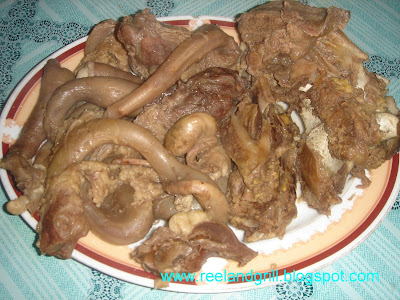 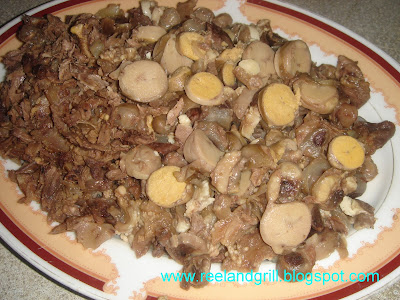 In the same thick casserole, pour back the broth and keep simmering in a very low heat. In a separate wok or pan, heat some 3 tbsp of oil set aside above or alternatively use vegetable oil. Fry the remaining minced garlic, followed by the remaining chopped onion and continue sauteing. Add all the meat and lightly stir to sear the meat until aromatic. Add the “patis” or fish sauce followed by the oyster sauce and continue suateing. 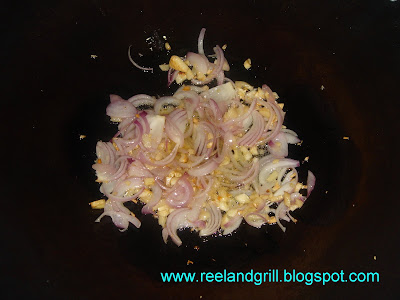 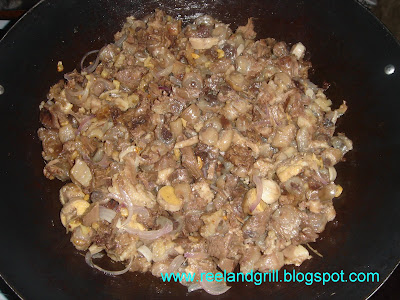 In the boiling broth, transfer back all the sauted meat from the pan and simmer until the liquid is again boiling. Add hot water according to the amount of liquid you desire for the soup. Add the woodear mushroom, leek and continue simmering until the mushroom is cooked through. Add the flat leaf parsley and simmer for a minute more. Taste the broth and adjust the seasonings. 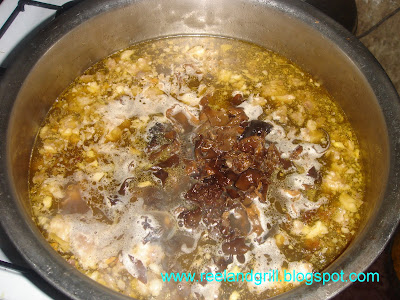 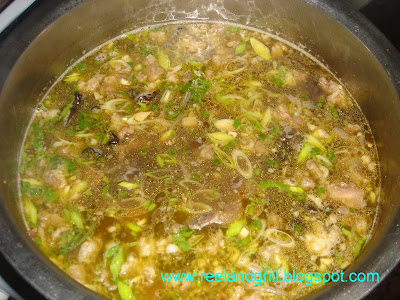 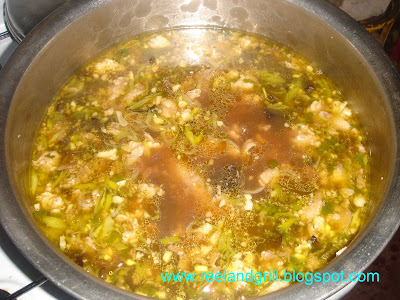 Transfer into a deep bowl, sprinkle with fried minced garlic on top and serve with soy sauce+minced onion+calamondin (“calamansi”) or lemon+chili dip. You can also replace the soy sauce in the dip with “patis” or fish sauce if you desire. Both will be amazingly good. If you have fresh garlic leaves, mince and put some to make the dip even better. This is good! c“,) 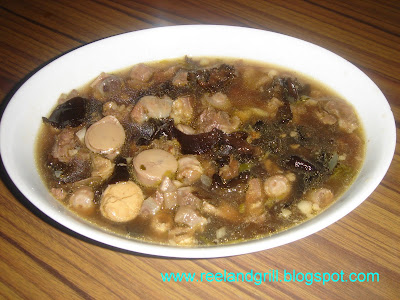 Indulge, be ready for the fabled sexually stimulating effect and feel free to spread love. Enjoy, to the true sense of the word. :-) 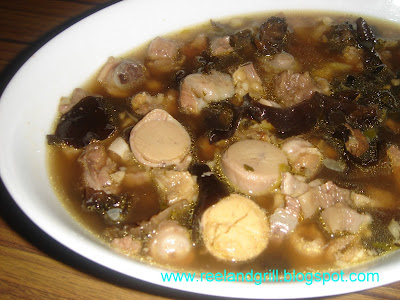